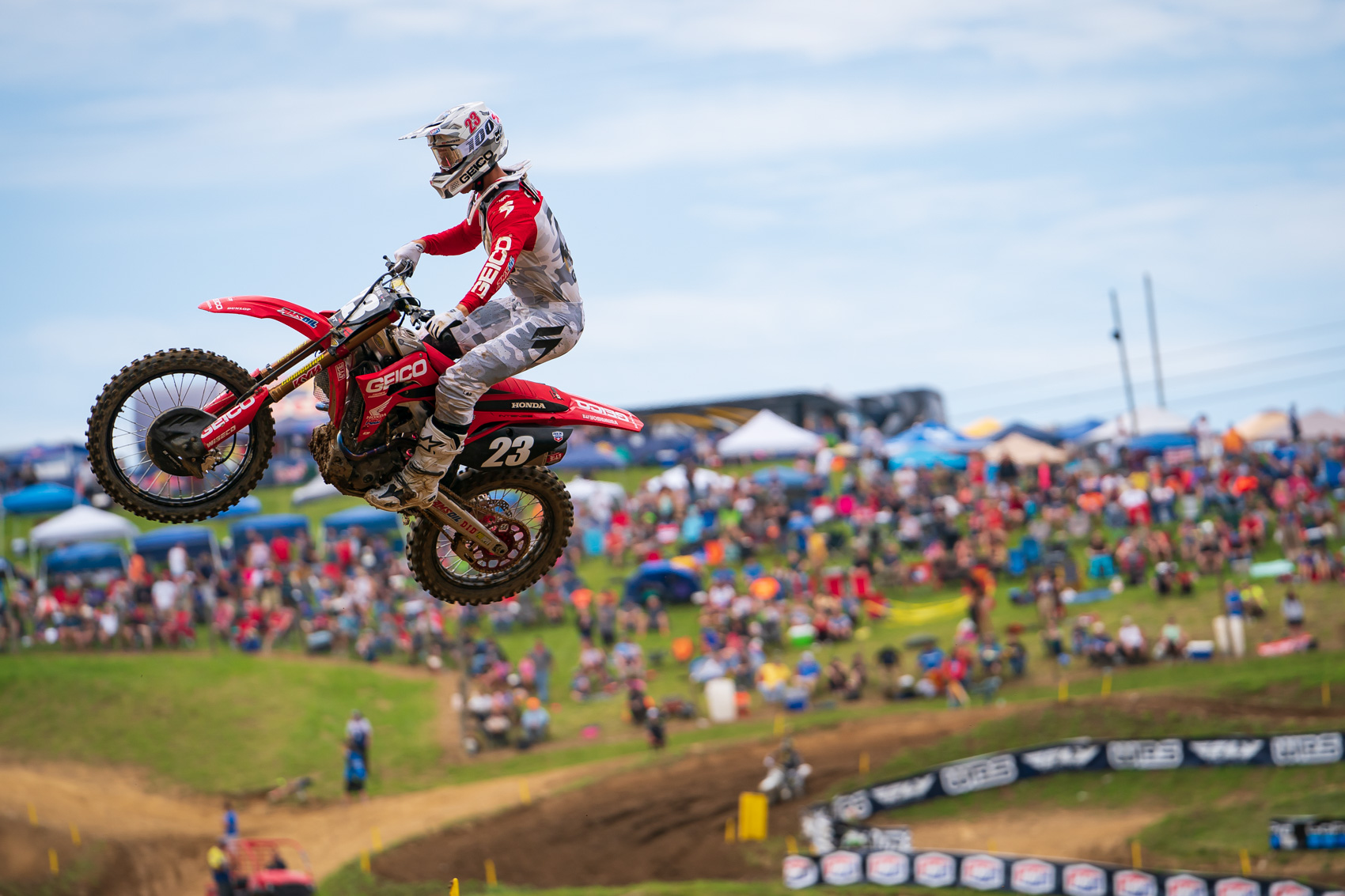 The 2019 High Point Motocross, round four of the 2019 Lucas Oil Pro Motocross Championship, is officially underway. Riders learned the revamped layout of the Pennsylvania circuit during the morning practice sessions and once they figured out the fast lines, went full speed for their shot at the fastest lap time. Due to a timeslot on NBC, the class order has flipped for the day and the 450 class is the first in the schedule, which had the opposite effect on the timesheets than we expected because the front runners in the 250 class were actually quicker.

Jason Anderson has been determined to show he’s a capable outdoor rider and the Rockstar Energy Husqvarna Factory Racing rider did just that with the fastest lap of the 450 class in qualifying, a 2:020.846. He was the only person in the 450 class to dip into the 2:02 range.

Marvin Musquin has improved every round since Fox Raceway and with a 2:03.209 time, the Red Bull KTM rider was second overall in the morning sessions. High Point tends to favor riders with creative line choices and confidence in technical terrain, two things Musquin is known for.

Blake Baggett seems to have shaken the misfortune that followed him through the first three weeks of the summer, and with a 2:03.569 time, the Rocky Mountain ATV-MC/WPS/KTM rider was third overall. This could be a turning point to the season for Baggett, especially after small injuries and issues bothered him during the West Coast run.

Eli Tomac was fourth on the timesheets, thanks to a 2:04.817 lap by the Monster Energy Kawasaki rider. The slide from the top of the championship standings to second place hasn’t seemed to faze the two-time and defending champion. One thing to watch will be how the 2019 KX450 works on the East Coast tracks.

Cooper Webb seems to be coming out of the championship hangover that followed him through the first run of the summer. The Red Bull KTM rider was the fastest in the 450 class during the first round of qualifying and managed to up his pace in the second session, but so did the rest of pack. His best lap, a 2:04.892, put him fifth overall.

The incoming championship leader Ken Roczen was solid in qualifying and a 2:05.032 put him sixth overall.

Even though High Point is Benny Bloss’ first race of the 2019 season, it doesn’t seem like the time off has negatively impacted the Rocky Mountain ATV-MC/WPS/KTM rider. With a 2:05.856 time, Bloss was eighth overall in the 450 class. 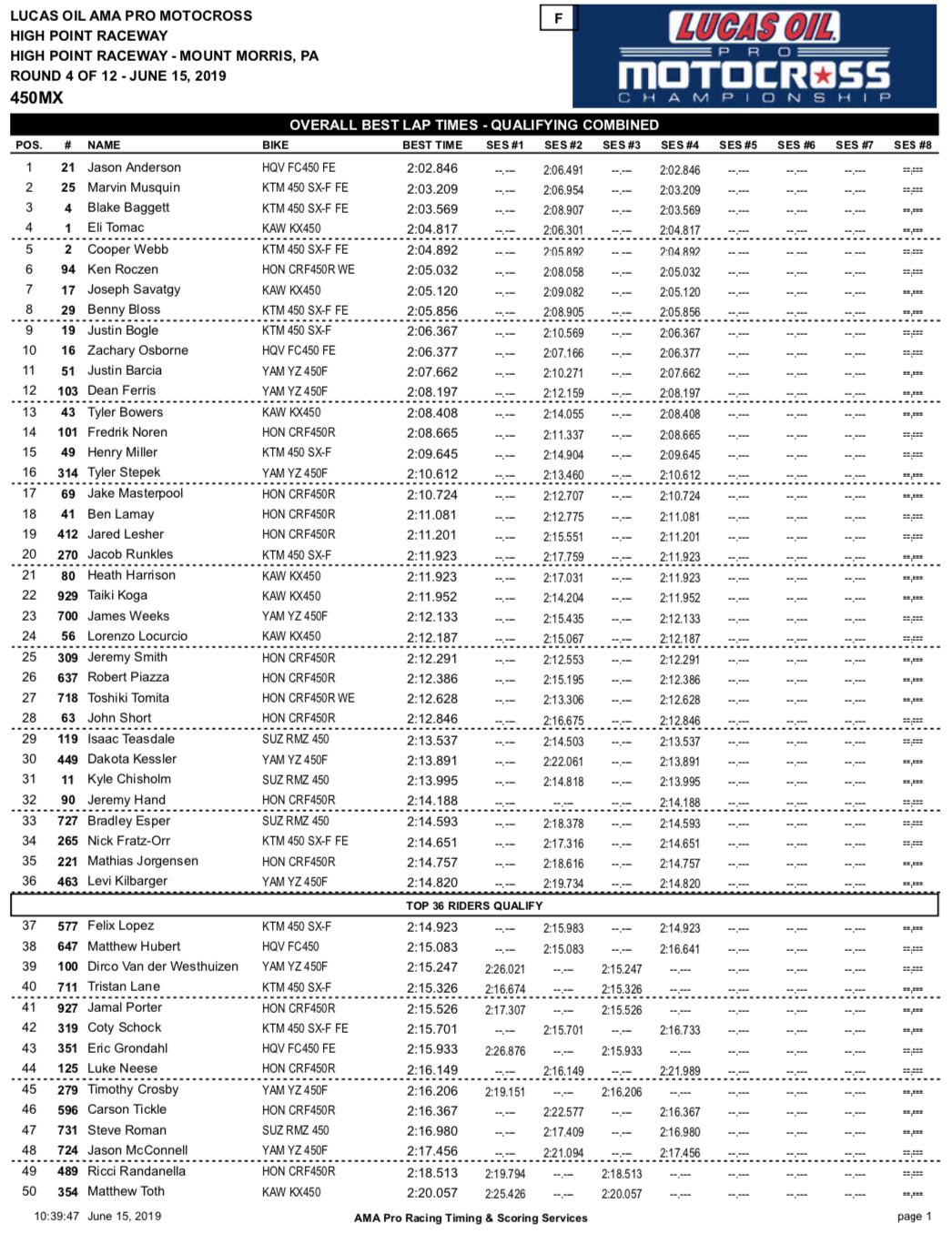 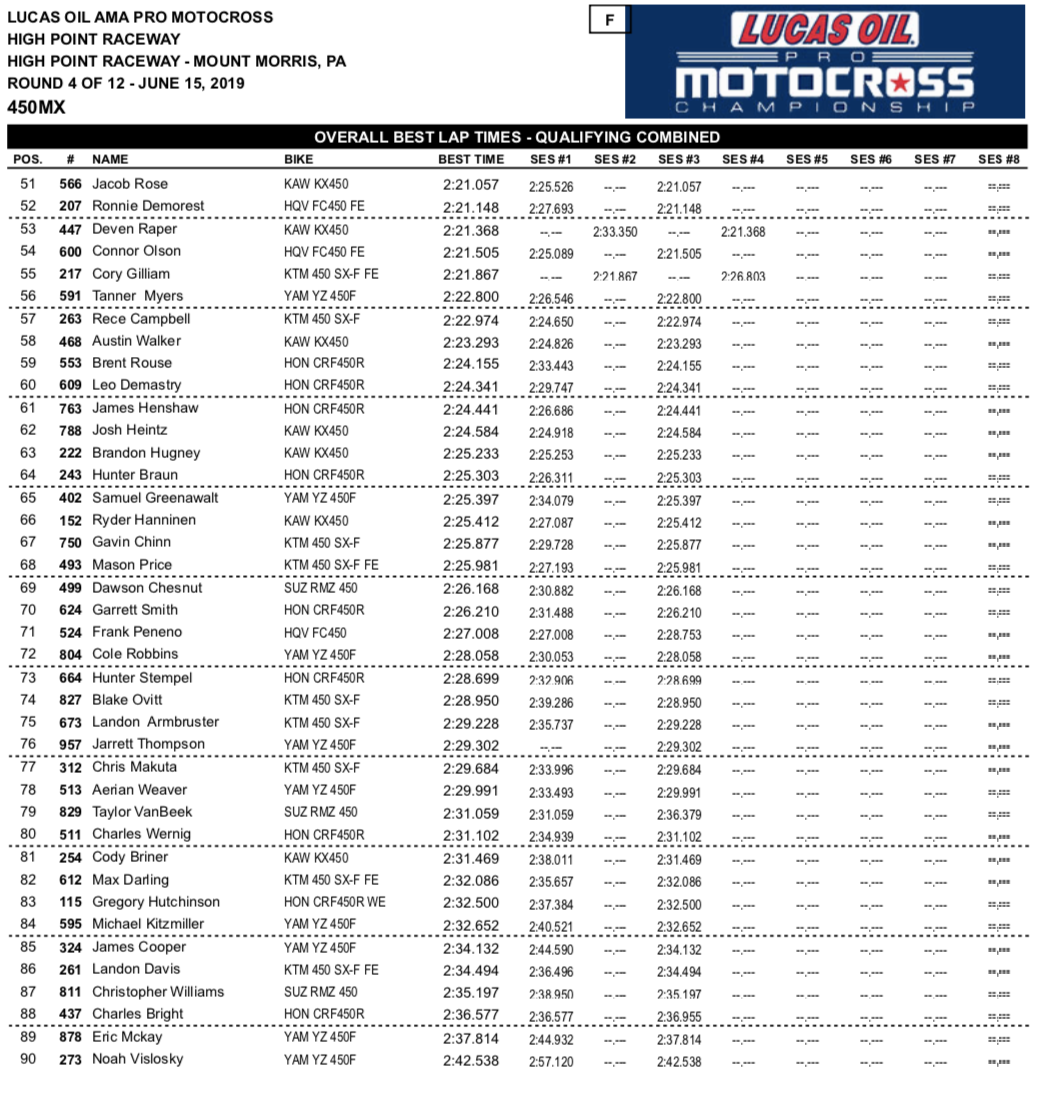 Chase Sexton said that he was eager to get to the East Coast and a look at the lap times shows why. The GEICO Honda rider claimed the top spot in both rounds of 250 class qualifying and his 2:02.698 time was the fastest of the entire field, 450 class included.

Adam Cianciarulo was just a tick off of Sexton’s pace, but that doesn’t seem to be a concern for the incoming 250 championship leader. With a 2:02.720 lap time, the Monster Energy/Pro Circuit/Kawasaki rider was second overall on the final qualifying results.

After a so-so start to the season, Dylan Ferrandis knows the next few races will be crucial to his championship hopes. With a 2:02.765 time, Monster Energy/Star Racing/Yamaha rider was third overall in the 250 class and was the last rider to log a lap under the 2:04 range.

High Point is Hunter Lawrence’s first American MX race on the East Coast and the GEICO Honda seems to have a handle on the conditions already, evident in a 2:04.484 lap that put him fourth overall in the results. 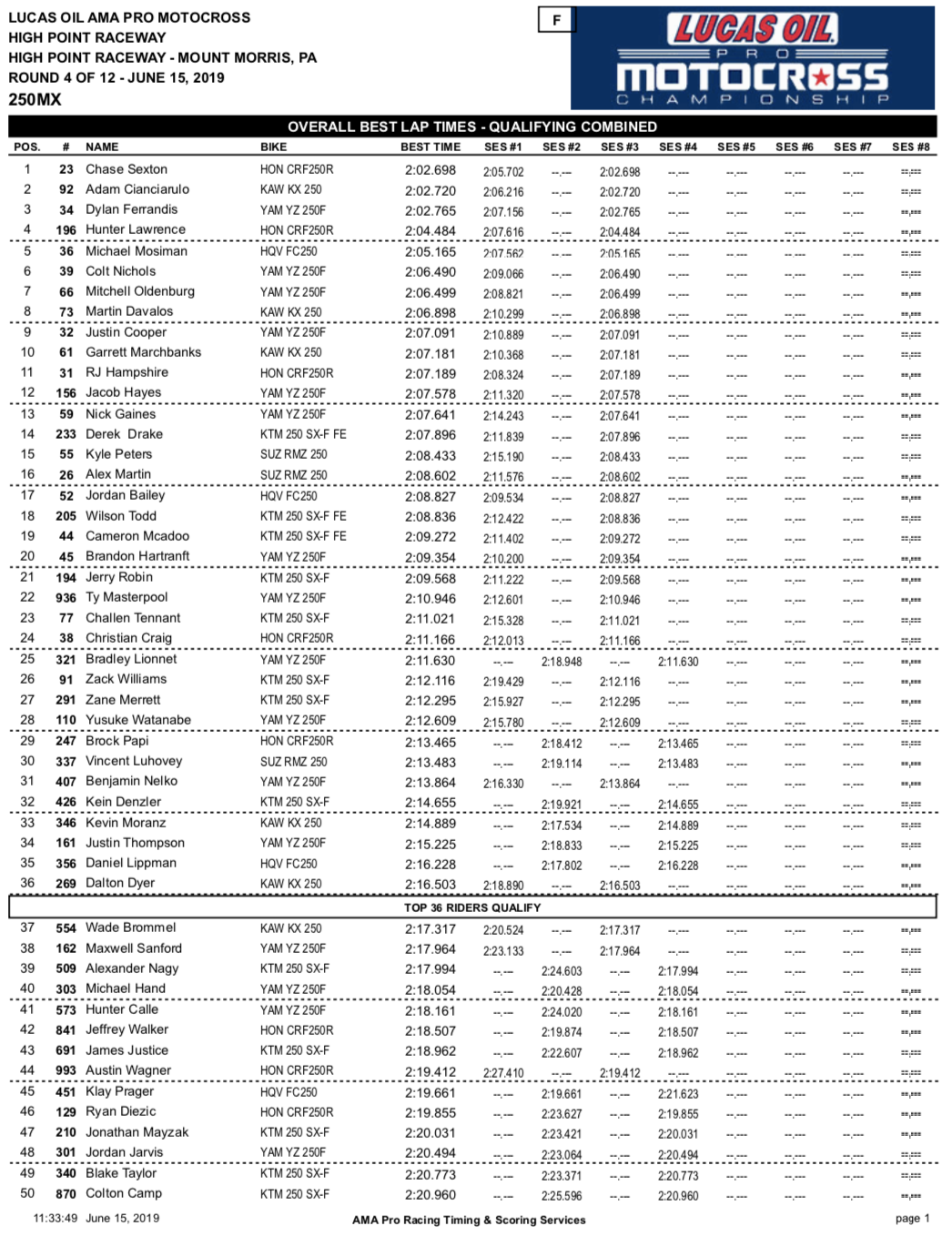 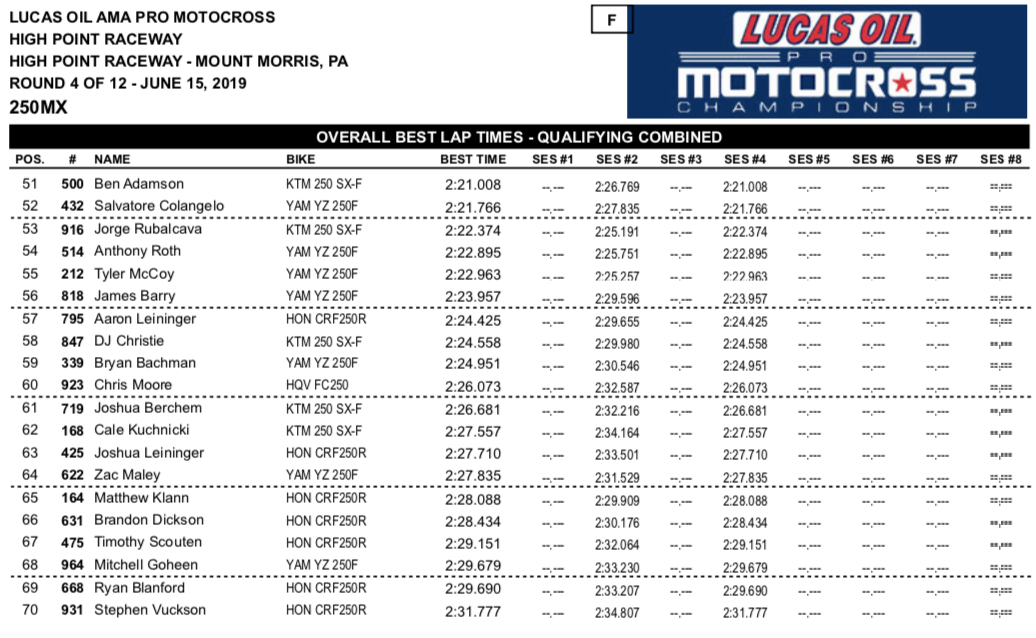