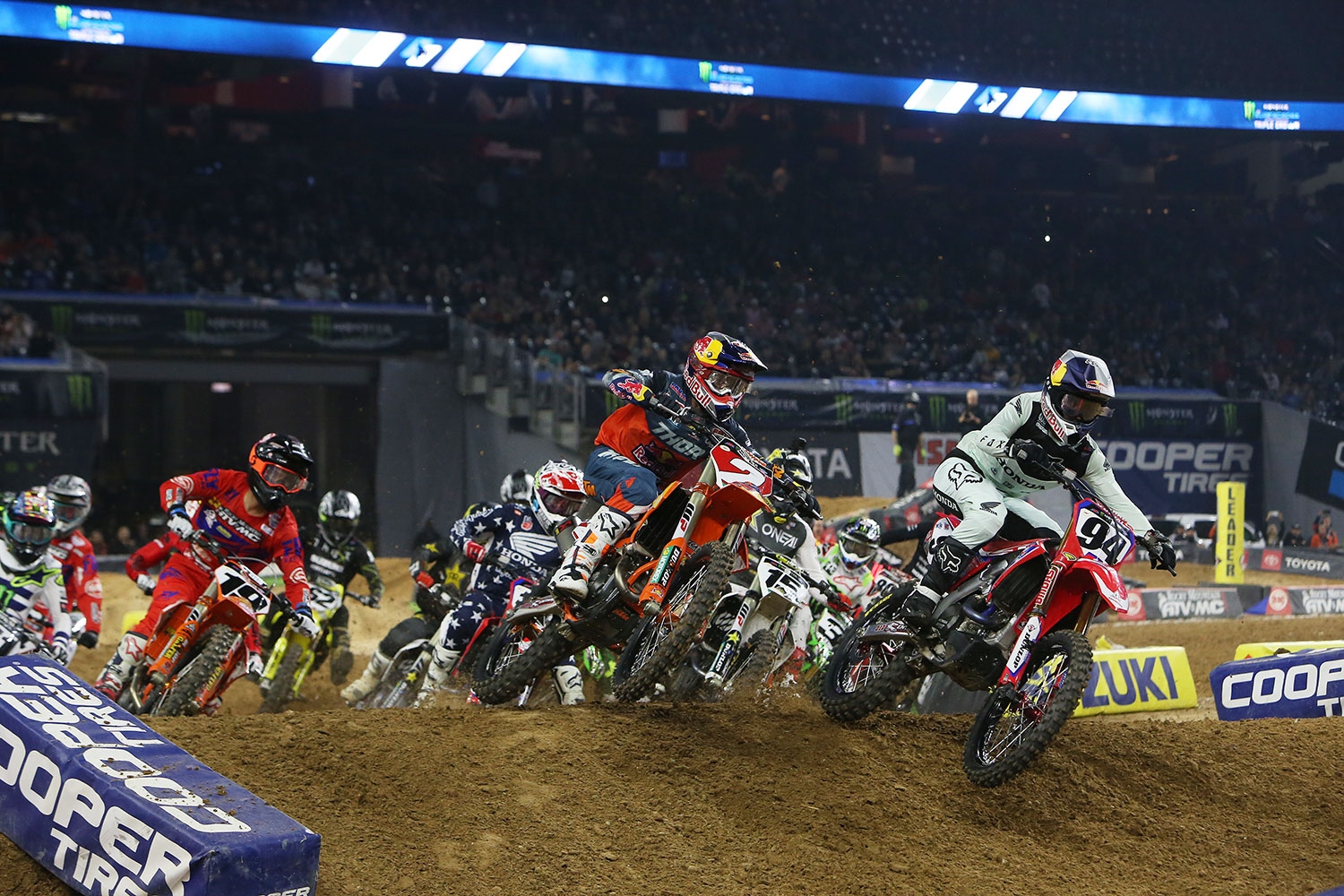 After months of racing, the 2019 Monster Energy Supercross Series is at a crucial point. A handful of riders have staked their claim for the top spots in the 450 class and 250 West Coast class through repeat wins and close yet clean battles, but it’s now time for the true character of each person to be put on display. There are only a handful of chances left in the season to score necessary points and riders will do what they must in order to put a hand on the championship trophy. That was very evident at the 2019 Houston Supercross, the thirteenth round and the final Triple Crown event of the season, as competitors in both classes bumped bars for top spots. If the night in Texas was any indication of what’s to come over the final four rounds, we’re in for a fight.

Dylan Ferrandis did everything necessary to score the second win of his career in Houston. A poor start put the Monster Energy/Star Racing/Yamaha rider deeper in the field during the early laps of race one and he worked to the front of the pack with excellent line choices and well-planned passes to reach second place. Race two was considerably better for the championship contender, as he started in the lead group and soon took over the top spot with a forceful pass on Chris Blose, a move that left the Gas Monkey Energy/AJE Motorsports rider on the ground. Ferrandis went on to win the race and later acknowledged the crash on the podium by saying it was a move he did not like to do. 2-1 scores in the first two races put Ferrandis in control of the results ahead of the third race and this seemed to influence his riding, as he put in the necessary laps to finish second place and claim the overall. This second win, plus difficulties by his title rival, allowed Ferrandis to tighten up the point total in the championship for the two rounds of the season.

RJ Hampshire put his GEICO Honda in the right places at the right times through the night’s three races. Much of race one was spent in a battle with Jimmy Decotis for second place, but his efforts were brushed off by Ferrandis’ aforementioned charge to the runner-up spot. Race two would be much the same for Hampshire, as he stayed in second place for the full moto and finished behind winner Ferrandis, and the 3-2 scores had him in the mix for a solid overall finish. Hampshire finished fourth in the final race of the night, but the early consistent scores against the issues experienced by others helped Hampshire secure second place overall on the night.

Colt Nichols was one surprise of the evening. Seven days after leaving the Seattle track on the medical mule with a cut to his leg that required stitches, the Monster Energy/Star Racing/Yamaha rider was back in action at Houston. Consistent 5-4 finishes in the first two motos put him in contention for an overall podium finish and Nichols confirmed his place with a flag to flag win in the final race of the night. Nichols’ championship shot might be done for this year, but he’s learned a considerable amount for future seasons.

Adam Cianciarulo’s night started off with a dominant win in the first moto. The Monster Energy/Pro Circuit/Kawasaki rider went unchallenged for the full duration of the race, from the first turn to the checkered flag. Unfortunately for the incoming championship leader, things took a turn in the second race when he was bounced off of the track in the first turn and then went down at the landing of the tunnel jump while trying to avoid contact with Sean Cantrell. Due to the blind landing of the obstacle, multiple riders ran into Cianciarulo’s down motorcycle and he was forced to make a quick stop for repairs before rejoining the race. The only positive point of the crash for Cianciarulo was that it occurred early in the race and he was able to spend the remaining time in pursuit of other riders; he would ultimately finish tenth in the moto. The last race of the night was equally eventful for Cianciarulo due to an early crash in the whoops with other racers, but again he worked the full duration of the race to reach third place. 1-10-3 scores out Cianciarulo fourth overall on the night, but he retains control of the championship by five points over Ferrandis. 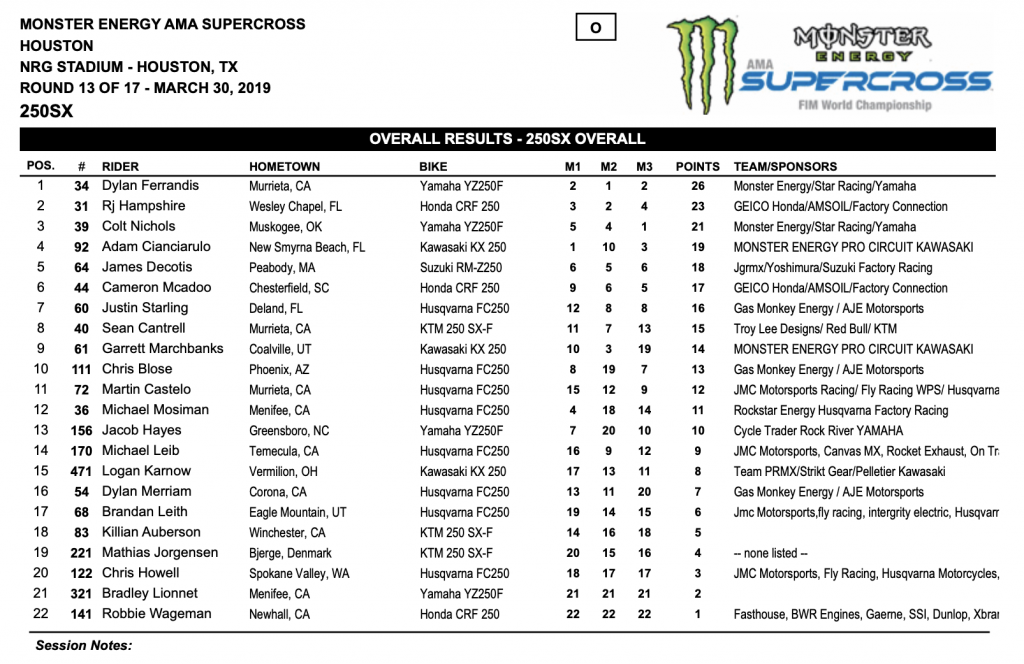 Cooper Webb’s evening was eventful, to say the least. The Red Bull KTM rider got into a tense duel with teammate Marvin Musquin that was marked by multiple block passes, including a final hit that sent Musquin off the track in the sand section. Once clear, Webb went on to finish second place. The second race was much less tense for the championship leader, as he nabbed the holeshot and went on to win the race by a margin of three seconds. With this, Webb was the favorite for the night’s overall ahead of the last race, but a tense battle with Eli Tomac for second place in the moto brought excitement. Webb’s 2-1-3 scores unlocked a number of achievements for the rider, as he won the night’s overall, claimed the Triple Crown championship, and added more points to the gap over Marvin Musquin.

Much of Marvin Musquin’s night was determined by the first moto battle with Webb. The repeated pass attempts by the two riders coalesced in the move that sent Musquin off track. A second, separate incident while trying to pass Dean Wilson for third place put the Red Bull KTM rider off the track in the final laps and he went on to take fifth at the finish, a result that was aided by an at the line pass on Tomac. Race two was equally eventful, but was without Webb’s influence, as Musquin went down in the sand on his own but still finished third place. The issues didn’t seem to faze Musquin, though, because he was nearly flawless in the last race of the night and won by six seconds. That score helped him secure second overall on the night and kept him in the hunt for the championship.

Ken Roczen’s evening started off well, as the fastest qualifier nabbed the win in race one by over eight seconds. Things went sideways for the Team Honda HRC rider at the start of the second moto, as he was caught up in a first-turn incident and injured his ankle, which forced him to pull out of the moto on the opening lap. After an exam from the onsite medics, he was cleared to race the final moto of the night and finished eighth.

Eli Tomac was one of the bigger stories of the race, as the Monster Energy Kawasaki rider was around for some of the pivotal moments for other riders but was never in the mix for a race win. The most perplexing incident was in the final feet of moto one, when he slowed unexpectedly up the face of the triple, a move that let Musquin take fifth place by 0.048 seconds. The final race of the night was the best for Tomac and the second-place finish put him fourth overall on the evening.