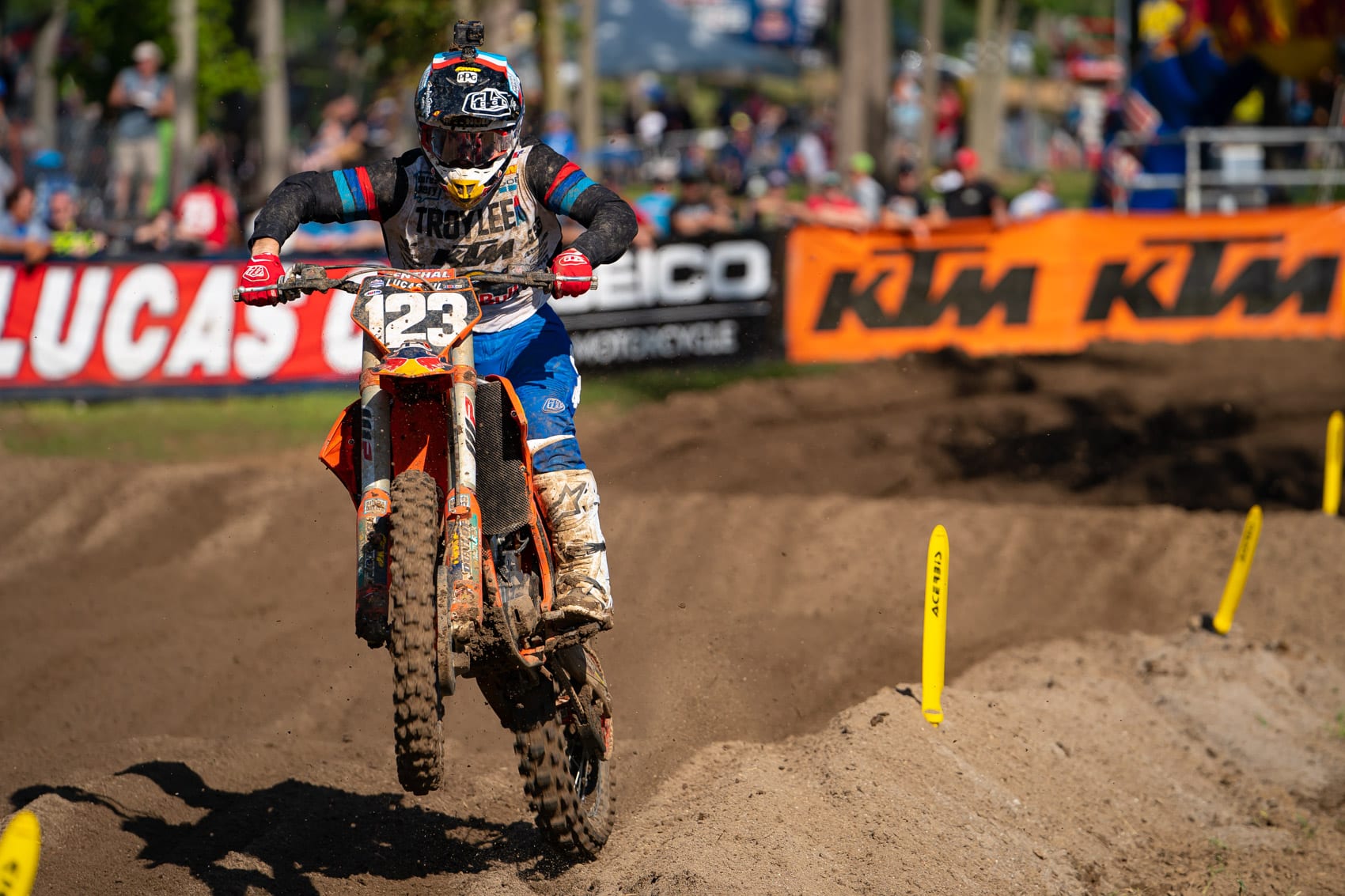 Last GoPro videos of the 2019 Lucas Oil Pro Motocross Championship. We were ready to see the footage when the bikes were still on the track at the 2019 Ironman Motocross, because the twelfth round of the championship looked burly. The layout of the Indiana track underwent massive changes for 2019, the prep allowed countless ruts to form in the dark dirt, and the battles between riders were excellent. Here are the clips from newly crowned 250 MX champion Adam Cianciarulo, Mitchell Falk, and Dean Wilson with some notes and observations…

Cianciarulo got a good start and was at the front of the pack as they funneled toward turn two, but Dylan Ferrandis was quick to attack. Since only a misfortunate incident by Cianciarulo would shift the points to Ferrandis’ favor, the Star Racing rider was eager to get the moto win and let everything play out behind him, hence the cutting pass.

Again, Cianciarulo stayed on the outside lines to maintain momentum and stay out of the same ruts should the other riders tip over and block the path. Cianciarulo was fifth midway through the opening lap, but couldn’t let the pack get too far ahead and went to work on Mitchell Falk. His pass on Falk was textbook because it forced Falk to check up and allowed Cianciarulo to take a smoother, shorter line into the next turn.

The two jumps after the mechanic signal area are well placed and offered options. Riders could scrub and stay low, or hold the throttle and send it to the following small roller. AC opted to stay on the gas and go the distance.

His push to catch and pass Justin Cooper is exciting to watch. For most of the lap, you can see how he closed the gap, stole the position out of a turn, and checked to make sure he pulled clear.

His summer’s work was complete when he crossed the finish line in second place, which was more than enough to clinch the title.

Mitchell Falk went for a gate that put him at the very inside of the first turn and the gamble paid off for the Troy Lee Designs/Red Bull/KTM rider as he came out of pack in the top-five. This was Falk’s last day with the TLD KTM team, so he was in need of a solid ride to impress the managers that set the paddock rosters. All in all, this was a good showing for the teenager and he hung with the pack even after Cooper, Ferrandis, Cianciarulo (interesting to see the opening lap pass from another angle), and Sexton slid by.

Dean Wilson’s footage comes from the last race of the day and it’s interesting to see how rutted the track became and how the tall trees cast shadows over certain areas. The way the Rockstar Energy Husqvarna Factory Racing rider jumped from a small roller over the next obstacles rutted face was crafty and stuff like that is what separates the one-percent from the rest of the world.

That step-down hill has to be one of the gnarliest jumps in the series. The distance from the takeoff to the downside is a good huck, it shoots riders very high, and the landing speed is really fast. We wouldn’t be surprised if the transition at the bottom put a big g-force load on riders and bikes.

Justin Barcia’s pass on Wilson went largely unanswered, but he was sure to fight back on Fredrik Noren and blocked the lines. The camera lens caught some roost mid-way through, but more roost hit the camera later and cleared the glass. Interesting how that always happens.

It must be a weird sense of relief to go over the finish line during the final moto of the year. Did you give enough effort at every opportunity? Will you have a team to ride for the next season? How will you spend the short break before the whole cycle starts again?

2019 Ironman Motocross | How Was Your Weekend