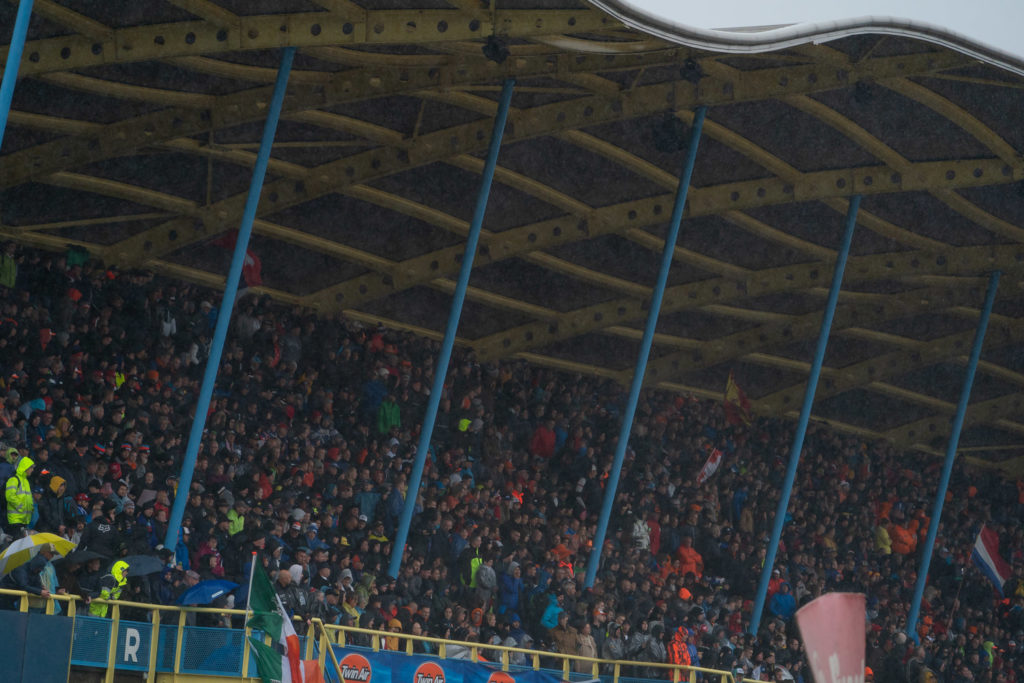 Three days at a race track, in another country, with people from around the world, in the rain. It’s a lot to take in and process, but here we are. We’re still trying to dry off and shake the sand out of our hair from the 2019 Motocross of Nations while waiting for a pair of flights from Amsterdam back to the United States. Here’s Kickstart from the weekend. It’s a little different than past installments, but what you want to see is still there. We’ll have more later on, so click around and come back every day for more from Assen.

There was a big initiative to Team USA’s participation at this year’s race. Recent runnings of the MXON have not gone great for the Americans, especially compared to their dominance in past decades, so all three riders and their support staff decided to attack the race with weeks of testing at sand tracks throughout Europe. The American branch of Rockstar Energy Husqvarna Factory Racing was assisted by ICEONE Racing and Monster Energy/Star Racing/Yamaha was aided by Monster Energy Kemea Yamaha for the extended stay, plus onsite support at the MXON. No, it wasn’t exactly their usual race rigs or program, but it was pretty damn close and that helped everyone stay focused on the task at hand, which was to get Team USA on the podium.

The random lottery that determines gate pick for Saturday’s qualifying motos can set the tone for the rest of the weekend. Get a good number and all three riders get the chance to grab the best gates on the line, while a bad number increases the odds of a bad start or mayhem with riders from slower nations. When the Monster Energy models and the FIM revealed that the USA would have pick 31, you could feel the mood in the room change. The Europeans became a little more optimistic that they would keep the Americans at bay, even when their picks weren’t much better.

With all that said, things looked promising on Saturday afternoon. Justin Cooper was the top rider in the MX2 class thanks to the fastest lap time in Free Practice and a holeshot to dominate win in the Qualifying Moto, Jason Anderson made massive changes to his bike setup (triple clamp, suspension, gearing, and so forth) from practice to qualifying and finished sixth in the MXGP race. Zach Osborne’s pace was good in the race and with some slight issues he crossed the line eighth in the Open race; his finish was the team’s dropped score on Saturday and they were awarded third and twenty-third gate pick in Sunday’s races.

While rain pelted the clear tent that served as a home base for Osborne and Anderson, the two joked about the weather but didn’t let on a sense of concern. Osborne said he’d rather race in the humidity of central Florida than the cold of Europe, while Anderson laughed and quickly geared up for their early warm-up. A few feet away in the Kemea truck Cooper got ready on his own and chatted with the team, all with quiet confidence from Saturday’s win. They had all watched the carnage of the B Final and didn’t want to make the work even harder than it always was.

We all know what happened by now. Anderson and Cooper aced their starts in Moto One (MXGP & MX2) and were around the top-10 three turns into the 30-minute battle. Things quickly went awry when Cooper leaned left to avoid Gautier Paulin in the long wave sections, went right into Anderson’s path, and took them both down. Neither knew they ran into each other until long after the race, as they just tried to get back on the bikes as quickly as possible. Anderson’s right radiator shroud hung on by a few bolts for the rest of the race and he worked back from almost last to 17th. Cooper wasn’t so lucky, as he had to free himself from underneath the bike and assess the damage: the front brake lever was bent into a U, the clutch assembly was snapped free from the handlebars and rendered useless, and the knuckles on his left hand were busted open and likely fractured. He jammed the bike into gear, went the rest of the race without the use of the clutch, and ended up 25th.

Moto Two (MX2 & Open) saw mixed results from the Americans. Osborne knew that the weight of the team was on his shoulders, especially because Cooper’s hand was already swollen and barely able to operate the clutch, and the Open class rider to the occasion with an impressive fifth-place finish against sand specialists Glenn Coldenhoff, Pauls Jonass, Shaun Simpson, and Harri Kullas. This wound up being the best single finish of the American team on Sunday afternoon, and against the wild results of other teams, gave a slight glimmer of hope that a top-five overall could still be possible. After an injection for the injury from the team doctor, Cooper went the full duration of the moto and netted a 29th place result; it was an honorable effort, even though it would be the dropped score later in the day.

It had to be tough to line up for the last race of the weekend. Moto Three (MXGP & Open) was a full field of 450 riders, many of them being past race winners in the MXGP series and more than capable of riding in the sand. Neither Anderson or Osborne gave off a sense of concern and instead intended to do whatever they could to get in the mix for spots in the top-ten. The two were side by side and towards the front of the field when they exited the first turn, a best-case scenario considering the day thus far. Anderson went on to an eighth-place result, a score that was impacted by late passes from Jorge Prado and Jeffrey Herlings. Osborne, meanwhile, made a mistake in the early laps, allowed some riders to get around him, and had to stop for fresh goggles late in the race; he hustled back to 13th at the finish.

When the final scores were tallied, Team USA was ranked sixth overall. Though they technically tied with France at 68 points, Cooper’s dropped score (28) was worse than Paulin’s (23), and that was the determining factor.

Hours later the crew met up for a final team dinner in the Alpinestars hospitality rig, all of whom felt relieved the race was over, accomplished for their effort, and eager to try again should they be given the opportunity. All three riders expressed interest in coming back for another chance as a team and said that they’d cherish the experience for the rest of their lives. Is that just as good as a win? You be the judge.

2019 Motocross Of Nations | How Was Your Weekend
Michael Antonovich September 30, 2019

2019 Motocross Of Nations | How Was Your Saturday
Michael Antonovich September 28, 2019

2019 Motocross Of Nations | How Was Your Weekend

2019 Motocross Of Nations | How Was Your Saturday