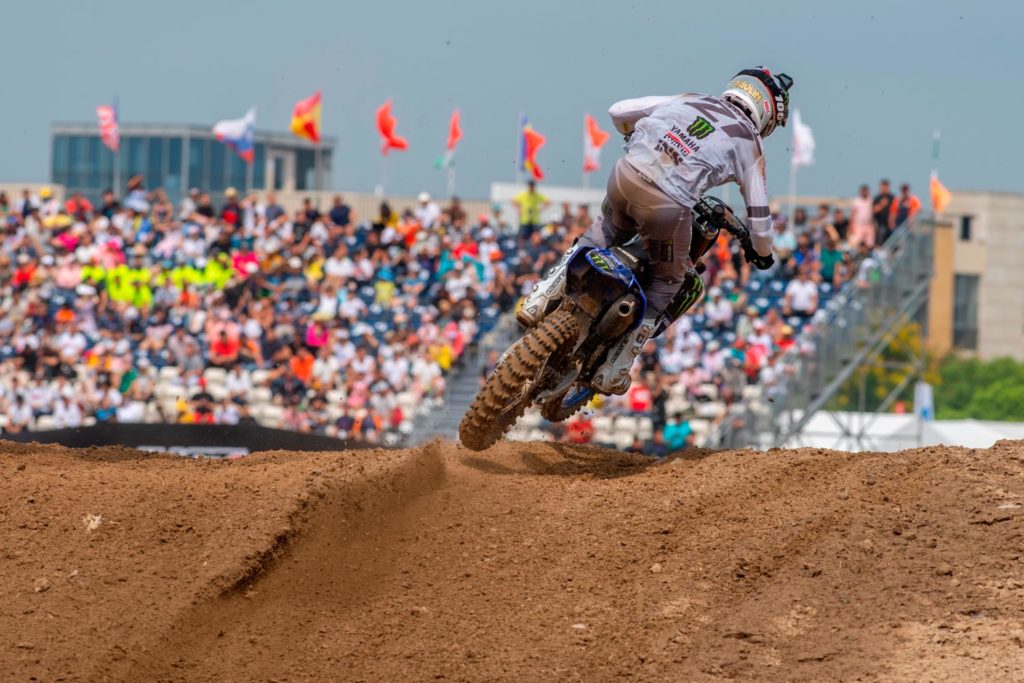 We were happy to see GoPro videos from the 2019 MXGP of China posted on YouTube. The camera company doesn’t send someone to some of the far-flung races on the Monster Energy FIM Motocross World Championship, and that means a lack of footage from a rider’s point of view. Luckily, someone made sure to stick a Hero 7 to the top of Gautier Paulin’s helmet for the last two motos of the long season and we are able to see what laps were like on the all-new track that was built just outside of Shanghai.

aulin was able to hold his own with a good start and stayed within the top-10 even after a few riders cut tighter lines through the first turns and got a little frisky up the face of the first obstacle. Both Paulin and Jeffrey Hurlings failed to clear the first big jump and casing the landing caused both to lose some forward momentum and ground to Pauls Jonass, until Jonass made mistakes of his own a split-second later and handed Herlings back a position.

The MXGP class is known for intensity the moment the gate drops and it seemed like Paulin was a bit unprepared on the opening lap, as he allowed a handful fo riders to get around in the first lanes of track. Once he regrouped and settled in, he got into an excellent battle with Jeremy VanHorbeek for eighth place. The two exchanged passes over the course of a few laps, when Paulin favored flowing lines and momentum while VanHorebeek stayed tight through turns and plotted the shortest route possible. It was an excellent display of skill and speed from the two and proved that there’s more than one way around the track.

There were plenty of pre-race concerns about the Shanghai circuit, mostly because we saw or heard little about the purpose-built venue prior to the weekend. To everyone’s surprise and relief, a very long and challenging layout was constructed from soft sandy-like soil on the flat ground, with slight dips and big humps added in for “elevation.” This looks like it would be a pretty fun place to turns laps, as long as you didn’t have to worry about landing on the slower local riders.

A similar start puts Paulin in the bottom half of the top-ten and he took on a face full of roost over the first few jumps. The track changed greatly over the course of the day, especially when one considers there were only two classes with half-full gates. The one thing that we’ve been intrigued by in the modern MXGP class is the way that some riders mimic lines from MotoGP. Instead of the direct point and shoot style of the US series, the Europeans plot paths from one side of a lane to the complete opposite, all in pursuit of the smoothest or fastest route.

The mid-race duel with Jonass is excellent. Both riders wanted to end their series with a good finish and went all-out on the track, which was not an easy feat considering the ruts, bumps, and numerous lapped riders. Paulin did damn near everything he could to close ground and make the move, even if some of the moves were a bit risky. In the end, it was worthwhile because he made the pass and went on to finish the race in sixth place.