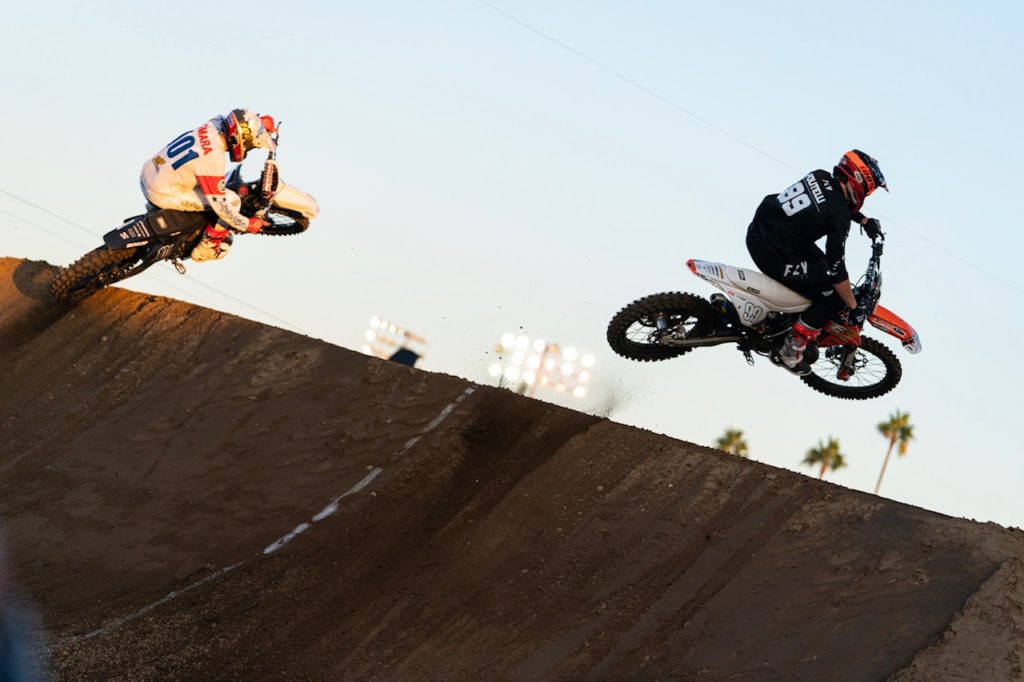 The typical smog over Southern California was replaced by premix smoke on the first Saturday night of October, thanks to the Red Bull Straight Rhythm motocross event at Pomona’s Fairplex venue. The wildly popular event saw one of the best competitor lineups in years, with dozens of riders and teams getting into the spirit of a bygone motocross era through race-ready two-stroke motorcycles and gear that paid tribute to past stars of the sport. It took some time for riders to re-learn the powerbands of the snappy bikes, but before long they had the half-mile long track memorized and treated fans to exciting head-to-head battles across three classes determined by engine displacement (125cc, 250cc, 500cc). 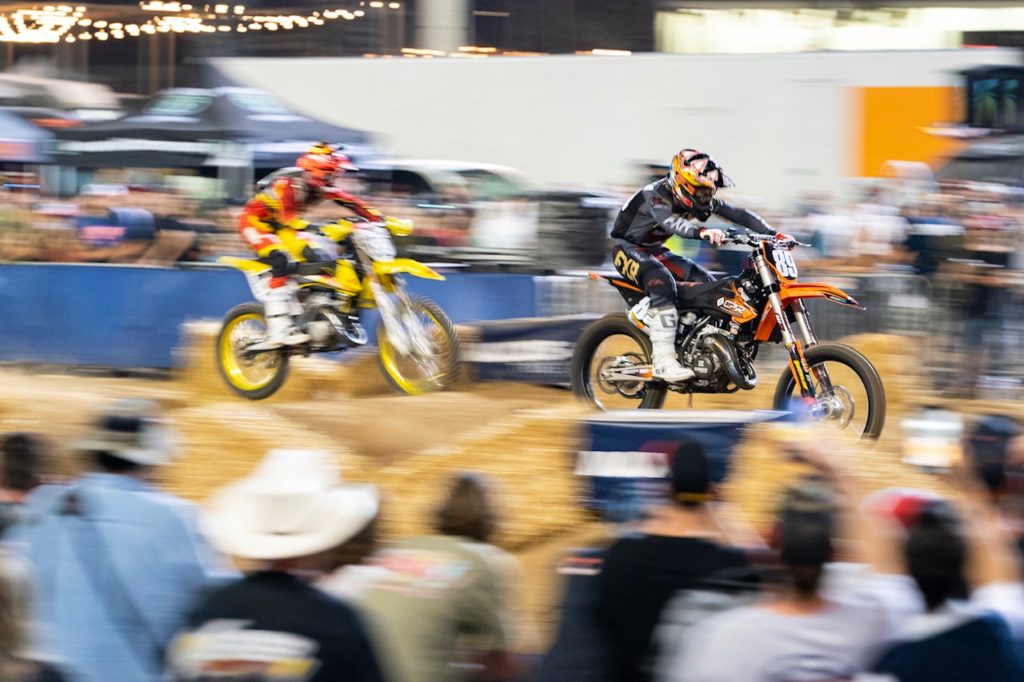 Joey Crown, AJ Catanzaro, Max Vohland, and Michael Leib emerged from the first round of the small-bore bracket as the contender for the class win. Vohland, a teenager from a family with a racing legacy, whipped and scrubbed his bike over nearly every obstacle with a riding style that no one in the 1990s could have imagined and Joey Crown charged down the track with aggression that sometimes put him on the fine line of disaster. AJ Catanzaro’s tribute to Travis Pastrana was complete with a custom graphic set that made his modern KTM look like a 2000 Suzuki and had an original No Fear chest protector to match, while Michael Leib built an early 2000s Honda and gear that was in the spirit of Ernesto Fonseca’s time at Factory Honda.

Things got interesting the semi-finals. A near-crash was a highlight to the Crown-Catanzaro faceoff; in the spirit of Travis Pastrana, Catanzaro made a massive mistake over one of the jumps and was nearly ejected from the motorcycle. But instead of bailing out, Catanzaro held on and pinned the throttle to ride out the mistake to the massive cheers of the crowd. As impressive as it was, Crown still managed to advance to the finals. The Vohland-Leib battle only went one round, as a hard crash in the whoops by Vohland just feet from the finish line left the race with a sore arm and he was unable to continue the night’s event. With this, Leib advanced to the final.

The last race of the 125cc bracket showed how one mistake isn’t always the end of the race. Crown shorted a jump in the early part of the track and lost some time to Lieb, but upped his intensity through the final quarter-mile, closed the gap, and nabbed the overall win at the finish line. “I screwed up the step-up in the middle a couple of times and I thought I was going to give it to Leib, but I kept fighting,” shared Crown on the podium. “I got the dragon’s back really clean that lap, was able to reel him back in, got through the whoops decent, and came away with the win. I’m stoked!” 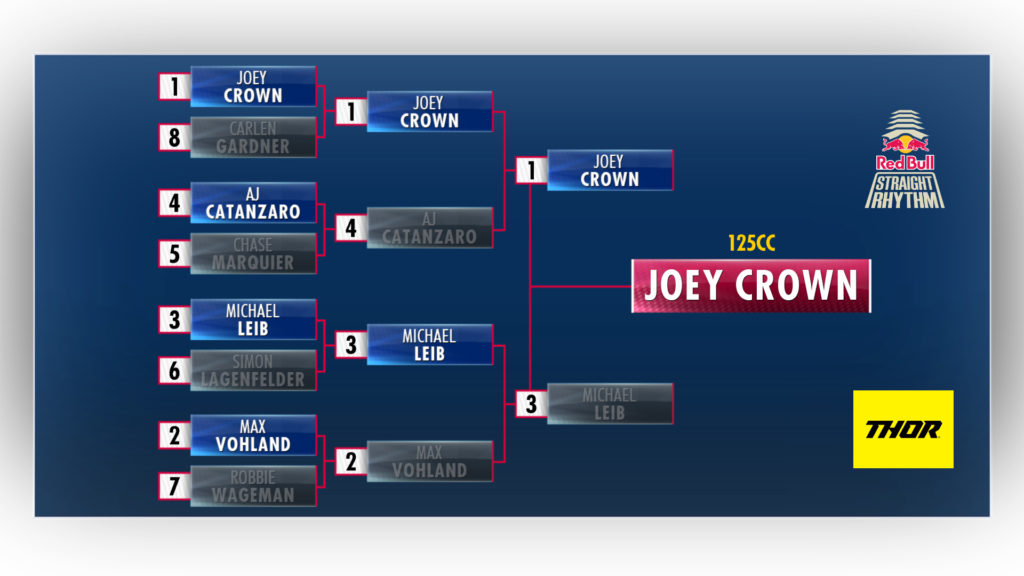 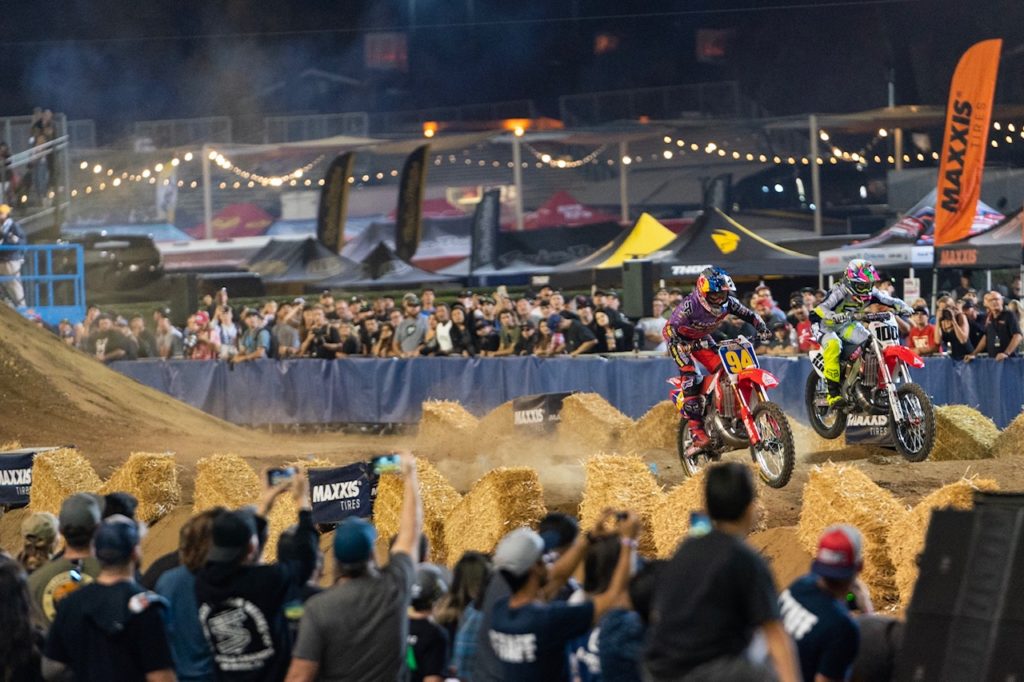 With sixteen riders in the head-to-head bracket, fans knew they were in for close battles from the first race to the very last. The format paired the fastest qualifiers to the slowest qualifiers, which resulted in some dominant wins, but when the riders were closer in speed things got much closer and upsets occurred. Pre-race favorites Ryan Villopoto and Ronnie Mac were eliminated from the race in the first round by Parker Mashburn and Pierce Brown, while Cooper Webb saw his night end after two big wins by Brown in the quarterfinals. Temperamental jetting of the carburetor forced Cole Seely to call it quits in the middle of his run against Josh Hansen, Ken Roczen slayed Ryan Sipes in two races, and Brandon Hartranft steadily worked his through the field with near-flawless runs. All of this set the stage for the semi-finals and championship-deciding rounds.

It was a battle of teammates in the semi-finals, as Troy Lee Designs/Red Bull/KTM new hires Brown and Hartranft squared off while Team Honda HRC’s Roczen and Hansen went to work on each other. Hartranft’s all-out speed was evident in the deciding run against Brown, because even after a small mistake early in the track, he managed to regroup, cleanly clear all of the jumps, and logged what was the fastest lap to that point in the night. With that, he advanced to the final. Roczen and Hansen kept the crowd entertained with their smooth riding styles and stunning whoop speed; Roczen ultimately had the better drive over the rollers and advanced to the final after two quick matches against Hansen.

Hansen and Brown’s race for third was one of the more interesting of the night. After a win in run one, Hansen made a mistake while waiting for the gate to drop and put a hand in the air as a request for extra time. The officials didn’t see it soon enough and dropped the gate, which allowed Brown to tie the score at one-one. Hansen took a moment to gather himself back in for the final match against Brown, put in a big jump combination, and bested the young rider for the third-place finish.

The Roczen and Hartranft pairing was one that few would have expected at the start of the night, but it soon became clear that the two were the fastest in the field. They stayed bar-to-bar for the full length of the half-mile track, with nary a mistake between the two. It came down the last few inches in both races, with Roczen ahead both times to take the overall win. “The lineup was really strong and I knew it was going to be a long road to the finals. It came together piece by piece and we made our way to the final against Bradon,” shared Roczen on the podium. “I had a blast out here, it was amazing. I’m glad to bring victory home for Honda, this is a 2006 bike and the last time it was on the podium was when Jeremy McGrath got a holeshot on it. I’m glad to be the last guy to win on it!” 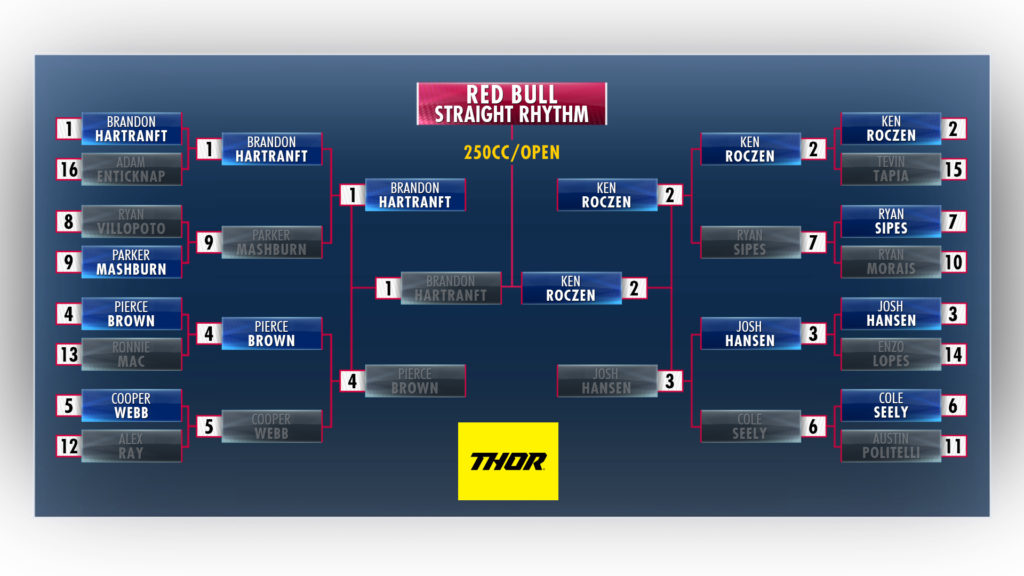 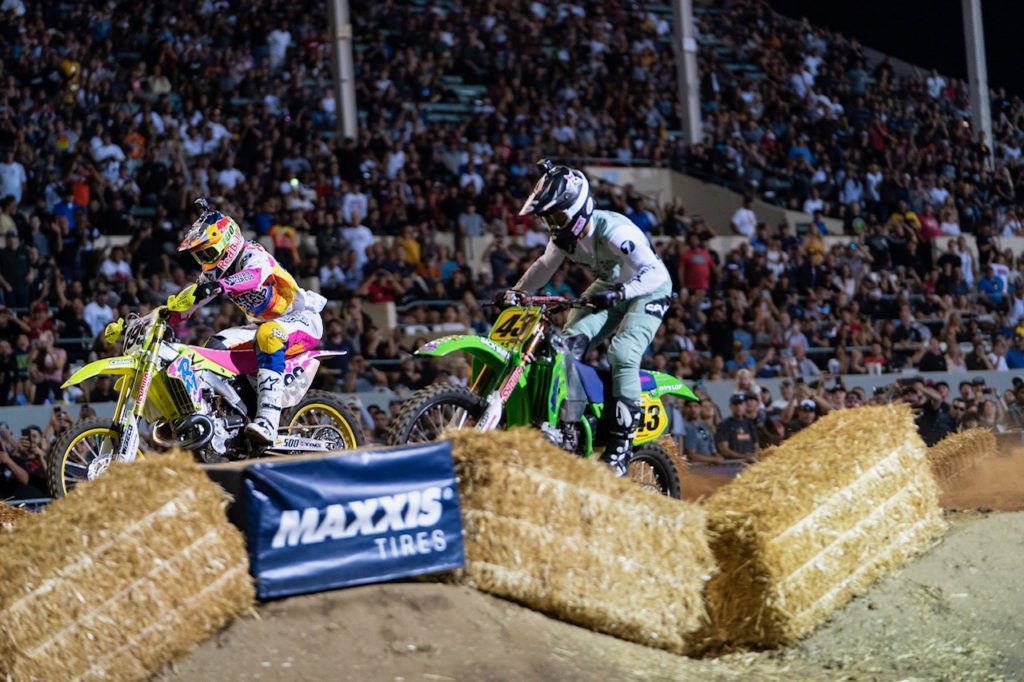 It takes a certain set of skills to bull-ride a decades-old 500cc motorcycle down a Supercross-style track and few have the determination to do so. That made the showdown between Travis Pastrana and Tyler Bowers one of the night’s most anticipated events and they delivered with three thrilling runs. Pastrana was aboard a custom creation that saw an old Suzuki RM 500 engine wedged into a modern aluminum frame, while Bowers lined up with an early 1990s Kawasaki KX500 that looked like it was pulled out of a dark corner in the factory race shop. The first of their three runs went to Pastrana, which was a very popular win with the crowd, but Bowers bounced back and took advantage of a mistake to tie the score in the second run. With everything on the line in the last one, the two unleashed the full power of the big-bore bikes and charged their way down the track. Since Pastrana’s racing days ended before the scrub technique was common, he used his own method to stay low over the speed check jumps: a backflip. And it worked! By staying slightly lower to the ground, Pastrana was able to land quicker than Bowers and the two were even in the final few meters of the race. In the end, Bowers’ bested Pastrana by a narrow margin to take the win, but later admitted he didn’t know how the race would go. “It was wild. I’m kind of just happy to be alive [Laughs]. My main goal was to live on my KX500 and I was against this psycho that was doing flips the whole time, getting loose in the whoops, and sideways off the lip of the finish line. He was really sending it,” exclaimed Bowers at the end of the night. “To win against Travis Pastrana, on a 500, at a Supercross track with no turns, it’s mind-blowing.”

2019 Red Bull Straight Rhythm | How Was Your Weekend