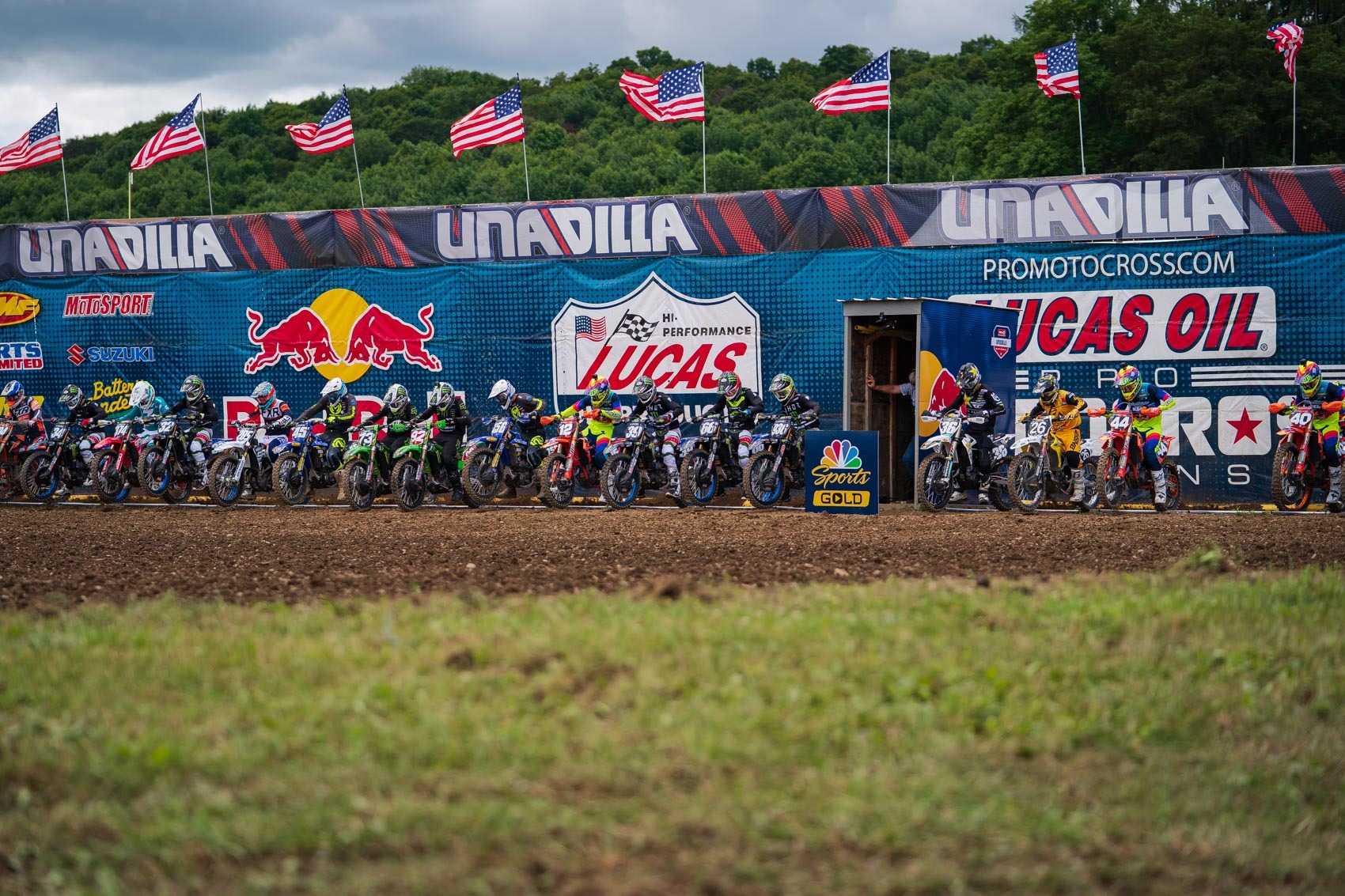 This year’s running of the Unadilla MX National marked the 50th anniversary of the legendary American motocross track, but it was two foreign riders who swept the racing on the upstate New York circuit. Germany’s Ken Roczen and France’s Dylan Ferrandis came home with the wins in the 450 and 250 classes, respectively. For Team Honda HRC’s Roczen, his third win of the season came in dominant 1-1 fashion, as he was clearly the cream of the crop from the first lap of the day as he was also the day’s fastest qualifier with a rather sizeable margin. In the 250 division, Ferrandis traded moto wins with rival Adam Cianciarulo and earned equal points, but his win in the second moto gave him the nod in the overall standings and the place in the record books. Rain in the early morning left the track in prime condition for the afternoon motos, and the fans on hand were certainly treated to some spectacular racing action.

Monster Energy/Star Racing/Yamaha’s Justin Cooper snared the holeshot when the gate dropped on the first moto of the day, and the home state racer was shadowed by points leader Cianciarulo, local Jerry Robin, and Ferrandis. Cooper controlled the race at the front of the pack for nearly half of the race, keeping Cianciarulo at bay while Ferrandis found his way past Robin and into third. It all went wrong for the leader in a sweeping uphill right-hander as Cooper lost his rear end in some rollers and swapped out of the lead. AC took over at the point with Ferrandis in tow, but he opened up a moderate lead by the end of the moto and earned his seventh moto win of the year on his Monster Energy/Pro Circuit/Kawasaki. Ferrandis was third, well ahead of third-placed Chase Sexton and Cooper, who worked back to fourth after his earlier crash.

Ferrandis was unbeatable off the line in the second moto and he led the way through the first corner aboard his Monster Energy/Star Racing/Yamaha with his teammate Cooper, Cianciarulo, and JGR MX Suzuki’s Kyle Peters in tow. Cooper let it all hang out on the opening lap and made a serious bid for the lead, but Ferrandis matched his intensity and managed to stay at the point. Cianciarulo forced his way past Cooper before the first lap was over and latched onto the rear end of Ferrandis’ Yamaha, but was never able to make a pass happen. The lead duo was never separated by more than a few seconds throughout the second moto, and they ended the day with even points having traded the moto wins. 28 points separate Ferrandis and Cianciarulo with two rounds left in the championship. GEICO Honda’s Sexton was third at the finish, well ahead of Cooper. Sexton earned the third spot on the podium with 3-3 scores.

“Today the track was really nice and rough, and it was one of the most difficulty dry tracks I have ever ridden,” said Ferrandis. “The bike setup was not perfect in the first moto but we made some good changes for moto two and we had a good race.” 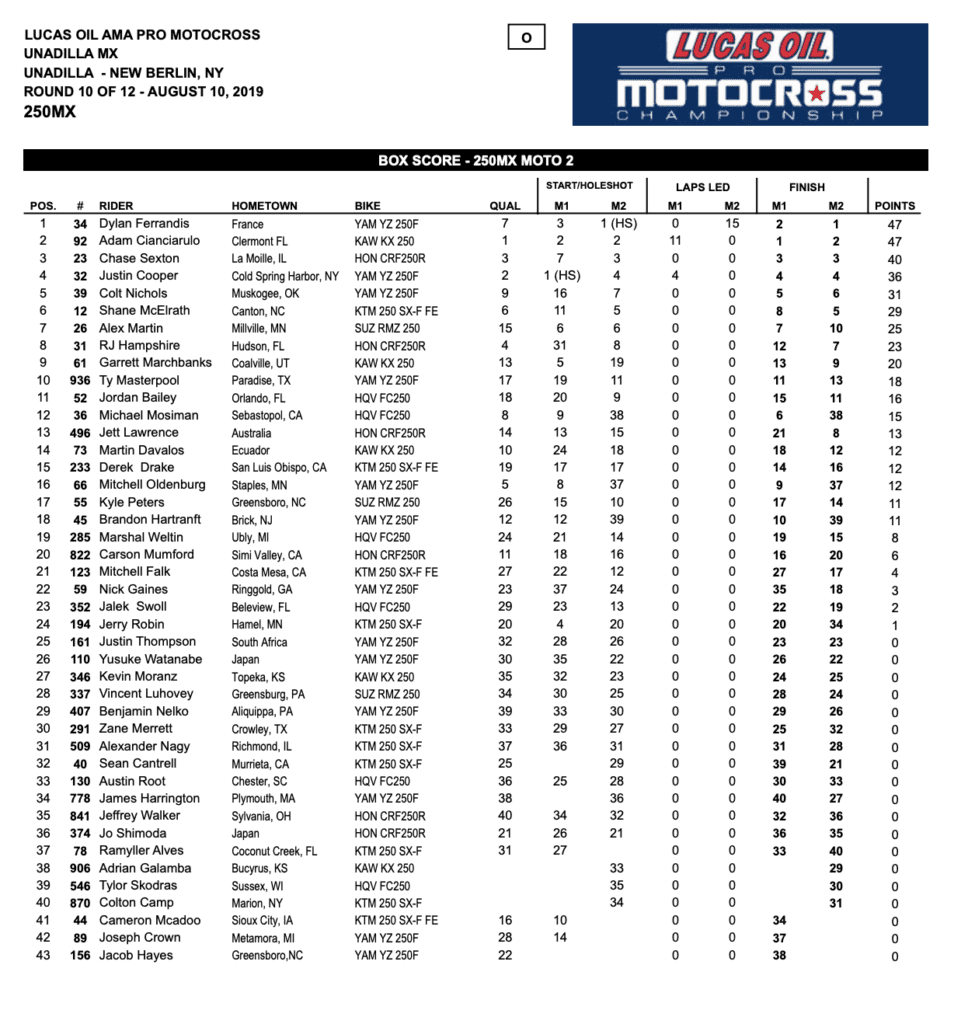 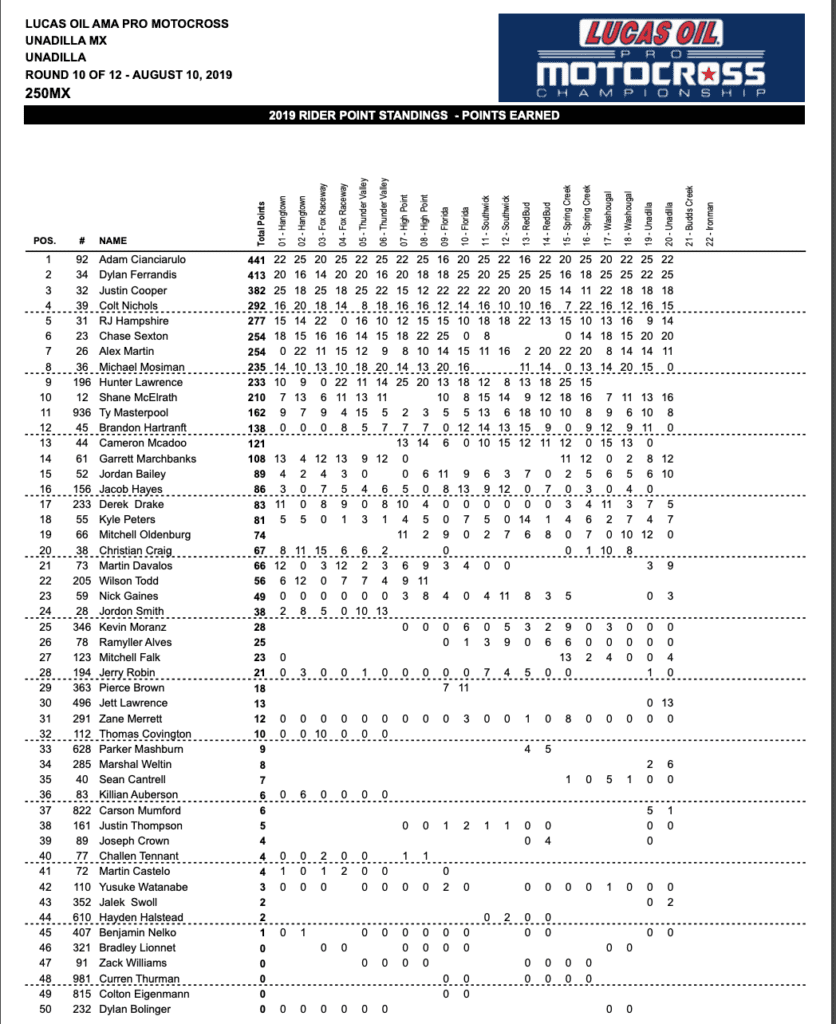 Defending champ Eli Tomac led the way on his Monster Energy Kawasaki at the start of the first moto and led Justin Bogle, Zach Osborne, and fast qualifier Roczen onto the track. Roczen wasted no time and displaced both Osborne and Bogle in the same section on the first lap, then set his sights on Tomac for the lead spot. Roczen turned in some blazingly quick laps and made his way past Tomac in the mechanic’s area only a few laps into the race, and he instantly began to put distance on the crowd. Tomac, meanwhile, didn’t look like himself once he lost control of the lead and he dropped back into the pack in very uncharacteristic fashion. ET was seventh at the finish, with his teammate Joey Savatgy passing him on the last lap. Red Bull KTM’s Marvin Musquin started the race just outside of the top five, but he used his precise, fluid riding style to overtake all but Roczen as he raced through to second by the finish line. Monster Energy Yamaha’s Justin Barcia, like Musquin, worked through the field and into the final podium spot, only his ride was marked by aggression and edge-of-your-seat riding.

Musquin grabbed the holeshot in the second moto and led Rockstar Energy Husqvarna’s Zach Osborne, Savatgy, Barcia, and Tomac. Barcia went down halfway through the first lap and dropped out of contention. Moto one winner Roczen gated eighth, but went to work right from the get-go and began to work his way through the field and towards the front. A mistake by Musquin eight minutes into the moto allowed Roczen to sneak past and into the lead, but the Frenchman did his best to retaliate with a pass of his own. Roczen would not be denied, however, and put his head down and pulled out to another commanding win. Musquin held on to second, while Tomac redeemed himself after his poor first moto with third in the final. It would be Osborne’s 4-4 scores, however, to earn the third and final spot on the podium.

“I don’t know what to say,” said Roczen. “A perfect day! First in both qualifiers, and first in both motos! It’s been a long time and it feels good.” 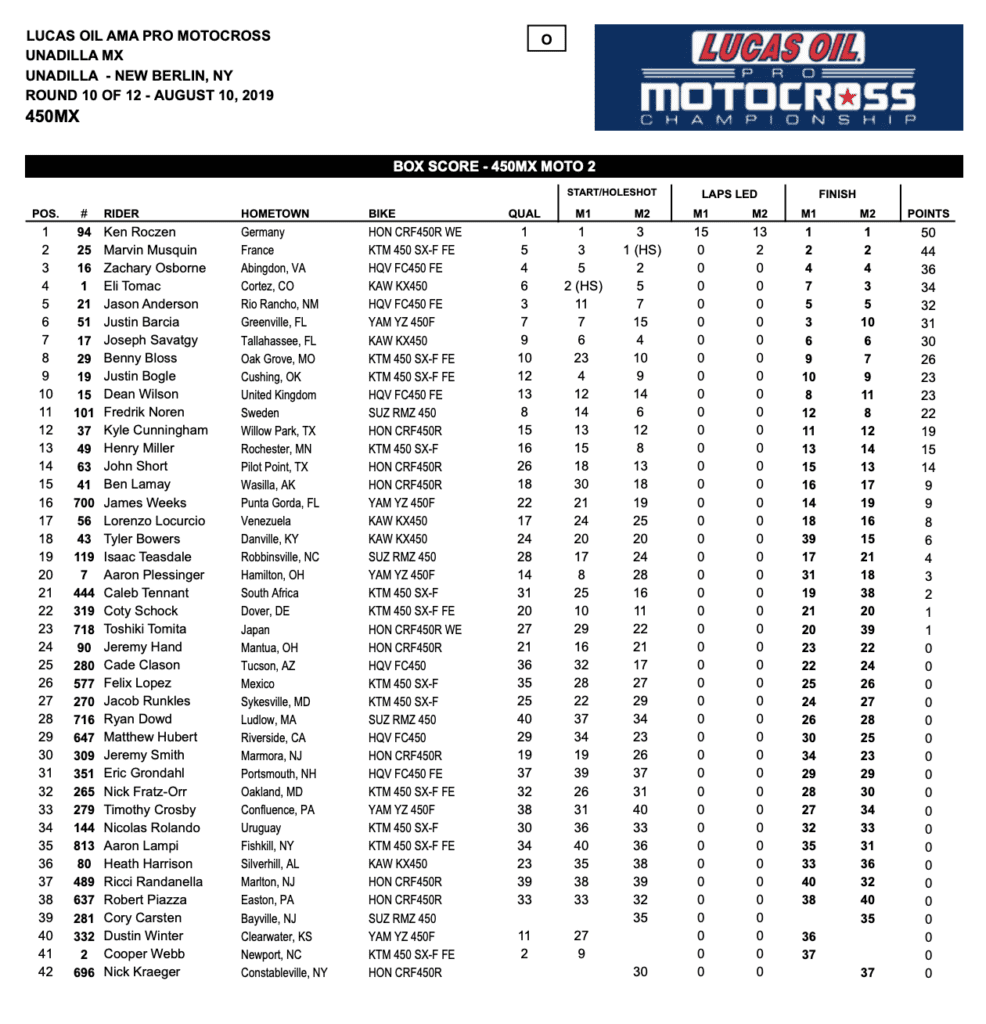 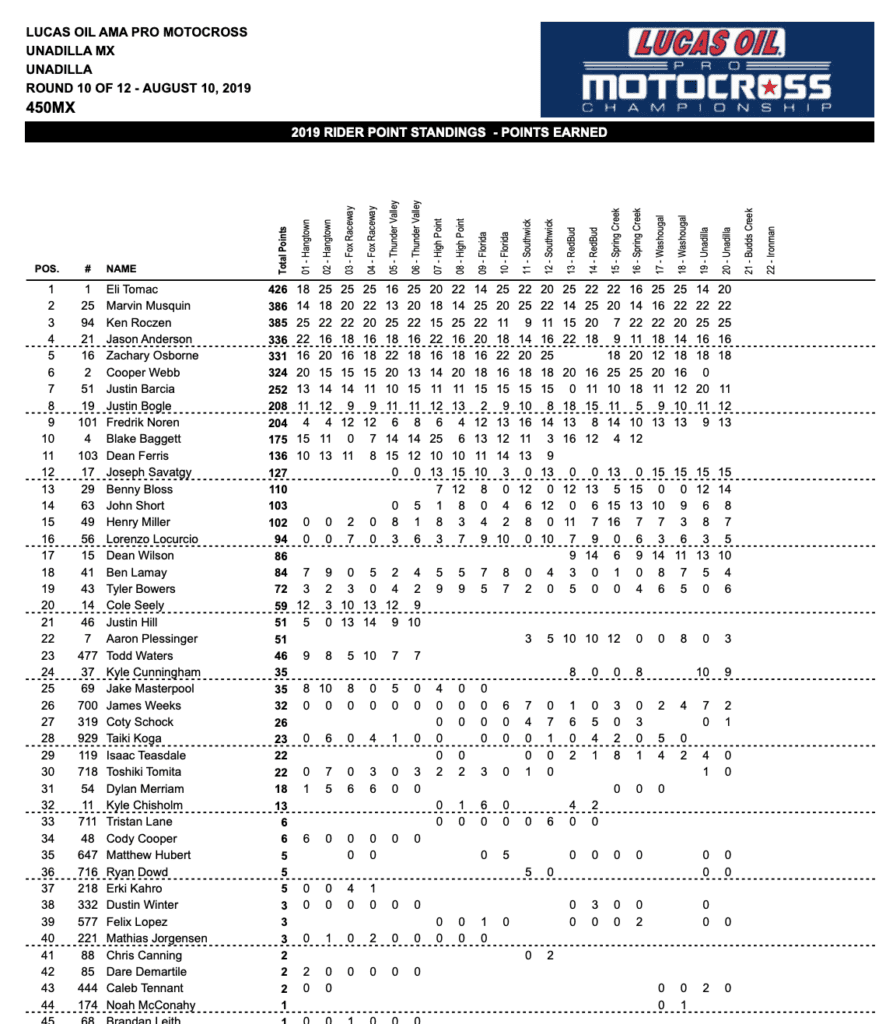 2019 Unadilla Motocross | From The Fence Gallery