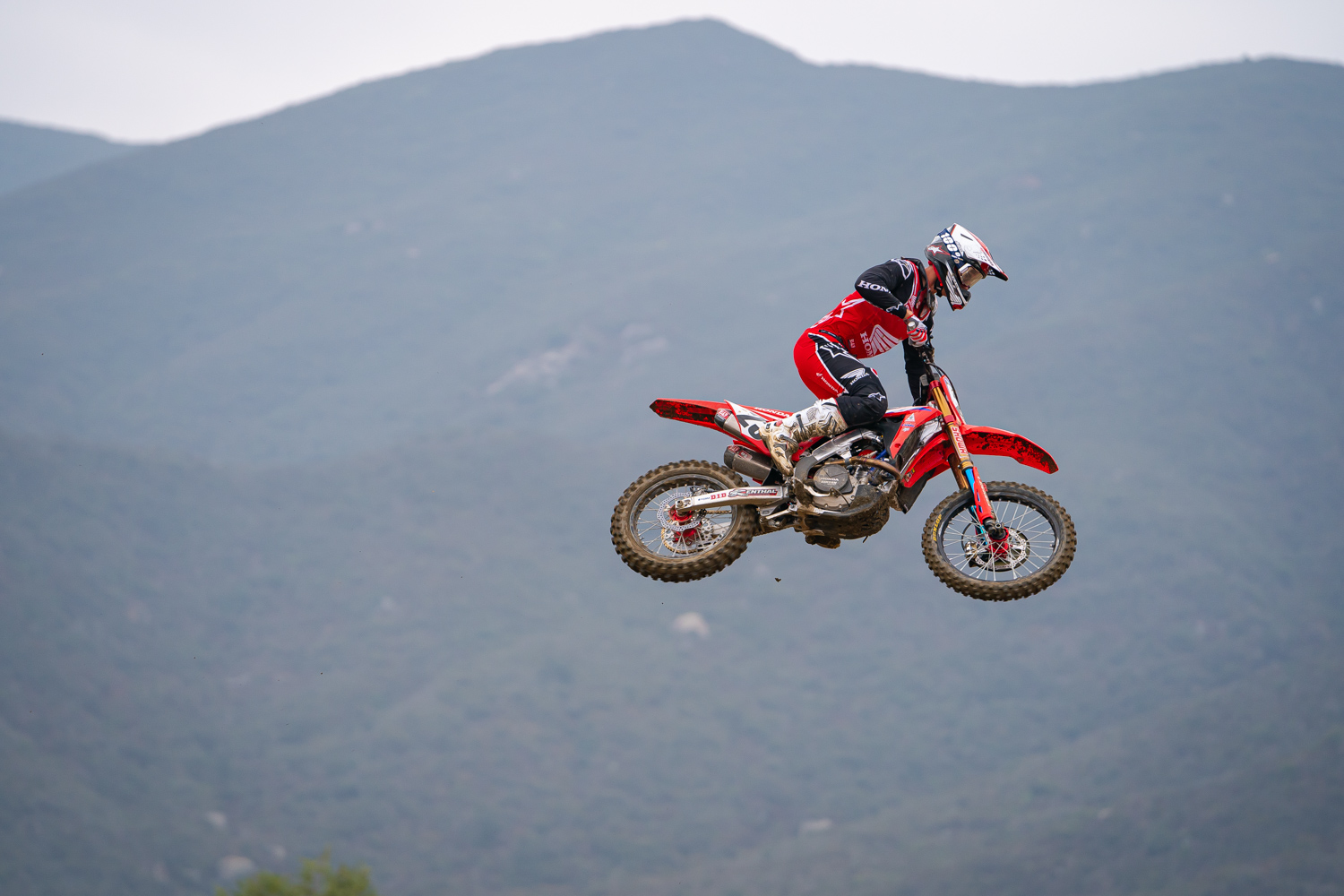 This is the end. After months of traveling around the country, the 2020 Lucas Oil Pro Motocross Championship has arrived in California for the 2020 Fox Raceway Motocross, the ninth and final round of the season. It’s been an exciting summer, especially considering the circumstances, and the race for both titles will go down to the wire.

Although riders spin plenty of laps at Fox Raceway, the property has been closed for a few weeks so that the track could be reconstructed for the National and today is the first time that they’ve put in laps on the new layout. 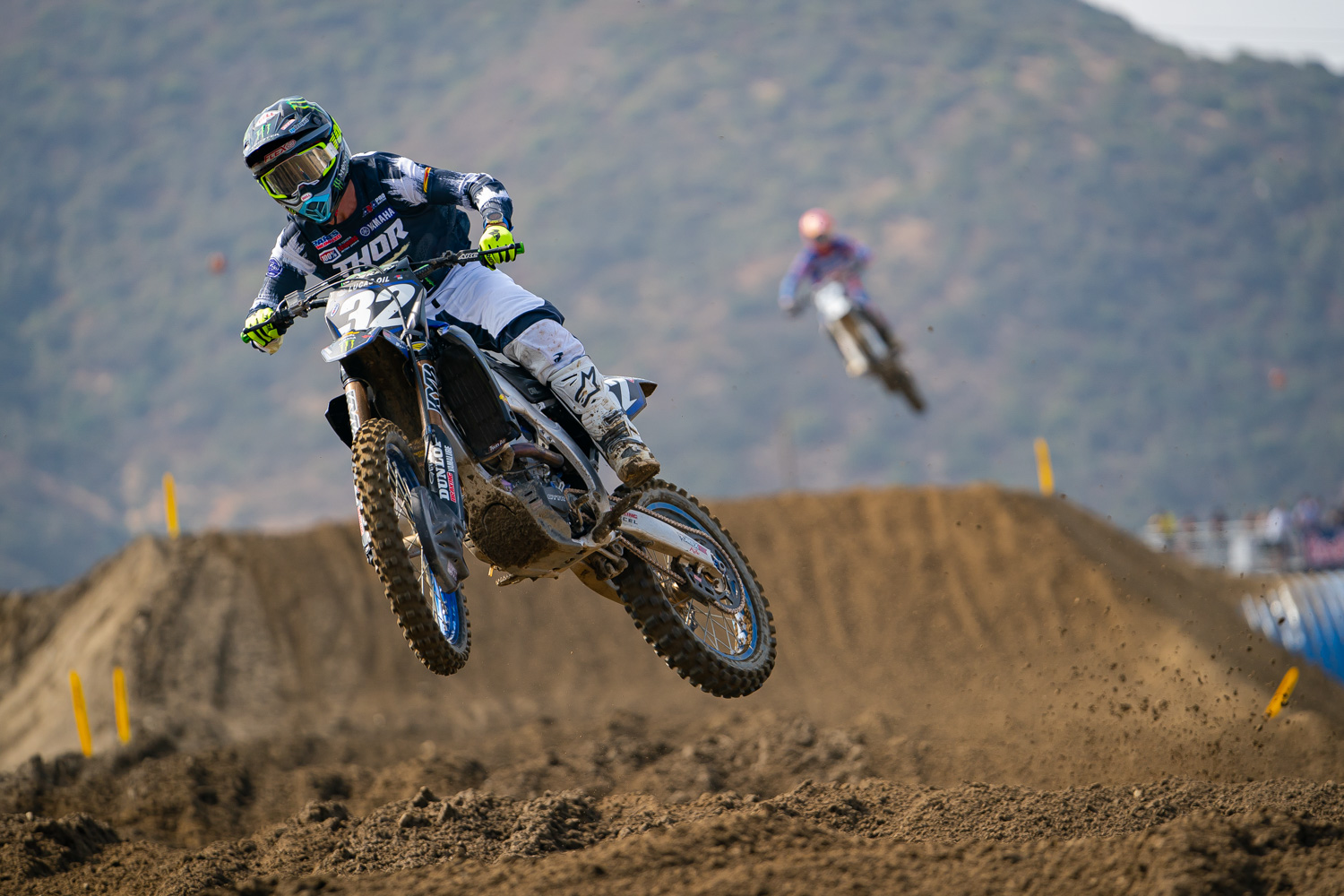 Justin Cooper is on a roll. Still riding the wave from his Thunder Valley win, the Monster Energy/Star Racing/Yamaha rider was the fastest man in both sessions of Timed Qualifying, with his best lap being a 1:54.381. Cooper was the only rider in the 250 Class to post a 1:54 time and it was nearly a full second faster than the rest of the pack.

Dylan Ferrandis and Jeremy Martin have a lot on the line today, as one of the two will leave the track the 2020 250 MX National champion. With an 18-point gap in the championship standings, we could see the title decided as early as Moto One or go all the way to the checkered flag in 250 Moto Two. To make things even more exciting, the contenders posted the second and third fastest laps of the class in Timed Qualifying, a sign that they’re at a very close pace. Monster Energy/Star Racing/Yamaha rider Ferrandis was the quicker of the duo after a 1:55.302 time, while GEICO Honda rider Martin’s best was a 1:55.344. They were the only riders in the 1:55 range.

We’re getting used to Jett Lawrence being in the top-five. The GEICO Honda rider has improved at every race this season and he was ranked fourth overall at the end of the finale’s morning sessions, thanks to a 1:56.408 time.

Brandon Hartranft is looking to end the season on a high note. The lone rider under the Troy Lee Designs/Red Bull/KTM tent this weekend, he was fifth fastest in the class after a 1:57.099 lap. 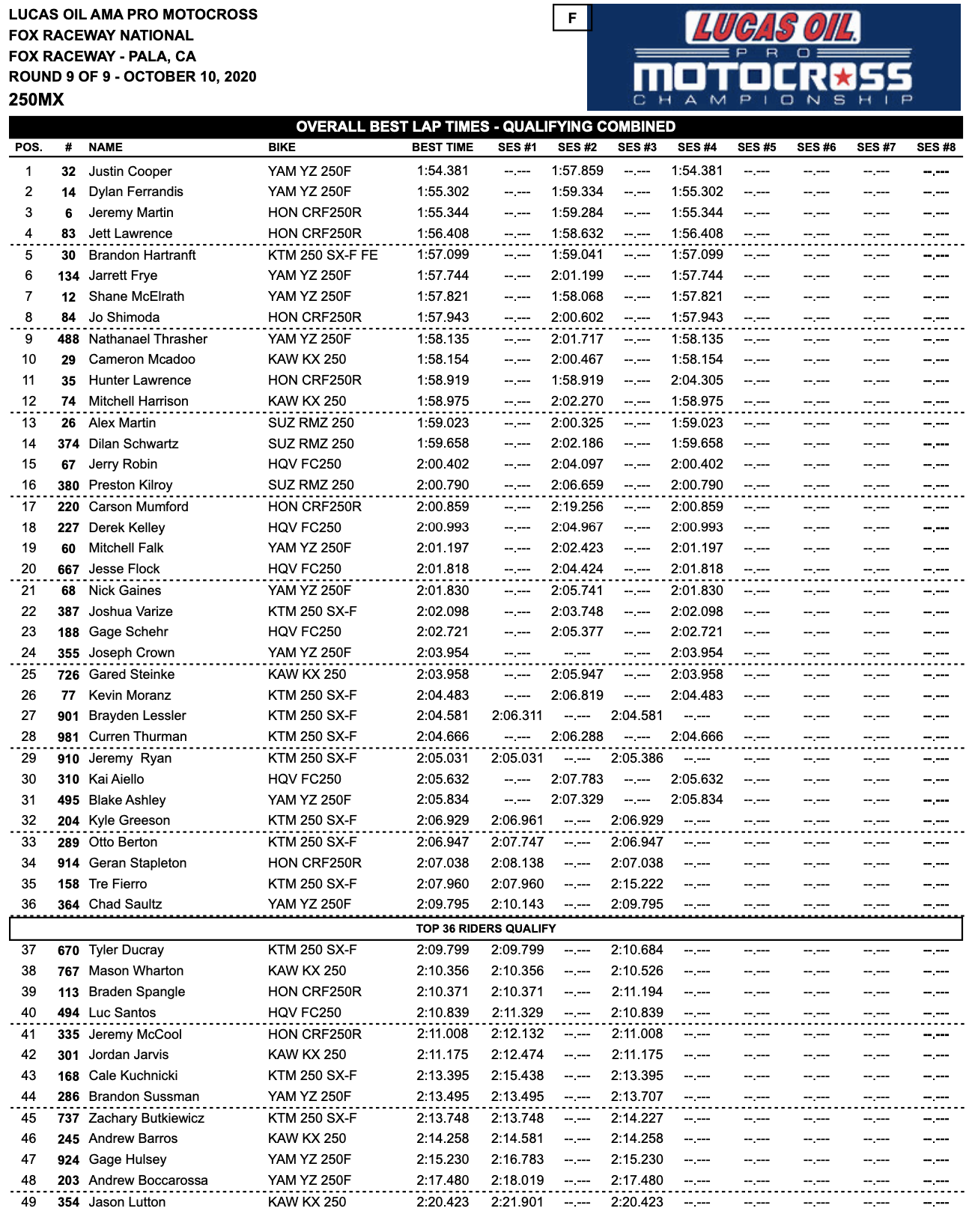 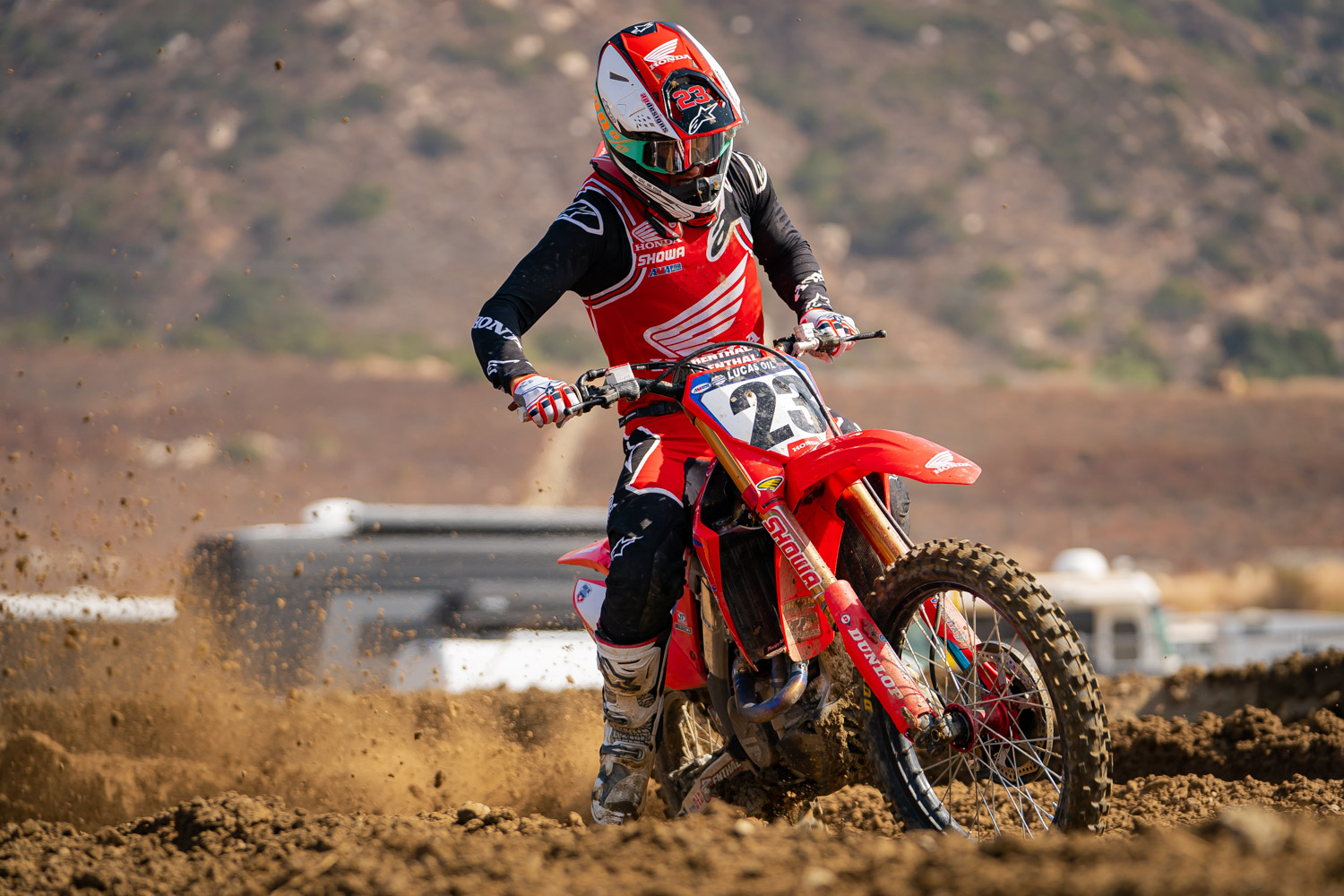 Team Honda HRC’s Chase Sexton was the fastest rider of the 450 Class during qualifying, an accomplishment the rookie has done four times this summer. His 1:53.682 time was the quickest of either class and he was the only rider of the 109-person field in the 1:53 range.

Adam Cianciarulo comes into the finale with a chance at the title. Down less than a Moto’s worth of points in the standings, the Monster Energy Kawasaki rider needs to finish ahead of Zach Osborne in 450 Moto One to take the fight to 450 Moto Two. The rookie has the pace to run at the front, evident in his 1:54.025 lap and second overall rank in qualifying.

Today marks the end of Christian Craig’s time with Honda, as he’ll move onto a new team in 2021. The Team Honda HRC rider is eager to end the decade-long partnership on a high note and his 1:54.932 lap was the third-best of the 450 Class.

Marvin Musquin has had his share of slams in the last few rounds of the season, but it hasn’t slowed the Red Bull KTM rider much. A 1:55.388 time put Musquin fourth overall.

Zach Osborne is potentially one race away from his first 450 Class championship. Up 24-points in the championship standings, the Rockstar Energy Husqvarna Factory Racing rider could clinch the title by beating Adam Cianciarulo for any points-paying position in 450 Moto One. The two could go 19th and 20th, but as long as Osborne finishes ahead, he will earn the necessary points. During the morning qualifying sessions, Osborne seemed to push just enough to log a fast lap, 1:55.946, and rank fifth on the timesheets. 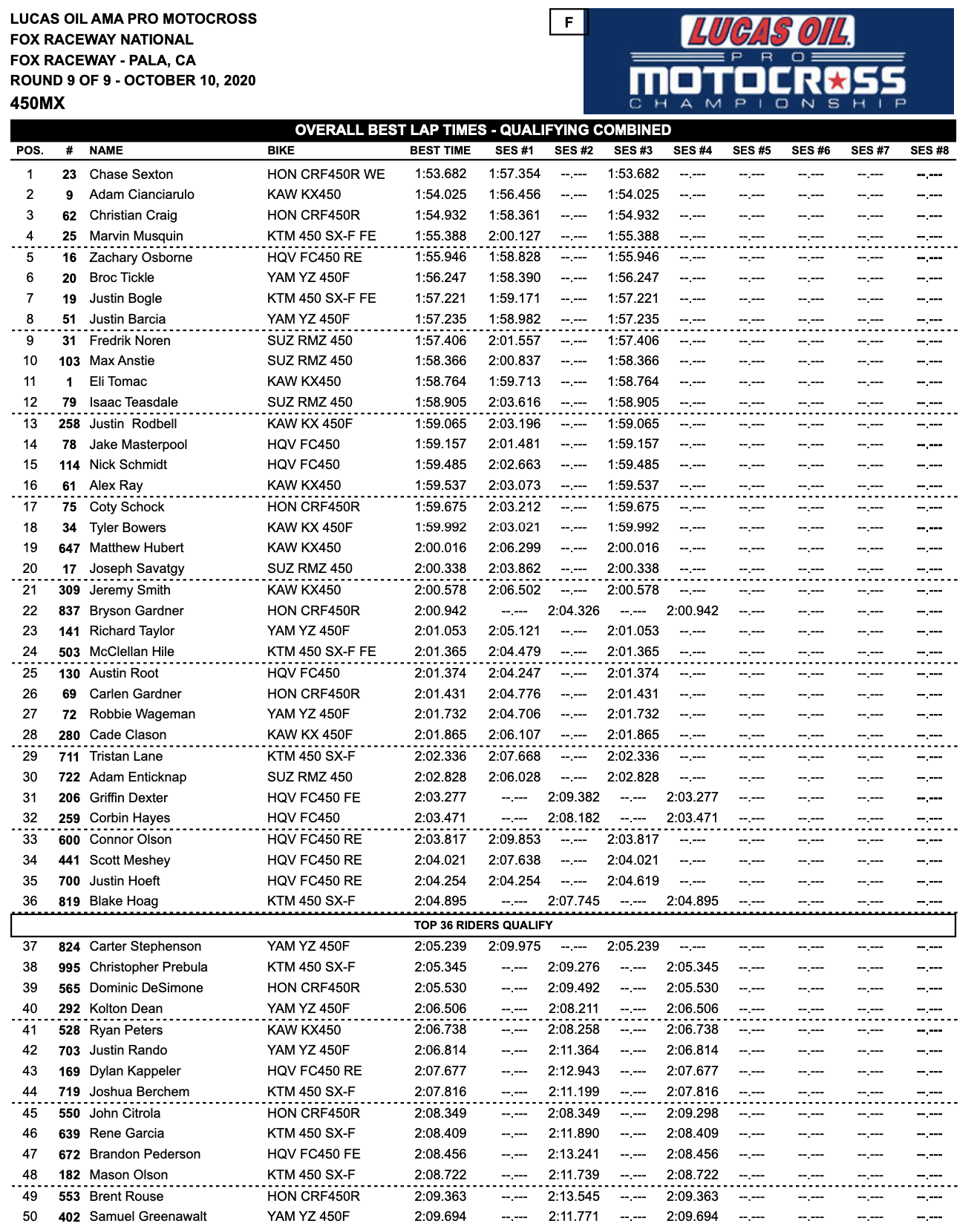 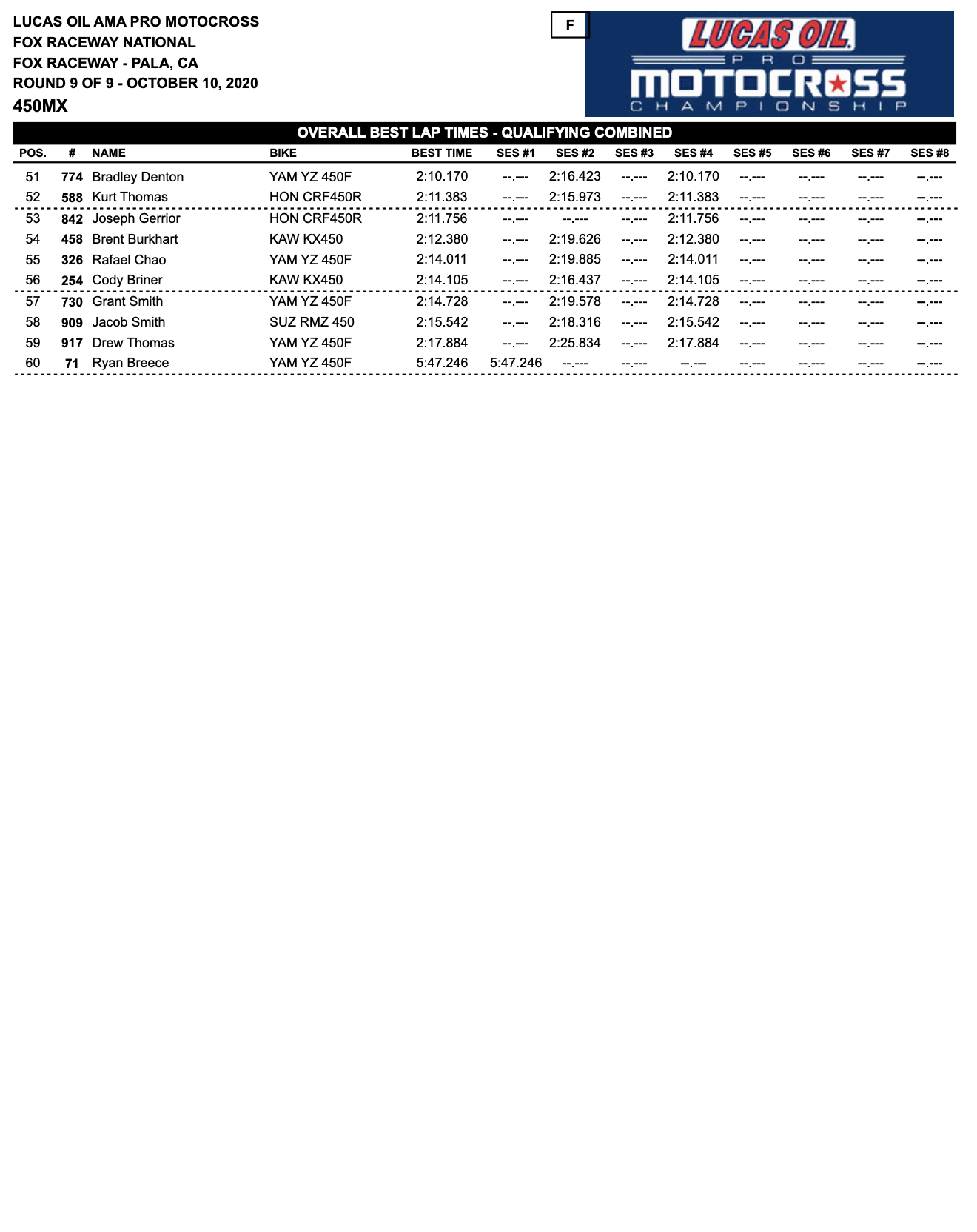