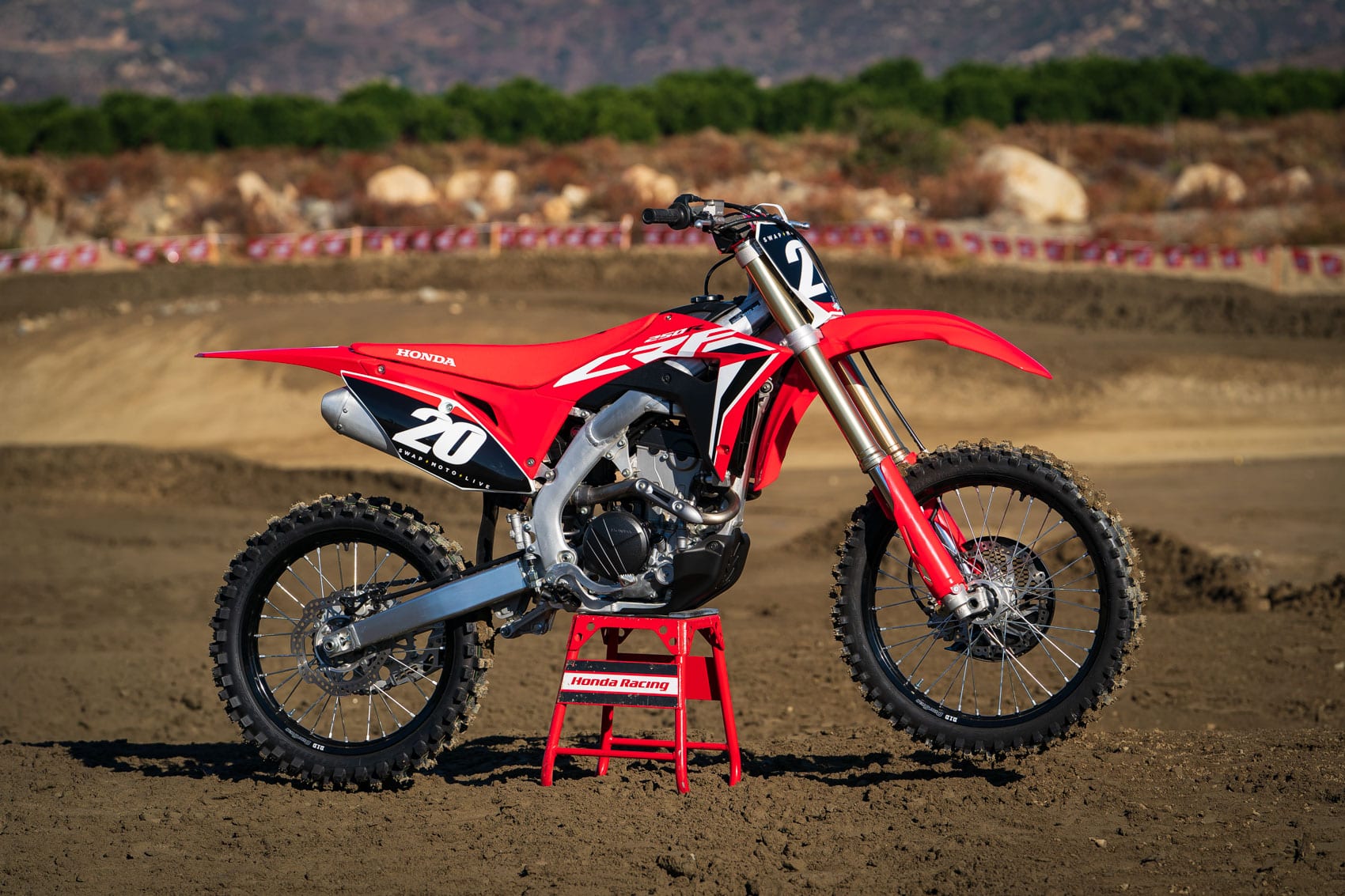 The Honda CRF250R was one of the better bikes in its class in 2019. Riders said that the precise handling of the chassis encouraged them to dive deeper into corners or carve a tighter line, enjoyed the high-revving characteristic of the engine, and found suspension settings that gave them confidence for whatever obstacles they encountered on the track. But notice how we said “better” and not outright “best.” As with anything, there is always room for improvement and some stated the engine’s powerband was all mid to high, due in part to internal components and a transmission that had rather short second gear, things that left the bike lacking a low-end hit that’s so critical in the 250 class. Others had qualms that the chassis was almost too responsive and that it felt unsettled in certain situations. Individually, those two things that could have been overlooked and the bike could have taken top honors, but together they made some rank the bike below others.

There’s no denying the Honda CRF250R is a solid bike and that it offers enough to keep a rider entertained and at the head of the field when all is right. That fact is made clear in the two pro championships it earned this year with Chase Sexton in the 250 East Coast region of the Monster Energy Supercross Series and with Jace Owen in his dominant run of the Kicker Arenacross Series. The bikes that those two took to titles did have a few updates and some of the teams’ knowledge was passed right on to Honda engineers for the 2020 CRF250R.

The 2020 Honda CRF250R isn’t an all-new bike, but when compared to its predecessor, the revamped engine package, new chassis, and some suspension settings to match make it noticeably different.

Honda’s biggest objective for the 2020 model was to up the low to mid-range performance of the engine, without sacrificing the top-end. To do this, the Japanese OEM looked at key components and made subtle changes that on their own don’t seem like much, but when together form a long list. The head of the engine features a new cam profile which delays the opening of the exhaust valves and reduces the valve overlap (the split-second when the intake and exhaust valves are open at the same time) and a new piston. The ignition timing was reconfigured, the shape of the combustion chamber was redone for improved efficiency, the resonator was removed from the right-side header, and the internal elements of the muffler cans were changed.

Making a better performing engine is one thing and putting the power to the ground in a usable way is another. A taller second gear altered the transmission’s gear ratio, which was done bridge the big gap some felt between second and third gear on the 2019 model, a surface treatment was applied to the cogs to improve their engagement and durability, and a gear position sensor was added to accommodate dedicated engine maps for each gear. To match the new transmission, Honda increased the capacity of the clutch by 18-percent and dropped in a stiffer clutch spring for a stronger all-around package. The bike again features three pre-programmed engine modes and a launch control start assist that riders can change via the handlebar-mounted switch, but the CRF250R did not receive the Honda Selectable Torque Control that was debuted on the 2020 CRF450R.

Chassis changes weren’t high on the list of demands in 2019, yet Honda still threw a new aluminum perimeter frame and swingarm at the CRF250R. Why? The design of the frame increases the yaw-angle stiffness (that’s technical talk for rotational) without giving up lateral or torsional stiffness, and also weighs less. The Showa coil-spring fork received increased low-speed damping, while the Showa shock got more low-speed compression and lost some high-speed compression. Lastly, the lithium-ion battery for the electric starter was lowered 28-millimeters to be closer to the center of gravity.

Other important things to note are a new rear brake setup which now has a longer pedal, shorter brake hose, and new pad material that together increases the pressure of the entire system for improved performance and durability, a larger left-side radiator for improved cooling, a 10-percent larger air filter, and new footpegs that are lighter and do a better job at shedding mud.

Our focus in the first motos was to get a feel of the engine. Honda’s efforts in the area were all to improve low to mid-range performance, with no real plans of altering the far-revving top-end that we had become fans of in the 2019 model. On the stand and in the pits, there was no discernible difference, as the electric starter got the Dual Overhead Cam engine going with no sense of a struggle. 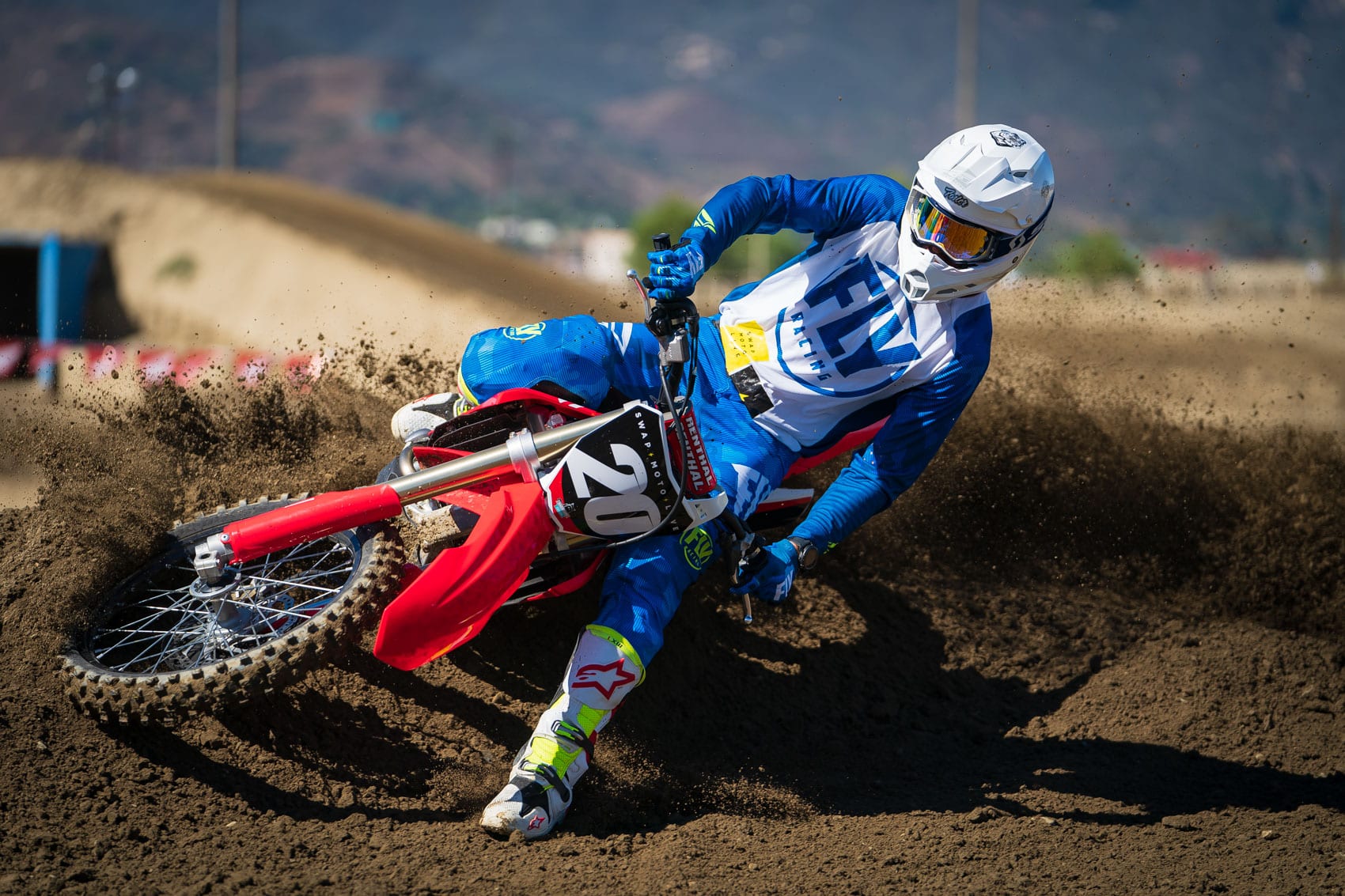 The prep at Fox Raceway during the intro was practically perfect for a test. The Southern California track is known for high-speed lanes, lofty jumps, tight hairpins, following sweepers, and a mix of terrain types (sandy soft spots, blue groove hard-pack, and regular old intermediate dirt). After a short warm-up, we decided to attack certain areas of the track that we knew the 2019 model wouldn’t have fared so well in to see if there was more low-end power and a better transition between second and third gears.

Right away we could tell that Honda had made gains in the bottom-end of the powerband and did so in a way one might not expect. Instead of an arm-jerking surge other bikes are known for, the 2020 CRF250R has a strong profile, feels broad and easy to maintain, and transitions well into the upper part of the curve. One can easily roll the throttle on and build momentum, or whack the wrist to pull out of tight spots without worry of losing control.

Maintaining momentum was key on the 2019 bike, to the point that some testers likened it to a two-stroke riding style with the way they had to ace every shift, keep the revs high at all times, and have a finger on the clutch just in case a quick stab was needed. Doing that was especially tricky in the gap between second and third gear, where there was a big hole that separated the two, and it took somewhat of a toll on a rider’s energy and the clutch’s performance.

It’s not as do or die on the 2020 bike, because the lower part of the range is much broader and powerful. All of the changes to the combustion area of the engine work together well, as it’s difficult to pinpoint one new detail as the breakthrough. But the changes to the transmission’s cogs and gear ratios with the sturdier transmission are obvious. Riders are encouraged to hold onto second gear much longer than before and when it comes time to click the shifter, will seamlessly transition to third gear. This means fewer shifts, less revving, and less clutch abuse. We tried the three maps on the bar at various points in the day and preferred Map One, which is programmed to be the in-between the mellow, slick terrain-minded Map Two and the slightly more aggressive Map Three.

With that said, we feel there could be more low-end, especially in situations when it needs to be instantaneous like during starts or out of deep turns because the small lack puts the bike at a disadvantage that it has to work out of. It doesn’t need to be a substantial amount of torque, but just enough to get it closer to the benchmark set by Yamaha.

The 2020 chassis is largely based on the frame used in the last two years on the CRF450R, but with a more narrow engine cradle. In our opinion, a new frame wasn’t really necessary for the CRF250R, and it likely comes due to weight savings. We found no huge difference in the 2020 design compared to the 2019, because the bike retains the incredible cornering characteristics, tracks forward with stability, and takes input very well. Honda has a history of a rear-end bias on their bikes, something we’ve felt for a few years, and there’s a small sensation of a light front-end on the 2020. This can easily be addressed by setting the sag, moving the forks lower in the clamps, and stiffening the suspension on both ends of the suspension for a slower, sturdier ride. This came at the recommendation of a tester that is faster and heavier than Honda’s baseline rider, so take that advice in relation to your size and skill.

Everything else on the 2020 Honda CRF250R is exactly what one would expect of a red bike. The cockpit is spacious without forcing one to stretch out for controls, there are no odd edges that might cause a boot or leg to catch, and the fit and finish is seemingly second to none. Yes, the bike lacks features like the mobile tuner of the Yamaha and the various parts that make maintenance easier on KTM and Husqvarna, but those are things we aren’t going to knock Honda for just yet. The bike does what it’s supposed to do on the track and covers all of the requirements.