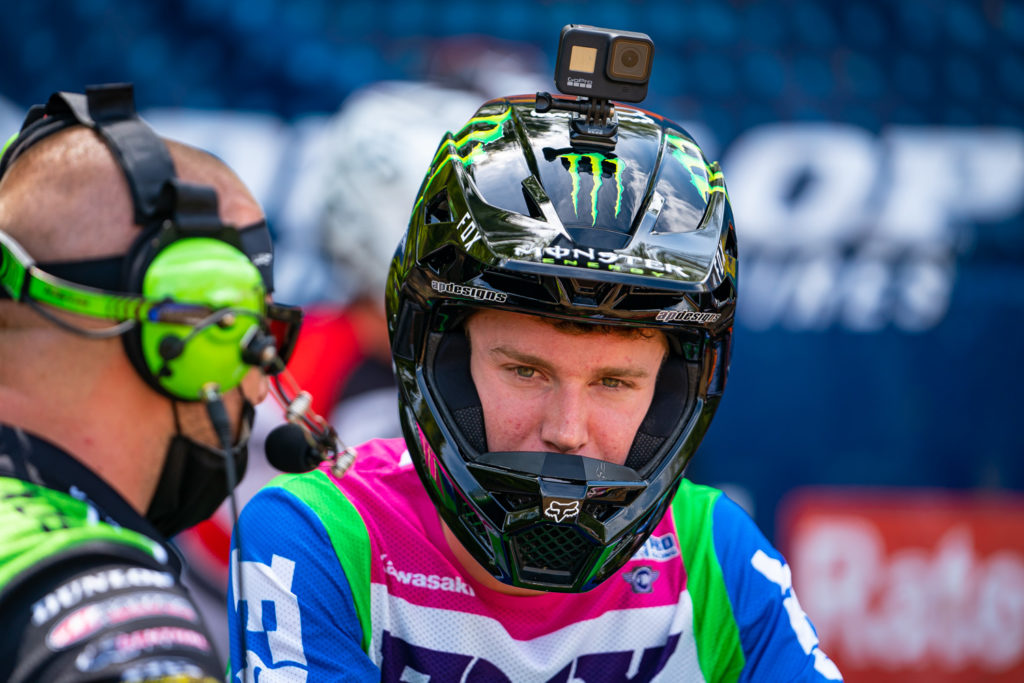 New race season, new GoPro onboard videos! The camera company is back as a partner with the 2020 Lucas Oil Pro Motocross Championship and have uploaded footage filmed by GEICO Honda rider Carson Mumford in 250 Moto Two and Monster Energy Kawasaki rider Adam Cianciarulo during 450 Moto Two at the 2020 Ironman Motocross, the third round of the summer series. Press play on the video and check out some of the things we noticed in AC and CM’s riding…

Mumford’s race is a visual summary of the opening lap of a 250 Class race, starting with the start. Yes, the guys on factory-backed bikes often get the jump when the gate drops, but the privateers with bikes built to the hilt will hold the throttle on a little longer and can make things interesting. That’s exactly what happened here, as a number of three-digit guys got higher in the top-10 than the GEICO Honda rider.

The other big takeaway is how fast things happen. Mumford and teammate Jo Shimoda were next to each other a few turns until Shimoda upped his intensity, went after competitors, made close moves, and pulled away. While Shimoda moved forward, Mumford came under attack from Alex Martin and RJ Hampshire, which negated the progress he made after the pass on Austin Root.

After a bad start from the far inside gate in Moto One, Cianciarulo moved over a few positions on the grid for Moto Two and had a much straighter shot at the first turn, which he exited behind Zach Osborne. Both riders launched the single-jump into roller lines, a risky move that only the front-runners were able to do on the opening lap.

AC must have read our recent Moto Tip with Alex Martin, where we discussed the importance of staying out of the roost thrown by another rider. While Osborne took up the main racing lines, Cianciarulo pointed his Monster Energy Kawasaki elsewhere and even up to the edge of the course, where there were slightly smoother lines.

A sweeping right to left block pass on Lap Two is how AC to overtook ZO and once in the main line, the 450 Class rookie upped his pace in an attempt to check out.

As great as the GoPro camera is, it doesn’t accurately portray the Godzilla section of the track. The back-to-back jumps are some of the biggest on the National circuit and are almost impossible to walk up or down without struggling. Cianciarulo’s approach to the stepdown was a little sketchy, as he drifted to the left and lost some forward drive, but his skill and the power of the 450 helped him ride it out and make it to the downside of the hill.

The last few moments of the video show how hectic it is to lead a 450 Class Moto. Cianciarulo had to plot his way around the challenging track, avoided downed riders like Max Anstie, not get blocked by the slower traffic, and maintain his advantage over second place.