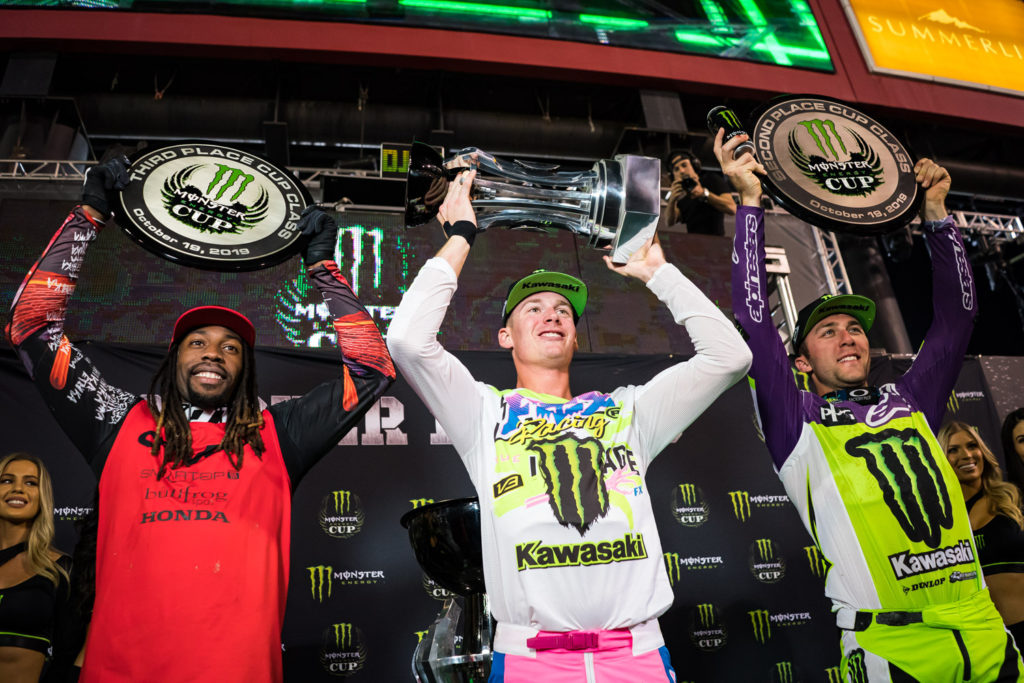 You saw the title and clicked, so yeah, you know the 2020 Monster Energy Cup will not take place this year due to COVID-19. The big offseason Supercross race was planned to take place in October at Dignity Health Sports Park in Carson, California, which was to be a massive departure from its longtime location in Las Vegas. Feld Entertainment made the announcement on July 28, some three months before the race was supposed to run, but this is news that many of us figured was a long-time coming because of the continued issues associated with COVID-19, including restrictions on large public gatherings and limited availability of stadiums due to other sports. I’m tired of talking about the bad shit that comes anytime we mention COVID caused cancellations, so we’re just going to knock them out quickly and then explain why we’re bummed the race won’t run. Here we go…

California’s rules on large public gatherings are some of the most stringent in the US and there’s no way that an event like the MEC would be approved to run by October. The facility has zero events on its calendar through the rest of the year, as the LA Galaxy’s MLS season was moved to Disney’s Wide World of Sports complex in Orlando, and concerts set to take place in August were canceled completely. Simply put, California has long been out of the question. Feld Entertainment’s announcement stated that they were unable to find a proper venue for that time of year since other sporting leagues plan to have their seasons going at the same time, but given the current restrictions currently in place around the country and the NFL’s unclear plans of how teams will allow crowds to attend games, it seemed highly unlikely that the Monster Energy Cup would be able to run in front of a packed stadium anywhere in the United States. 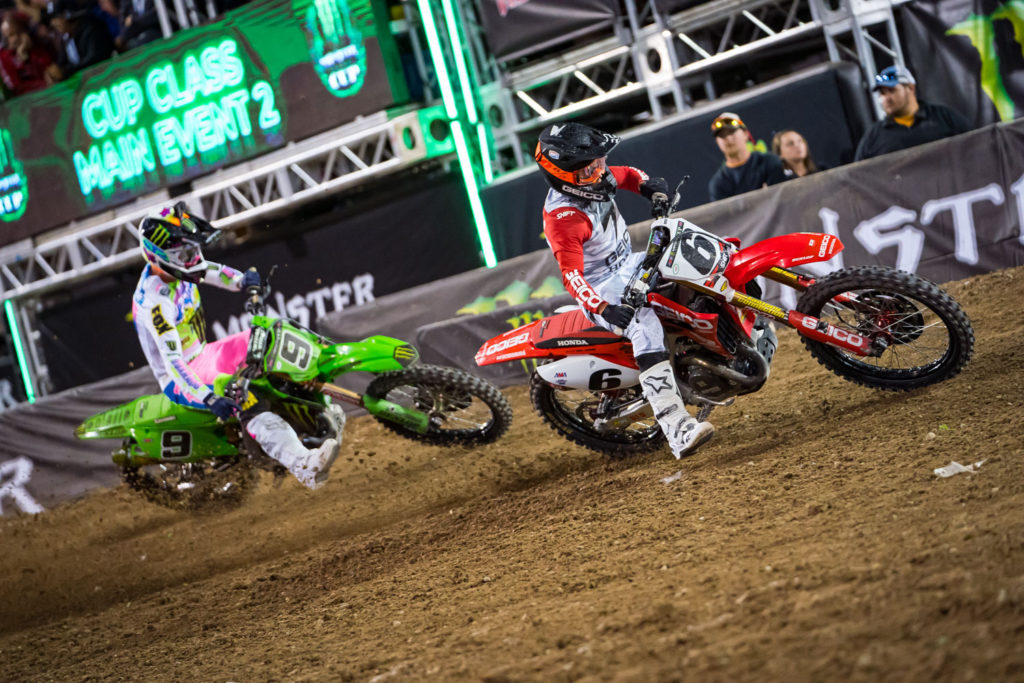 Now that the unpleasant parts are out of the way, we want to talk about how bummed we are the race won’t happen.

The Monster Energy Cup is a big, unique event that serves many purposes. It’s a testing ground for Feld Entertainment to experiment with the race formats, including the Triple Crown events that are mixed into the Monster Energy Supercross Series. The Dirt Wurx crew makes a track design that mixes mellow SX-style obstacles with fast and flowing outdoor sections, which helps full-time AMA racers ease into their offseason regimens or debut new rides, entices international stars l to make the trip for a chance to compete inside a stadium, and allows the Amateur All-Stars and SuperMini riders to race on a tamed down track. Oh yeah, and then there’s the fact that a million dollars goes to a Cup Class rider that sweeps all three races, which has happened with Ryan Villopoto, Marvin Musquin, and Eli Tomac.

The 2019 race had no shortage of talking points, including Adam Cianciarulo’s overall win in his big bike debut, Malcolm Stewart’s first-ever US victory on the 450, Tim Gajser’s return for redemption after a massive crash two years prior and fifth-place finish, Dean Wilson’s life-changing in a good way dislocated hip that included a ketamine trip, Jeremy Martin’s return to competition after a long layoff due to a broken back, Jordi Tixier’s practice concussion, Jett Lawrence’s debut to the masses, and confirmation that Evan Ferry is one of the top current amateur talents. And that’s just one year. 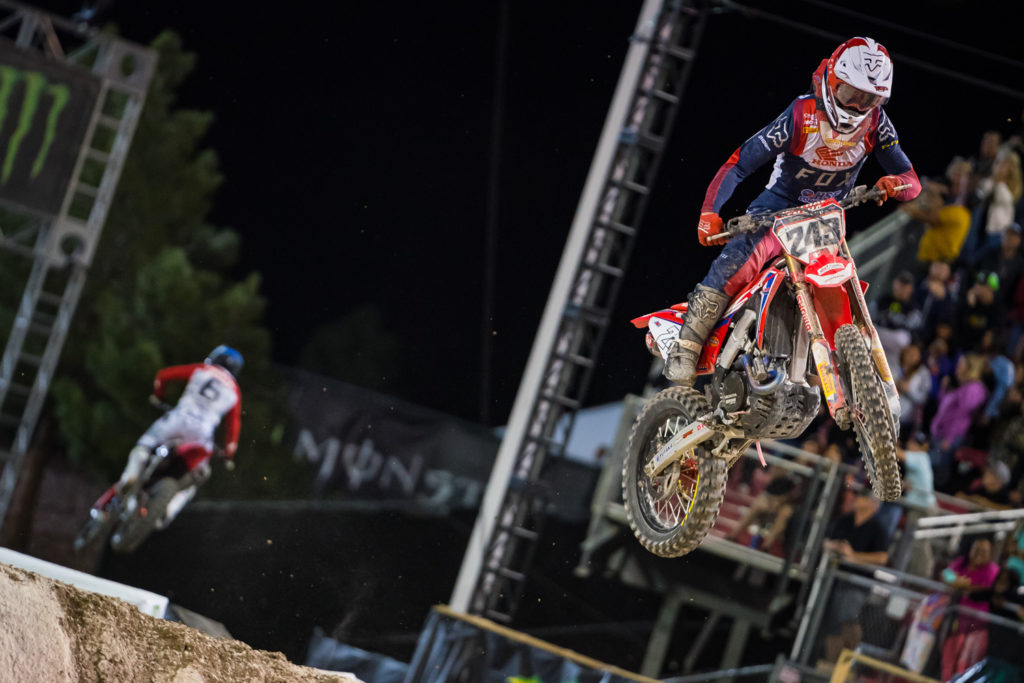 How a team feels about the Monster Energy Cup depends on what’s going on in their world at the time, because some have used it as a low-pressure launch of talent and equipment one year and skipped it all together another. The 2011 MEC served as Ryan Dungey’s first race with Red Bull KTM, but surprisingly, it’s one of the few events were RD5 never won the overall. In fact, the MEC is where Dungey had some of the strangest rides of his pro career, including the suicide shifts in 2012 and missed Joker Lane in 2013. While we’re on the topic of KTM, the Austrian brand has made excellent use of the “works bike rule” at the MEC two times, including with Dungey’s first Factory Edition in 2011 and the hidden debut of an all-new motorcycle with Musquin-Anderson-Tickle in 2018.
Ken Roczen used the 2016 races as his first outing with Team Honda HRC and it was shaping up to be a dominant performance until he crashed in a rhythm lane during Race One and missed out on the overall. After spending much of last year dealing with health issues, Roczen skipped the 2019 race completely.

All of that makes for a lighthearted weekend at the races. During the course of the day at the Monster Energy Cup, we’ll talk with riders about their newly announced deals with teams or the stress that some endure when they enter the offseason without a confirmed contract, while team managers will offer some insight on their plans for the following season or what they think of the available talent that isn’t signed at the time. The lure of the afterparty is on everyone’s mind throughout the day and figuring which color animal print is the best VIP pass is always a topic of discussion.

This sucks to see another race dropped from the 2020 calendar, but we’re almost used to it by now. If anything, we’re starting to turn our attention to the 2021 race season, because something major needs to happen soon if we are going to be allowed to fill Angels Stadium of Anaheim on the first weekend of January.