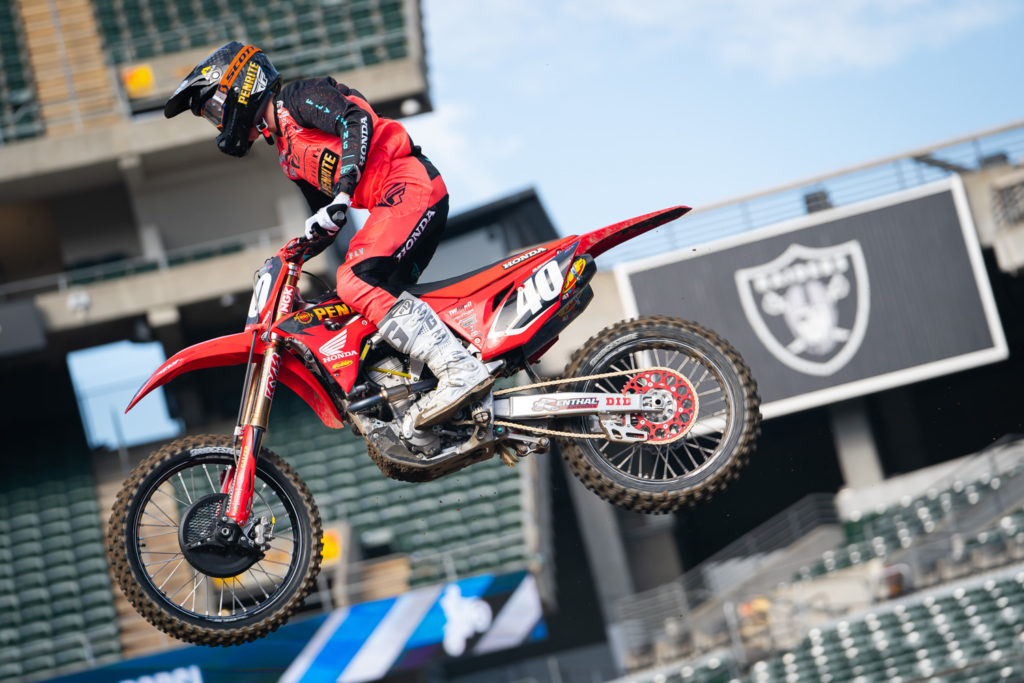 Greetings from the Black Hole! We’re in California’s Bay Area for the fifth round of the 2020 Monster Energy Supercross Series, the 2020 Oakland Supercross, and set to start an exciting day of action. The RingCentral Coliseum has hosted motocross races as far back as the 1970s, has been a mainstay on the schedule for the past decade, and made for some memorable motos.

We’re very interested to see how today plays out because Oakland is unlike the other two California venues on the circuit (Anaheim and San Diego). An open-air venue with dark and soft dirt, it’ll breakdown and become very similar to an East Coast style track later tonight, not the slick hardpack that the southern part of the state is known for, and a precise riding style will be key in getting around the ruts.

After four weeks of racing, we have an idea as to how the riders rank in both classes. There’s plenty of talent in both, but there’s been some separation between those at the front of the pack and those in spots 10 to 22. Will tonight’s track and results shake that up?

Although the Coliseum was built as a mixed sports venue (football and baseball), the floorplan is the basic diamond shape like Angel Stadium or San Diego, which means the Dirt Wurx crew has to change the way they design the layout. Short, punchy rhythm lanes are connected by a mixture of 180 and 90-degree corners, which should keep the pack close together. Unfortunately, during Friday’s media riding session we noticed that half of the track (the area on the right side of the starting line) seems to be very one-lined, which means riders will have to be aggressive to make passes happen or defensive of their position.

There was a massive wall jump into the sand section that a few riders uncorked on Friday afternoon, but by Saturday’s track walk, a small roller was built at the face that should make it practically impossible. Damnit.

Oakland’s timetable is earlier than most, with the start of the night show scheduled for 5 PM, which could play a part in everything. There will be some shadows on the track in the Heat Races and possibly the LCQs, while the Main Events should be completely dark.

There’s typically a slight risk of rain in the Bay Area at this time of the year, but the past few days have been sunny and clear, so the track isn’t as saturated as it has been in the past (There’ll be some naturally occurring moisture from the coast when the sun starts to go down). Still, the Dirt Wurx crew hit it with plenty of water last night and their recent efforts to sift debris from the soil have made it even finer and softer than ever, so it’ll be soft and rutted come race time. 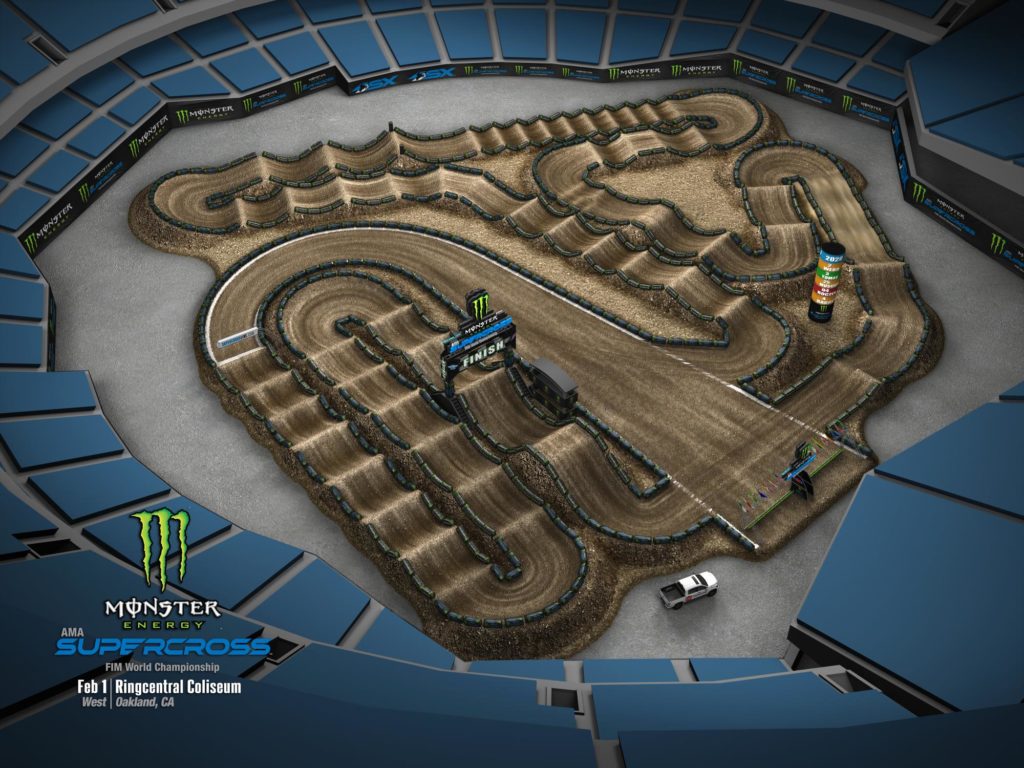 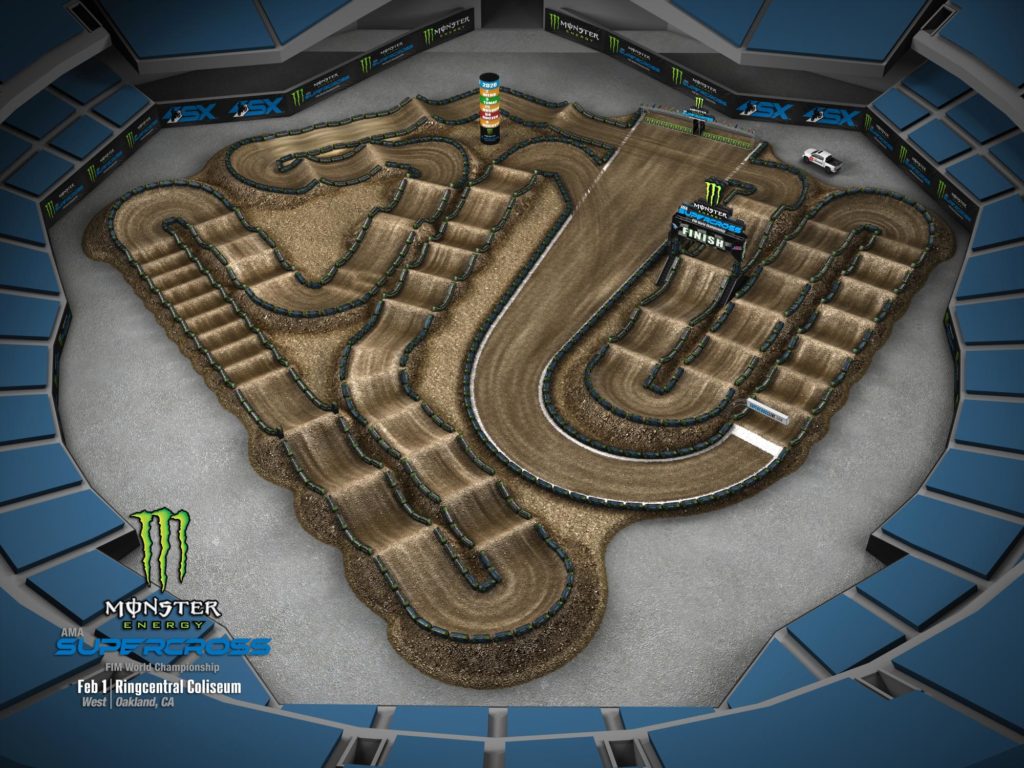 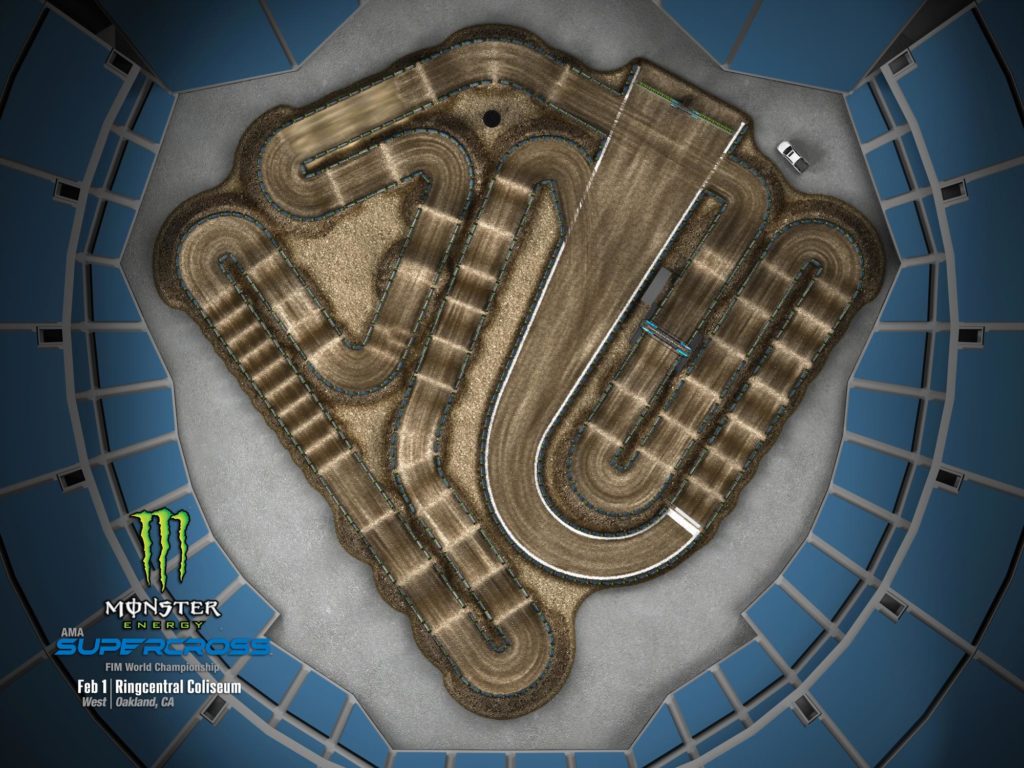 Keep an eye on these three today, because Oakland will be a very important race for each of them. Incoming championship leader Roczen has a mixed history at this round, due to some success and past crashes, but he seems to be in a very good place right now. His 1-1-1 performance at Glendale proved that he has the all-out speed to hold off the pack, which was greatly aided his starts and the controlled riding. Consistency through the next few races will be key for the Team Honda HRC rider because he’ll need to stack as many points as possible to maintain the top spot in the standings.

One win and assorted podium appearances might not seem like a stunning start to the season, but for Eli Tomac, this is awesome. The Monster Energy Kawasaki rider avoided any sort of bad finish through the first four rounds and is now ranked second in the standings, just a few down of Roczen. But now is about the time that Tomac finds his form and we’re due to see a dominant ride in the next few rounds. Never one to be in the championship hunt early in the year, things could get interesting if he takes control before the halfway point in the year.

Defending champion Cooper Webb said that he wanted to get through the first five races of the year ranked within the top-five. The Red Bull KTM rider is doing just that, thanks to two podium appearances and another top-five result, so all seems to be going according to plan. Webb’s biggest success in 2019 came at the East Coast races, where his riding style and setup tend to work best, and the soft dirt of Atlanta/Tampa/Daytona/Detroit/Indianapolis is just a few weeks away. How Webb does in Oakland will be a big indication of what to expect when the series is on the other side of the Mississippi River.

There are just two races left in the opening swing for the 250 West Coast region and this group has proved to be on another level than the rest. Cooper has controlled the championship since the start, thanks to his Anaheim One win and a steady string of top-five finishes. Ferrandis has been the fastest rider on the track every weekend, something that’s impossible to argue when you look at the lap times of each race. And Forkner’s intensity and that he’s the only rider so far to win multiple races has helped him overcome inconsistency. Getting through these last two weekends with as many points as possible will be big, because there will be a lot of time to think about missed opportunities between San Diego and Seattle.

17. Joey Savatgy | The JGRMX/Yoshimura/Suzuki Factory Racing rider will miss an undetermined amount of time due to an ankle injury suffered at the AUS-X Open Supercross in 2019.
19. Justin Bogle | The Rocky Mountain ATV-MC/WPS/KTM rider will sit out an undetermined amount of time due to the concussion he suffered at the Glendale Supercross.
31. Fredrik Noren | The JGRMX/Yoshimura/Suzuki Factory Racing rider is expected to miss the next 12 weeks due to a lower leg injury suffered at the St. Louis Supercross.
49. Chris Blose | The FXR/Chaparral/Honda rider will miss an extended period of time with arm/hip/internal injuries from a crash at the Glendale Supercross.
50. Benny Bloss | The Rock River Yamaha rider will sit out Oakland after suffering a concussion at the Glendale Supercross.
53. Jimmy Decotis | The JGRMX/Yoshimura/Suzuki Factory Racing rider’s stint in the 450 class is over and he will now turn his attention to the 250 East Coast region.
56. Justin Starling | The FXR/Chaparral/Honda team will sit out Oakland.
67. Jerry Robin | The FXR/Chaparral/Honda team will sit out Oakland.
111. Dakota Tedder | The Monster Energy/Team Tedder/KTM rider is still recovering from a year-long wrist injury and is not yet certain when he will return.
421. Vann Martin | The Team AllSouth rider suffered a torn patella tendon in a crash at the St. Louis Supercross and will miss multiple rounds of the series. 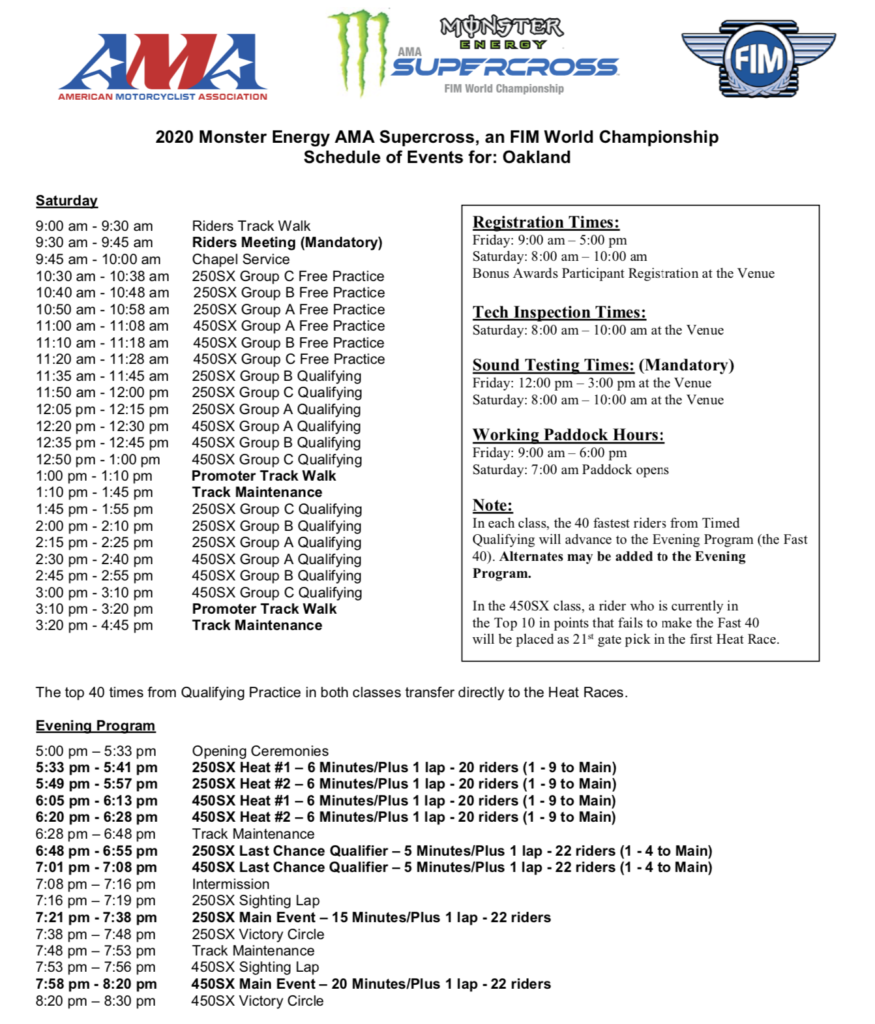 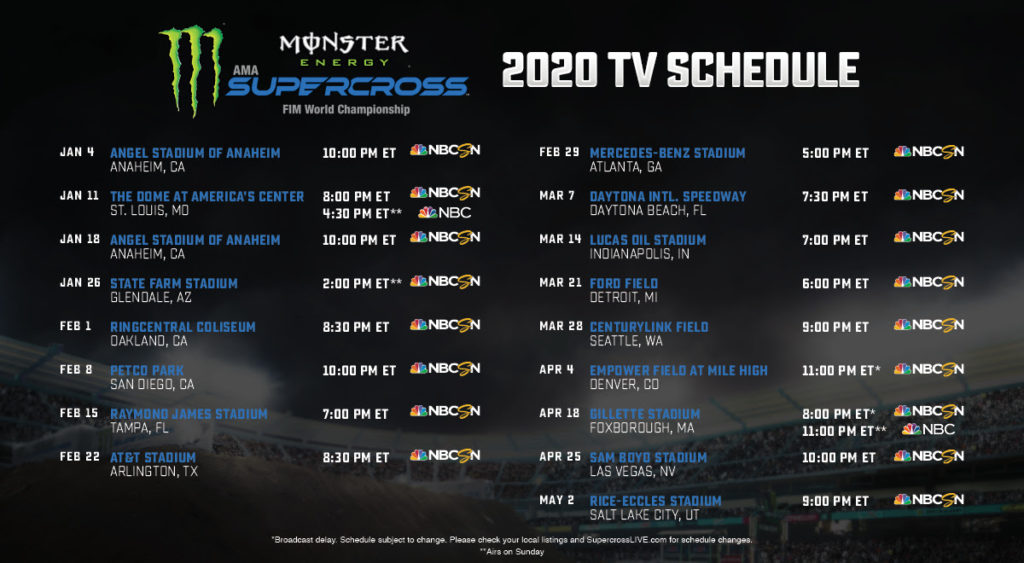 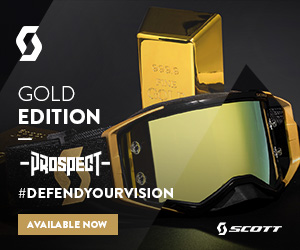 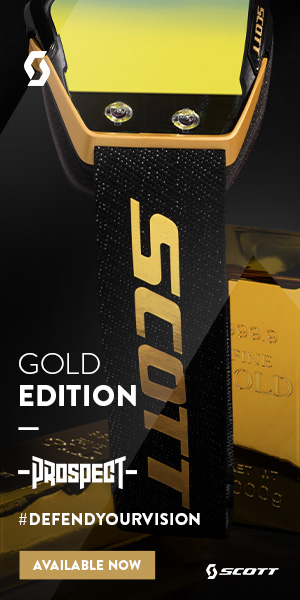