Michael Mosiman and Austin Forkner’s battle for the top spot in 250 Heat Race One set the tone for the night. Rockstar Energy Husqvarna Factory Racing’s Mosiman got the holeshot and led the first few minutes of the moto, but Monster Energy/Pro Circuit/Kawasaki’s Forkner ran a faster pace and closed the gap. A better run through the whoops by Forkner allowed him the chance to make the pass with a minute to go, but Mosiman retaliated immediately and showed Forkner his front-wheel through the next turn. This raised the tension between the two riders, and they exchanged a series of moves that ultimately ended when to Forkner took Mosiman high in a turn, made him come to a stop, and then sped off to the race win.

Penrite Honda riders Mitchell Oldenburg and Luke Clout claimed the top two spots in the running order at the start of the moto, then waged war on each other for the lead. Oldenburg held the early advantage but was soon bumped by teammate Clout in a corner and got overtaken. They exchanged the lead again midway through the race and from that point on, it looked like Oldenburg was clear to pull away to the win. Clout turned his attention to holding his position and made contact with Monster Energy/Star Racing/Yamaha teammates Dylan Ferrandis and Justin Cooper during the moto, which proved to be costly for Cooper. The run-in put Cooper over the top of a turn and stalled his motorcycle. Because it took so long for the bike to crank over, the incoming championship leader dropped out of a transfer position into the Main Event.

Oldenburg looked to have the win on lock when he took the white flag, but Monster Energy/Pro Circuit/Kawasaki’s Cameron McAdoo made a last-ditch push and made a single, stunning pass for the top spot and raced off to the win.

The aforementioned contact with Clout and the bike’s struggle to re-fire caused Justin Cooper to race the LCQ, but the extra time on the track didn’t seem to faze the championship leader. Cooper claimed the holeshot and clicked off a series of steady laps to take one of the four transfer positions into the Main Event. Killian Aiberson, Lorenzo Camporese, and Logan Karnow finish second, third, and fourth respectively, which seeded them into the Main Event.

Alex Martin aced the start, claimed the holeshot, and led the first minute and a half of the night’s 250 Main Event over Cooper, Forkner, and Ferrandis. The JGRMX/Yoshimura/Suzuki Factory Racing rider’s time at the top was ended by Forkner, who had found a speedy line through the sand and snuck to the inside of Martin as the exited to the soft soil type. Ferrandis followed suit soon after and from there, the two title contenders squared off for the win. Forkner had the early advantage, evident in his loose riding style and unrestricted line choices, but he was the first to run into lapped traffic and that proved to be costly in the middle of the race. While Forkner had to plot and pick his way through the slower riders, Ferrandis followed closely behind and waited for the time he felt was right.

The final five minutes of the feature race had a huge impact on the outcome. Ferrandis, who had been faster in the whoops, closed in on Forkner, who slowed momentarily as he looked for a way around a pack of lapped riders. As the two entered the hairpin turn, Ferrandis dove to the inside and took Forkner high, but was sure not to make contact or violate his probation for aggressive. This caused Forkner to duck off the track in a break between the Tuff Blocks and allowed Ferrandis the chance to run off to the race win.

A little further back, Justin Cooper raced his way from an outside gate pick to the top-five and with two laps to go passed Alex Martin, who had held third place for the entire duration of the moto, for the final spot on the podium.

Ferrandis’s win and Cooper’s third-place caused the points lead to change hands, and the defending champion is now back at the top of the standings as the series enters San Diego for the sixth round of the 250 West Coast region. 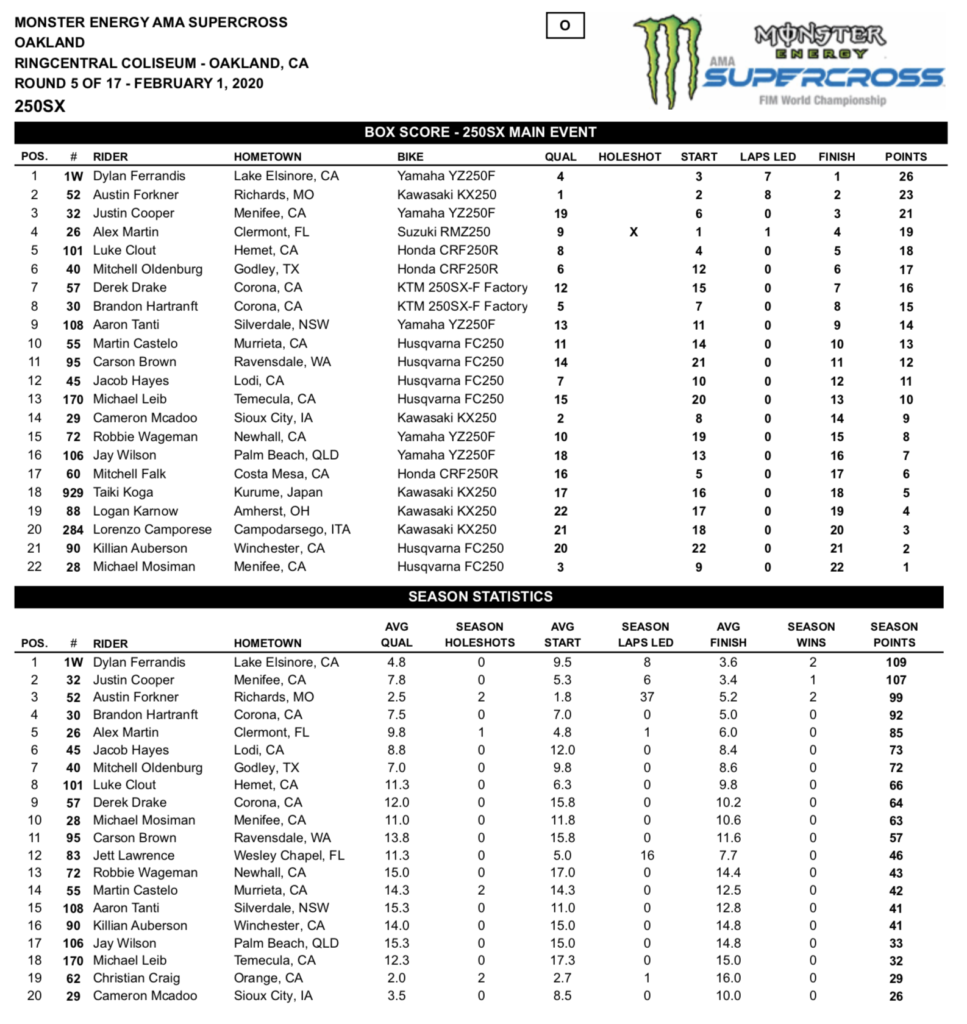 The night’s first 450 race will likely go down as one of the best in all of 2020. Ken Roczen and Eli Tomac squared off at the very start of the race when Roczen got the holeshot, Tomac made a quick and forceful pass in the second turn, and Roczen took advantage of a mistake in the sand by Tomac to reclaim the lead. The two stayed within two seconds of each other through the first part of the race while Blake Baggett followed closely behind and looked for a chance to make a move. Tomac waited until the last two laps of the race to try another pass attempt, but it ultimately ended in him going too deep into a corner, which halted his momentum and allowed Baggett the chance to ride by. Baggett went all-out and nearly got a pass in on Roczen for the top spot, but his eagerness led to a mistake and Tomac got back around and into second place on the final laps.

A mechanical issue in the opening laps put Dean Wilson at a disadvantage and the Rockstar Energy Husqvarna Factory Racing rider spent the whole moto trying to get back to the top-nine. Wilson ultimately missed making the transfer to the Main Event and he was forced to compete in the LCQ.

A good start and tight line through the first turn were all Justin Hill needed in Oakland. The SmarTop/Bullfrog Spas/MotoConcepts/Honda rider snagged the holeshot and immediately stretched out a three-second lead over the field, a gap that shrank when Cooper Webb reached second place. Webb’s lap times were clearly faster, but Hill’s start and early pace allowed him the chance to stay up from and fend off the reigning champion. This was Hill’s first big success of the 2020 season and with the team.

Justin Barcia ran a close third place through the moto and was poised for a transfer directly to the Main Event. Unfortunately, his Monster Energy Yamaha Factory Racing bike started to smoke in the close laps and locked up a few turns from the finish line. With limited time to work, the team did a full engine swap and got him back to the gate in time for the LCQ.

Justin Barcia and Dean Wilson were the only two factory-backed riders in the LCQ, which made for a stressful situation. Barcia got himself into the lead on the opening lap and pulled away without much resistance, while Wilson was shuffled further in the running order and had to race his way up to the second place.

With those two up front and Cade Autenrieth in third place, attention turned to the battle for the final transfer spot. Jason Clermont held the spot with a minute and a lap left in the race, but Alex Ray’s quicker lap times erased the gap between them. It took until the final lap for Ray to be close enough for a pass attempt, and after two counter-attacks by Clermont, Ray made the pass and went on to the final spot on the starting line.

The Eli Tomac-Ken Roczen battle in the Heat Race carried over into the Main Event and with the much longer moto, fans were treated to the two riders at their best. Roczen got the holeshot and immediate lead while Tomac was passed his Monster Energy Kawasaki teammate Adam Cianciarulo in the second turn and pushed back to third place. The trio stayed within sight of each other through the first eight minutes of the race and put a sizeable gap on the rest of the pack, including fourth place Cooper Webb, but Tomac soon took the intensity up a notch and went after the other two. First was a close pass on Cianciarulo in a bowl turn, a strategic move that the rookie couldn’t answer back on. Three minutes later, Tomac reeled in Roczen with a better pace through the whoops and blocked the Team Honda HRC rider in the next berm for the lead. The battled seemed settled at this point, as Tomac had the spot and was able to inch away from Roczen, but a mistake in the sand section caused Tomac to overshoot the next turn and he went off track, which gave Roczen back the lead. Undeterred by the error, Tomac went back to work, got to Roczen’s rear fender, and made another pass for the lead in the exact same turn with two minutes to go. From there, it was Tomac alone up front and he claimed his second win of the season.

Cooper Webb’s pace in the last half of the race was key for the Red Bull KTM rider. Fourth for all of the moto but a fair bit behind the lead three, Webb managed to close in on Adam Cianciarulo and got by the rookie with a forceful pass in the final minutes. On the podium but still in pursuit of more points, Webb went after Roczen and made the last lap a battle. It came down to the very last turn, and when Roczen cut down to block the inside line, Webb swung wide, hit the brakes, and dove into the small opening that Roczen left between himself and the inside Tuff Block. It was barely enough room and the two made contact, which forced Roczen to bobble and allowed Webb to steal second place away at the checkered flag. 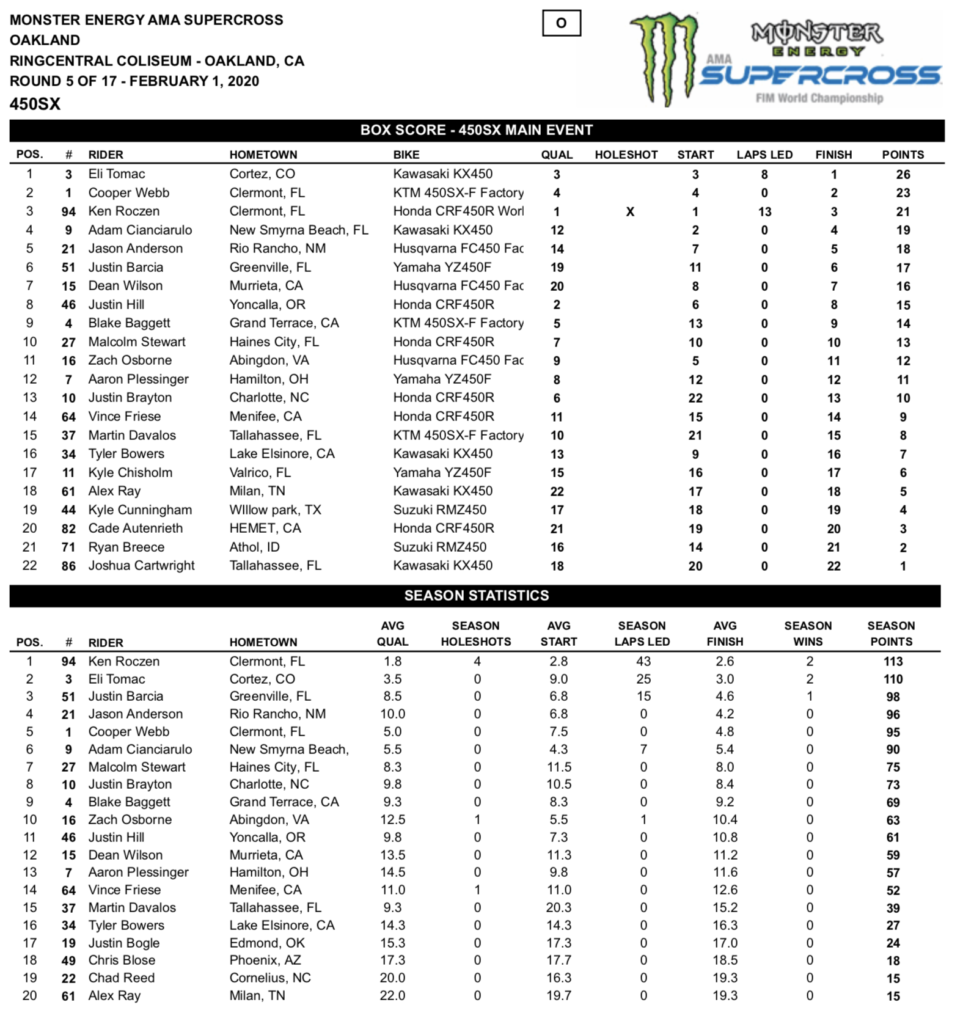