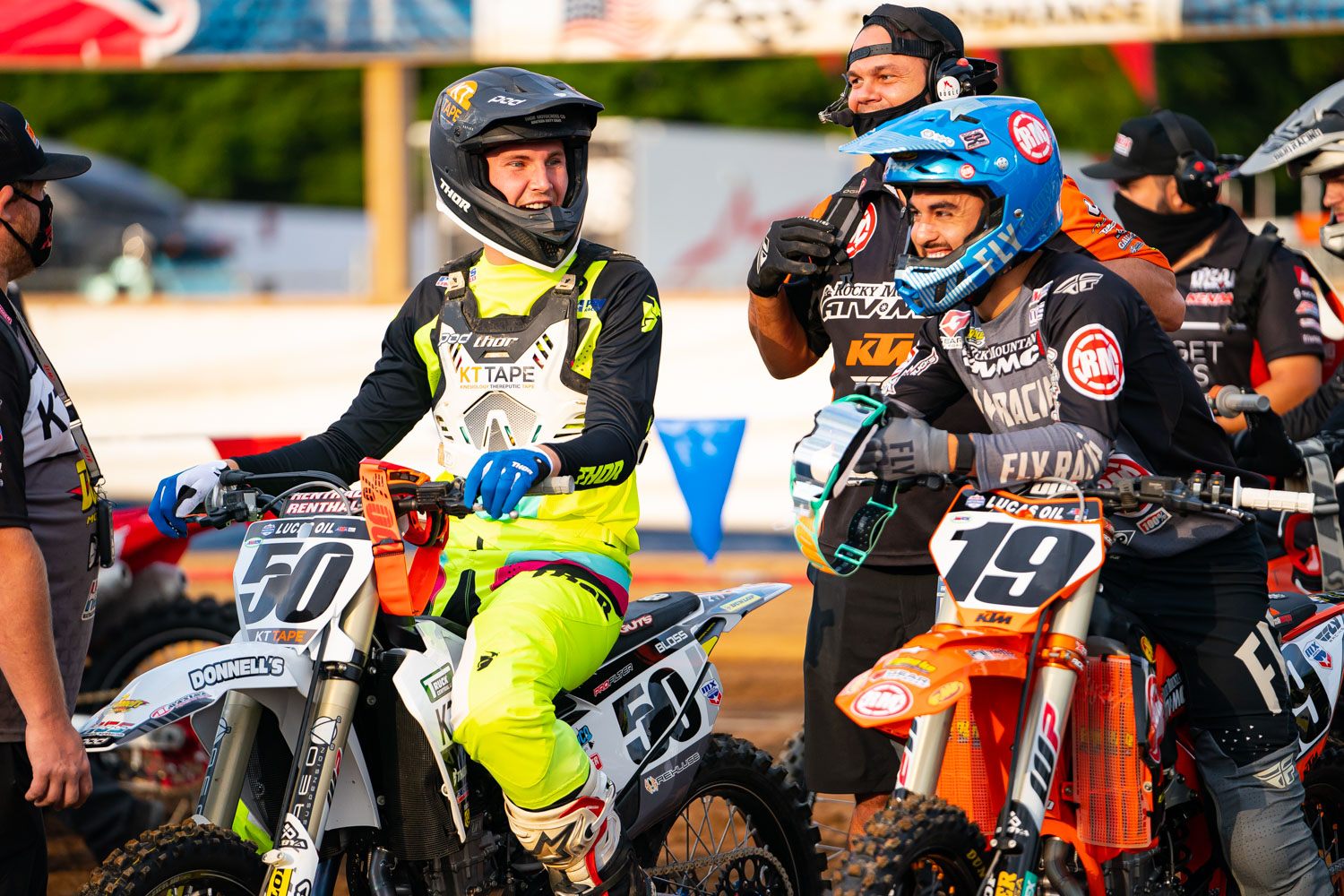 Back at the track. After two days off, the 2020 Lucas Oil Pro Motocross Championship is back in action with the 2020 RedBud Motocross, round five of the summer series. With Friday’s race still fresh on everyone’s mind (and muscles), riders know that they need to put in solid results before an extended break and then the push through the final part of the year.

Heavy rains were forecasted to hit the Michigan track on Sunday night and Monday morning, but the weather front missed the area completely. Instead, riders were welcomed with a fast and dry circuit to spin laps on in the morning’s Timed Qualifying Sessions. 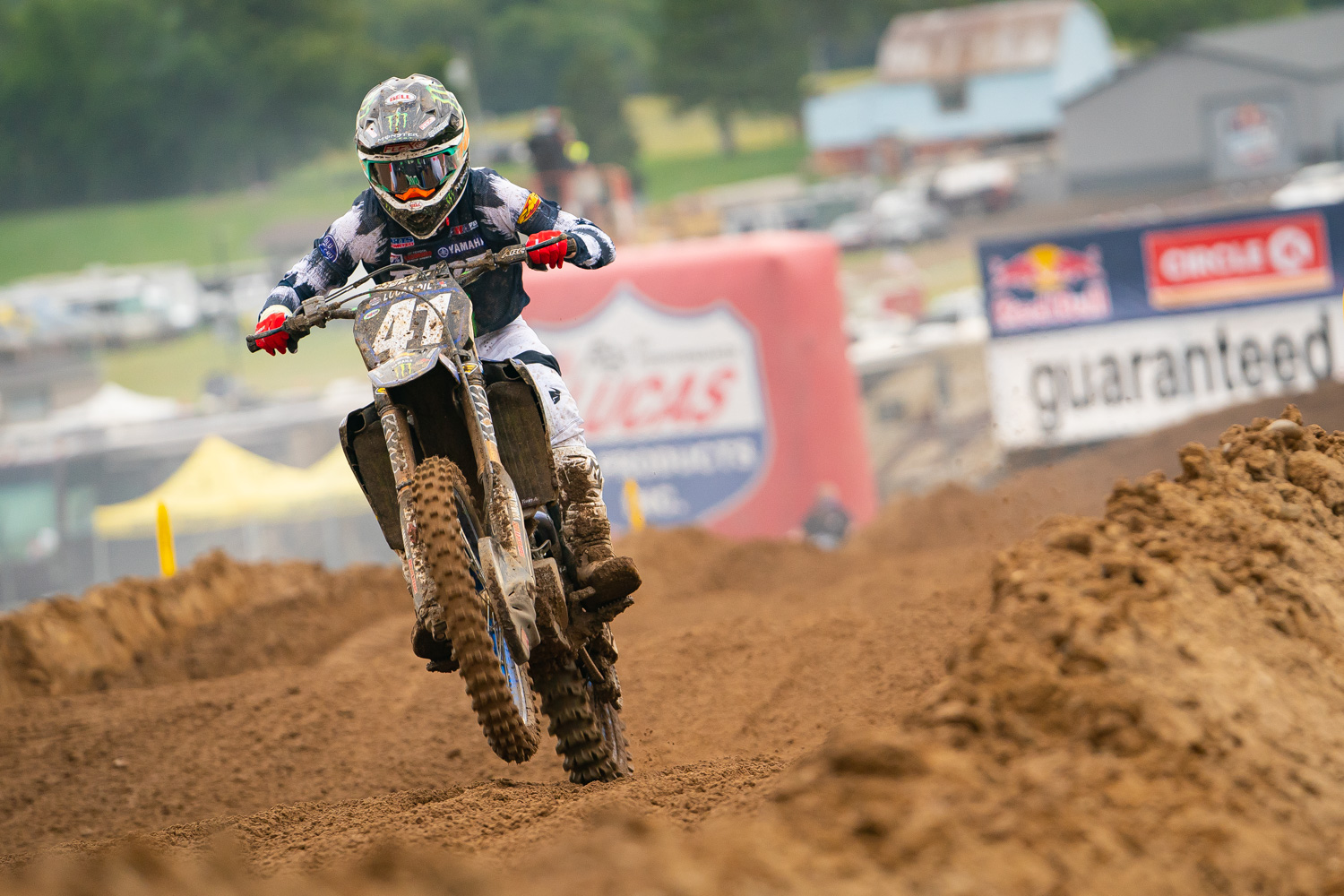 Looks like Friday wasn’t a fluke. Ty Masterpool figured out the fast lines on the RedBud track in the First Timed Qualifying Session and the 2:06.510 lap by the Monster Energy/Star Racing/Yamaha rider proved to be the fastest of the 250 Class.

Dylan Ferrandis comes into the day’s race with a clear agenda: run at the front of the field and score as many points as possible for the championship. There were some questions about how the Monster Energy/Star Racing/Yamaha rider would fare after Friday’s crash, but that ultimately wasn’t an issue and with a 2:07.047 in the Second Timed Qualifying Session, Ferrandis was second overall.

Justin Cooper was another quick learner in Monday morning’s practice and a 2:07.443 in the First Timed Qualifying Session put the Monster Energy/Star Racing/Yamaha rider third overall.

Shane McElrath completed the Monster Energy/Star Racing/Yamaha 1-2-3-4 with a 2:07.650 lap in the Second Timed Qualifying Session. That is an impressive feat for the Star Racing squad.

Who was the fastest rider not on a blue bike at RedBud? That’d be Monster Energy/Pro Circuit/Kawasaki’s Mitchell Harrison, thanks to a 2:07.846 time in the First Timed Qualifying Session.

Jeremy Martin comes into this race as the new leader in the championship standings. A 2:08.572 lap put the GEICO Honda rider eighth overall. 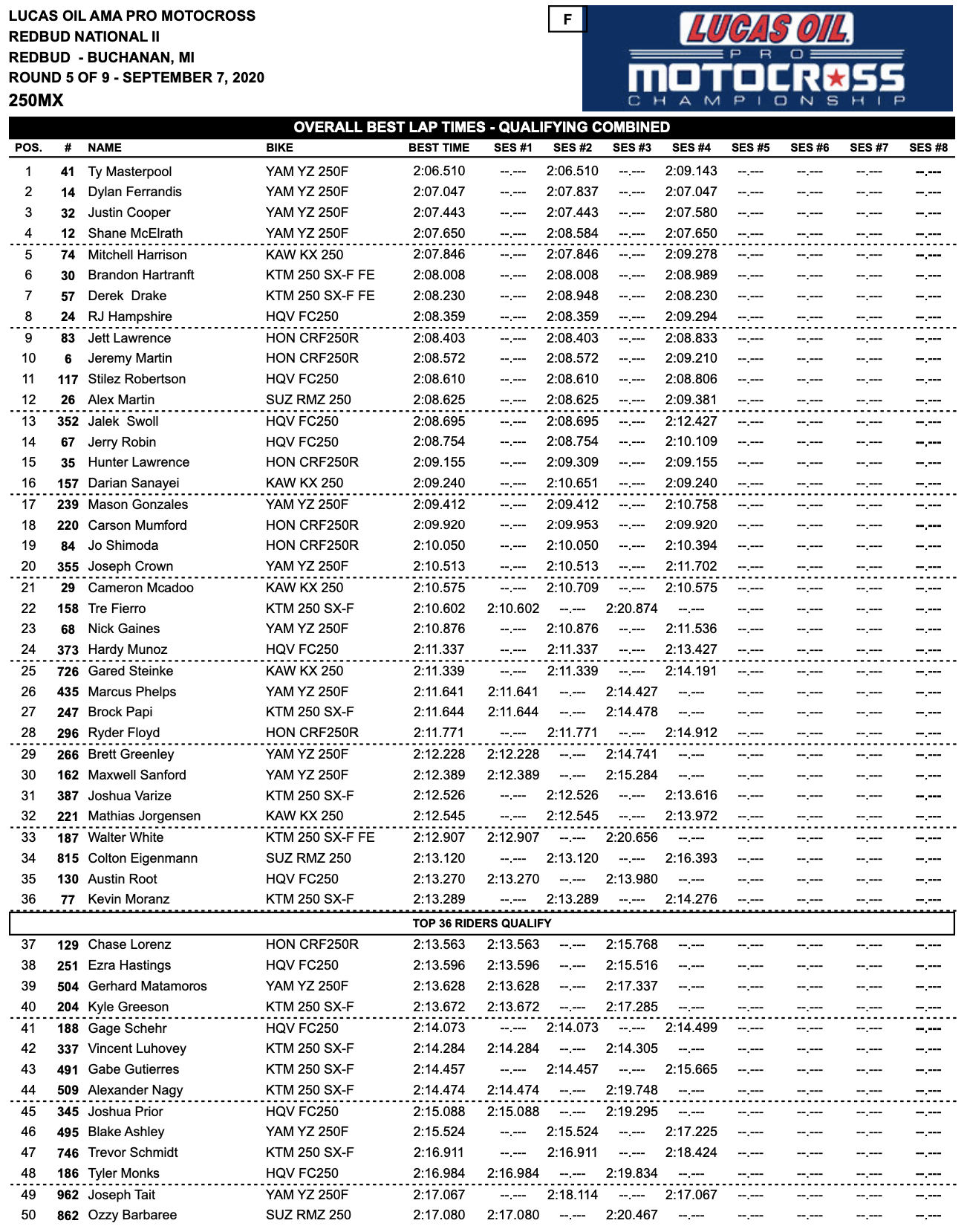 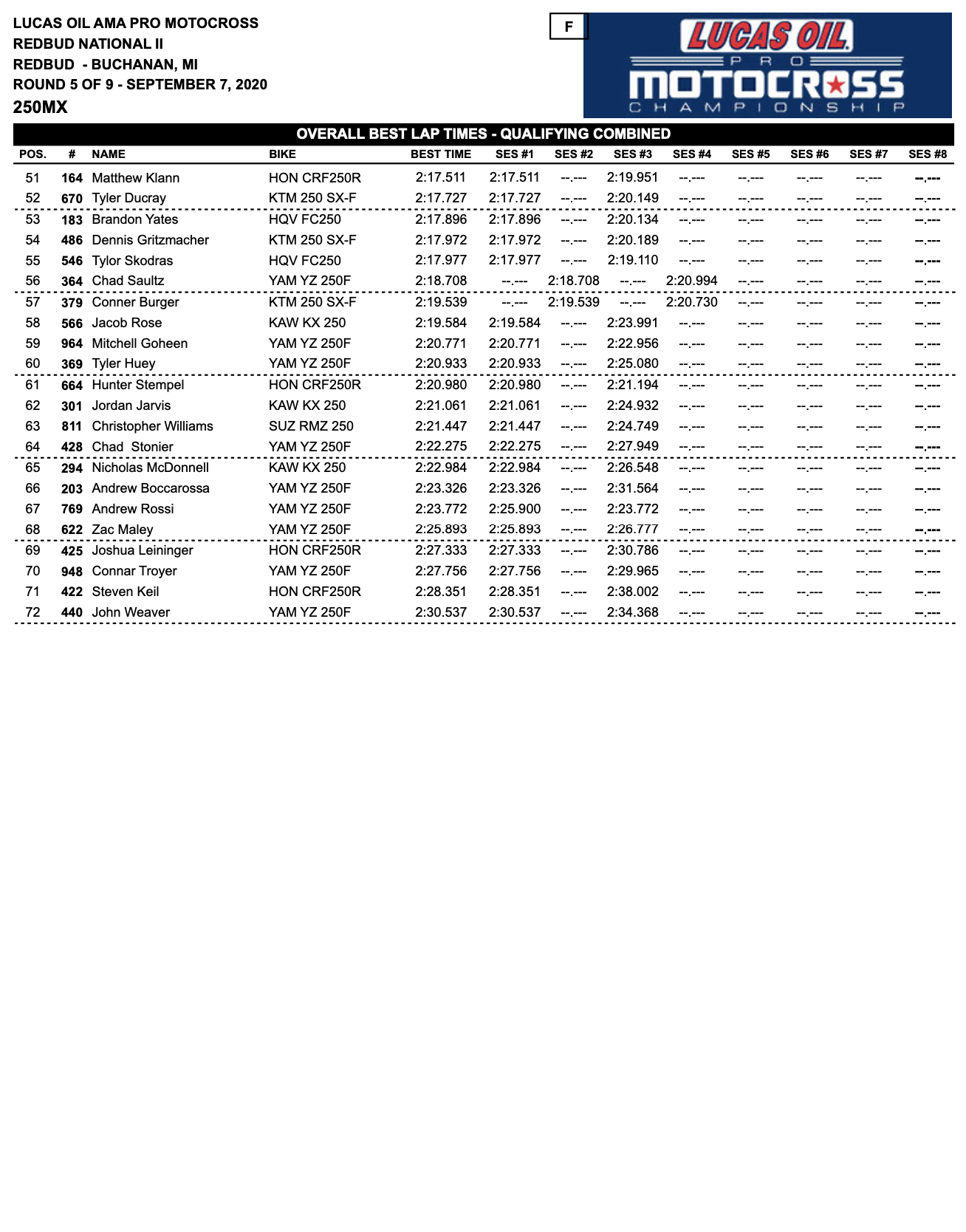 Marvin Musquin has been near the front more often than not this season and the Red Bull KTM rider was the fastest of the entire field during the Monday morning sessions, thanks to a 2:03.783 lap in the Second Timed Qualifying Session.

Joey Savatgy has been quietly quick through the first four rounds of the season, a solid sign for a rider that spent most of the last year sidelined with an ankle injury. The JGRMX/Yoshimura/Suzuki Factory Racing rider made a statement in the First Timed Qualifying Session with a 2:04.166 lap, which was the fastest of the first outing and ultimately put him second overall.

It was an eventful morning for Adam Cianciarulo. It started with a hard slam in the First Timed Qualifying Session (he landed on the bike of a downed rider and went over the bars) and then a major mechanical issue with his own motorcycle. The Monster Energy Kawasaki crew quickly swapped out parts between sessions and he was back on the line for the second go-around, where a 2:04.309 time put him third.

Another RedBud, another results sheet with Blake Baggett near the top. The Rocky Mountain ATV-MC/WPS/KTM rider was fourth fastest after a 2:04.592 in the Second Timed Qualifying Session.

Team Honda HRC’s Chase Sexton looks to back up his podium finish from Friday’s race. Things started off well on Monday, as the rookie rider was in the top-five after a 2:05.075 lap in the Second Timed Qualifying Session. 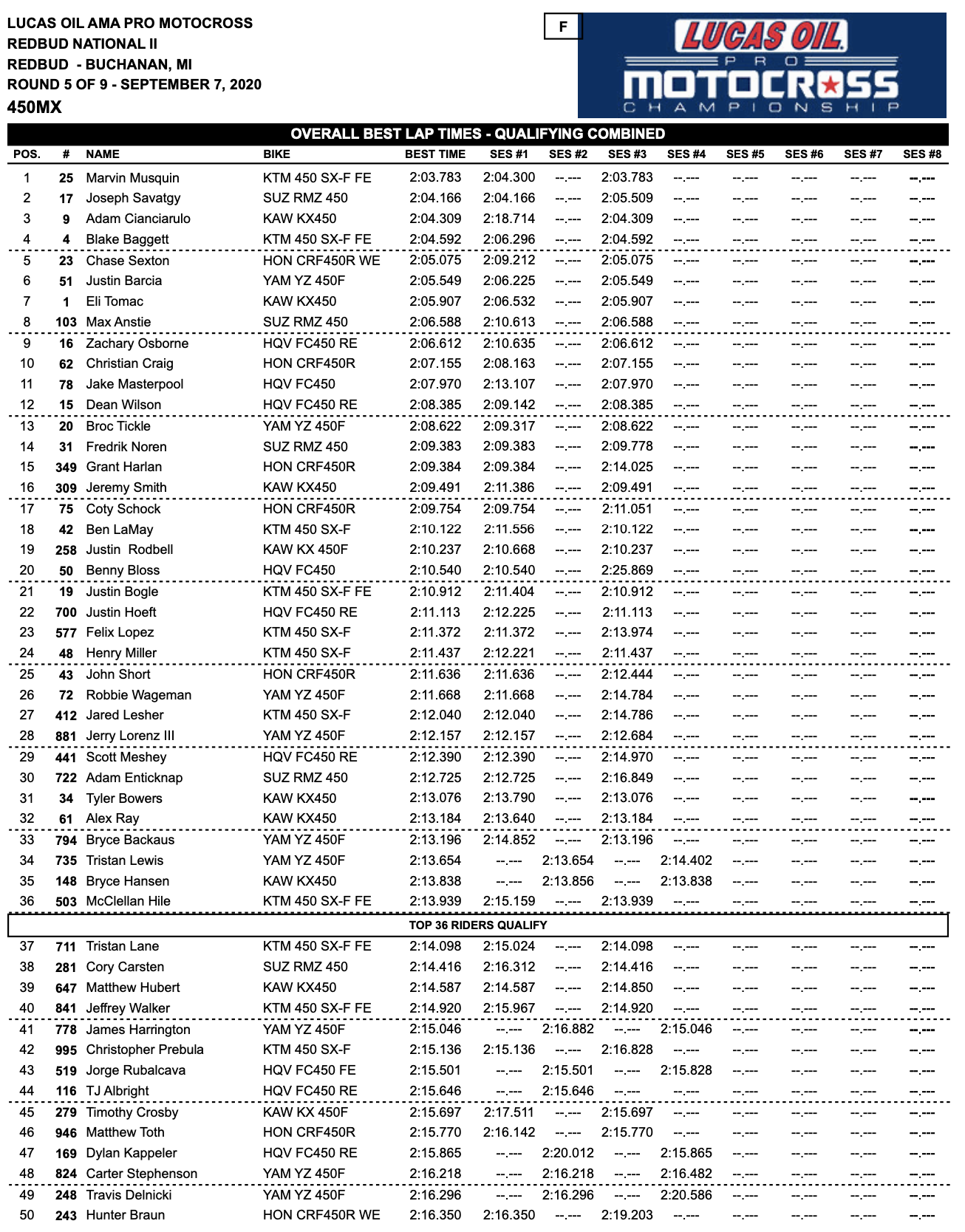 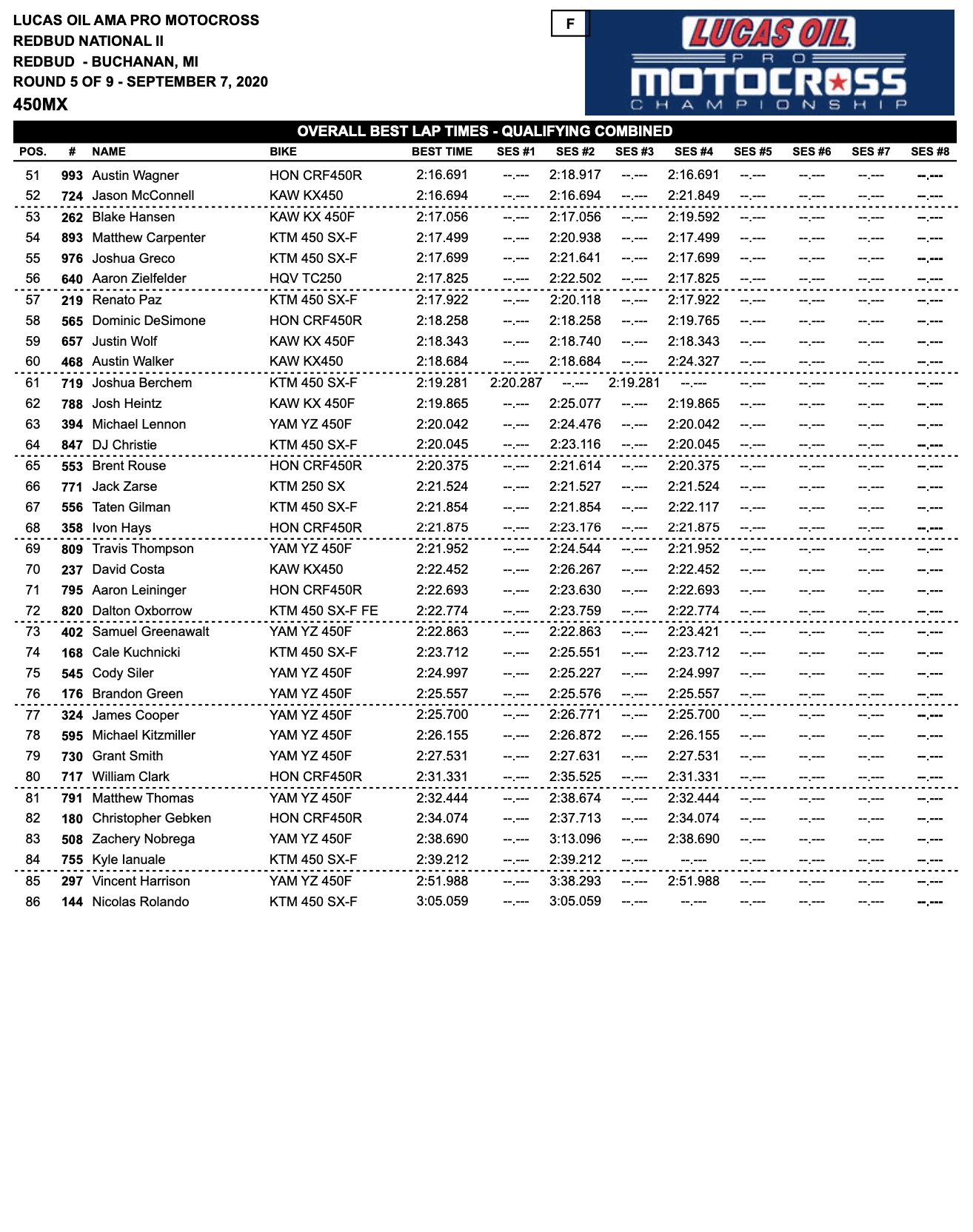