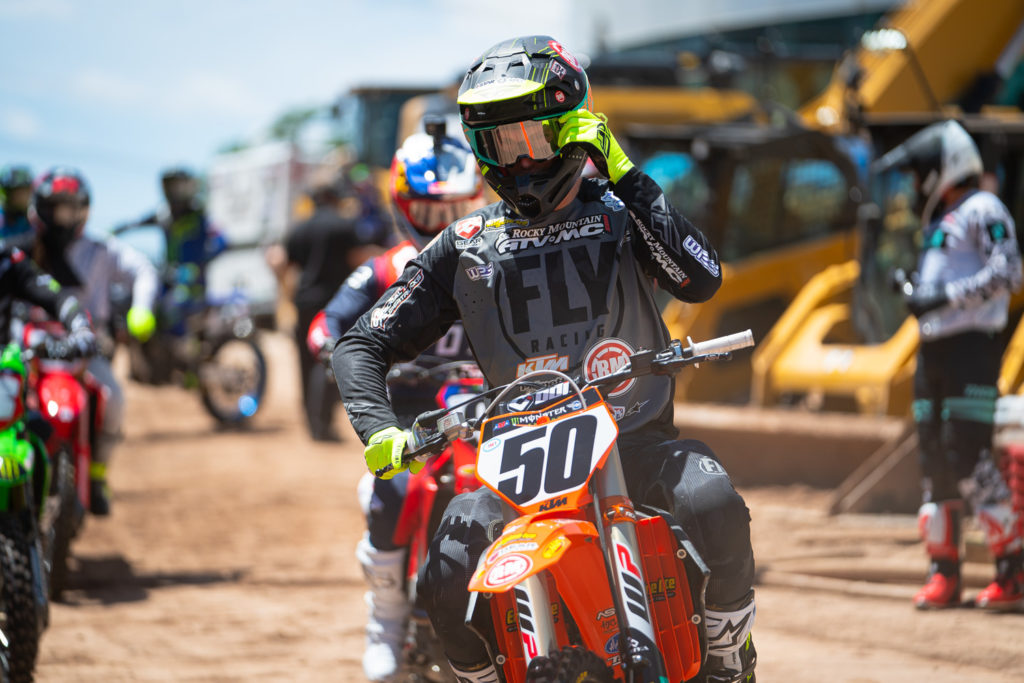 Sit down the stopwatch because Timed Qualifying is complete at the 2020 Salt Lake City Five Supercross. Round fifteen of the 2020 Monster Energy Supercross Series is shaping up to be another battle to the end and the afternoon at Rice Eccles Stadium allowed everyone in the field their chance to learn the all-new layout that is much different than anything seen prior during our extended stay in Utah. With lap times of the front-runner ranging between 43 to 45 seconds, expect two more Main Events with high lap counts. 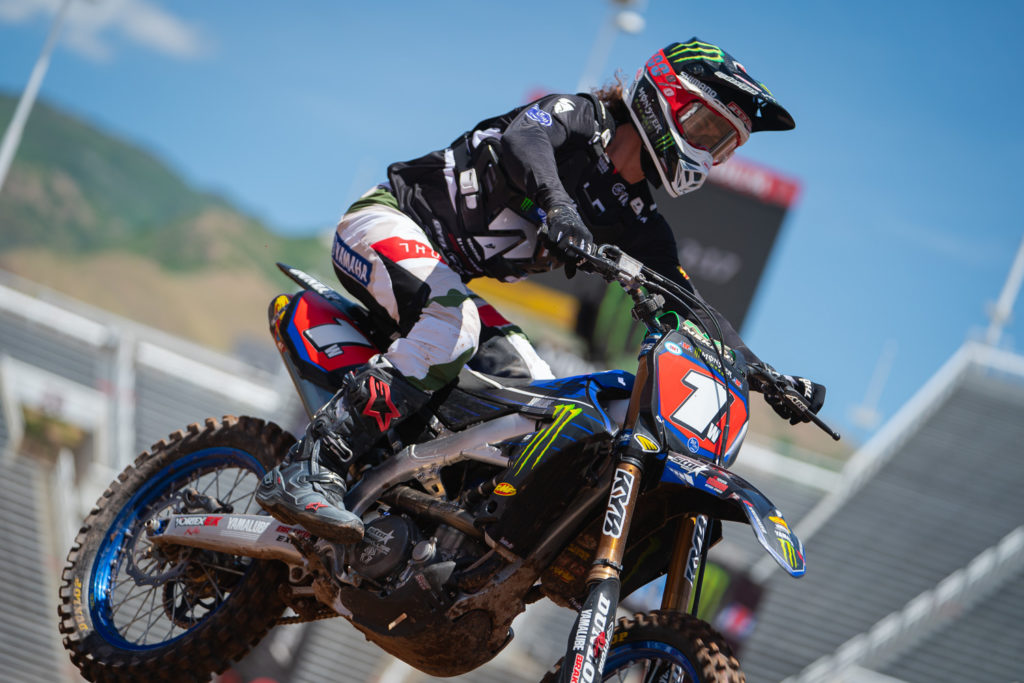 Seems like Dylan Ferrandis figured out the track faster than anyone. The Monster Energy/Star Racing/Yamaha rider posted his quickest lap, a 43.890, during the first Timed Qualifying session and it wasn’t bested by anyone in the 250 Class through the rest of the day. Even Ferrandis didn’t come close to it in the second outing…

Jett Lawrence’s learning curve is impressive. After a tumultuous return to action Wednesday, the GEICO Honda rider focused on putting in a fast time during the afternoon and was second on the sheet thanks to a 43.909; this lap was the best of anyone in the second Timed Qualifying session for the 250 Class.

There’s a set of big whoops right after a hairpin turn on today’s track, so it was no surprise Christian Craig was near the top of the times. The GEICO Honda rider’s 44.187 in Session Two of Timed Qualifying put him third in the class.

Austin Forkner was fourth overall in Timed Qualifying with a 44.373 lap in Session Two. Sunday afternoon wasn’t as eventful for the Monster Energy/Pro Circuit/Kawasaki rider as Wednesday was and he seemed to stay to himself through the practices. Keep an eye on him in the night’s race, because he has to make something happen and pull points away from Ferrandis for a chance at the championship.

Michael Mosiman was the fifth-faster rider in the 250 Class with a 44.677 time in Session Two. Can’t think of much that happened to the Rockstar Energy Husqvarna Factory Racing rider during practice, except for the nose-case that he somehow saved in the middle rhythm section. 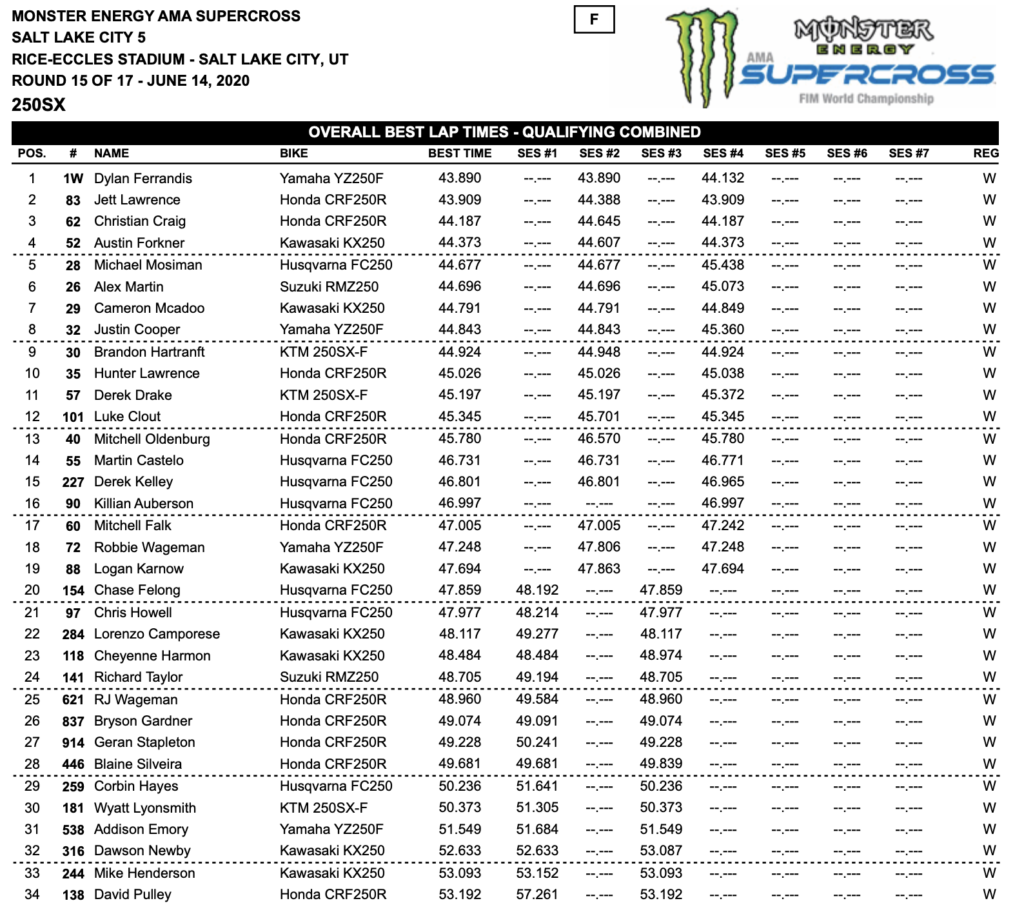 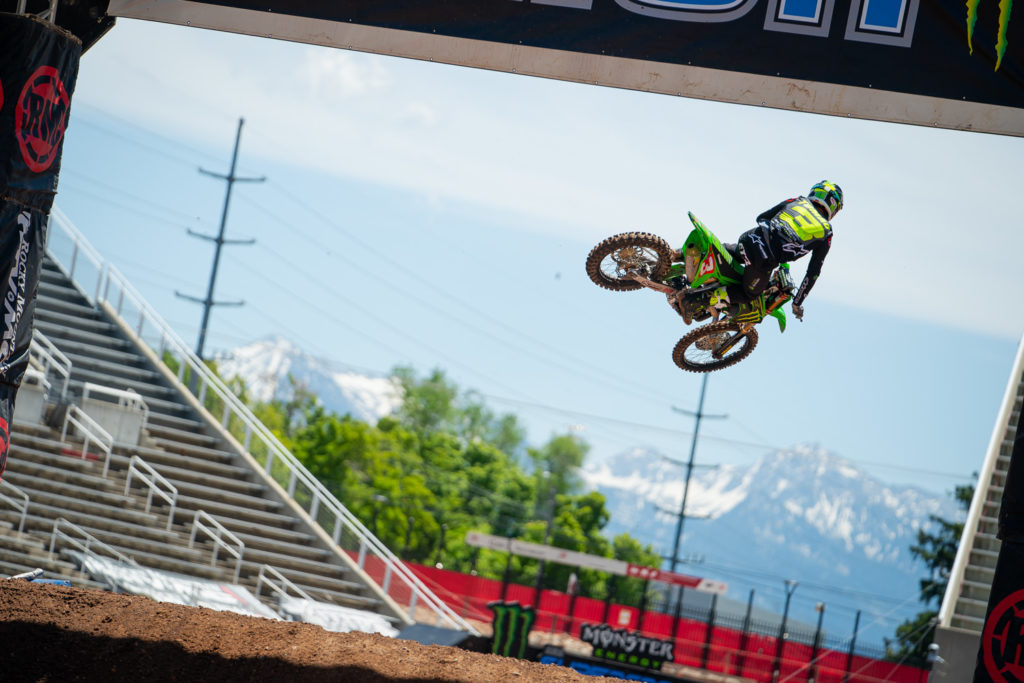 Eli Tomac waited until the last few minutes of the second Timed Qualifying session to really push his Monster Energy Kawasaki and was rewarded with a 43.557 time. That’s not to say that Tomac wasn’t fast in the first session, because he put down a 43.961 lap then. He’s won the last two Sunday races. Will this be three?

Not gonna lie, we thought Live Timing glitched during the second round of Timed Qualifying. Why’s that? Because Benny Bloss went to the top of the board with a 43.704 lap in the middle of the session and was quite a bit quicker than anyone else in the class. When the Rocky Mountain ATV-MC/WPS/KTM rider put in a 43.833 lap a few moments later, it became clear that the first lap was legit. Bloss ended the afternoon second overall.

Jason Anderson was on the gas during Sunday’s session. The fastest 450 guy in the early Free Practice, Anderson stayed near the top of the board through the rest of the afternoon and was ranked third with a 43.788. Does he back up last Sunday’s podium performance with another trophy?

Dean Wilson has been fun to watch in Timed Qualifying during the stay in Utah. The Rockstar Energy Husqvarna Factory Racing rider was the fastest of the field in session one, then backed it up with more fast laps in session two. A 43.824 time put Dean fourth overall.

Ken Roczen is being very forthcoming with his health issues, but when it’s time to go for a fast lap, the Team Honda HRC is able to push the problems aside and twist the throttle. A 43.860 in session two of Timed Qualifying was the fifth-fastest of the 450 Class. 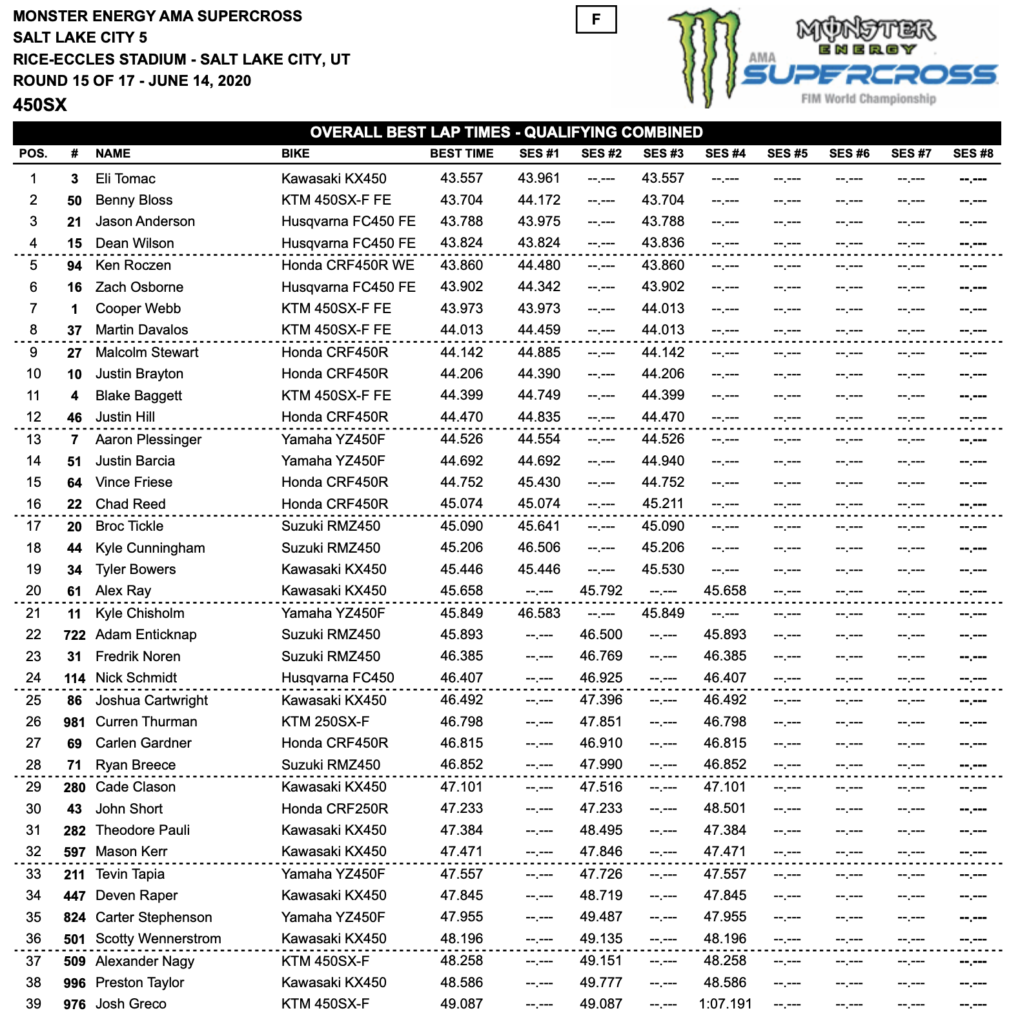