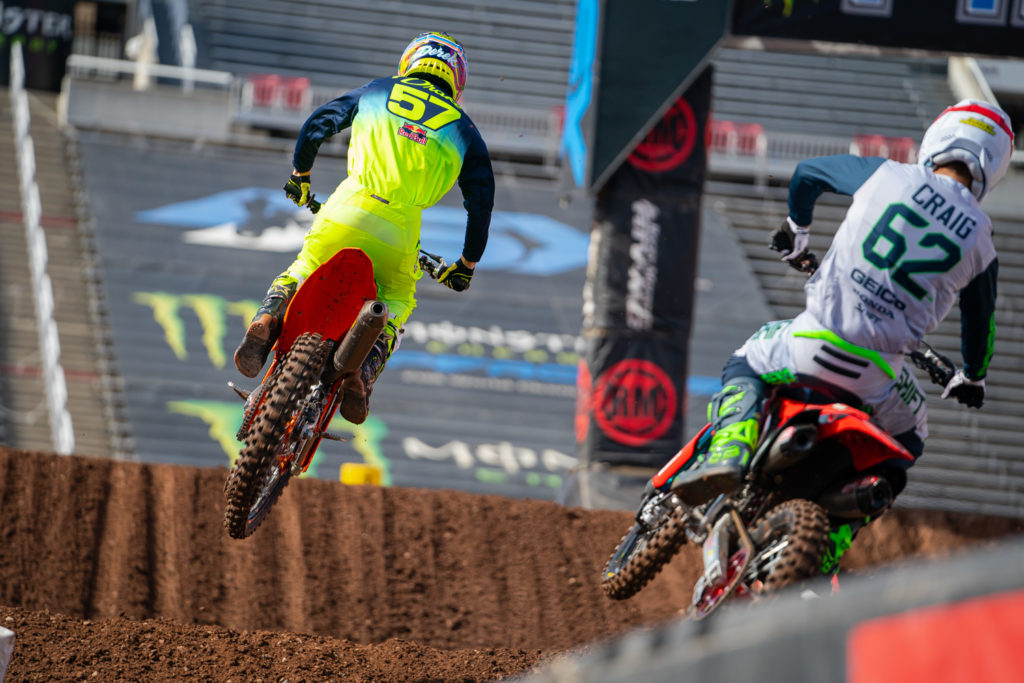 Jett Lawrence shot off the starting line like a rocket when the gate dropped at the start of the first race of the evening, but he went wide in the first corner and was pushed into the Tuff Blocks by Austin Forkner. Justin Cooper, meanwhile, hugged the first corner and escaped with the lead. Forkner crashed back into the field a few corners later, and found himself behind Jett, who had recovered from his first-turn spill. The two traded positions a couple of times, with the most exciting of the melee coming from Lawrence, when he pushed Forkner off the track just before the finish line corner. The effort was all for naught, however, as the younger Lawrence mistimed a section soon thereafter and was repassed by Forkner. Meanwhile up front, Cooper scored a convincing win well ahead of Alex Martin, Hunter Lawrence, and Forkner.

“I ran out of breath in our first race in Salt Lake City and I have been trying to stay relaxed today,” said Cooper. “I felt much better out there just now and I hope to race more like myself out there tonight.”

Dylan Ferrandis snared the holeshot at the start of the second heat race, but he cased a triple on the first straightaway and was forced to ride wide in turn two, leaving the door wide open for his competitors. Cameron McAdoo dove beneath the defending champion and took the lead, pushing Ferrandis into the Tuff Blocks, Ferrandis went down and remounted at the back of the pack, but made quick work of the field and got back into qualifying position within two laps. A mistake from McAdoo allowed Derek Drake and Christian Craig to slip by at the front of the pack. A great pass by Craig saw the GEICO Honda rider take over the lead in the flat corner before the finish line. McAdoo also worked past Drake and set his sights on his former teammate and training partner, but the veteran held on for his second heat win of the Salt Lake City reboot. TLD KTM teammates Drake and Brandon Hartranft led Mitchell Oldenburg, Michael Mosiman and Ferrandis across the finish line.

“I didn’t start up in front but I made a couple of passes and got to the front,” said Craig. “I felt like I rode super tight out there and was clipping all of the landings. Hopefully, I got all of that out of the way.”

When the gate dropped at the start of the 250 LCQ, Geran Stapleton blasted off the line with a big holeshot. With a clear track ahead of him, the Australian rode off uncontested for the win. Completing the international sweep of the top spots was Italian Lorenzo Camporese. Chris Howell and Logan Karnow rounded out the qualifiers for the 250 main.

Ferrandis snared the holeshot from his terrible outside gate pick and led Craig, Hunter Lawrence, Forkner, and McAdoo onto the track. Ferrandis immediately began to pull a lead on Craig, who had his hands full with a hard-charging Forkner. The Kawasaki rider dove beneath Craig to take over second on the fifth lap, and he set his sights on the Frenchman. Craig washed the front end of his Honda while holding down third and McAdoo took over in third.

Just past the halfway point of the main, Forkner closed to the rear wheel of Ferrandis and took over the point position with an aggressive block pass that sent the Yamaha rider off the track momentarily. While Forkner pulled out a comfortable lead over Ferrandis, the battle for third heated up considerably as Jett Lawrence sliced his way past McAdoo and then Mosiman to take over the final podium position. Mosiman put up a big fight, retaking the position momentarily with an aggressive block in the corner before the finish line, but the younger Lawrence let it all hang out in the whoops to find his way past for good.

Forkner crossed the finish line with a nearly two-second lead over Ferrandis and closed the points gap between him and Ferrandis to seven. Jett Lawrence earned the first Supercross podium of his young career in third.

“I felt really good out there,” said Forkner. “That was one of the best Supercross races of my life. It was easy to make a mistake out there. The two flat turns were like glass and you had to be patient. That was a good race for me.”

“I can’t complain about the pass he made on me,” said Ferrandis. “It was a bad race for me. I saw a yellow flag and didn’t know if I could jump and that cost me some time.”

“Once I crossed the finish line I have to admit that I cried a little bit,” said Lawrence. “I know it’s a third but I am thankful, It feels very good.” 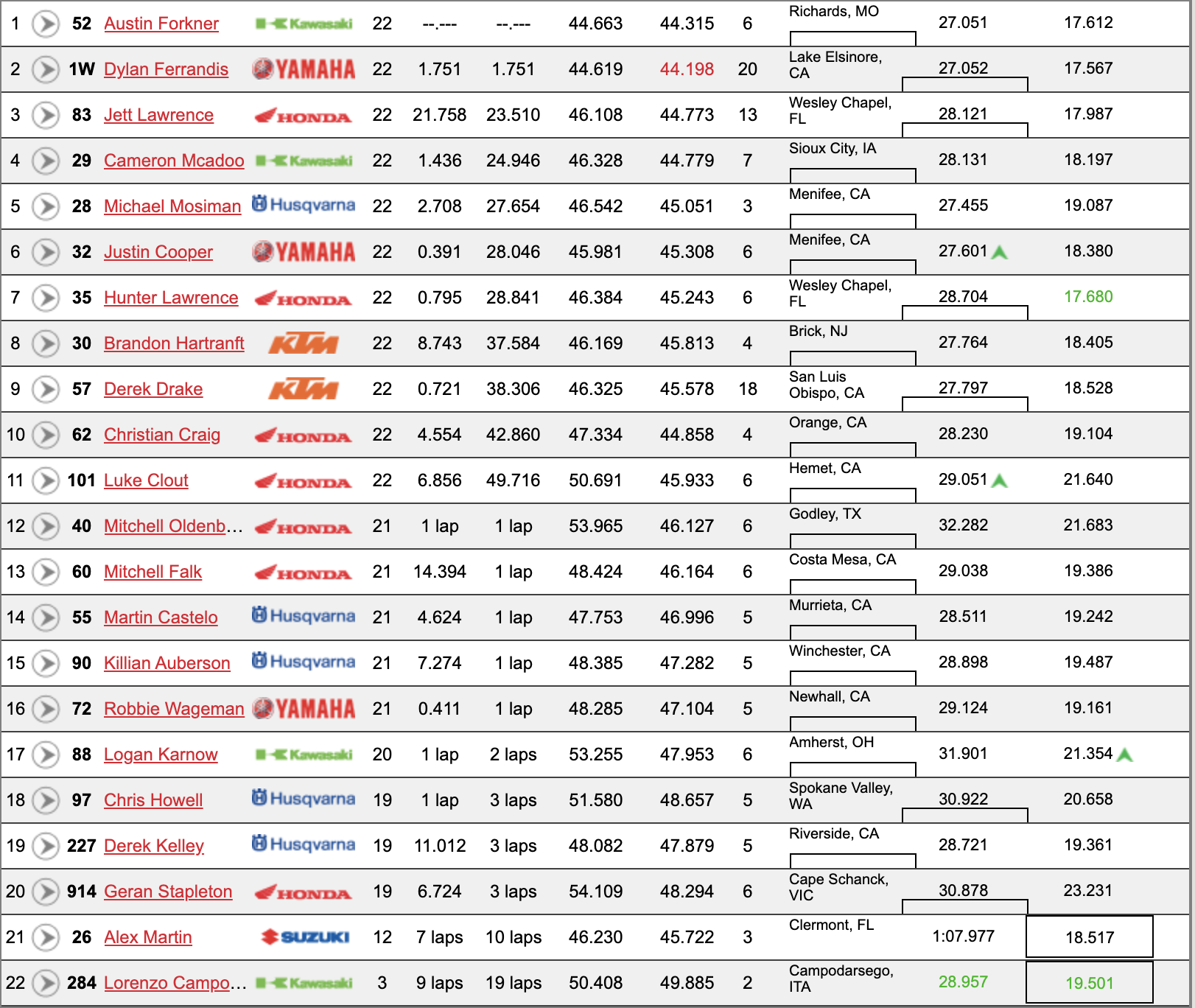 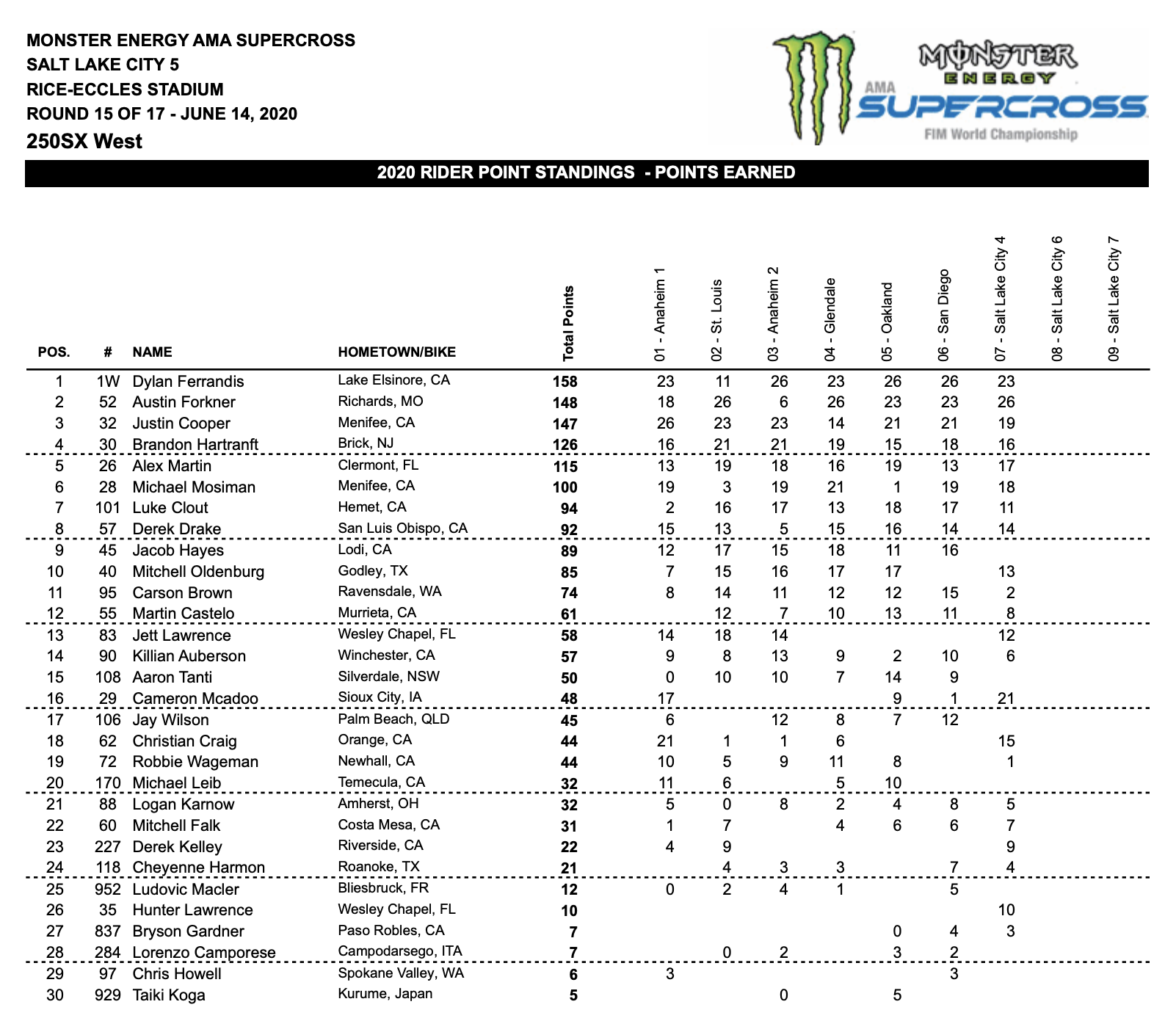 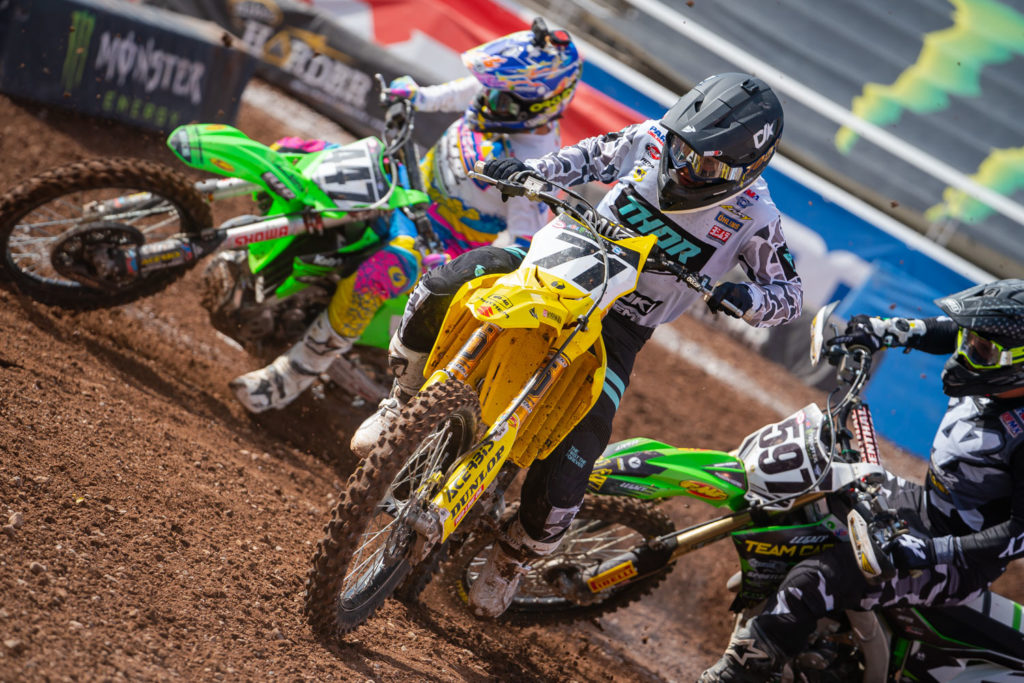 Chad Reed led the field through turn one on his Mountain Motorsports KTM, but Martin Davalos went around the outside of Reed in turn two and took over out front on his Tedder Racing KTM. Benny Bloss also moved past Reed on lap one and held down second, comfortably. Davalos looked to have the race well under control, but he pushed the front end on the next-to-last lap and went down in a rutted corner and surrendered the lead to Bloss. Wilson made a massive challenge for the lead soon thereafter and he and Bloss traded the lead a couple of times on the last lap. Bloss prevailed and earned the first 450 heat race win of his career. Wilson, Justin Barcia, Reed, and Zach Osborne followed suit. Adam Enticknap held on to ninth for his first direct transfer of the season.

“Martin was in the lead and I was a smooth, steady second, and when he went down I got into the lead, ” said Bloss. “Then Deano got by me and I said, ‘There’s no way. I am this close to my first-ever heat race win!’ This is the coolest feeling of my life.”

Ken Roczen led Malcolm Stewart and Eli Tomac through the first corner and the German rider checked out on his Jordan Troxell-tuned Honda. While the battle for second between Stewart and Tomac demanded the lion’s share of attention, Jason Anderson worked past Cooper Webb to take over the fourth position. Tomac found his way past Stewart with two laps to go and set his sights on Roczen. Tomac turned in the fastest lap of the race as he chased down the leader, but it was too little too late. Roczen crossed the finish line victorious and was followed by Tomac, Stewart, Jason Anderson and Cooper Webb.

“It feels good to get out and ride hard and get my heart rate up and breathe hard,” said Roczen. “I’ve had a few days to recover and I hope to feel strong in the main event.”

Broc Tickle led the way through the first corner of the LCQ and narrowly avoided a pileup behind him that included Alex Ray, Carlen Gardner and Kyle Cunningham. Blake Baggett wasted little time displacing Tickle at the front of the field and raced off with a solid win. Tickle, nursing a broken throttle hand, rode strong and held onto second. Ryan Breece and Mason Kerr earned the final tickets to the main event,

Tomac led the way into the first turn at the start of the main, bt Webb dove beneath him, and took over with authority. Tomac bobbled in the exchange and slipped into the middle of the pack. Roczen and Anderson pursued the leader, but Anderson crashed spectacularly out of the lead pack. Up front, Roczen applied the heat to Webb, and done beneath him in the deeply rutted corner the leads to the last straightaway before the finish line. Once into the lead, Roczen pulled out an immediate two-second lead. On lap eight, Malcolm Stewart took over third with a great block pass on Zach Osborne. Sadly, Stewart’s time in podium position came to an end on the very next lap when Tomac passed him in the same corner he had overtaken Osborne in.

Up front, Roczen built up a nearly four-second lead and looked buttery smooth as he controlled the race on his Honda CRF450R. At the checkered flag, Roczen enjoyed 3.140-second advantage over Webb, while Tomac cruised home some ways back. Osborne found his way past Stewart late in the race and came home fourth, while Stewart still enjoyed his career-best finish in fifth.

“It’s been a big, big turnaround for me after the previous races,” said Roczen. “We tuned up the bike a little bit and I have made some progress physically. It was a good race for me today winning the heat and main event. I’m just really happy.”

“The holeshot was huge tonight, but Kenny was riding really well,” said Webb. “I sat there in second and knew about Kenny’s physical condition and thought he might fade, but he held it in there.”

“Overall it was a good race, I started to get a little squirrely in the whoops towards the end of the race,” said Tomac. “I went a little conservative late in the race, and rode it home.” 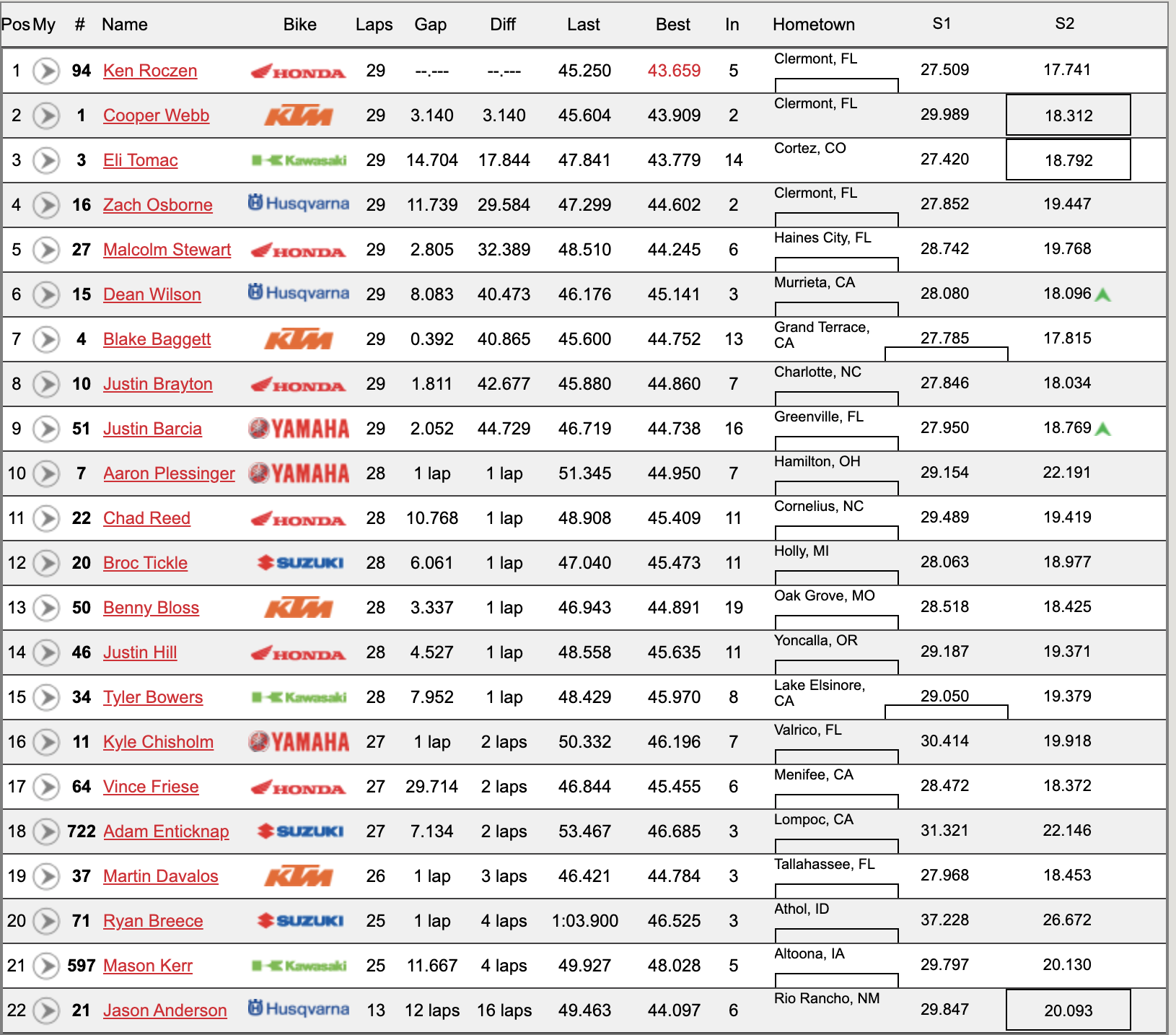 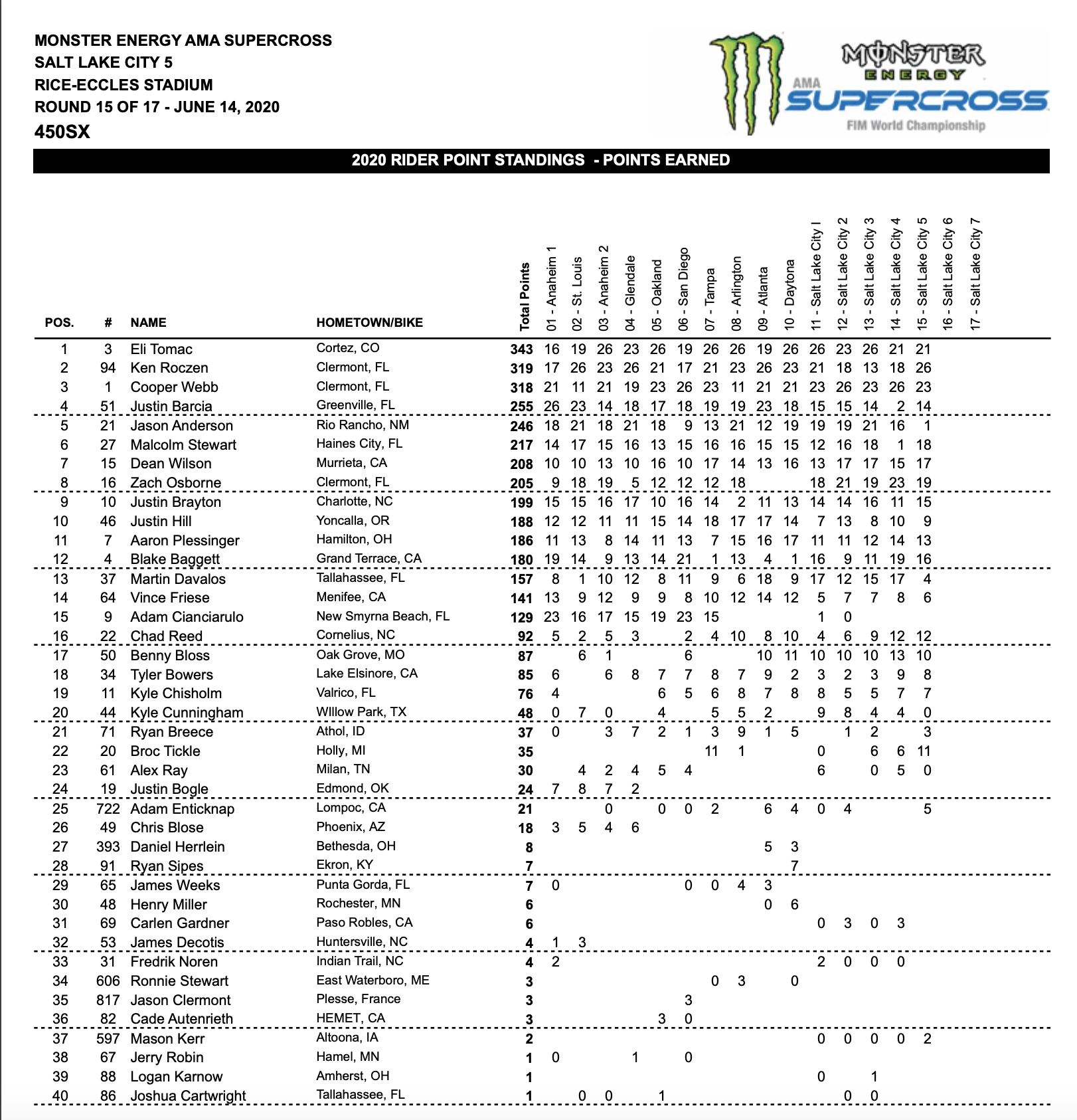