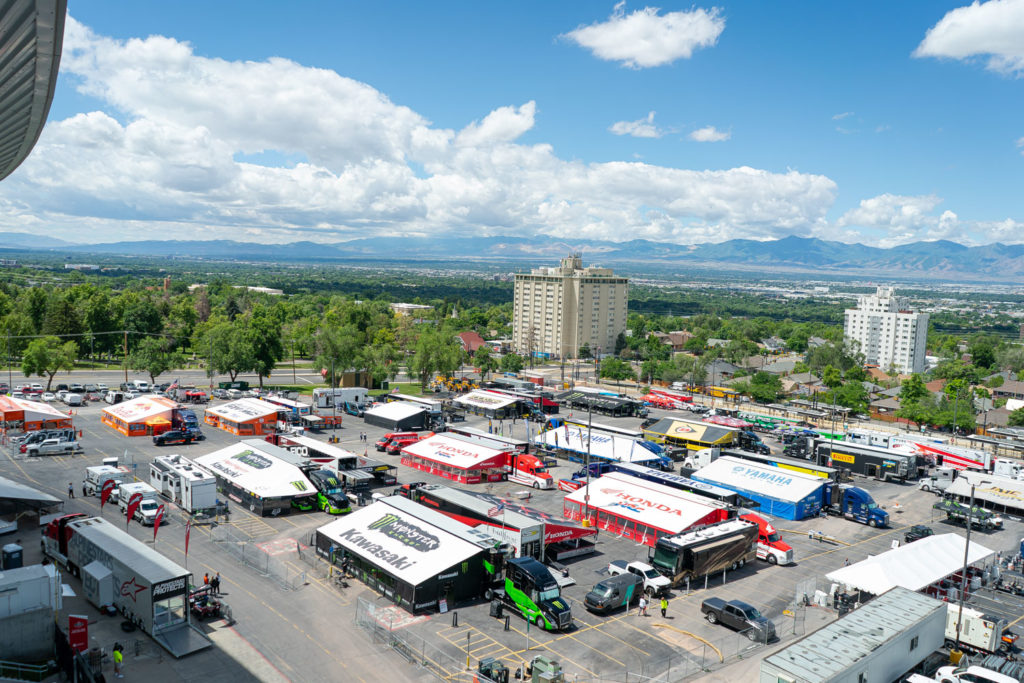 One step closer to the end of the season. Timed Qualifying is done at the 2020 Salt Lake City Six Supercross, the sixteenth round of the 2020 Monster Energy Supercross, and we’re setting our sights on the night’s racing. Overnight rains hammered SLC but prep by Dirt Wurx, plus the quick to dry dirt here in Utah, had the track in “prime” condition during the final sessions of practice.

Like we said in Race Preview, there is a chance that Eli Tomac could clinch his first-career 450 SX title and the point margin between Chase Sexton and Shane McElrath is just three as they enter their final normal round of the season before the East-West Showdown. 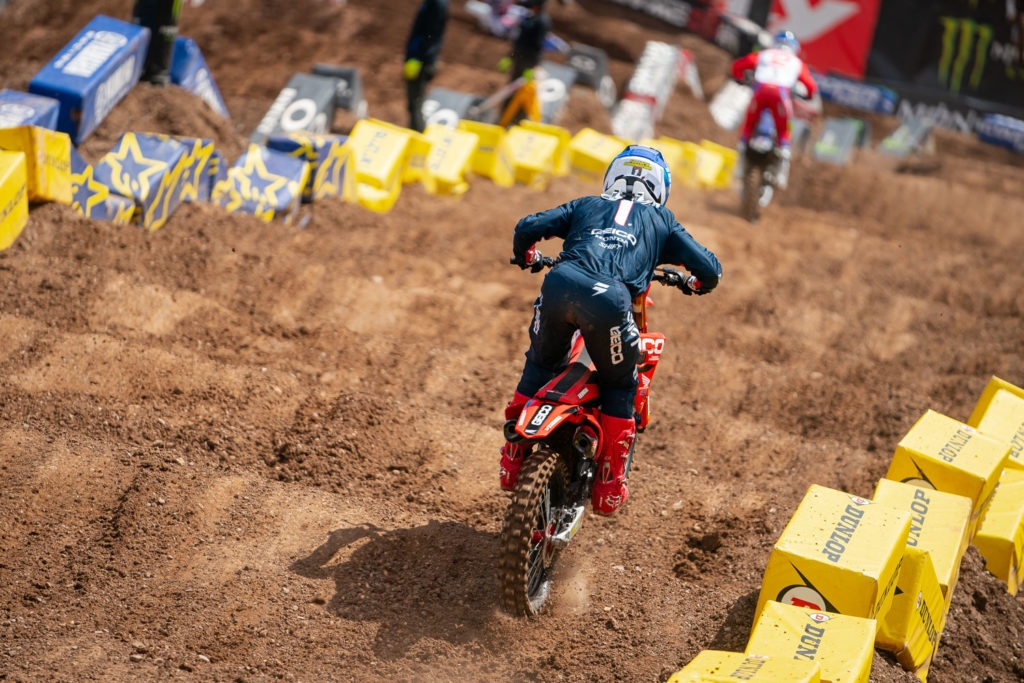 Chase Sexton really wants to show that he’s the top guy in the East Coast Region. With the red plates on his GEICO Honda, Sexton set the pace in both of the sessions with his best being a 43.673. It’s worth noting that Sexton was the only rider in the 250 Class to put in a lap under the 44-second range.

Monster Energy/Star Racing/Yamaha’s Shane McElrath held the second spot in the timesheets with a 44.287.

Colt Nichols claimed third on the clock with the 44.765 time in the Final Session aboard his Monster Energy/Star Racing/Yamaha.

Rookies Jo Shimoda and Pierce Brown finished out the top-five, with GEICO Honda rider Shimoda’s best lap being a 44.930 and Troy Lee Designs/Red Bull/KTM rider Brown’s best being a 45.412. Shimoda did take a hard hit during the closing moments of the qualifier but will line up for the night’s race.

With Garrett Marchbanks on the sidelines for the rest of Supercross, there will be no Monster Energy/Pro Circuit/Kawasaki bike on the track tonight. Actually, injuries or issues have taken a toll on the 250 Class and only 30 riders on the line for tonight’s race. 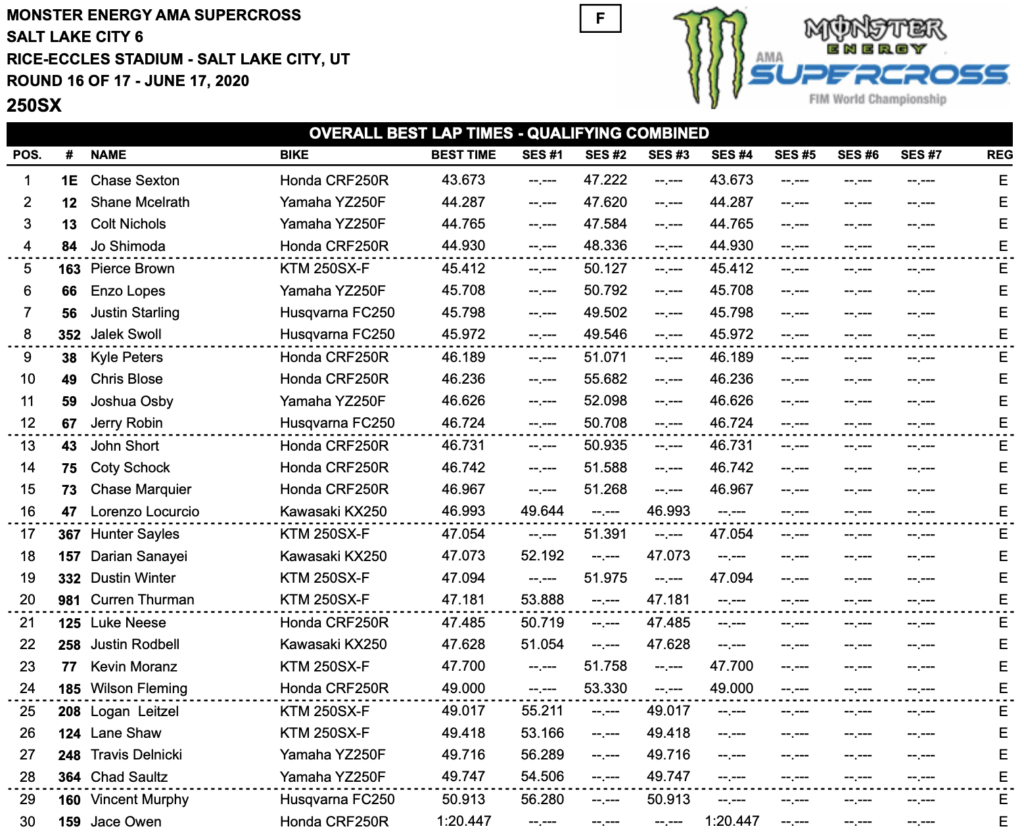 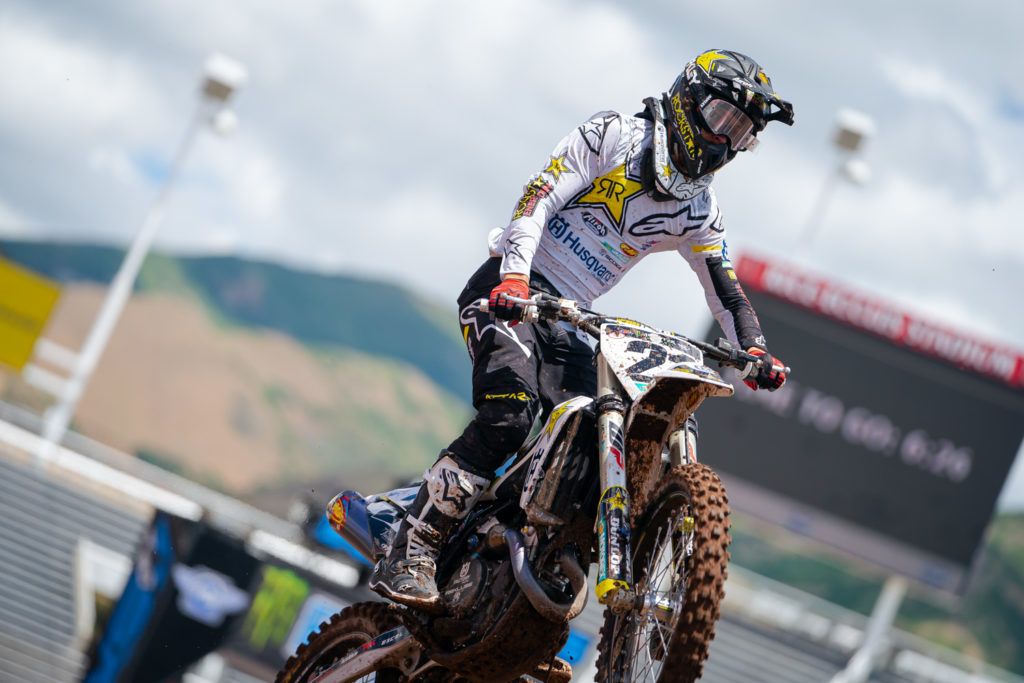 Bounce back. Jason Anderson had a rough Main Event on Sunday afternoon but the Rockstar Energy Husqvarna Factory Racing rider shook it off by posting the fastest lap of Wednesday’s Timed Qualifying sessions. His very best time was a 43.246 on Lap 10 and he backed it up with a 43.277 on Lap 12.

Eli Tomac isn’t cruising to the championship. The Monster Energy Kawasaki rider was second overall on the stopwatch with a 43.539 lap in the second session of the afternoon.

Team Honda HRC’s Ken Roczen wasn’t far off of Tomac’s time; 0.014 seconds, to be exact. This put him third overall on the sheets.

Dean Wilson’s run of quick qualifying laps continued with a 43.797 that put the Rockstar Energy Husqvarna Factory Racing rider fourth in the field.

Cooper Webb completed the top-five rank with a 43.804 in the last session aboard his Red Bull KTM.

The top seven riders in the 450 Class (Anderson, Tomac, Roczen, Webb, Aaron Plessinger and Benny Bloss) were all in the 43-second range. 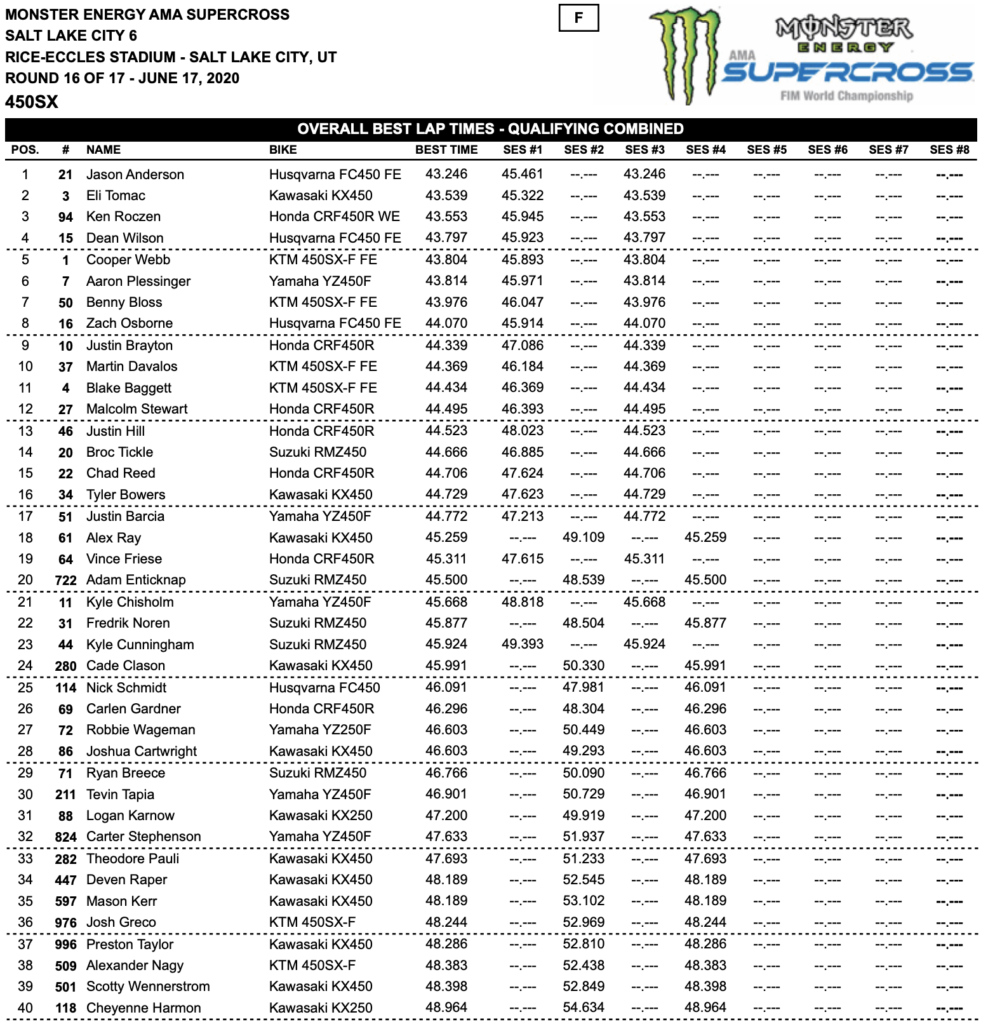