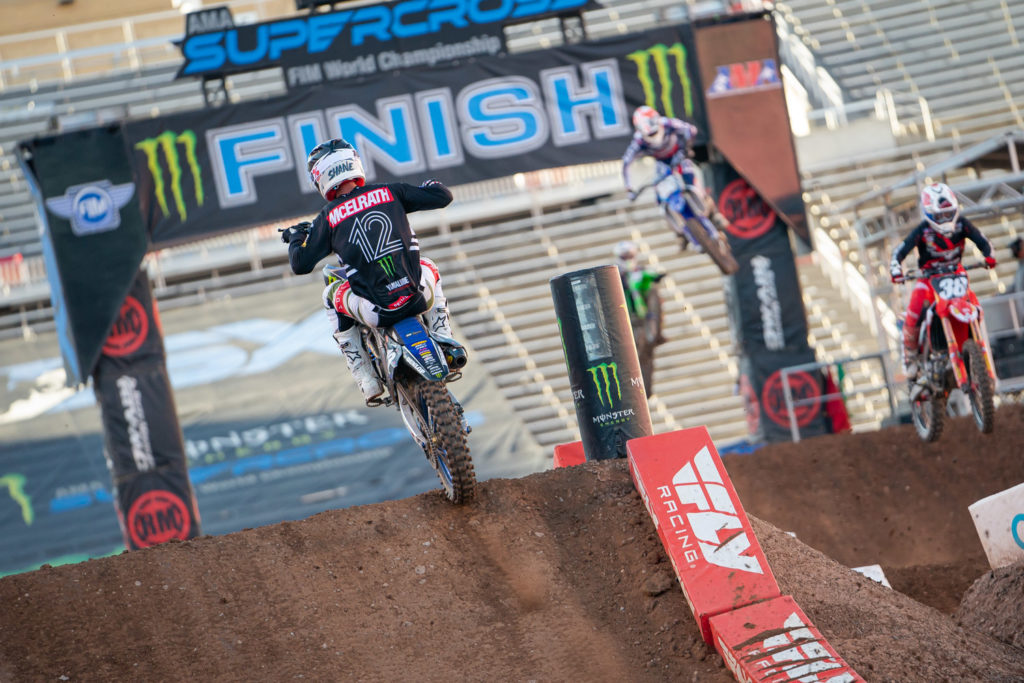 As the first gate of the evening dropped, Shane McElrath was off to another holeshot in SLC. Jo Shimoda entered turn two behind the Star Racing rider and Jalek Swoll behind him. After just a lap, the top two already gapped the rest of the field. Jo made a couple of early jabs at a pass for the lead, but Shane followed those attempts up with a few quick laps and began gapping second place. Behind the leaders, Sanayei and Locurcio battled inside the top-5 for fourth place, but Locurcio was ultimately able to secure the position. As the first heat race of the day winded to an end, McElrath continued to lead with Jo Shimoda 8-seconds back. With two laps to go, Rodbell passed into a transfer position after a rough crash off of the start. As the checkered flag waved, Shane McElrath took the heat race win.

Colt Nichols controlled the pace early on while Chase Sexton took a little while to work into contention for the lead. A mistake by Nichols with two laps remaining allowed Sexton to close to within striking distance,  The defending 250 Eastern Regional Supercross Champion capitalized on Nichols’ bobble and made a clean block pass to take over the lead and then set sail out front. At the checkers, Sexton enjoyed a comfortable lead over Nichols, Pierce Brown, Kyle Peters, John Short, and Justin Starling followed suit.

“I wanted the holeshot but it wasn’t bad passing towards the front because I found some new lines,” said Sexton. “Hopefully, I will get the holeshot in the main event and have a clear track ahead of me.”

Luke Neese took control of the 250 LCQ aboard his Honda. Club MX rider Enzo Lopes overcame a spill early in the race and overtook Neese on the next-to-last lap to earn the win. Josh Osby came home third, while SGD Racing/Maxxis Tires/Babbitt’s Kawasaki rider Justin Rodbell earned the last transfer spot and ticket to his first main event since Daytona.

Darian Sanayei surprised everyone by grabbing a commanding holeshot at the start of the main. His time in the spotlight lasted only two straightaways though, as McElrath and Sexton raced past and into the top two spots in the whoops. Sexton stalked McElrath’s every move for three laps, then made an aggressive block pass to take the lead four minutes into the main. Once into the point position, Sexton immediately began to put some distance between himself and McElrath.

Hometown favorite Pierce Brown held down third early in the main and was pursued early on by Nichols, who gated around seventh and made up some ground in the field quickly. Nichols found his way past the rookie in the whoops to take over the third podium position.

At the checkered flag, Sexton lapped the field up to sixth and enjoyed a solid lead over McElrath, gaining an additional three championship points over his championship rival. Nichols followed in third, while Sandy, Utah’s Brown came home fourth, ahead of fellow rookie Jo Shimoda of the GEICO Honda team.

Going into Sunday’s East/West Showdown, Sexton leads McElrath by six points. Anything can happen, however, with the entire West coast division thrown in,

“I didn’t want to follow Shane for too long so I made the pass early on,” said Sexton. “Overall I felt really good out there. The lappers were the toughest part f the race.”

“Man it’s go time,” said McElrath. “That was a good race. I felt like I rode well but Chase just had more speed today. I am disappointed but I felt like I rode hard and I tried. It was a fair pass and it is do or die in the showdown.”

“I wanted to be a little better out there,” said Nichols. “I know we had a break but it was hard to come back with the same intensity as the guys who have been racing.” 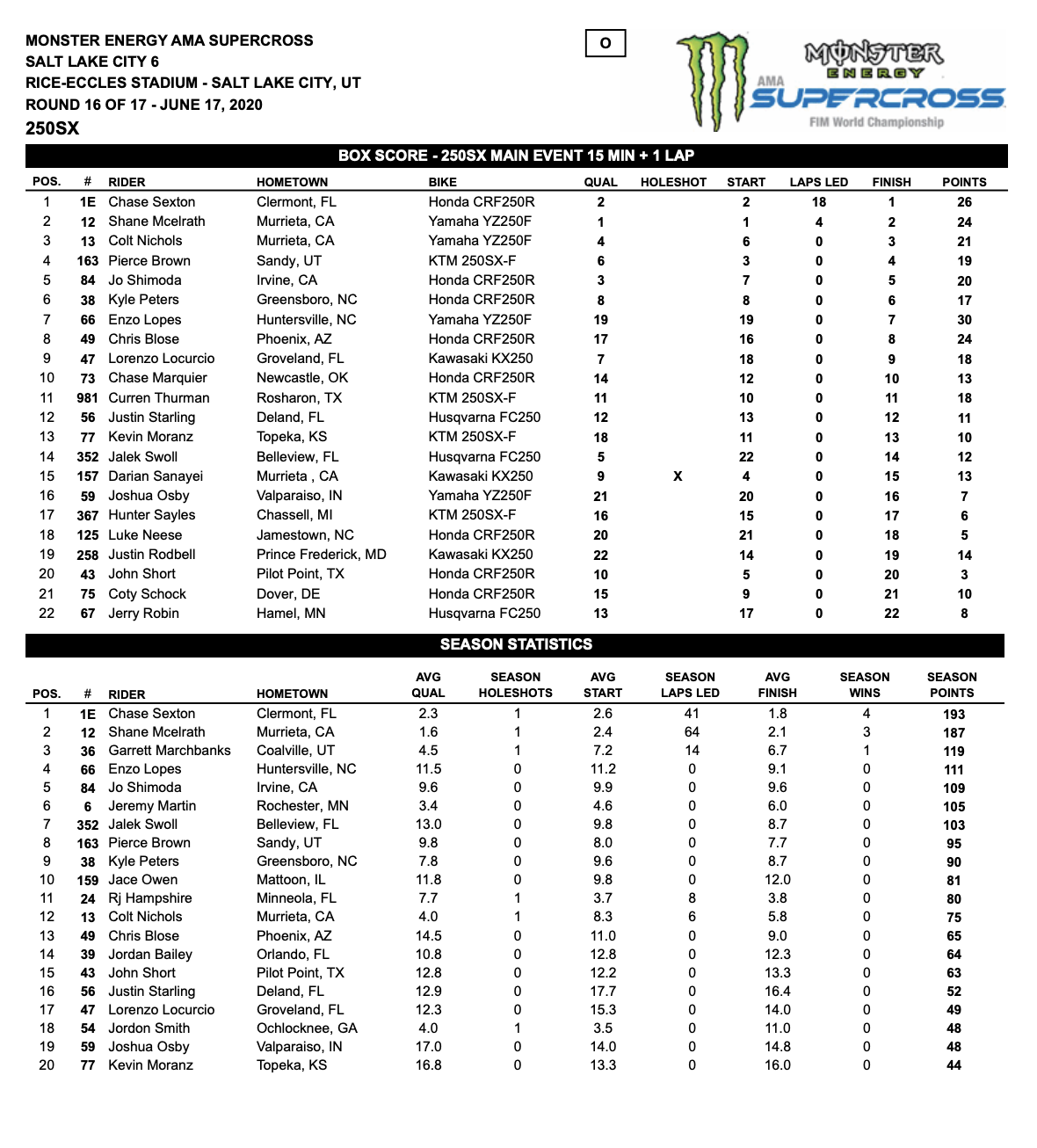 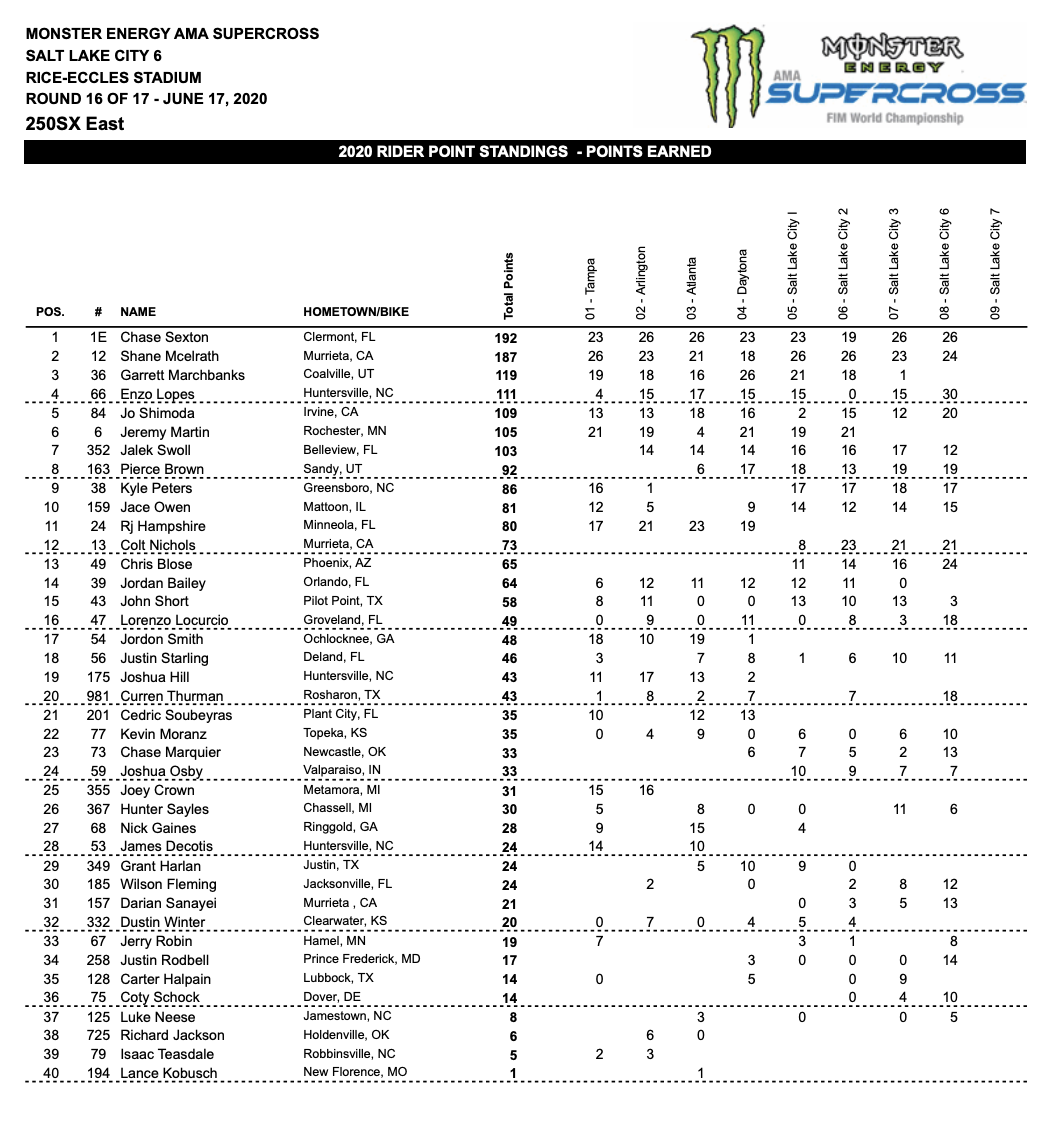 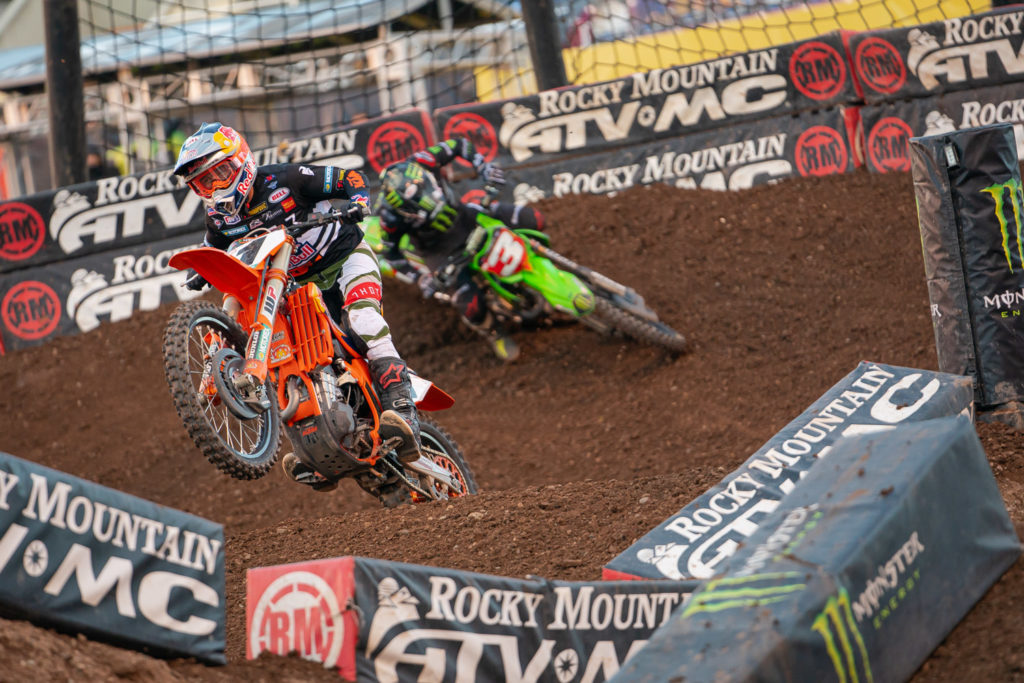 Martin Davalos rocketed off the line in the first heat and led the way on his Tedder KTM. Zach Osborne, Aaron Plessinger, and Dean Wilson gave chase. Eli Tomac was mired with a miserable start but he worked up to the lead group by lap two. WIlson made a great move to take over third, and he carried that momentum past Osborne one lap later to take over second. Davalos cased a rhythm section and allowed Wilson and Osborne to flow past, and Tomac was next to gobble up the newly crowned 450 Rookie of the Year. Tomac applied massive pressure on Wilson for the lead, but the Scotsman held fast and earned a narrow win over the Kawasaki rider.

“I’m happy,” said Wilson. “I was so close to winning that heat at the last race, and it feels great to get it done tonight. Especially with Eli pressuring me.”

Ken Roczen grabbed the holeshot at the start of the second heat race, but fast qualifier Jason Anderson pushed the German wide in the second corner and took over the lead. Roczen got stuck in a mud bog on the side of the track and had to wait for the entire pack to pass before he could rejoin the race. Roczen went to work immediately and worked into a qualifying position within a lap and a half. At the front of the pack, Anderson established a soli lead over Cooper Webb and controlled the race with relative ease aboard his Rockstar Husqvarna,  At the checkered flag, Anderson led Webb by four seconds. Blake Baggett, Justin Barcia, Justin Hill, and Benny Bloss led Roczen across the finish line after his lap-one mishap.

“I feel like I’ve played the bridesmaid all season and I am ready to get back up there and battle for the win,” said Anderson.”I have felt great all day and I am looking forward to the main.”

Kyle Chisholm snagged the holeshot at the start of the 450 LCQ and had Chad Reed, Freddie Noren and Kyle Cunningham in hot pursuit. Reed applied to pressure from the get-go and made a pass in the whoops at the halfway point. From there, it was smooth sailing for Reed as he raced on to the win and his 264th main event. Chisholm, Noren, and Cunningham rounded out the show.

Osborne grabbed the holeshot at the drop of the gate, while Tomac entered turn one in dead last place. At the completion of the first lap, however, Tomac was already up to 11th. Up front, Osborne led Brayton, Webb, Roczen and Justin Hill. Webb dove beneath Brayton to take over second on the fifth lap, and found himself with a two-second deficit to Osborne. Tomac, meanwhile, worked through the field with relative ease and into sixth place by lap eight.

At the halfway point of the race, Tomac broke into the top four by passing Anderson with a close pass in the whoops. With that, Tomac set his sights on the due of Roczen and Webb – his championship rivals – who battled over third. Tomac made the pass on Roczen on lap 17 to take over third, but the Honda rider made a couple of great pass attempts that Tomac was able to defend against. On lap 23, Webb dove beneath Osborne to steak the lead with an aggressive move. Osborne bobbled as he exited the corner just long enough for Tomac to race past as well. Once into the lead, Webb wicked up the pace and was able to stay safely ahead of Tomac for his third Wednesday win of the Salt Lake stint. In doing so, Webb also denied Tomac the championship clinch with one race to go. Behind Tomac came Osborne, Roczen, Anderson, and Brayton.

“I wasn’t really thinking about the championship out there,” said Webb. “I was just trying to hit my marks every lap. I figured out the whoops lat in the main and felt good. It’s great to get another win and it was a tight race between the four of us. It was a fun race for sure!”

“I felt better on this track today as far as being able to make passes,” said Tomac. “Once I caught up to the leaders I think Cooper stepped it up and made it hard on me.”

“The whole time I was in the lead I was just trying to set a new personal best for leading laps,” said Osborne. “It was a great improvement after that heat race where I went from the lead to sixth. These altitude races are no joke.” 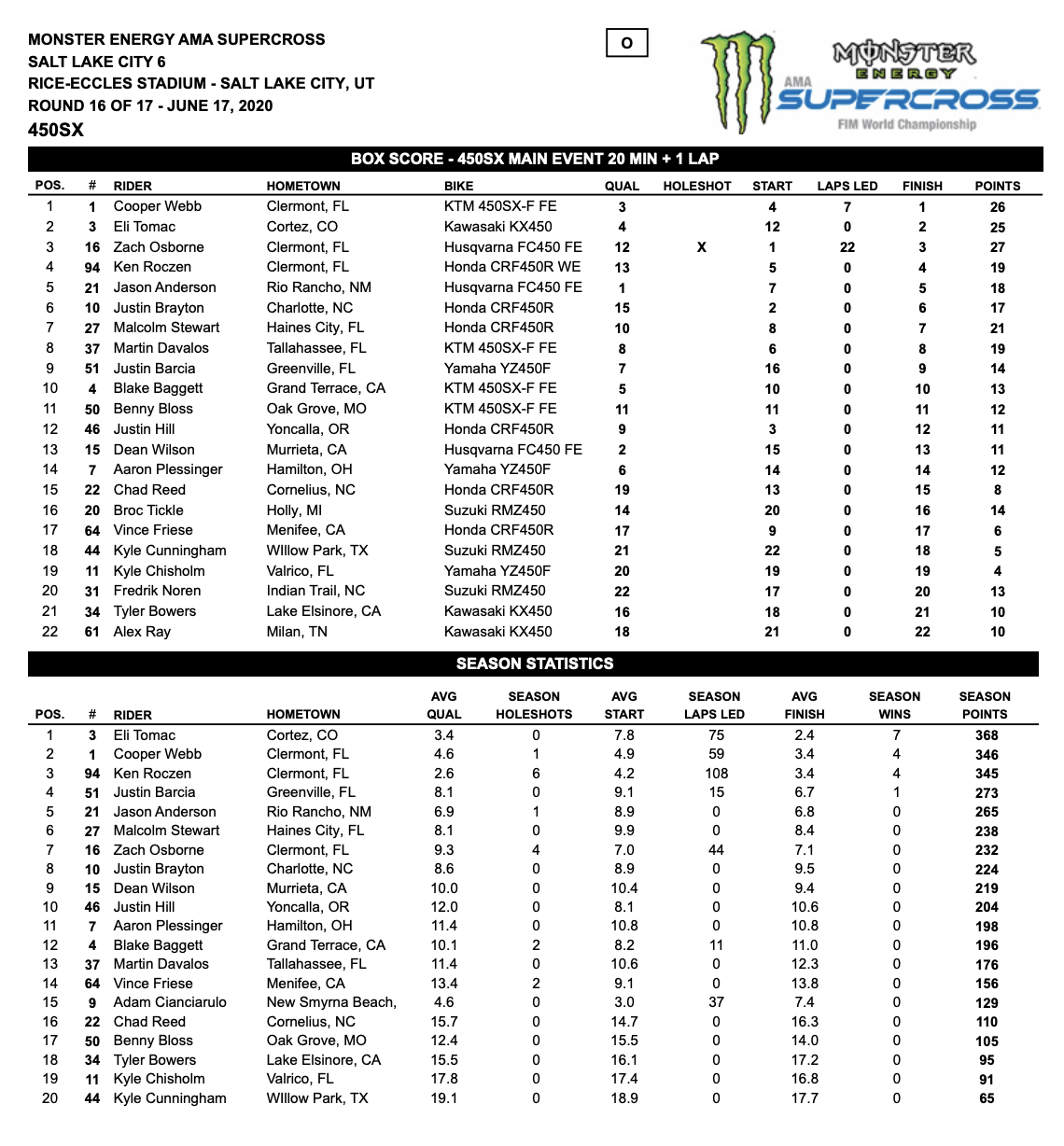 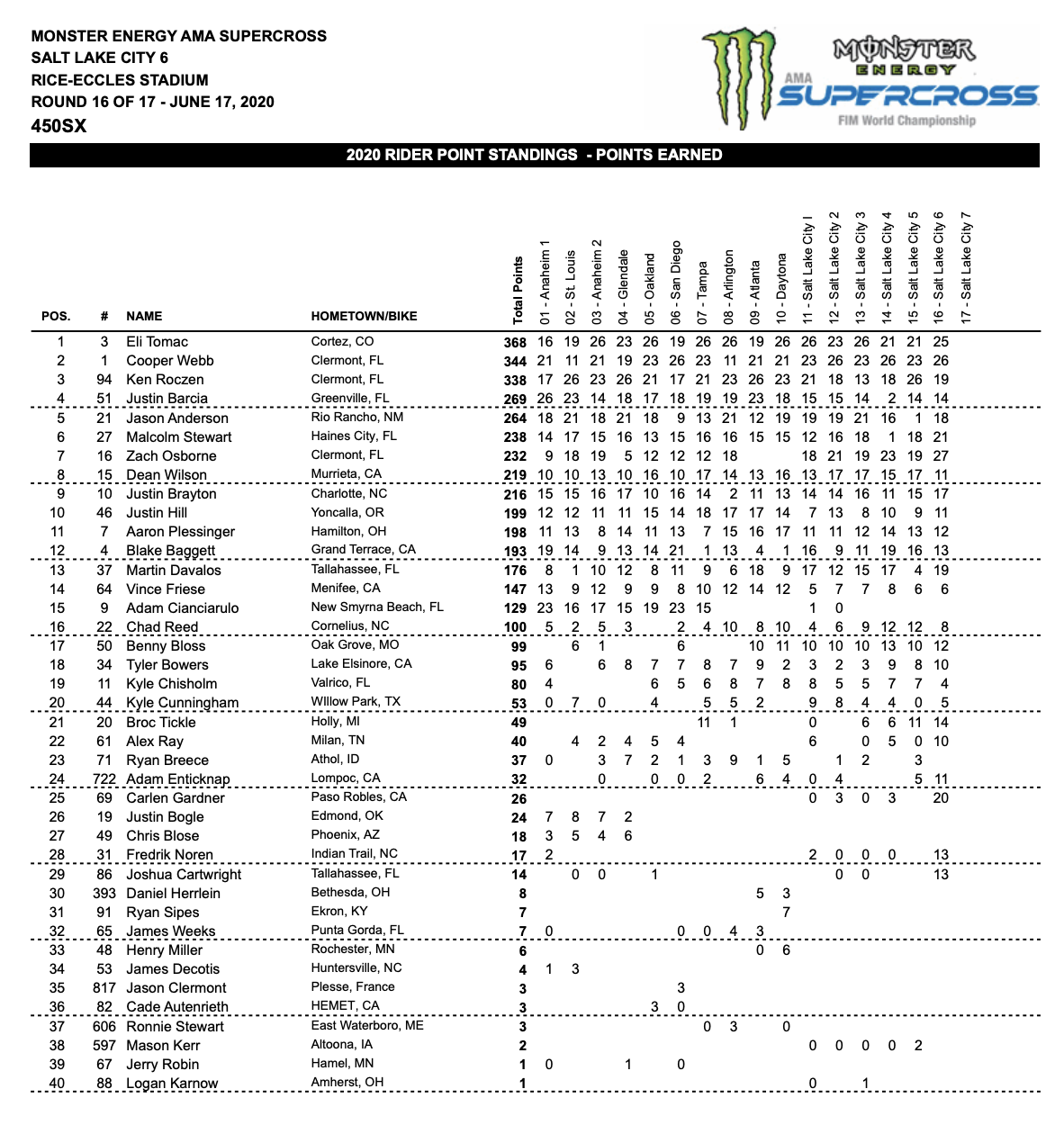 2020 Salt Lake City Six Supercross | How Was Your Wednesday