The first start of the night went to Pro Circuit Kawasaki’s Austin Forkner, but Carson Brown and Cameron McAdoo immediately got by Forkner in the second corner. A few sections later, McAdoo passed Brown and entered the lead. At the end of the first lap, Forkner moved into second and it was the Pro Circuit Kawasaki duo up front. With just over three minutes to go, Austin Forkner got a great drive through the second set of whoops and moved past his teammate and into the lead. Meanwhile, Derek Drake moved into third place as his teammate Hartranft moved into a transfer position. Towards the end of the race, Drake caught up to the rear wheel of McAdoo but wasn’t able to complete the pass. Austin Forkner and his Monster Energy Pro Circuit Kawasaki crossed the finish line first and snagged the heat race win.

The second start in San Diego went to Monster Energy Star Racing Yamaha’s Justin Cooper, but Dylan Ferrandis quickly got around his teammate and immediately began to check out. Michael Mosiman sat in third at the end of the first lap and began working on Cooper for second. Meanwhile, Luke Clout began making his way through the pack and into a transfer position. As the checkered flag flew, Dylan Ferrandis grabbed another dominating heat race win.

The 250 LCQ holeshot went to the number-284 Kawasaki of Camporese, with Martin Castelo following. The 118-machine of Harmon began pressuring Castelo for second place but was unable to complete the pass. With less than two minutes on the clock, Martin Castelo completed the pass on Camporese and moved into the lead. Meanwhile, Robby Wageman moved into fourth place, the last and final transfer position into the main event. However, on the final lap, Wageman lost the position and his night came to an end.

The 250cc main event start went to Michael Mosiman, with Austin Forkner and Dylan Ferrandis behind. At the end of the first lap, Justin Cooper was able to move into fourth place and behind his teammate. Austin Forkner set his eyes on Mosiman in the lead and began reeling him in. After trailing Michael Mosiman for a few laps, Forkner was able to complete the pass on Mosiman and grab the lead. Mosiman went to strike back but was unable to respond. That allowed Ferrandis to close up, and after Mosiman and Ferrandis traded positions for a few sections, Dylan was able to secure second place with an inside move. A few minutes later, Justin Cooper was able to repeat his teammate’s work and get around Mosiman for third place. While Cameron McAdoo was running in fifth place, his Pro Circuit Kawasaki quit on him, sending him back to the rig. Meanwhile, his teammate continued to lead upfront but was beginning to receive some pressure from Ferrandis. With four minutes to go, Dylan Ferrandis closed back in on Forkner and dove for the inside but wasn’t able to complete the pass, again. Third time is the charm, with just a few laps to go Dylan Ferrandis was finally able to complete the pass on Forkner for the lead. And Dylan Ferrandis extended his points lead with another race win on the season. 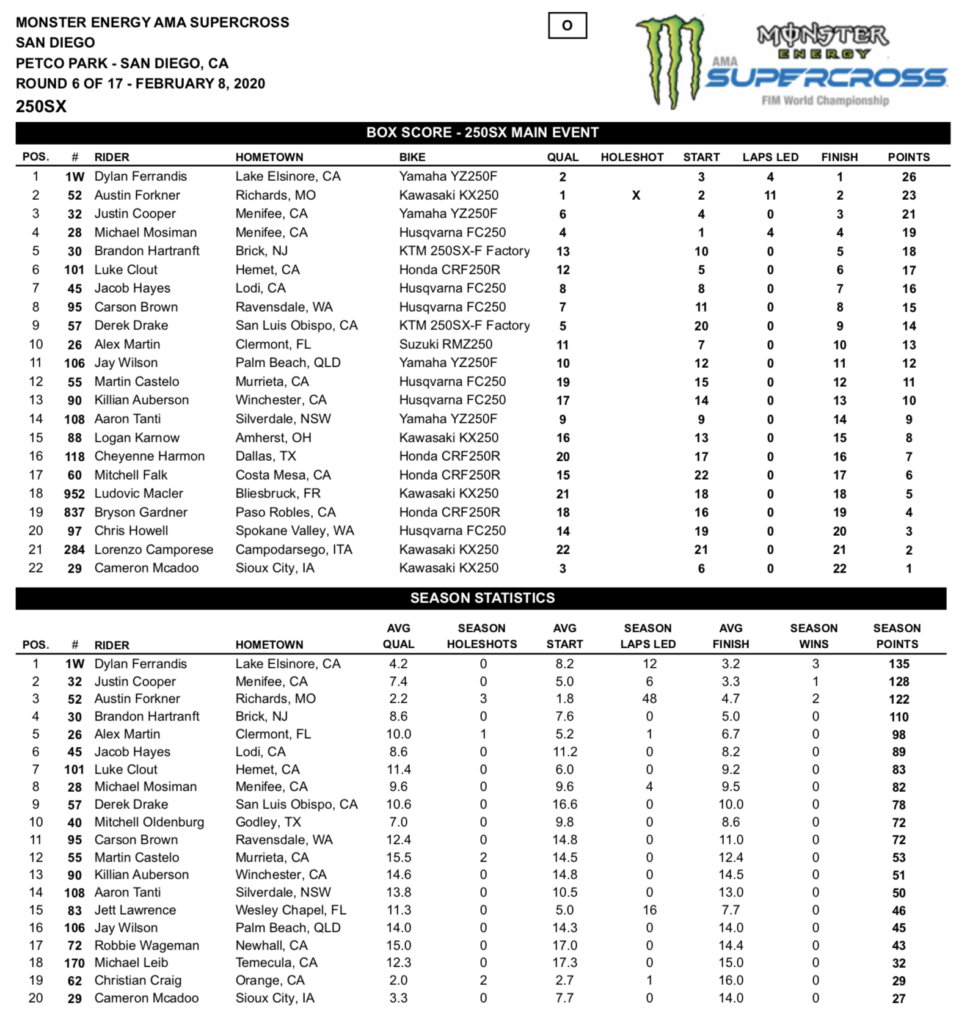 The first 450cc race of the night was off and Ken Roczen got a great start. After a rut fell apart, Cooper Webb went down in the third corner and would have to race through the pack. Meanwhile, Eli Tomac got around Chad Reed after the two swapped lines for a lap or so. Back up front, Zach Osborne tailed Roczen by five-seconds, and Justin Hill followed in third. Further back in the pack, Cooper Webb began clicking off positions and entered a transfer position. With a minute to go, Eli Tomac got around Aaron Plessinger for fifth place and then went on to pass up into a third-place finish. HRC Honda’s Ken Roczen grabbed the heat race win with a 12-second lead on second place.

Adam Cianciarulo executed a perfect start and snagged the early lead in heat race number two. Behind him, Blake Baggett and Justin Brayton battled for second place, as Jason Anderson tailed the two. Back in the pack, Tyler Bowers made the pass on Breece and advanced into a transfer position. With a few minutes to go on the clock, Benny Bloss went down while running in the top-10. Two laps to go and Jason Anderson was getting impatient, the Husqvarna rider caught up to the rear wheel of Baggett and was able to complete the pass for third after a few attempts. However, just after he made the pass, Anderson’s front wheel lost some spokes and fell out of true. Anderson was able to nurse it around the track for the final lap and finish in fifth place, while Adam Cianciarulo grabbed the win after a perfect race.

Jason Clermont grabbed the holeshot after rocketing out of the gate, but Benny Bloss quickly got around him for the lead. Chisholm began working on Clermont at the end of the first lap and was able to complete the pass for second place before the third lap started. Adam Enticknap was running in a transfer position but stalled the bike and handed the final transfer position to Alex Ray. Benny Bloss took the LCQ win and moved onto the main event.

Blake Baggett rocketed out of the start, but come the second corner, Adam Cianciarulo entered the lead. And third corner, Cooper Webb entered the lead, then the two began to battle until the end of the first lap. As they entered the third lap, Adam Cianciarulo was in the lead, Cooper Webb was in second, and Aaron Plessinger in third. Meanwhile, Ken Roczen and Eli Tomac sat way behind and had a race full of catching-up ahead of them. As Ken Roczen closed in on Justin Barcia, Bam Bam turned things up and moved past Malcolm Stewart and into fifth. However, Roczen and Tomac followed, as the two advanced past Mookie. While running comfortably in third place, Aaron Plessinger grabbed too much throttle coming out of a corner and hit the ground, moving him back down to eighth. While moving through the pack together, Tomac took the line away from Roczen and entered fifth place. With ten minutes on the clock, Tomac made the pass on Barcia, but Justin wasn’t one to give up. The two slammed each other multiple times, which caused them to lose a lot of time on the leaders. Ultimately, Tomac was able to secure fourth place and focus ahead on catching Baggett. Back up front, Cooper Webb caught up to the rear wheel of Cianciarulo and the battle for the lead was on. The two started to push each other wide, a few dives to the inside were performed, and Cooper Webb was able to make the pass on the rookie for the lead with just a few minutes left on the clock. And just like that, Red Bull KTM’s Cooper Webb is back on top with the main event win in San Diego. 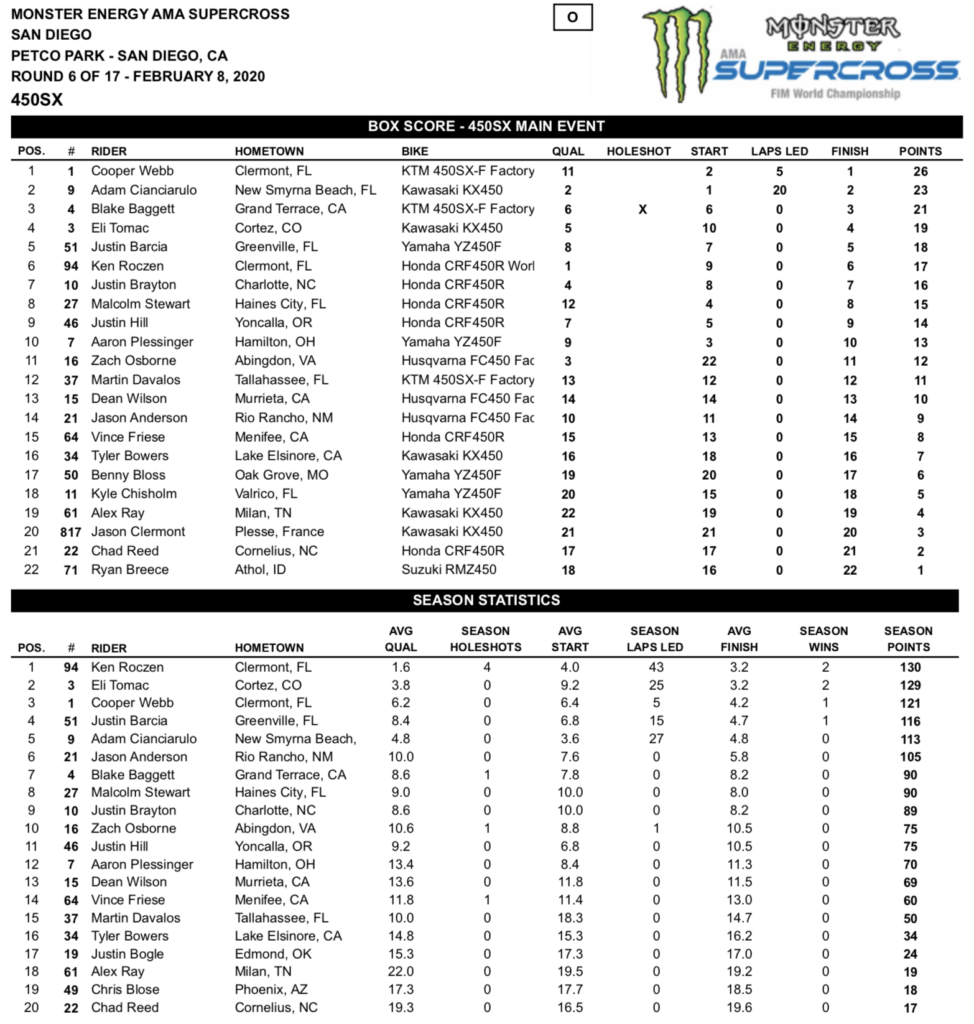