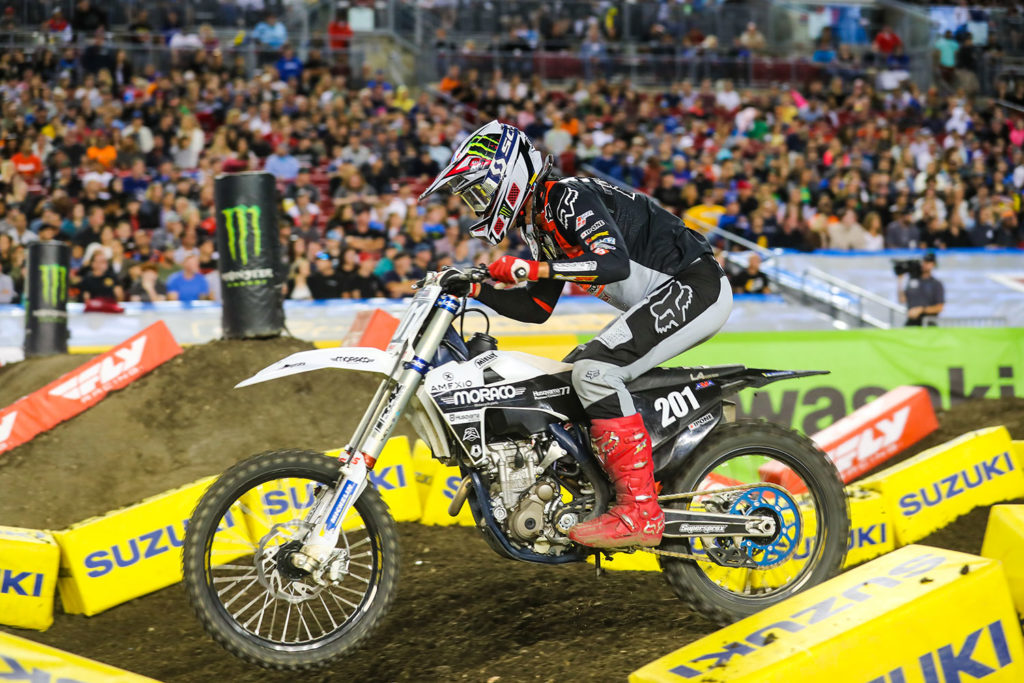 Cedric took to the track in Q1, for the first time on a 250 (this side of the pond) since 2016. After a few laps of first race-day jitters & dusting off the cobwebs, he settled in nicely behind eventual race winner (Shane McElrath); these were his fastest lap times of the session, with a 51.6. After Q1, we had come to realize that Cedric had tweaked his knee in one of the hard-packed, more rutty corners of the track. After getting bandaged up and worked on by his Physical Therapist, he set out to carry the momentum of Q1 into Q2. With the lingering effects of his knee injury, he was unable to set a faster lap time than he had in the previous Qualifying Session. As Qualifying concluded, Cedric found himself putting the 2B Moraco / Munn Racing-backed, ERM Husqvarna in 17th overall for 250 Qualifying.

As the Sun was setting, and the lights across Raymond James Stadium came on, it was showtime. Cedric took to the track in the second 250 Heat. After a strong start propelled him into the Top 10, he found himself in a long, heated battle with the likes of Factory Honda, Husqvarna & Suzuki riders. As he began to separate himself from a majority of the group, he found himself sitting comfortably in a qualifying position for the main event. Cedric found himself making a last-second charge, but to no avail; he was unable to make the pass at the line. As the Heat Race concluded, he found himself in a direct transfer to the Main Event, Qualifying in 9th Place.

When the gate dropped in the 250 Main Event, Cedric found himself just inside of the Top 20. After making quick work of some of the midfield, Cedric found himself sitting comfortably in 13th and gaining on GEICO Honda’s Jo Shimoda. As the race moved on, battles intensified. For the last 5 Laps of the race, it was an absolute dog fight between Cedric & Monster Energy’s Josh Hill. Halfway through the last lap, Hill managed to capitalize on a small bobble from Cedric. Right before the finish line, Cedric made a valiant charge, but ran out of real estate. As the dust settled on the first Main Event of the season, Cedric Soubeyras crossed the line in 13th.

Ricky Renner, Owner & Racing Director: “I’m torn. As a Racer & Manager – I want to go racing any way I can. As an Owner, I have to save the money to get them there. It’s really hard to watch a guy be held back by financial situations. I want to go all in and say hey, we can only do 3 races, but we’re gonna send it – all in. However, realistically, we need to be there every weekend.”

“We have a great team (staff), a solid foundation & an extremely talented rider (in Cedric Soubeyras). Cedric rode great, all day and night, despite battling a knee injury from practice. We’re happy with where we ended up and we’re going to do all that we can to get better every weekend. We really believe he can be a solid top 10 guy every round from here on out.”

Conor Edgar, Owner & Managing Director: “I am incredibly proud of Cedric. He recovered really well after tweaking his knee. He never complained, kept his head down & charged all day long. I could not ask for a better athlete to be carrying the banner for us in our inaugural year.”