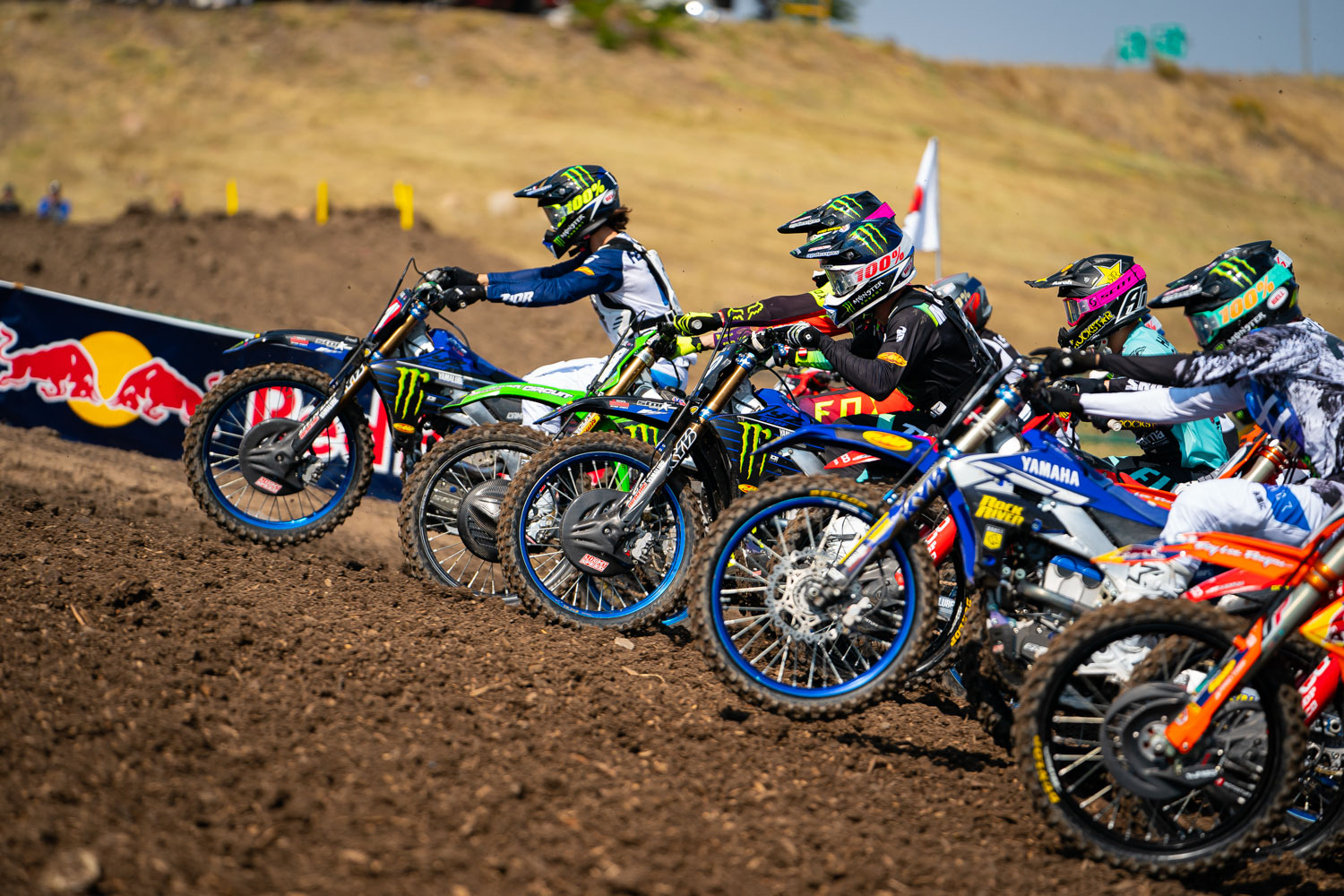 Lakewood, Colorado, played host to the penultimate round of the Lucas Oil National Championship Motocross Series this weekend, and the Thunder Valley MX track proved to be even more challenging this year with a hard-packed surface and the typical massive ruts that form on the mountainside course. In the 250 class, Monster Energy/Star Racing/Yamaha’s Justin Cooper carried his momentum from last weekend’s runner-up finish at WW Ranch in Florida and earned is first 250 National win of the year with 2-1 moto scores. His teammate and championship point leader, Dylan Ferrandis, came home second overall and added to his lead over GEICO Honda’s Jeremy Martin, who was third.

In the 450 division, Eli Tomac rose to the occasion in front of his home-state fans and earned the win with 3-1 finishes on his Monster Energy Kawasaki KX450. His teammate Adam Cianciarulo lost the tiebreaker with his 1-3 showing for second overall, while points leader Zach Osborne finished third and enters the series finale with a 24-point lead.

Monster Energy/Pro Circuit/Kawasaki’s Mitchell Harrison edged out points leader Dylan Ferrandis and his Star Racing Yamaha teammate Shane McElrath for the first holeshot of the day, McElrath drew first blood and raced past both riders ahead of him and into the lead. At the end of lap one, the running order was McElrath, Ferrandis, Harrison, Justin Cooper, and RJ Hampshire. Ferrandis went to work quickly and challenged his teammate for the lead, while Cooper did the same to Harrison a couple of seconds further back.

Ferrandis found his way past McElrath and into the lead at the 10-minute mark, using his exceptional downhill speed to overtake the number-12 machine. At the halfway point, Ferrandis enjoyed a five-second lead over McElrath, Cooper and Jeremy Martin, who inherited fourth when Hampshire went down a few minutes earlier Cooper took control of second when McElrath didn’t do the massive uphill triple. Cooper sent the gap easily on his YZ250F and dove beneath his teammate in the next corner, utilizing the momentum gain he enjoyed from landing the triple.

And with that, the top four positions were solidified as Ferrandis went on to win the moto with a comfortable margin between he and second-placed Cooper. McElrath came home third with a gap over Martin, while GEICO Honda’s Hunter Lawrence turned in a fabulous ride for fifth, ahead of his younger brother Jett and their Japanese teammate, Jo Shimoda. 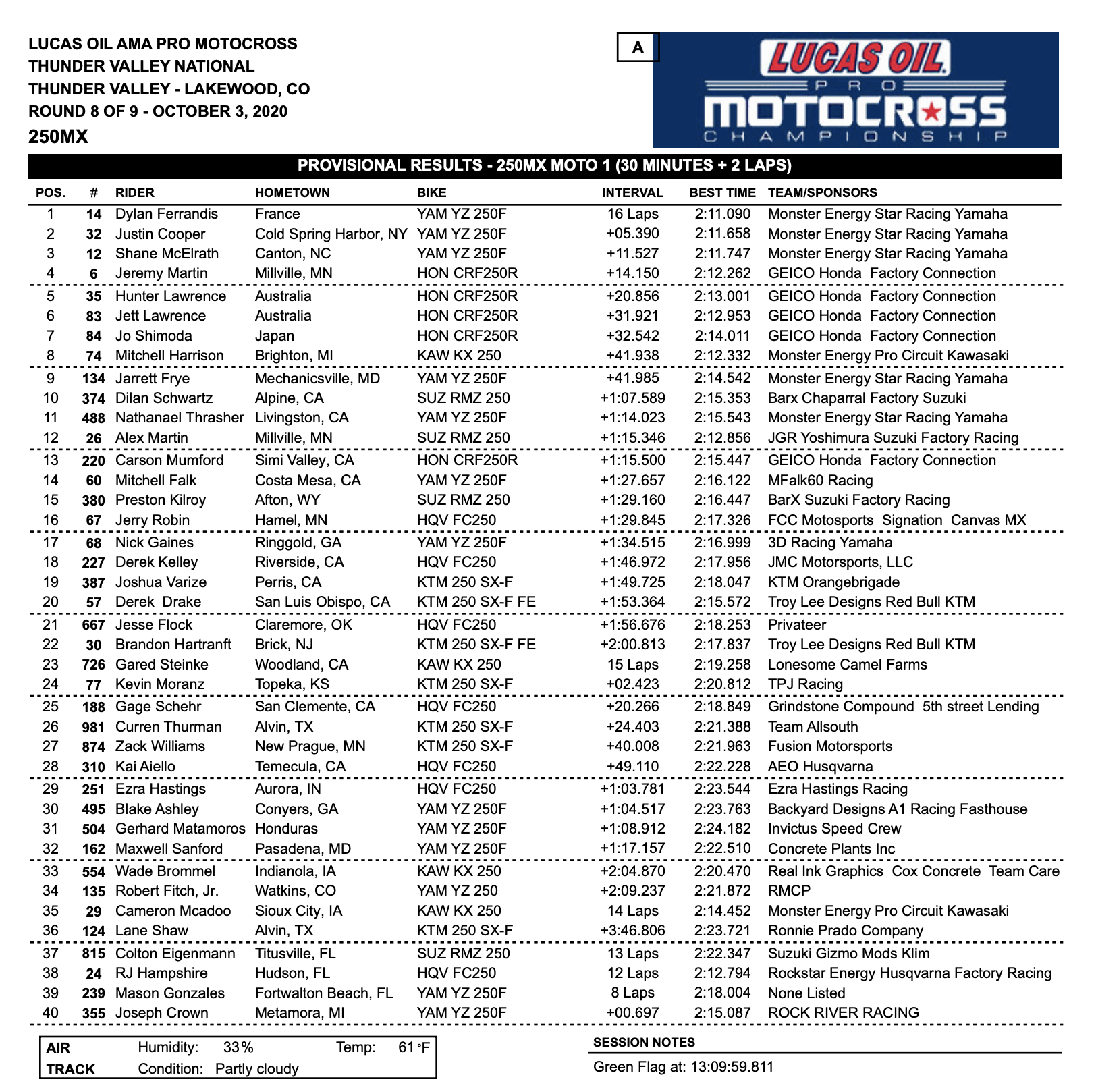 Cooper led the field through turn one at the start of moto two and turned in some speedy sprint laps that allowed him to establish an early gap over the rest of the field. Cooper’s teamate McElrath was in hot pursuit in second, but Martin found his way past early on and set his sights on the leader. Ferrandis, meanwhile, suffered a poor start and found himself barely inside the top 10 in the opening laps. While Cooper and Martin had a clear track up front, the series points leader got caught up with riders that he normally does not have to contend with.

Hunter Lawrence and Brandon Hartranft exchanged a couple of aggressive moves near the halfway point, and their skirmish actually cost Ferrandis some momentum as he crashed off the track when Hartranft ran Lawrence wide and left the Frenchman nowhere to go. Ferrandis remounted quickly, though, and began his second charge through the pack. Ferrandis powered past Martin with a massive burst of acceleration out of an uphill corner that allowed him to send the big uphill triple jump. Ferrandis regained his composure quickly and broke into the top five with a great pass on Hartranft.

At the halfway point, Martin caught fire and closed to the rear wheel of Cooper, and the two-time 250 National Champion attacked the leader repeatedly, showing a wheel on multiple areas of the track. Cooper responded by quickening his already torrid pace, and the lead duo both dropped their lap times and began to pull even further away from third-placed McElrath.

At the checkers, it was Martin, Cooper, McElrath, Ferrandis and Lawrence. Cooper was elated to earn his first 250 National win of the season, having struggled to find his speed and fitness early in the series as was recovering from a freshly healed broken hand that he suffered in pre-season testing. Martin, McElrath, Ferrandis, and the Lawrence brothers followed. Ferrandis’ 1-4 scores edged Martin’s 4-2 for second overall, and in spite of his sloppy second moto, Ferrandis added another five points to his championship points lead over Martin.

“A lot of pressure was on my shoulders all season long, but I am glad that it is off now,” said Cooper. “It was good to finally do it; now I’ll try to do it again next weekend at the season finale.”

“I was in a bad position at the start of moto two,” said Ferrandis. “I had a small crash early on but I just put my head down and did the best I could. I will go into Fox Raceway with 20 points over Martin, which is a lot better than zero!” 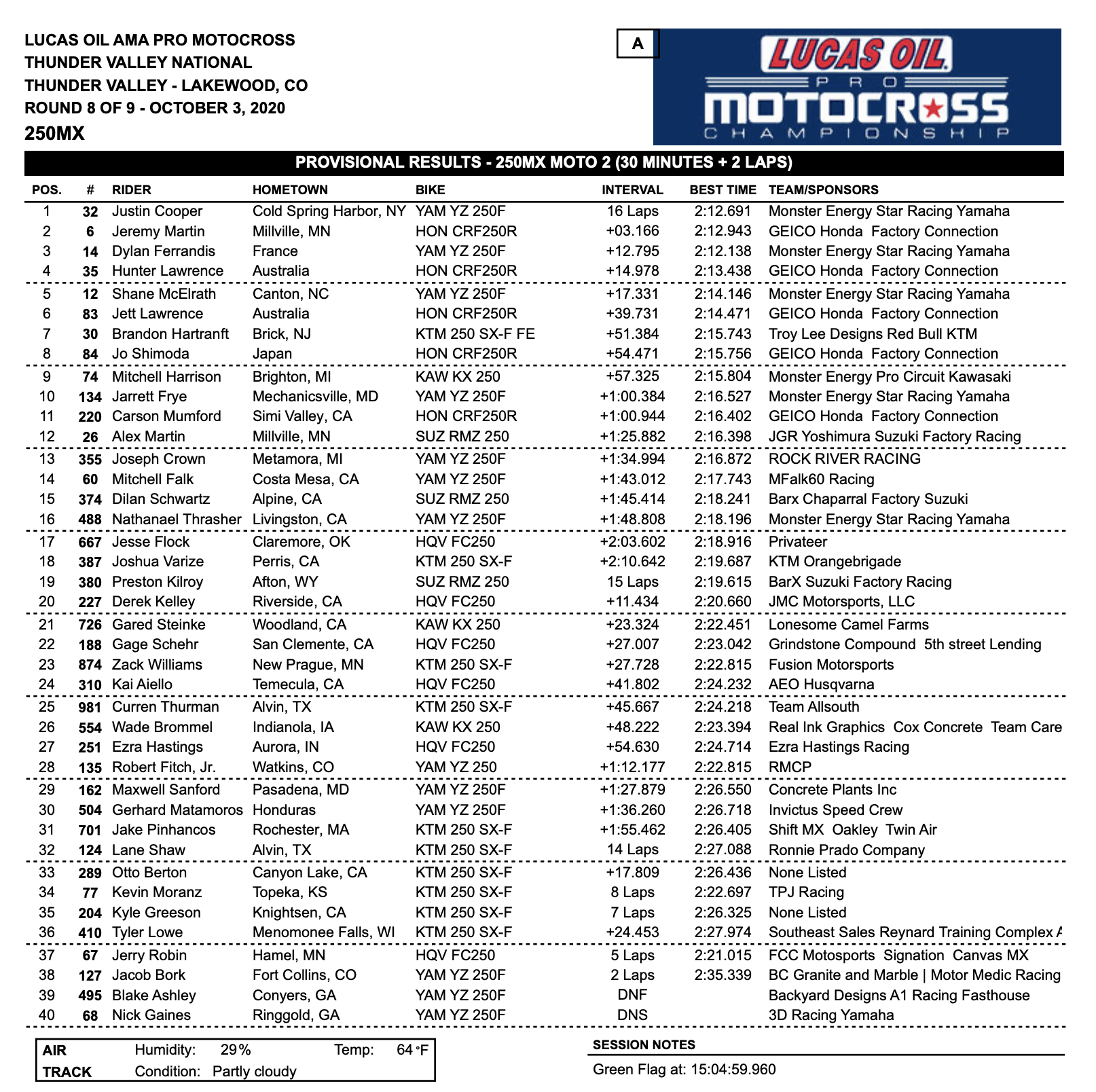 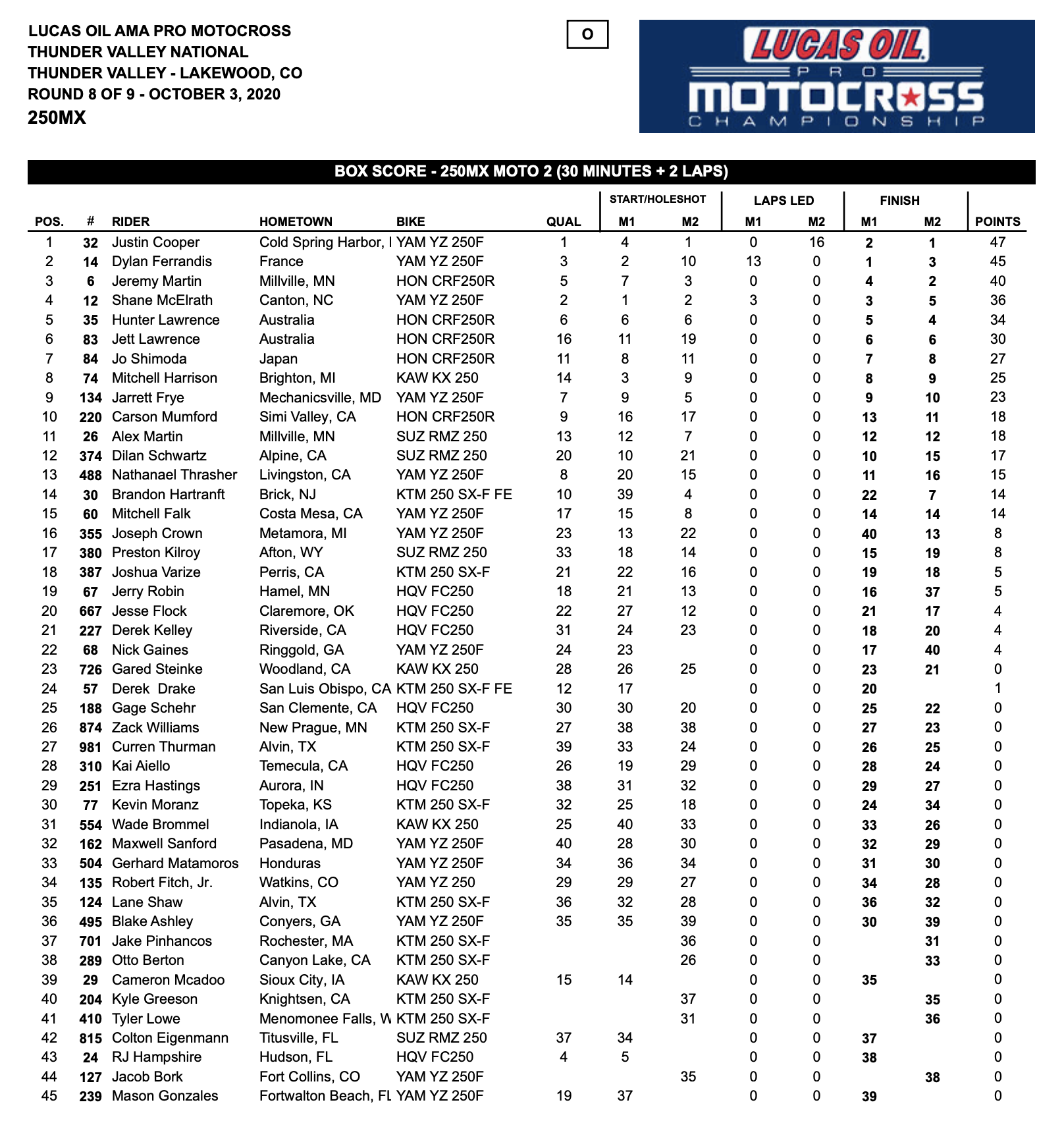 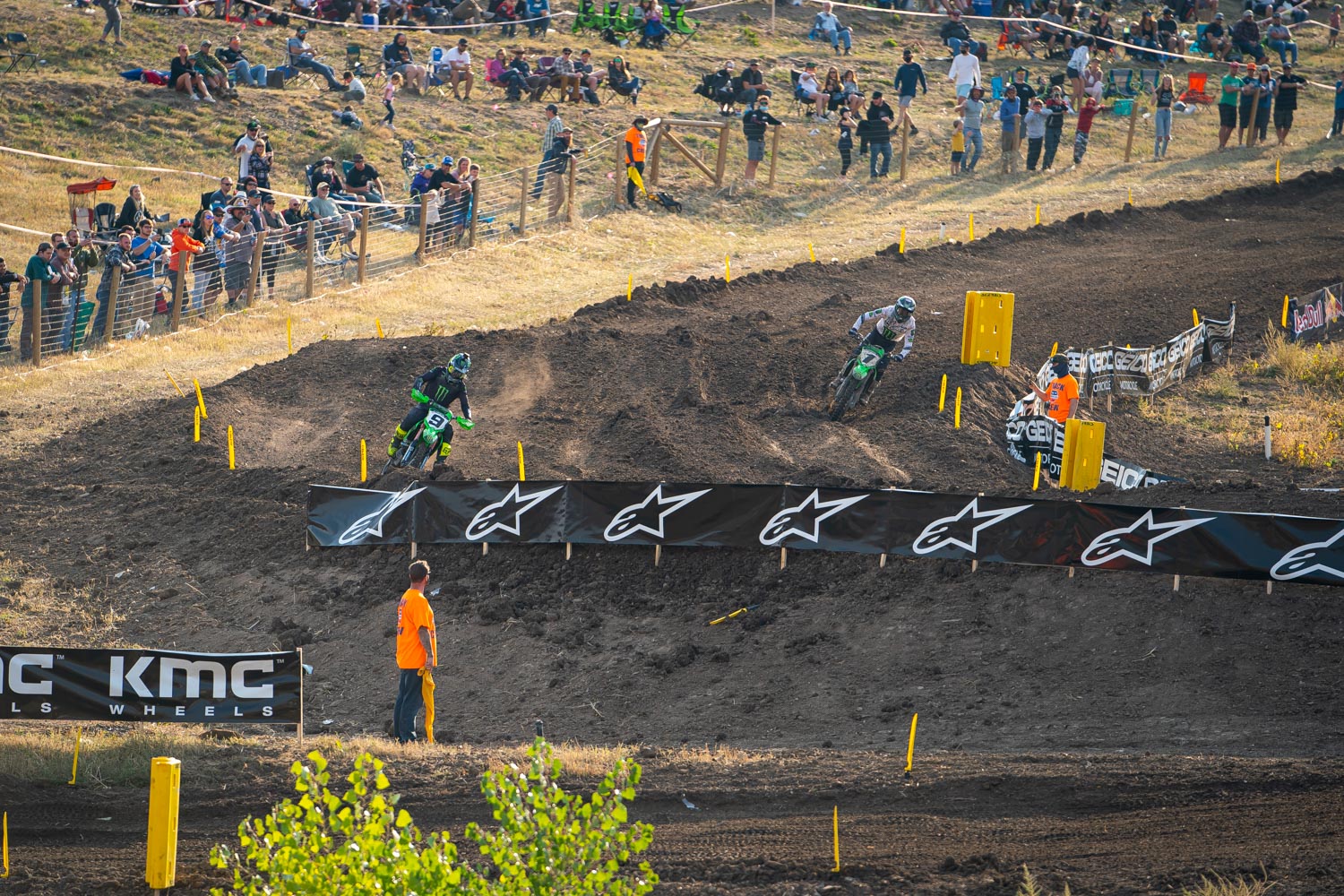 Adam Cianciarulo grabbed his seventh holeshot in a row and led the field onto the Thunder Valley track aboard his Justin Shantie-tuned Monster Energy Kawasaki, Honda HRC’s Chase Sexton followed closely behind, and would actually close in on his Florida neighbor here and there throughout the 30-minute-plus-two-lap moto. Championship points leader Zach Osborne started the race in third, and was joined early on in the top five by Justin Barcia and Eli Tomac, who suffered a mediocre start but made quick moves in the early laps.

Barcia and Tomac engaged in a fierce battle for fourth for a few corners, and Tomac took control of the position with a mind-blowing run through the far outside line of a rutted right-hander. With that, the number-one plate rider set his sights on the man poised to steal that title, Osborne.

Up at the front, Cianciarulo rode a masterful race and in spite of a couple of spectacular near-crashes that allowed Sexton to close in momentarily, he notched the moto win in convincing fashion. Sexton came home second aboard his Honda HRC machine, well ahead of Tomac, who found his way past Osborne in the closing stages of the race. 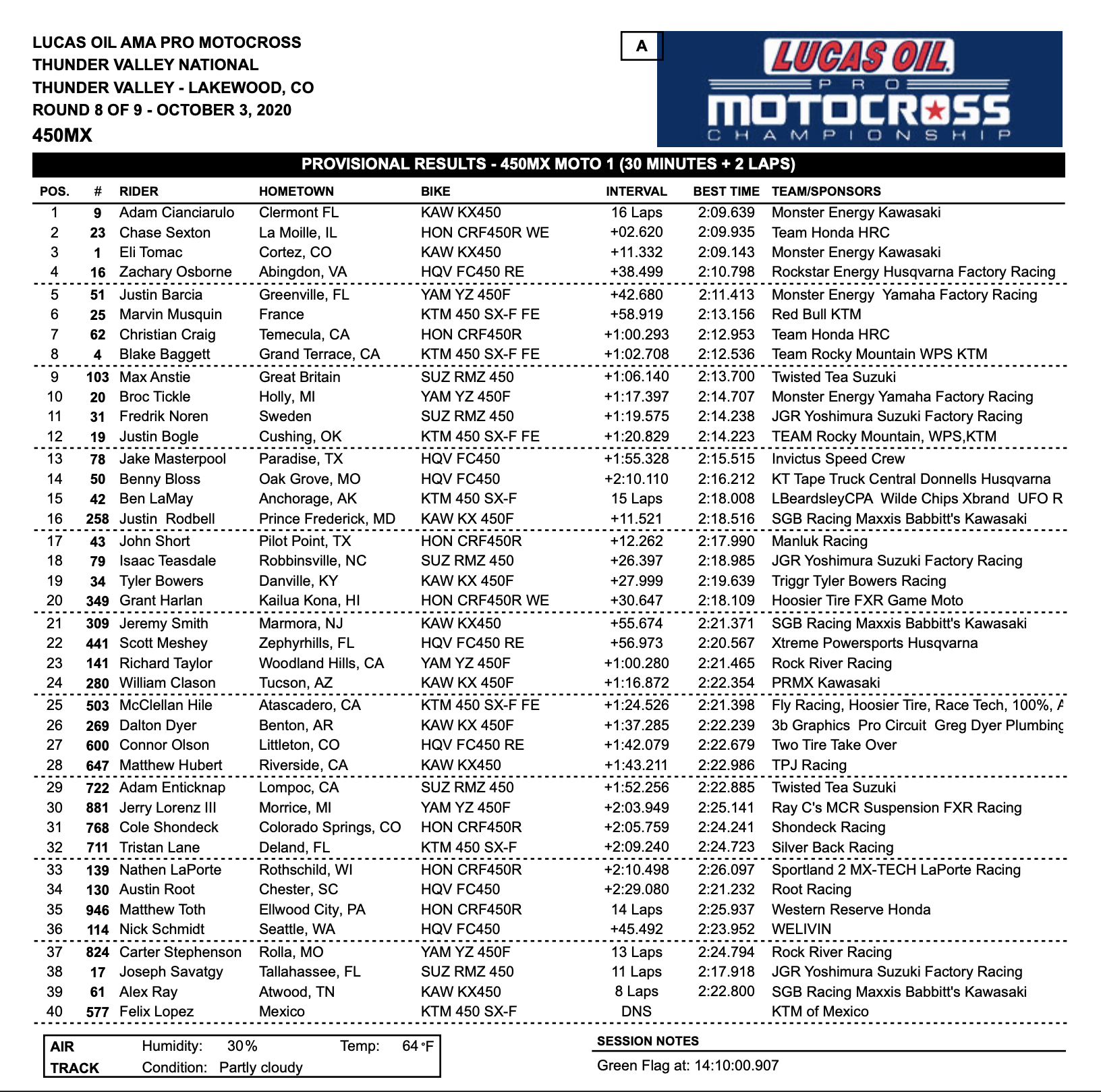 Carnage broke out at the start of moto two and multiple riders went down on the start straightaway. Marvin Musquin and Cianciarulo managed to miss the melee, and the Frenchman led the way through turn one. Cianciarulo wasted no time and took control of the lead in the third turn, and Osborne followed right past the KTM rider. HEP Suzuki’s Max Anstie was next to strike on the holeshot winner and found his way into third on the first lap. Tomac was next to zap Musquin, and the defending champ carried his momentum right past Antstie a few corners later.

As Cianciarulo settled into the lead and did his best to pull away from Osborne, Tomac started to look like his typical self and set out after the lead duo. Just before the halfway point, Tomac closed in on and passed Osborne with an authoritative pass, then set his sights on his young Monster Energy Kawasaki teammate. As Tomac hounded AC for the lead, many wondered if the defending champ – who was nearly mathematically eliminated from the championship – would pass Cianciarulo, who still had a shot at the title. That question was answered in short order when Tomac charged down a brutally rough downhill and stole the lead from Cianciarulo. With the hometown crowd behind him, Tomac immediately began to pull away from Cianciarulo aboard his Brian Kinney-tuned KX450.

Around the 25-minute mark, Tomac lost five seconds in one lap when he started to fiddle with his clutch perch, but he resumed his normal pace soon thereafter with Cianciarulo close behind. At the same time, Osborne caught fire and closed to the rear tire of Cianciarulo and began to pressure the Kawasaki rider intensely. The pressure eventually broke Cianciarulo, as he clipped a kicker inside a rutted jump face and nearly crashed spectacularly. The opening was all that Osborne needed to move into second. This exchange cost Cianciarulo more than a few precious points, but it also handed Tomac the overall win with his 3-1 tally. Cianciarulo made a last-ditch effort to overtake Osborne with a banzai down one of Thunder Valley’s big downhills, but he clipped Osborne’s rear wheel and flew off the track and out of contention for second in the moto. At the checkered flag, it was Tomac with. the moto and overall wins ahead of Osborne, Cianciarulo, and Honda HRC’s Christian Craig, who rode his best race of the season and finished a lonely fourth.

“I’m thankful that we were able to get to Lakewood for one of these nine Nationals,” said Tomac. “It was a really good day for us. I have been in a rough place, searching lately, but it feels good to get another win.” 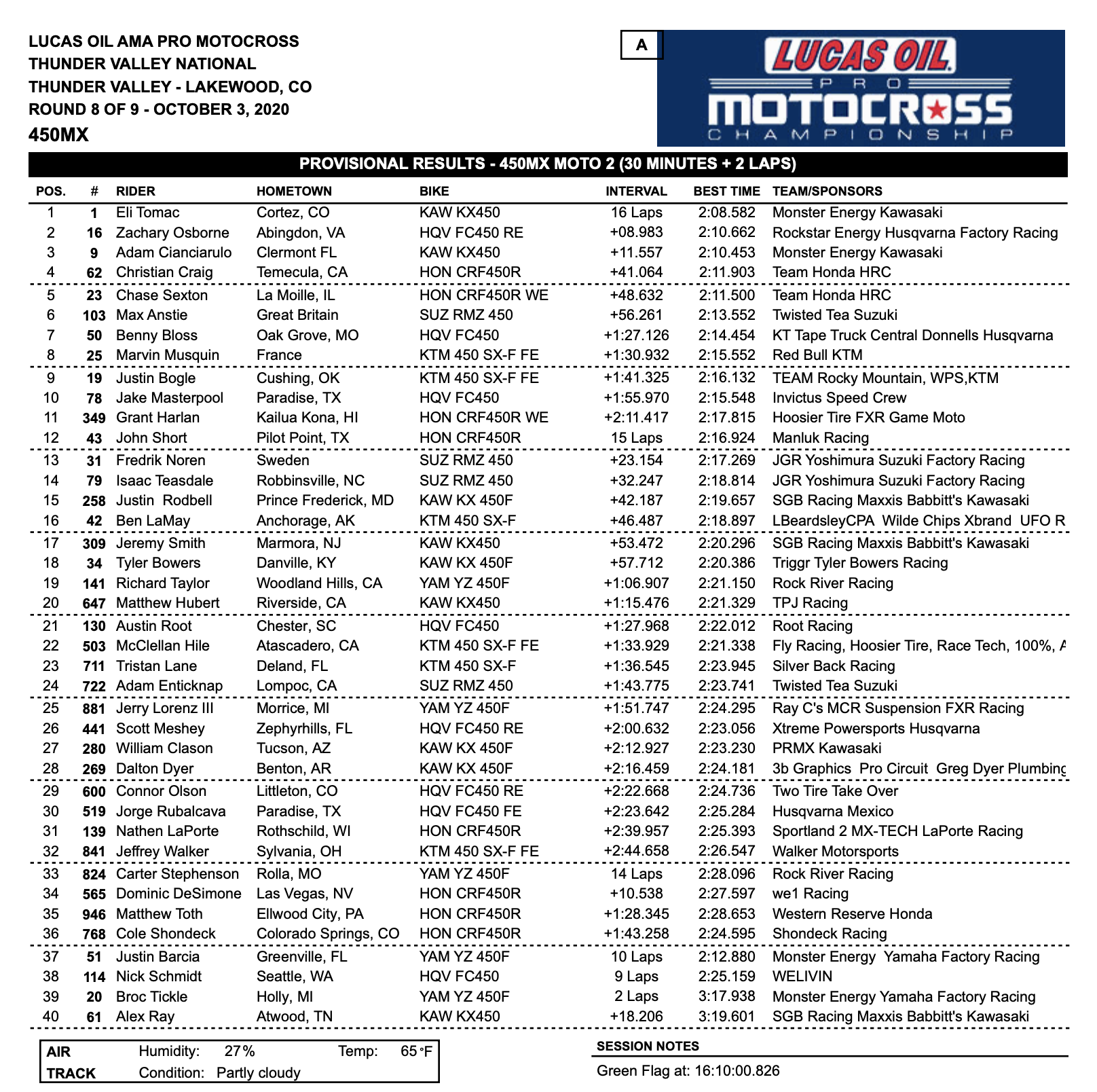 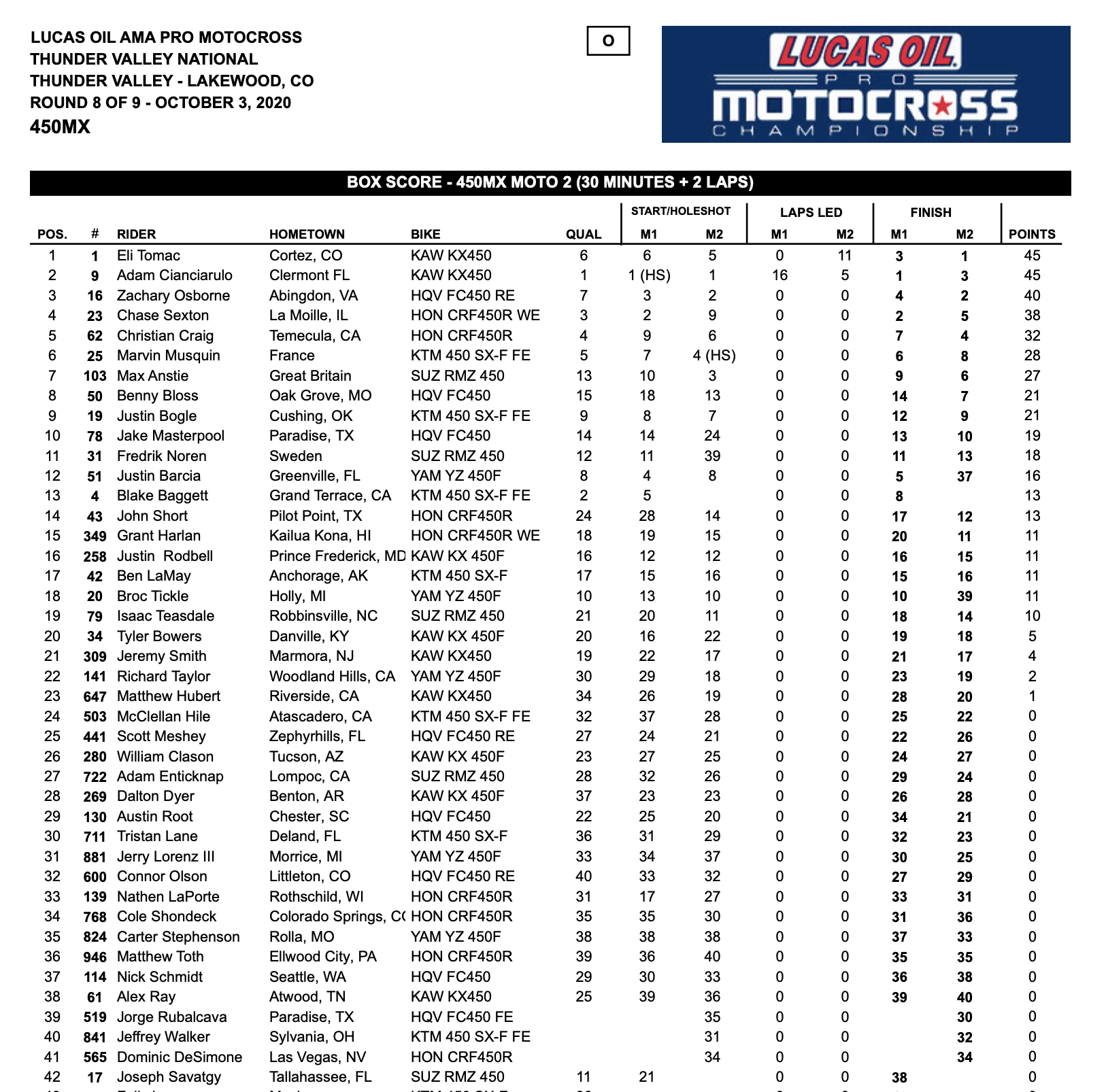 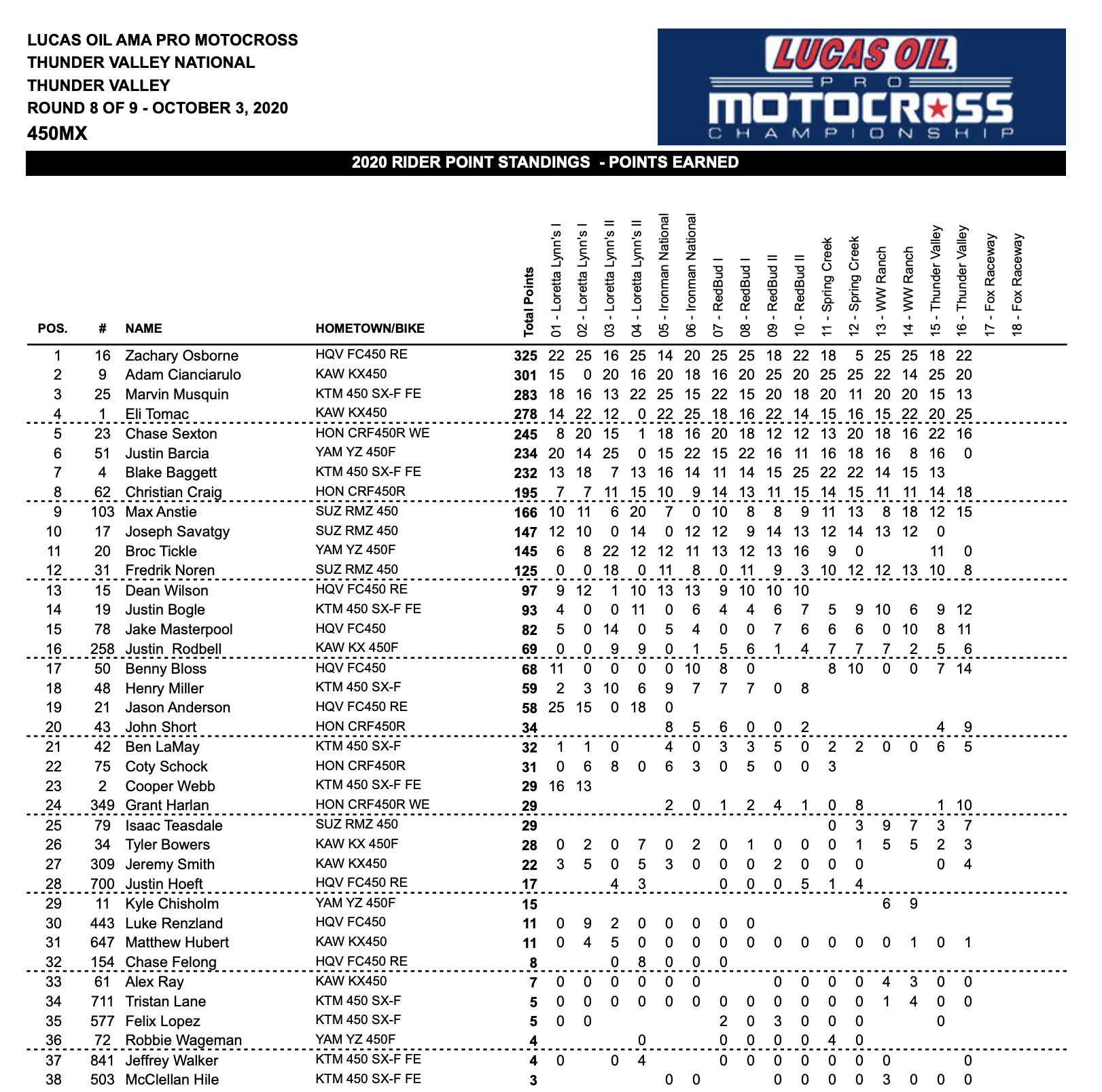