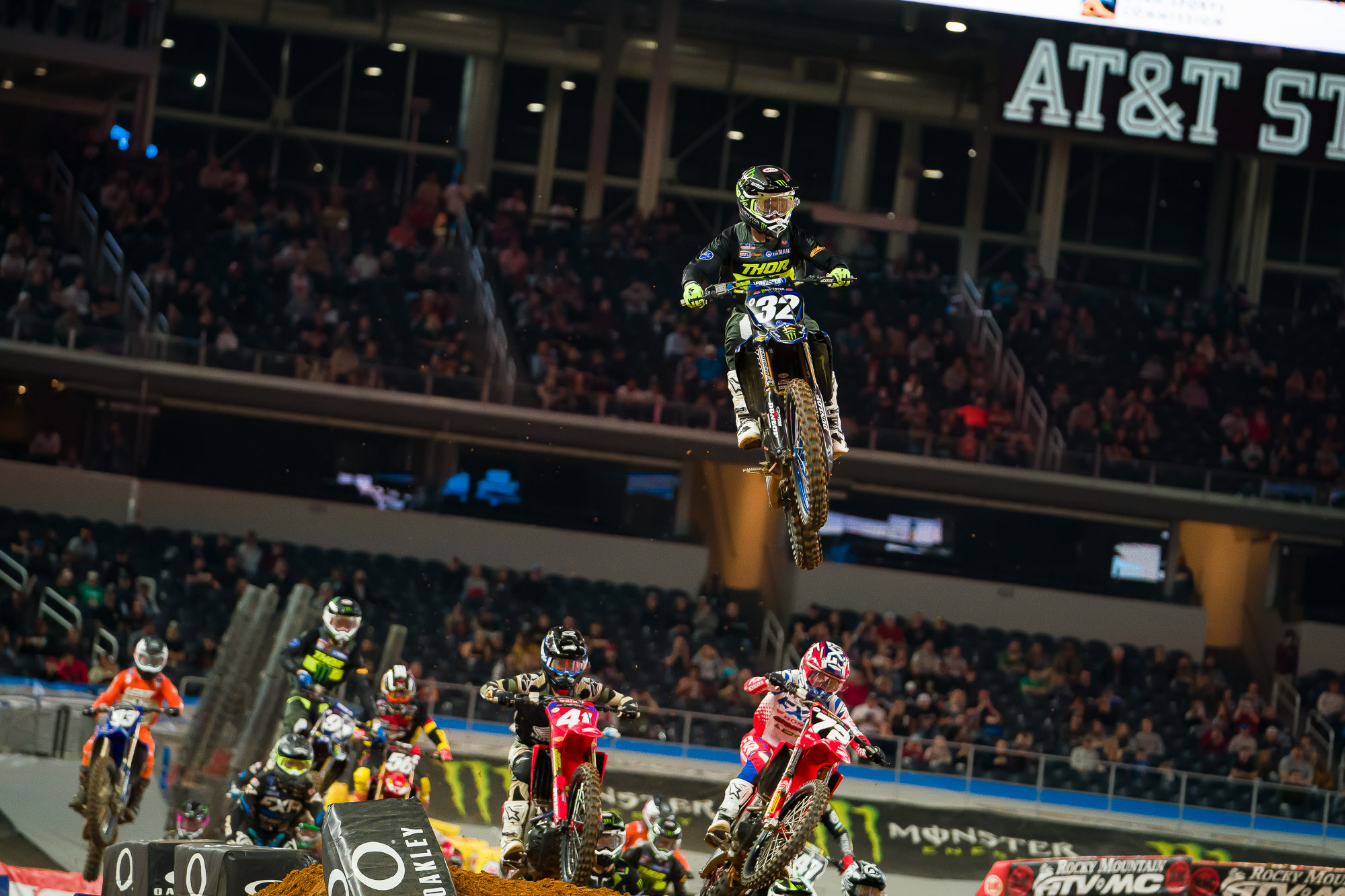 The 2021 Monster Energy Supercross Series wrapped up its time in Texas with the 2021 Arlington Three Supercross, the twelfth race in the championship schedule. The week at AT&T Stadium will go down as an important time for the championship chases, thanks to Cooper Webb’s clean sweep of the 450 Class and the red plate exchange between Cameron McAdoo, Hunter Lawrence, and Justin Cooper in the 250 West Coast region.

As the first race of the night left the gate, Jarrett Frye was off to the early lead as Mitchell Harrison and Jordon Smith collided mid-air and went down hard while up front. Cameron McAdoo was on Frye’s rear wheel and challenging early for the lead. On just the second lap, McAdoo darted past Frye and into the lead. Coty Schock ran in third with his teammate, Carson Mumford running in fourth. Garrett Marchbanks went down after the whoops and got trapped under his bike, ending his heat. Nate Thrasher made a pass on Thury for fifth place, as his fellow rookie teammate continued to charge in second place. Up front, Cameron McAdoo had pulled his lead out to over eight seconds on second place and the rest of the field. McAdoo took the checkered flag first and collected the win in the first 250 heat race.

As the second 250 heat race left the gate, Justin Cooper was off to the early lead after an excellent start. Seth Hammaker was running in second early but then made a slight mistake in the rhythm lane, allowing Jalek Swoll to make the pass. Hunter Lawrence then made the pass on Seth for third place. A few laps later, Hunter made another pass in the whoops, this time on Jalek Swoll for second. Kyle Peters was charging through the pack after a rough start, as he passed Wageman for eighth exiting the sand. Up front, Seth Hammaker began pressuring Swoll for third place, but Jalek responded by upping the pace and putting some time between himself and Seth. Justin Cooper took the heat race win after a perfect start-to-finish performance.

Ty Masterpool was off to the early lead after a great start but got shuffled back following the second corner. Ryan Surratt then took the lead, but only momentarily, as Michael Hicks bolted to the lead. Hardy Munoz and Garrett Marchbanks then passed Surratt for second and third. A lap later, Marchbanks jumped to the inside of Munoz and took second place. Mitchell Harrison then passed Surratt for fourth place, securing the final transfer position. Hicks made a slight mistake entering the sand, allowing Marchbanks to rail around the outside and into the lead. Soubeyras took Mitchell Harrison wide after the sand, leading to Harrison going down. Garrett Marchbanks took the LCQ win and moved onto the main event.

As the final 250 main event in Arlington left the gate, Justin Cooper was off to the early lead with Coty Schock just behind. Cameron McAdoo then blitzed past Coty through the whoops and passed into second place. Hunter Lawrence then passed into third and settled in behind McAdoo. Garrett Marchbanks jumped to the inside of Lawrence but then Hunter blitzed the whoops and passed him right back. Seth Hammaker made a mistake that collected Coty Schock and placed Coty in dead last. Meanwhile, Justin Cooper continued to lead with just over a second lead on Cameron. Jalek Swoll made a pass for sixth on Chris Blose, just was Nate Thrasher began pressuring Kyle Peters for eighth. Garrett Marchbanks leaned the bike over too much and went off track, dropping him to ninth place. However, Marchbanks set on a charge following his mistake, as he climbed from ninth place up to sixth place. Hunter Lawrence made a huge mistake at the end of the rhythm lane and went over the berm and into the net, dropping him from third to fifth place. As the checkered flag waved, Justin Cooper took the final win in Arlington and retook the points lead. 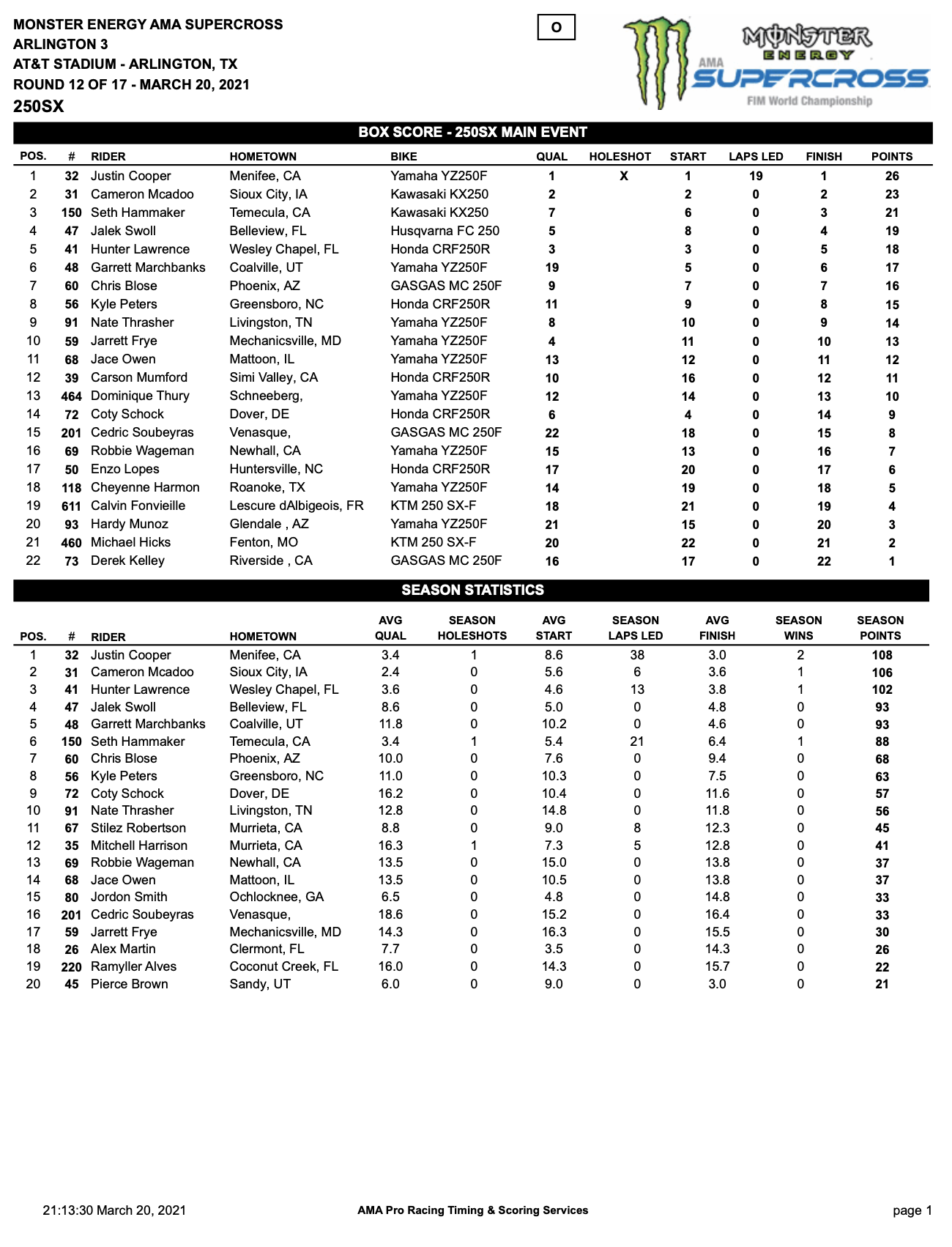 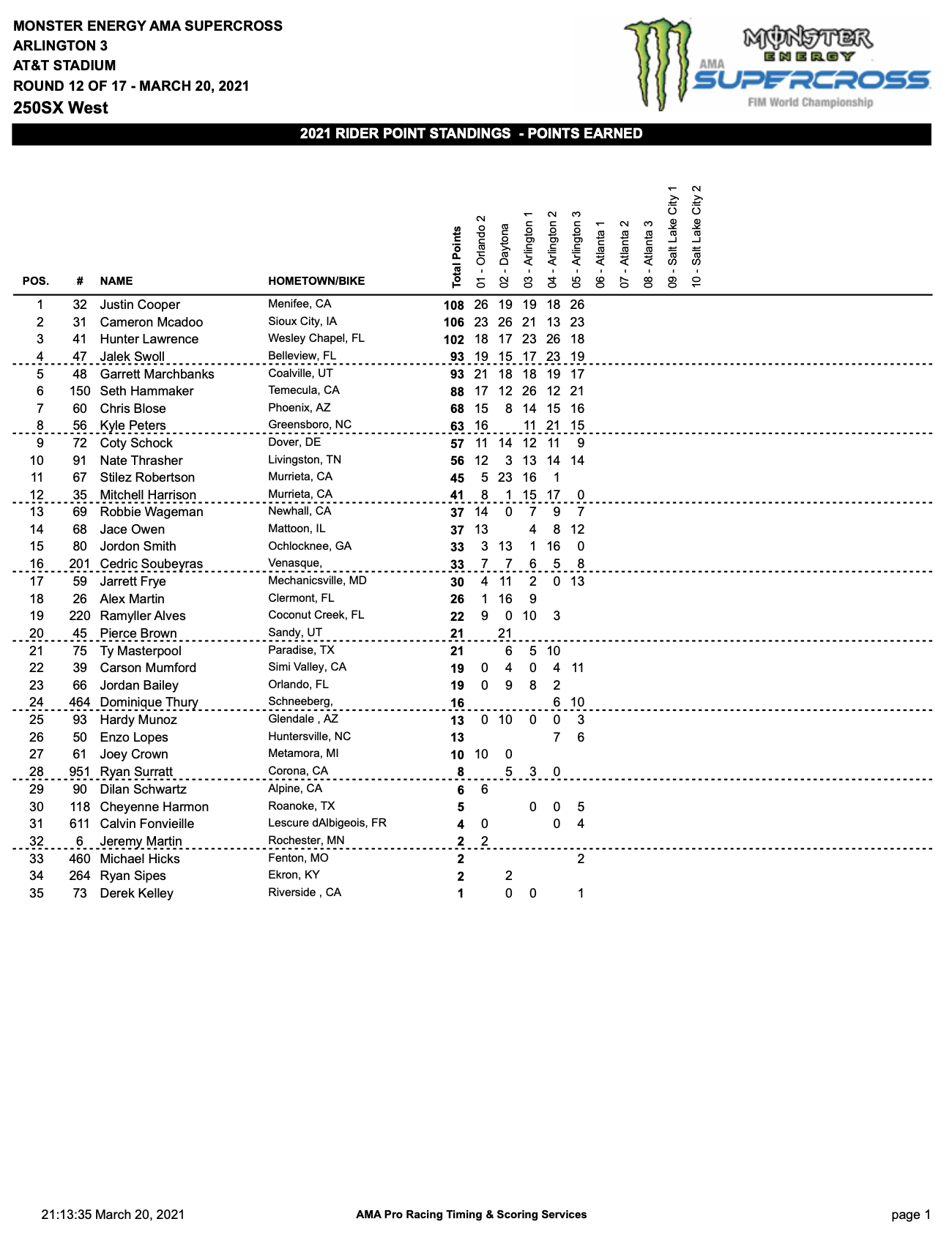 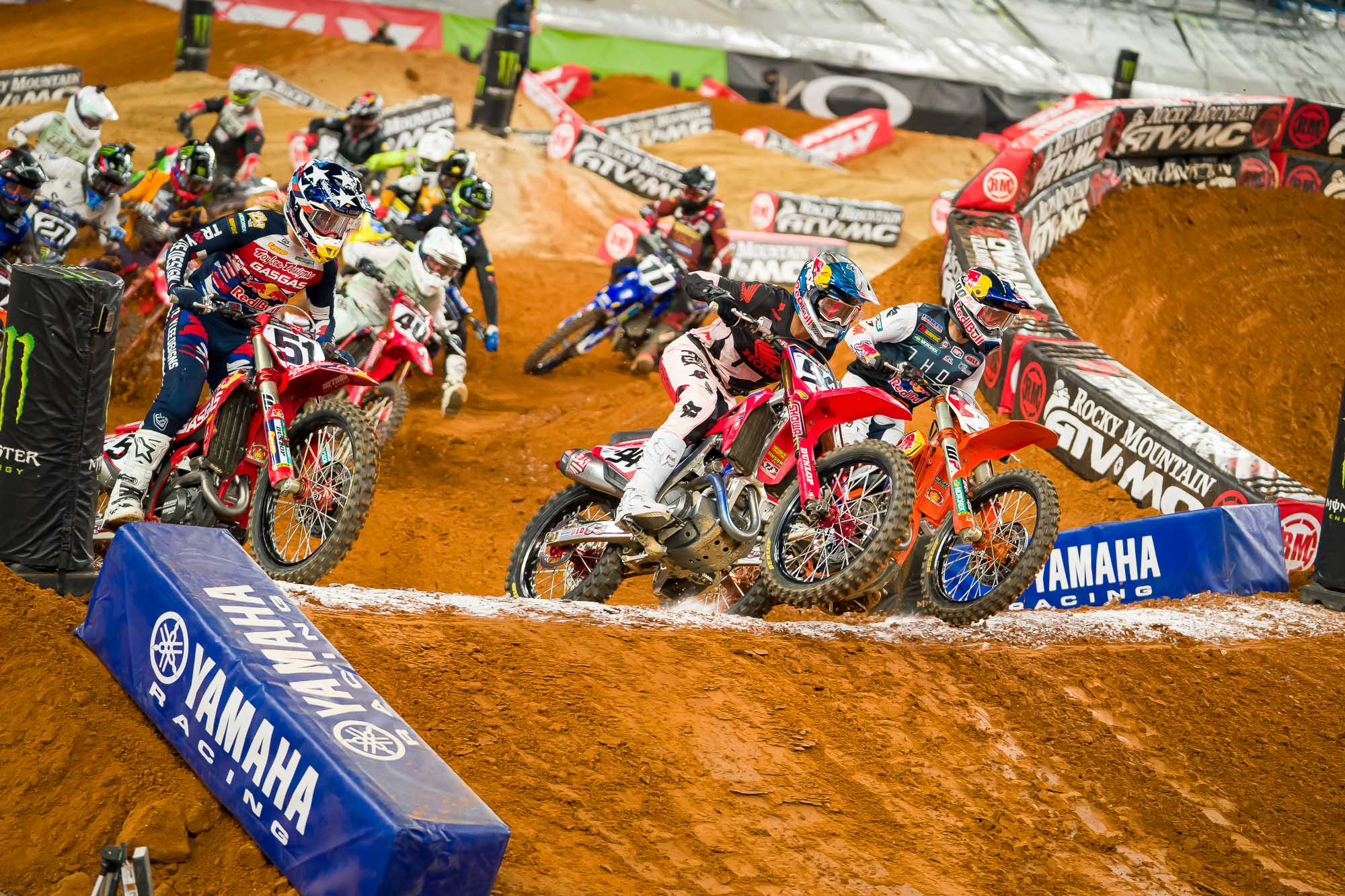 As the gate dropped for the first 450 heat, Justin Barcia was off to the early lead with Malcolm Stewart just behind. As they entered the third turn, Eli Tomac jumped to the inside of Malcolm and passed into second. Justin Barcia laid down some fast laps out front with Eli Tomac giving chase as the two broke away from the rest of the pack. Eli Tomac jumped to the inside of Barcia and made the pass after executing a faster rhythm. Aaron Plessinger raced behind Malcolm Stewart in fourth, as a battle for sixth place brewed between Tickle, Wilson, and Friese. Dean Wilson made the pass on Friese before giving chase to Broc Tickle. As the checkered flag waved, Eli Tomac collected the first 450 heat race win.

Cooper Webb was off to the early lead in the second 450 heat after a great start. Chase Sexton sat in second place, just ahead of his teammate Ken Roczen. Ken dove to the inside after the sand and made the pass on Sexton for second place before they began their second lap. Roczen then set his sights on Cooper Webb and the lead. After a few laps of trailing Webb, Ken Roczen jumped to the inside of Cooper and took the lead after nailing the faster rhythm. Cooper Webb then has a bobble in there whoops and nearly gets passed by Sexton. Webb and Sexton then began battling over second place, as Roczen checked out. Jason Anderson began pressuring Marvin Musquin for fourth place after battling his way through the pack. Chase Sexton went inside of Webb before the whoops and took Cooper down for second place, costing Webb three positions. As the checkered flag waved, Ken Roczen took the heat race win.

As the 450 LCQ left the gate, Justin Starling was off to the early lead, and a solid one, after executing a faster rhythm than the rest of the field. Brandon Hartranft ran in second with Cade Clason just behind. Tyler Bowers was making moves, as he jumped inside of Moranz and into a transfer position. Clason and Bowers reeled in Hartranft and began pressuring for second place. Meanwhile, Justin Starling remained out front with a comfortable lead. Bowers then made the pass on Clason for third. With one lap to go, Clason and Bowers began battling again, allowing Alex Ray to catch up. Alex passed Clason, but then Cade took Ray wide. In the turn before the sand, Alex ran it in on Cade and took him wide, securing the final transfer position. Justin Starling took the LCQ win and led Hartranft, Bowers, and Ray into the main event.

The 450 main event was off and Ken Roczen was off to the early lead with Cooper Webb and Justin Barcia alongside. Eli Tomac crossed the finish line on the first lap in fourth place, just behind Barcia. Joey Savatgy was running in fifth place but got shuffled back to eight after a few laps. Marvin Musquin was seen riding into the tunnel and appeared to be out after going down early. Eli Tomac made the pass on Barcia for third, just before Chase Sexton went down hard in the sand, ending his night. Tomac was setting the fastest laps on the track and reeled in Webb quickly to challenge for second place. As Webb ups his pace to keep Tomac behind, the dueling pair catch up to Ken Roczen and the lead. Justin Barcia then reeled in the top three and entered the picture. Cooper Webb went for the pass before the whoops but was unable to complete it and then a lapper slowed both of them up, spreading them out a little more. Just as Tomac was beginning to gain traction on Webb, he made a costly mistake and hit a tuff block by the finish line, allowing Barcia to close in. Justin Barcia then took Tomac wide and took third place. A lap later, Webb went for the pass on Roczen, but then Roczen responded as the two sat shoulder to shoulder for half a lap. Webb then dove under going into the whoops and managed to get a good enough drive to beat Ken to the corner and complete the pass for the lead. As Cooper Webb built on his lead, Justin Barcia and Eli Tomac began to close in on Roczen. Justin Barcia then made a mistake in the rhythm, allowing Tomac to jump to the inside and take away third place. As the checkered flag waved, Cooper Webb grabbed the win and swept Arlington. 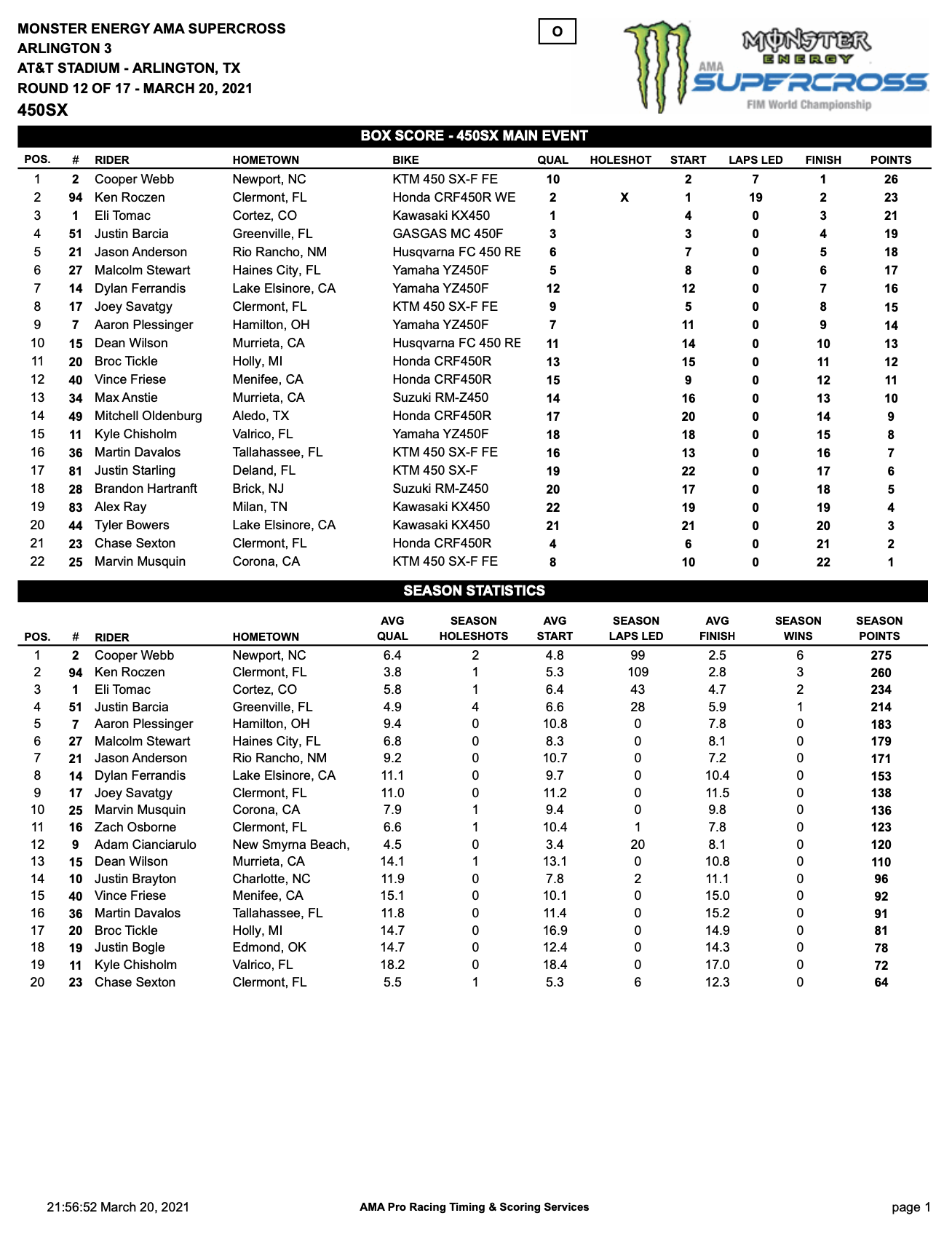 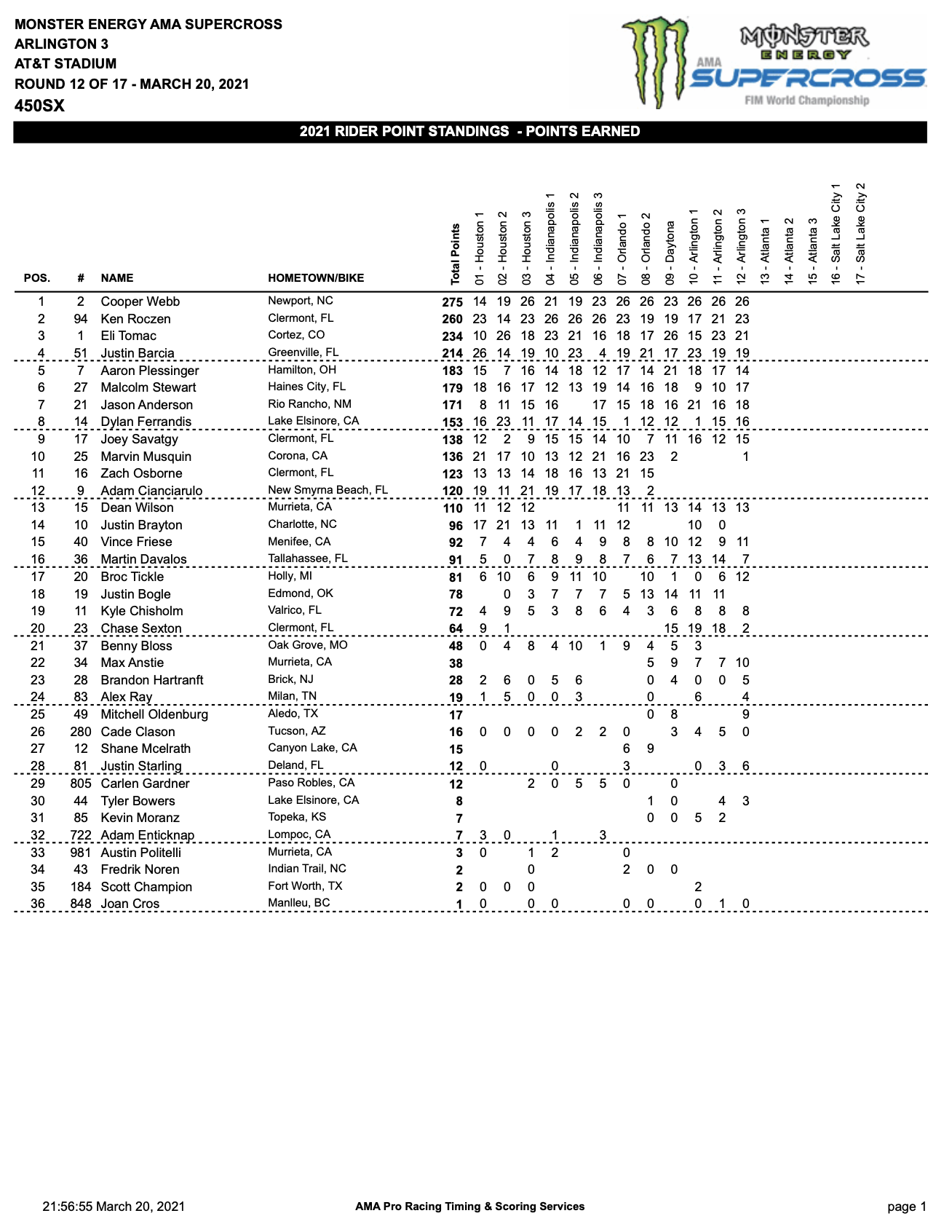