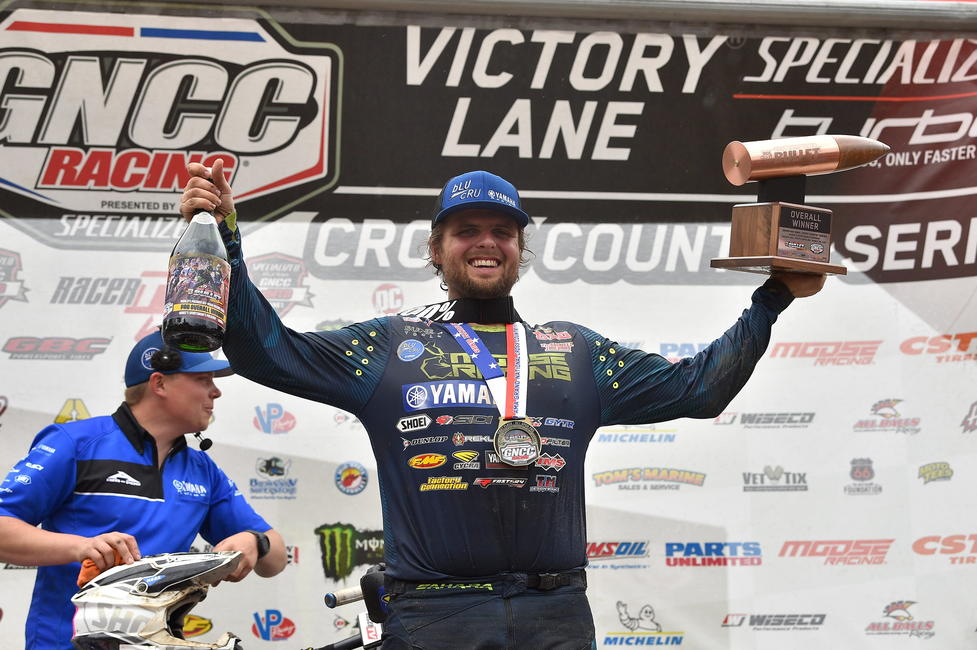 The 2021 Grand National Cross Country Series continued its early season charge with the 2021 Camp Coker Bullet GNCC, the fourth round of the East Coast off-road series. Stu Baylor and Josh Strang stayed close through the hours in the woods of South Carolina, proof that the two are evenly matched, while Ben Kelley finished well enough to retain the top spot in the standings.

Strang and Baylor set the tone for the race very early, as Strang scored the holeshot on his Babbitt’s Online/Monster Energy/Kawasaki Team Green bike and AmPro Yamaha’s Baylor pushed past other riders to reach second place. From that point on, the two stayed within sight of each other and swapped the top spot a few times, a close battle that was made even more exciting by a mid-race rain storm. The change in course conditions, dry and dusty early then wet and technical in the closing stages, made the last few laps a mad-dash to the finish. Strang held the lead at the start of the final lap, but Baylor found a way around and controlled the track all the way to the finish for his second win of the season. This was an important result for Baylor, as he missed the opening round and has had to claw his way back into contention.

Jordan Ashburn rounded out the podium while Ben Kelley and Grant Baylor finished in the top-five, results that show each rider has potential to end the season with some sort of award. Ashburn and Kelley’s duel proved to be important for both, as Magna1 Motorsports/Husqvarna’s Ashburn took third place on the fourth lap and held it all the way to the finish while a fourth-place finish by Kelley kept the FMF/KTM Factory Racing rider at the top of the points.

Jonathan Girroir was a force in the XC2 division. The Coastal GASGAS Factory Racing rider claimed the lead early, held off Lyndon Snodgrass when the Babbitt’s Online/Monster Energy/Kawasaki Team Green rider went on a charge, and ended the race at the top of the class and fourth overall. Girroir’s point lead is now in the double-digits. Rockstar Energy Factory Husqvarna Racing’s Craig DeLong started the race in sixth place, passed his way through the field, but was too far behind to make a run at the leaders, and finished the race on the podium.