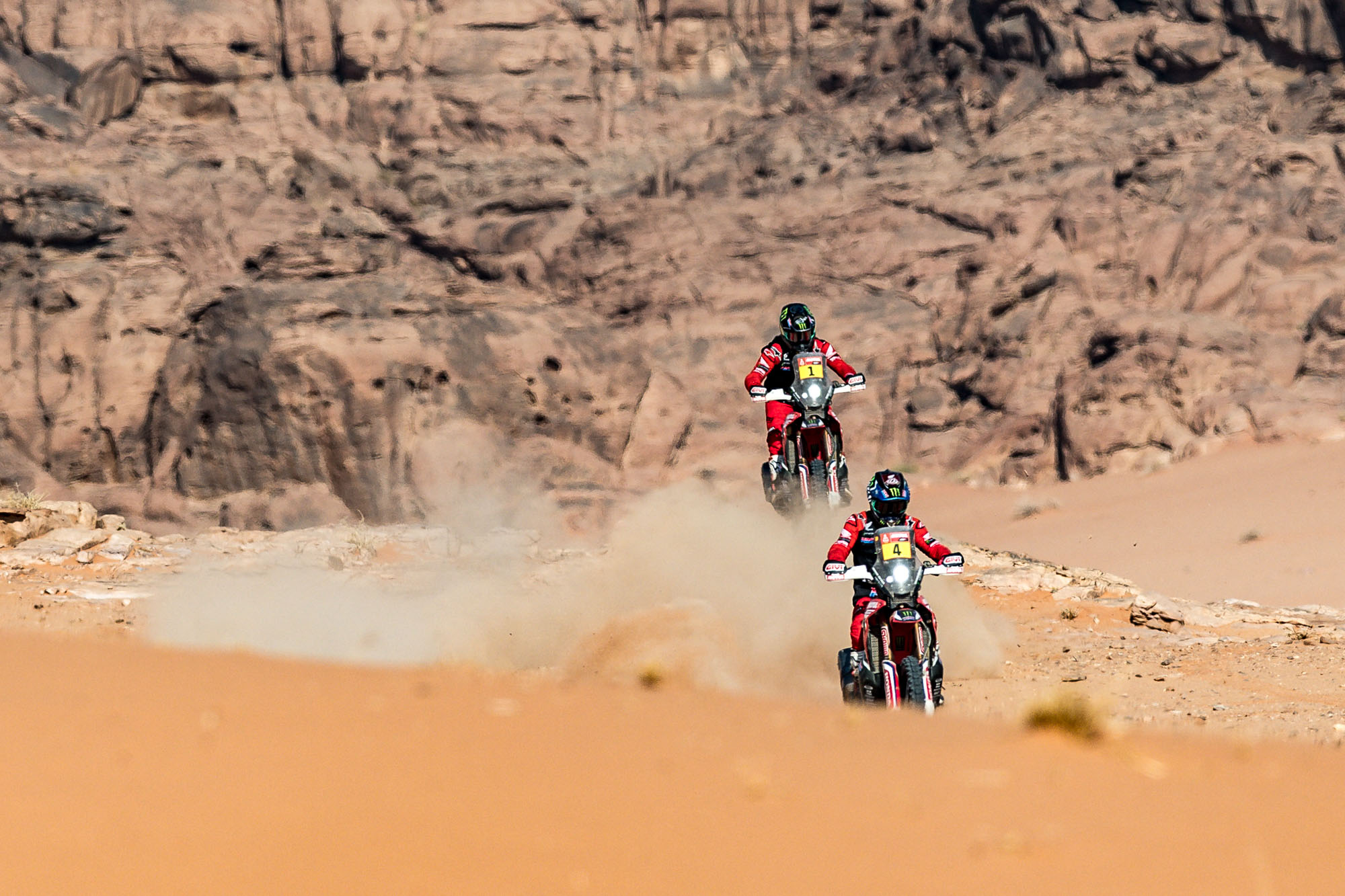 The 2021 Dakar Rally continued with Stage Eight, a 709 kilometer trip from Sakaka to Neom that took riders over gravel, stones, and sand. Updated rules for the “marathon” days of the event prohibited outside assistance from mechanics or the exchange of parts in the bivouac, so riders made the most of their limited resources, nursed their motorcycles, and limited the time lost to others in the field.

José Ignacio Cornejo is the only rider to lead the overall for two consecutive days in this year’s race. One of the first riders sent out at the start of the day, Cornejo caught up to fellow Monster Energy Honda Team rider Ricky Brabec at the refueling point, and together they trekked across the desert, a pace that got Cornejo the Stage win and Brabec a third-place finish. Cornejo will hit the track first on Tuesday, which could challenge his excellent navigation skills.

Toby Price is known for a riding style and ability to conserve the motorcycle, which proved to be crucial for the Red Bull KTM Rally during Stage Eight. A destroyed rear tire (rip in the sidewall) cost Price time the day prior, and with no chance of changing the rubber, he was forced to patch it with zip-ties and tape. With a cautious plan, Price managed to make it through Monday with the tire attached to the rim and only lost about a minute to Cornejo.

Sunday’s ride left Sam Sunderland with a wobbly front wheel on his Red Bull KTM Rally bike, but he adjusted it to be straight as possible and set off on Monday. A fourth-place finish on the day keeps Sunderland in the hunt for the overall win, as he’s in third place overall and just under six minutes back of the leader.

The top-three in the overall standings are all split by less than 10 minutes as we enter the Rally’s final days. Still, there are plenty of riders and possibilities that could change that, including the Monster Energy Honda Team trio of Kevin Benavides/Joan Barreda/Ricky Brabec.

Crashes or mechanical issues eliminated a handful of riders in Stage Eight. Xavier De Soultrait went down hard and will sit out the remainder of the Rally, a terrible turn for a rider that was in contention for the overall win. Franco Caimi’s Monster Energy Yamaha Team bike let go in the middle of the desert, the second DNF for a factory blue bike.