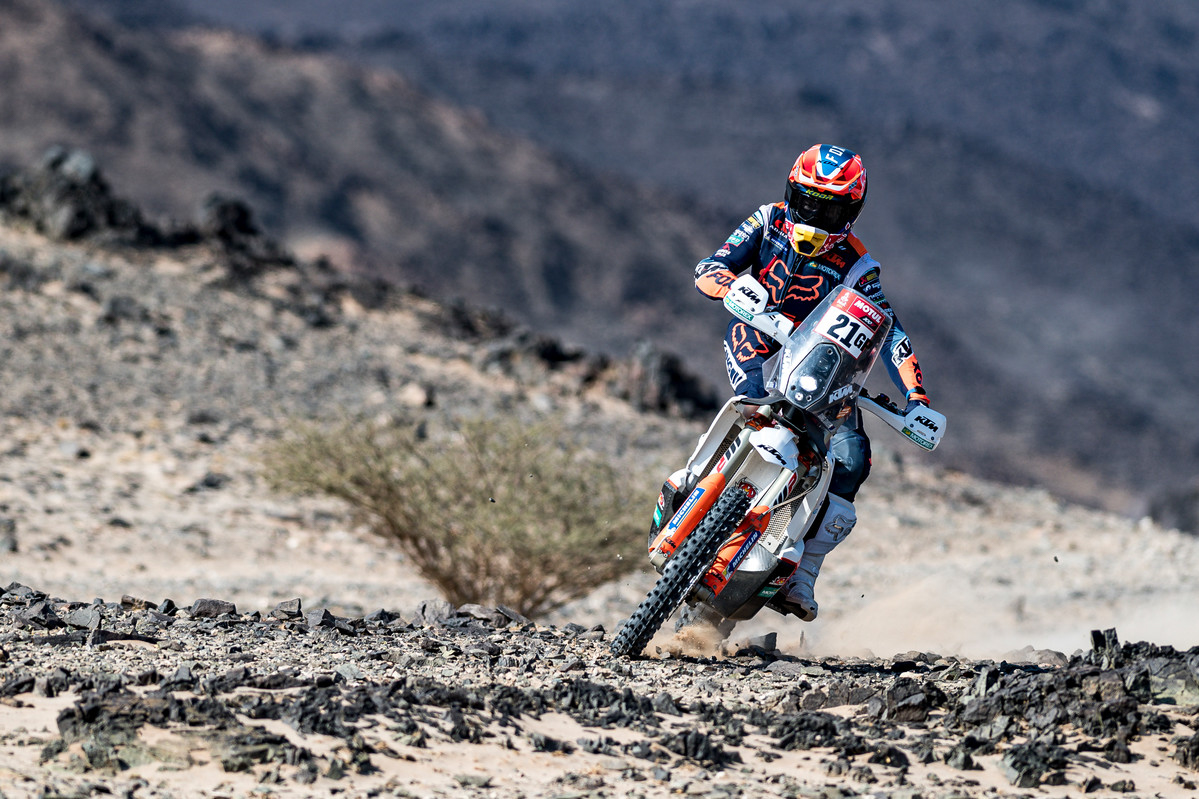 The 2021 Dakar Rally continued with another day in the desert. The 856-kilometer trip from Wadi Ad-Dawasir to Riyadh is one of the longest and fastest legs of this year’s endurance event, with two 200-kilometer-plus liaison roads split by a 337-kilometer special. There was another mix-up in the General Timing results, an exciting trend that is expected to continue on a little longer and has forced riders to rethink their day-to-day strategy.

Certified Dakar Legend Joan Barreda claimed his second Stage win of the year. The Monster Energy Honda Team rider was the 30th rider sent off on Wednesday and followed the defined tire marks cut by the leading pack of riders to follow to make up ample time. The ride took him from eighth place to second place in the overall rankings.

The “yo-yo” continued on Wednesday when Red Bull KTM Rally Factory’s Toby Price gave up a fair amount of time to others after a handful of mistakes and navigational errors. Price was sent off into the open space first after his win the day prior, finished the Stage in 22nd place, and is now eighth. The multi-time champion trails the overall leader by just under eight minutes.

Monster Energy Yamaha Rally Team’s Ross Branch was one of the fastest riders on the day, something that was reflected at all but two checkpoints, but a navigation error and a one-minute penalty cost him late in the day. Despite this, Branch finished the Stage in fourth place and is now third overall.

Ricky Brabec has decided to sacrifice Stage wins for a chance at a second overall win. The Monster Energy Honda Team rider spent a few days in the lead group, but after mistakes and time lost to others, he has decided to situate himself in the middle of the pack and let others cut the first tracks in the sand. It’ll take a few days to know for sure if this attempt to bunch the field is working, as Brabec trails the leader by 16-minutes.

Xavier De Soultrait has been very, very consistent through the opening stint of Dakar. An accomplished Rally rider, De Soultrait hovered around the top-five through the first few days and put in a solid day aboard his HT Rally Raid Husqvarna to overtake the lead in General Timing.

A crash by CS Santosh cast a shadow on the day. The HERO Motorsports rider went down hard enough to require medical assistance, was first tended to by fellow racers, considered “stable,” and was choppered to a nearby hospital.