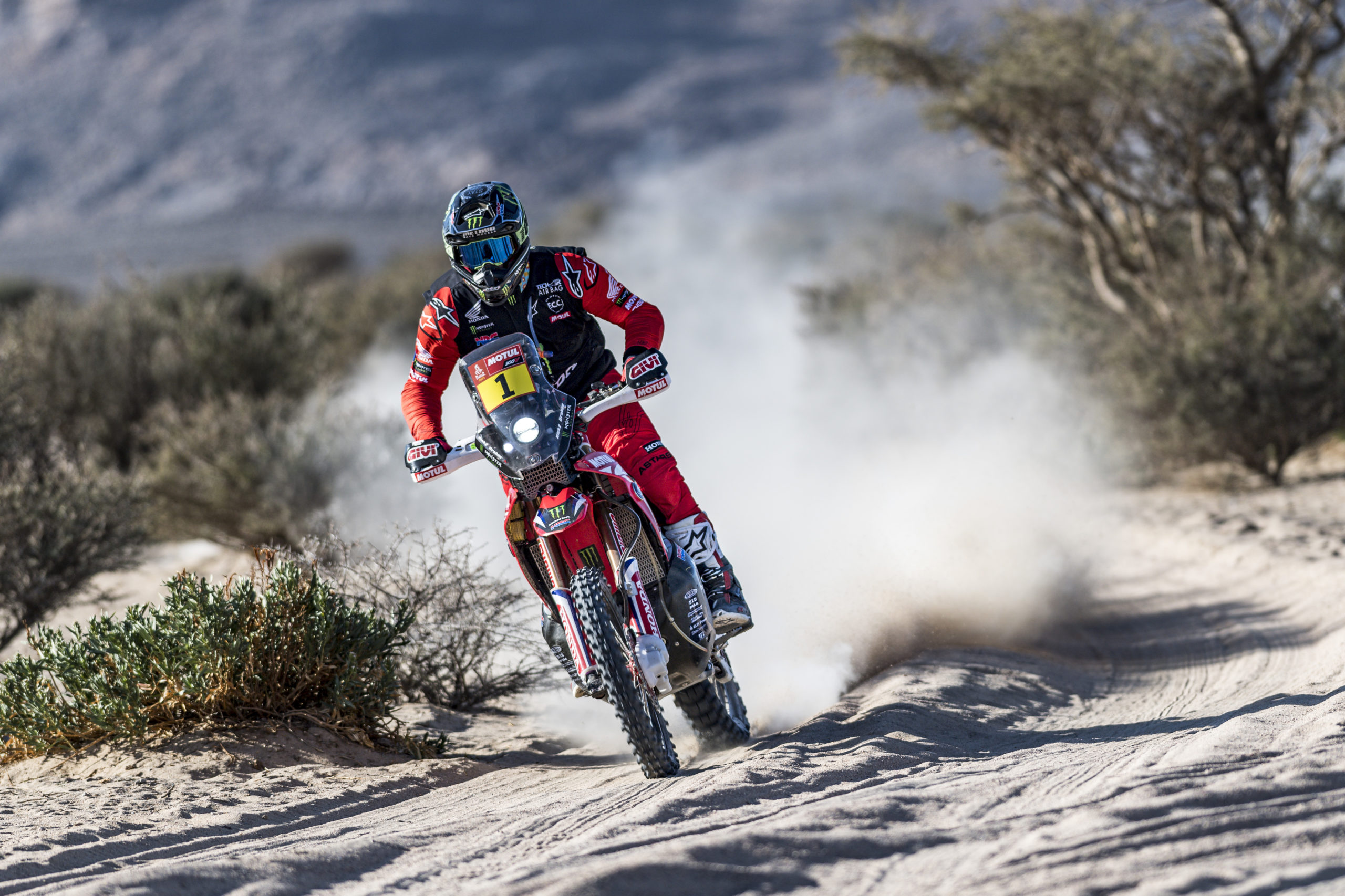 The 2021 Dakar Rally is officially underway! The first leg of the 12-day race through Saudi Arabia kicked off with a very short Prologue event near Jeddah on Saturday and went off into the expansive Middle Eastern desert with a run from Jeddah to Bisha on Sunday. Although only 633 kilometers have been completed, competitors already have an idea of how things will play out over the next two weeks.

Racers used the Prologue as their chance to shake down the machines, get back into a race mindset, and set the order for Stage One. The 10-kilometer lap laid out near the Jeddah base was very quick, offered mixed terrain, and kept riders very close on the clock, as less than 30-seconds separated the top ten.

Ricky Brabec was the fastest of the Motorcycle group and after a 6:01-minute run, the defending champion was set to be sent out first on Sunday. How close was the rest of the pack? Monster Energy Honda Team’s Joan Barreda was second with a 6:07, Red Bull KTM Rally Factory Team’s Daniel Sanders was third with a 6:14, Monster Energy Yamaha Rally Team’s Ross Branch was fourth with a 6:15, and Hero Motorsports Team Rally’s Sebastian Buhler was fifth with a 6:17; the General Timing for the Prologue increased the gap between everyone.

Riders covered 623 kilometers of asphalt roads, dry river beds, busted rocks, elevation, and dirt trails during the opening day, which included a timed “Special” as part of Stage One. The first real day of action resulted in a massive change to the running order, as a daring few decided to push the pace when others started their tire saving strategies or struggled with navigation. It’ll be interesting to see how what happens over the next few days because multiple riders said they expect big swings in the results and the upcoming stages will include time in the dunes.

Troubles with the new route cost Ricky Brabec and Joan Barreda a sizeable amount of time. The Monster Energy Honda Team riders were sent out first due to their finish in the Prologue but then had problems with the roadbook and navigation systems in the very early moments of the day and plummeted down the running order. Brabec ended the day 18:17 back of new the lead group and ranked 24th, while Barreda was 15:25 adrift and ranked 20th.

Daniel Sanders started near the front and stayed on two wheels, a big feat for a rookie at the Rally, but was later dealt a seven-minute penalty for speeding and dropped to 25th.

The issues by others allowed Toby Price the perfect opportunity to put in a charge. The Red Bull KTM Rally Factory Team rider had a small issue with the route early in the Stage, but made up ample time through the middle portion of the day and is now ahead in the General Timing by more than a minute.

Stage One’s race time was well over three hours, but somehow Monster Energy Honda Team’s Kevin Benavides and Red Bull KTM Rally Factory Team’s Matthias Walkner crossed the finish line with the exact same time, 03:18:24. They are now second and third overall in the results, with 1:15 minutes between them.