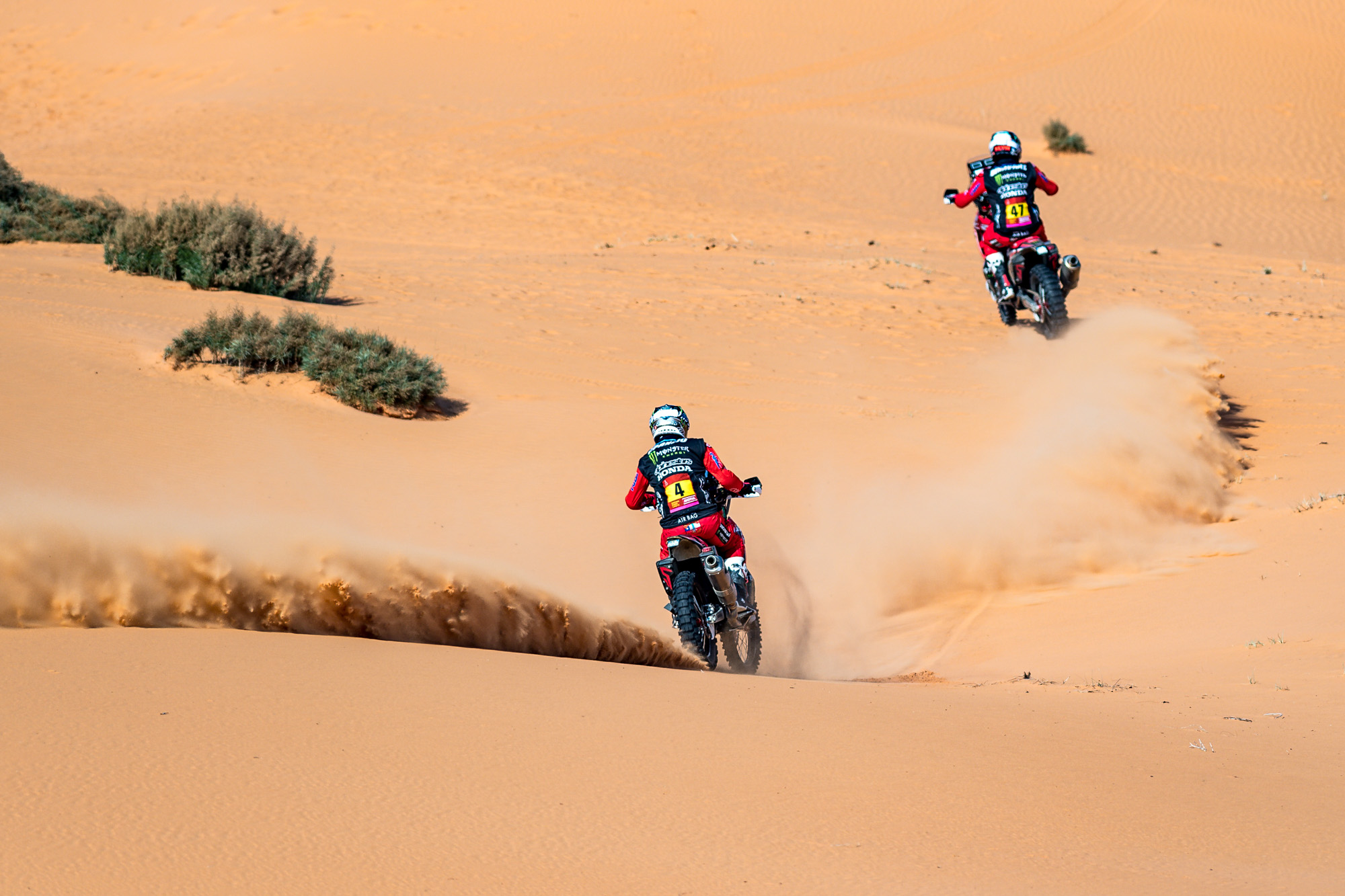 The first half of the 2021 Dakar Rally is complete. Stage Six of the two-week race was originally planned to be 448 kilometers, but following the challenges and issues of the previous day, the organizers decided to shorten the route down to 347 kilometers.

The bivouac will take a one-day break in Ha’il, located in the center of the Saudi desert, and resume the race on Sunday.

Another win for Joan Barreda. The Monster Energy Honda Team rider made it clear that being further back in the pack is advantageous and cut the fastest route from checkpoint to checkpoint, which earned him his third Stage win of the year. This took him to seventh overall in the General Timing standings and third overall in the all-time Stage win records.

Barreda’s 27th career-victory denied Ross Branch of his first-ever win. The Monster Energy Yamaha Rally Team rider ran a pace that was 13-seconds slower, a small amount of time compared to the 3:45 hour race day. Although he was denied a win, Branch moved up to fourth in the overall results.

Despite the seven days of riding and thousands of kilometers covered, Ross Branch and Xavier De Soultrait currently have the exact same overall time, 24:12:24, and both are within the top-five. Incredible.

Daniel Sanders has been impressive through this year’s race and a third-place finish on the day gave the KTM Factory Racing rider a nice boost going into the weekend’s break. Sanders is now sixth overall.

Kevin Benavides and José Ignacio Cornejo stayed together for most of the day on their Monster Energy Honda Team bikes, a pact that took some of the stress of navigating off their plate yet allowed others in the pack to make up time. Getting through the day issue-free was important for Benavides, as he’s still reeling from Stage Five’s hard crash, even if it dropped him to second overall. Cornejo is right behind him in third overall.

Toby Price put in a very consistent day aboard his Red Bull KTM Rally bike. He and a few other riders decided to link up for the day, a popular tactic that lessens the chance of getting lost or giving up time at this point in the race, and the multi-time winner worked into the overall lead.

Ricky Brabec needs to mimic his Stage Six performance, and then some, to keep a shot at the title. The Monster Energy Honda Team rider was fourth-fastest on the day, made up nearly seven-minutes in overall time on the leaders, and is now 13th overall.