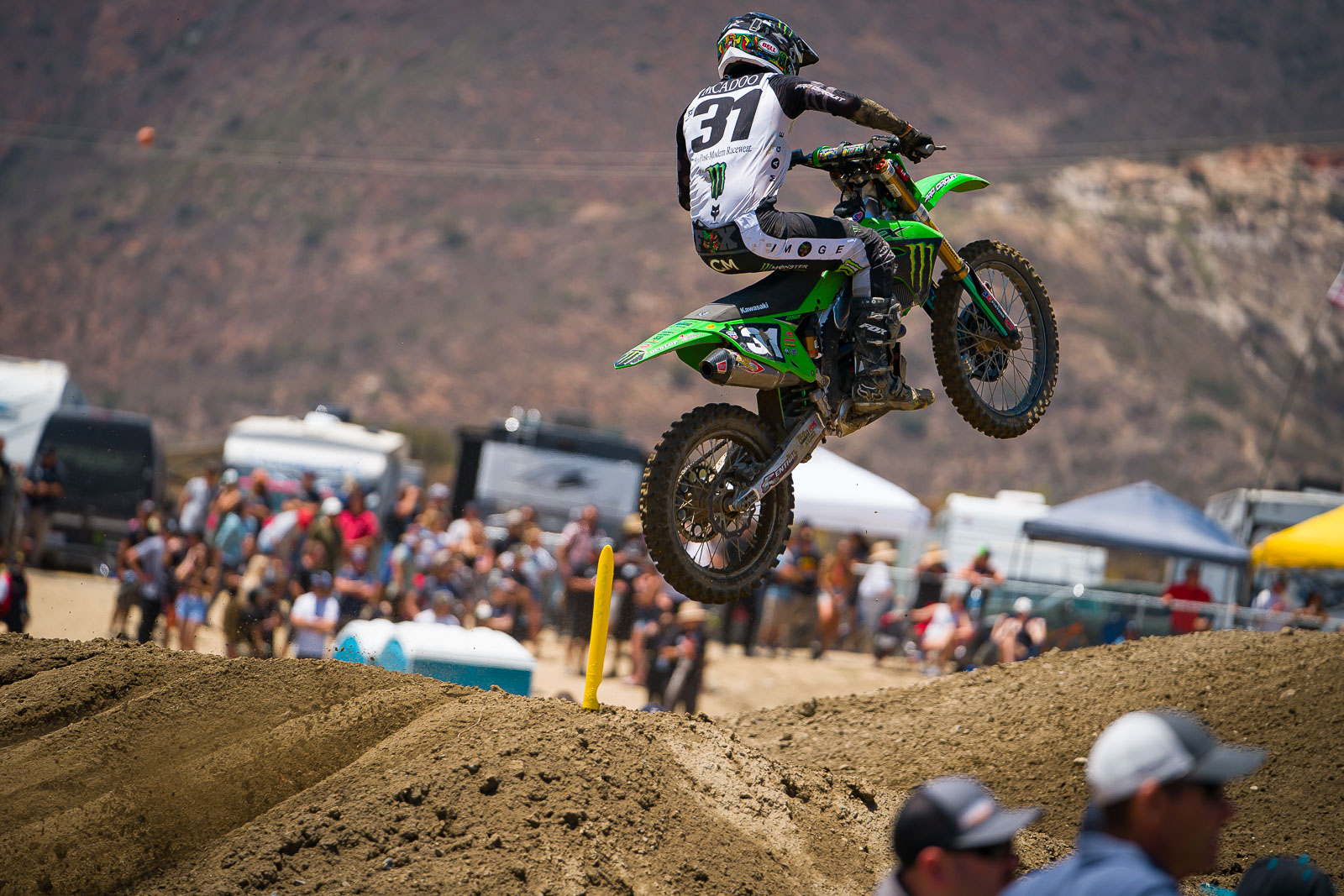 Cameron McAdoo’s summer was cut short by a crash in 250 Moto Two at the 2021 Fox Raceway Motocross that has resulted in a torn ACL and tibia fracture, injuries that will require surgery, and a lengthy recovery time.

The Monster Energy/Pro Circuit/Kawasaki rider started the day’s second moto around the top-10 and spent the middle part of the race in a fight for position with Troy Lee Designs/Red Bull/GASGAS Factory Racing’s Pierce Brown. Unfortunately, an incident between the two occurred near the mechanic’s area on lap nine and caused McAdoo to jam his outstretched leg into the ground. The pain prevented him from getting off of the track on his own, and after some assistance from course workers and the PC team, McAdoo was loaded onto the Alpinestars Mobile Medical Mule and taken to the on-site clinic for evaluation. We had heard that damage to the knee was the primary concern after the race on Saturday, and Kawasaki’s post-race press release stated that he would undergo tests and scans this week.

On Tuesday night, McAdoo detailed the full extent of the damage and confirmed that he will soon go under the knife to have it repaired. “This is definitely not the news I would like to have, and very hard to accept as there is so much work put in to prepare for the season as a rider and team collectively,” he stated on Instagram. “Unfortunately on Saturday in Moto Two, I came together with another rider and ended up landing with my knee straight out. I knew right away that something wasn’t right. I got the results back today and my ACL pulled and fractured the top of my Tibia bone off. I will be getting it fixed next week and begin the process of working to get back healthy. Thank you all for the support through the good and bad.”

Although there is no set timeline for recovery, injury ligament damage of this sort typically requires a few months of healing before getting back on the bike.

McAdoo had a successful, albeit eventful season in 2021. He scored his first Main Event win in the 250 Class at the Daytona Supercross, momentarily ran the red plate in the 250 West Coast region, and endured a handful of hard crashes, all of which helped him rise to prominence as a front-runner in the 250 Class.

This is the second Monster Energy/Pro Circuit/Kawasaki rider to be benched by injury this summer; Jordon Smith announced last week that a shoulder injury and surgery will keep him from lining up during the Pro Motocross season.