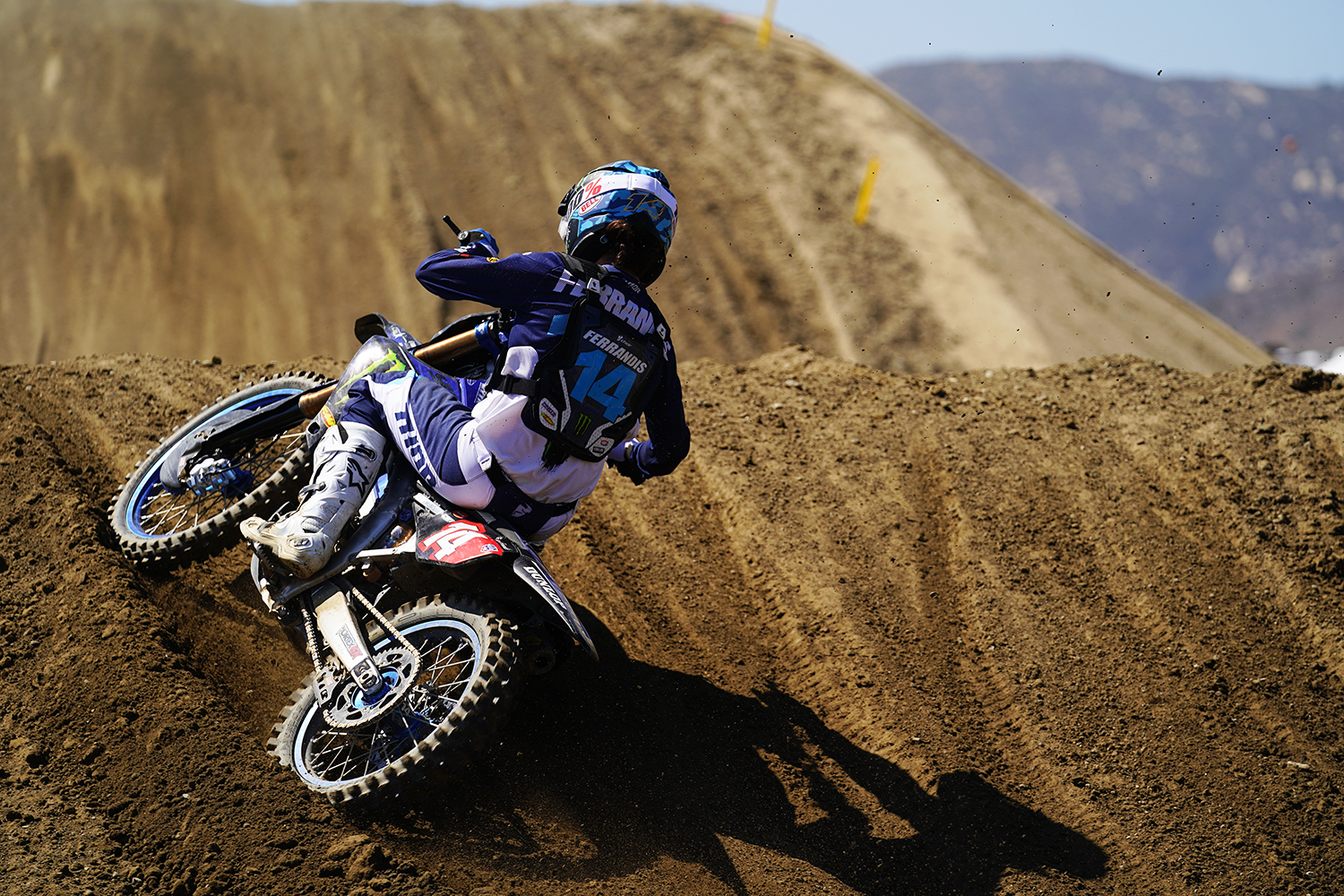 The 2021 Lucas Oil Pro Motocross Championship returned to Southern California for the 2021 Fox Raceway Two Motocross, the eleventh round of the long summer. A revamped course layout that had been reversed from the opening round gave racers a new challenge while triple-digit arid heat zapped them during their Motos, which saw three race winners, one 1-1 sweep in the 250 Class, two elite riders tied on points in the 450 Class, and an AMA national championship.

As the first race of the day left the gate, Maximus Vohland was off to the early lead with Joshua Varize just behind. However, Michael Mosiman made quick work of the leaders and bolted to the inside after the holeshot line to take over the race lead. Jett Lawrence sat in fourth place early-on, but then made the pass on Varize to pick up third. Jett then started working on Vohland for second place, as Mosiman began to check out. A few laps later, Jett swept inside after ripping an outside line to make the pass on Vohland. Rj Hampshire then followed a lap later to make the pass on Maximus for third place. Back in the pack, Hunter Lawrence began closing on Justin Cooper, who held down seventh place. Michael Mosiman began to pull away from Jett even more, but came in a little hot and went down after losing the front wheel. Mosiman remounted but not before dropping back to fifth place. Just before the lead change, Austin Forkner went off the step-up sideways and landed off-track, hitting a tree in the center of the course. Jo Shimoda began pressuring Vohland for third place but lost some time after losing traction while going for the pass. Mosiman then joined the battle for third, as he challenged Shimoda and made the pass on both Shimoda and Vohland in the matter of two corners, placing him in third. Shimoda then made the pass on Vohland for fourth place a few sections later. Jett Lawrence continued to lead, as he had now built up a seven-second lead on RJ Hampshire. Laps later, Mosiman charged up to Hampshire and made a quick pass for second place. With three laps to go, Justin Cooper made the pass on Hunter Lawrence for fifth place, but Hunter was right back on Cooper’s rear wheel and challenging for the position. As the checkered flag waved, Jett Lawrence snagged the moto one victory at Fox Raceway.

The second 250 moto was off and Jett Lawrence was off to the early lead with Michael Mosiman and Justin Cooper just behind. Ty Masterpool and RJ Hampshire were down off the start after tangling just after the gate. Jett Lawrence began to build a lead over the rest of the field, as Justin Cooper stuck just behind Mosiman; trailing and challenging for second. Cooper looked inside a few times, but Mosiman blocked the line each time. Michael then pulled away from Justin Cooper and away from the pressure. Austin Forkner went for a pass on Varize, but couldn’t get on the brakes in time and blew past the inside rut to allow Joshua to hold onto the position. Forkner ultimately was able to make the pass for fifth on Varize, but it took a few attempts. Jo Shimoda made the pass on Joshua half-a-lap later and then started challenging Forkner and made the pass almost immediately after ripping an inside rut. Justin Cooper made the pass on Mosiman for second place after Michael left the door open. Jo Shimoda continued to charge forward, as he passed Hunter Lawrence for fourth place late in the race. With three laps to go, Jo Shimoda made the pass on Mosiman in front of the mechanics area for third place. As the checkered flag waved, Jett Lawrence snagged another win to go 1-1 on the day and further his points lead. 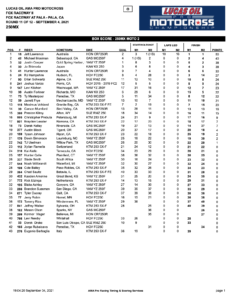 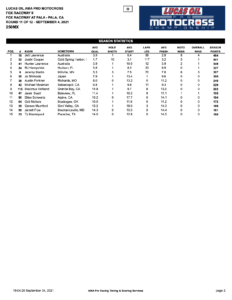 The first 450 moto was off and Ken Roczen was off to the early lead with Cooper Webb just behind. Dylan Ferrandis sat in third, but was pressuring Webb early-on. Max Anstie had a great start, landing his Suzuki in fourth place, just ahead of Tomac. Cooper Webb began to feel pressure from behind, as Ferrandis started to put the hammer down. After trailing and taunting Webb for about a lap, Dylan Ferrandis made the pass for second place. Eli Tomac then made the pass on Anstie for fourth place and started reeling in Webb. Ferrandis caught Roczen and made the pass for the lead almost instantly, as Ken left the inside line open. A few spots back, Christian Craig made the pass on Anstie for fifth place. As moto one rolled into its second half, Eli Tomac seemed to be upping his pace, as he started attacking Webb for third. Eli showed Webb a wheel a few times, but Cooper continued to block the pass attempts. Laps later, Eli Tomac was finally able to make the pass on Webb for third after Cooper got hung-up behind lappers. Up front, Dylan Ferrandis continued to lead with a 8-second lead over Ken Roczen. With less than 2-minutes on the clock, Eli Tomac made the pass on Roczen for second place. Dylan Ferrandis crossed the checkered flag first, taking the first moto win at Fox Raceway.

As the 450 class left the gate for their second moto at Fox Raceway, Cooper Webb was off to the early lead with Roczen and Ferrandis just behind. Ken Roczen pulled alongside Webb on the first lap and challenged for the lead. As they jumped up the hill, Roczen became your new race leader. Dylan Ferrandis then passed Webb for second on the downhill. Ferrandis then went right after Roczen and jumped into the lead before they checked off the first lap. Eli Tomac was charging early, as he made the pass on Craig for fourth place on the second lap. A lap later, Eli Tomac got on the gas early and slid his way around the inside of Webb to make the pass for third. And just another lap later, Eli made the pass on Roczen for second place. A few more fast laps logged by Tomac and he was now on the rear wheel of Dylan Ferrandis, challenging for the lead. Eli jumped to the race lead, as Ferrandis didn’t put up a fight with the championship on his mind. Cooper Webb made the pass on Ken Roczen shortly after the lead change. With 8-minutes on the clock, Christian Craig made the pass on Ken Roczen for fourth place. Max Anstie then made the pass on Roczen with three laps to go. As the checkered flag waved for the final time at Fox Raceway, Eli Tomac snagged the second moto win and the overall victory on the day. Dylan Ferrandis crossed the finish line in second place and ahead of Ken Roczen to claim the 2021 Lucas Oil Pro Motocross 450 Class championship in his rookie season. 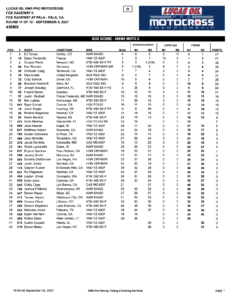 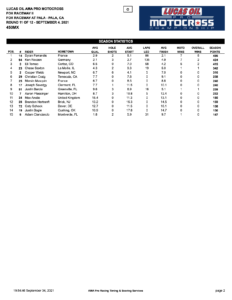 Alex Campbell on the SML Show