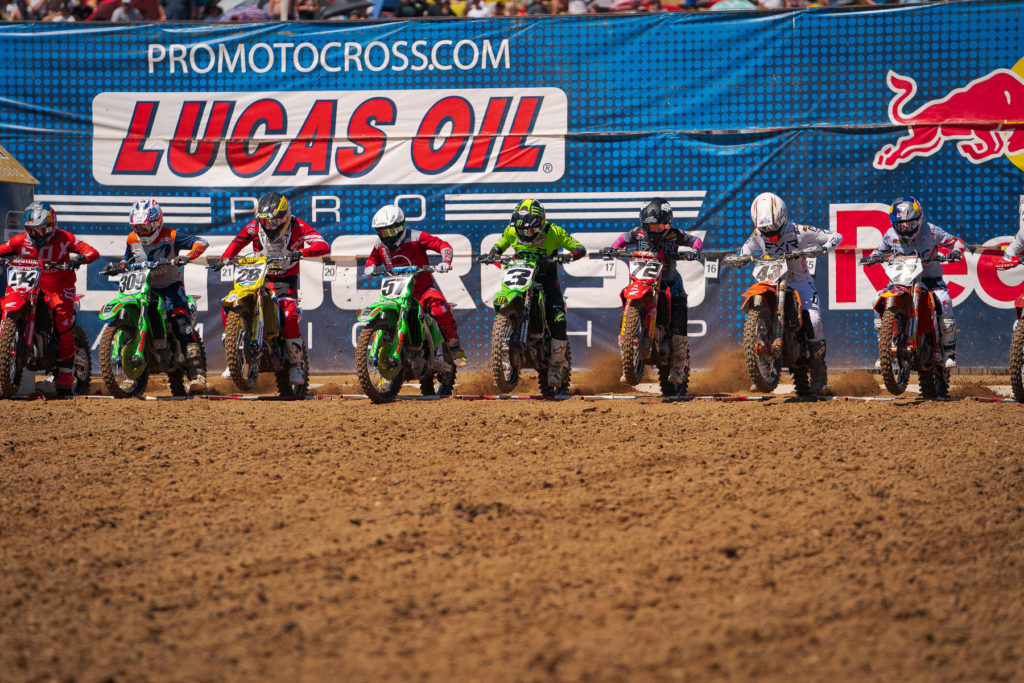 The final round of the 2021 Lucas Oil Pro Motocross Nationals came to an end at Prairie City OHV Park in Sacramento, California, today, and although the premier 450 division championship was decided last weekend, there was plenty of action yet to unfold in today’s four motos. In the 450 division, new National Champion Dylan Ferrandis turned in a pair of spectacular motos to end the season with one final win. In the 250 class, Justin Cooper did what he needed to do by winning both motos, but it wasn’t enough. Even though Jett Lawrence had terrible luck in the form of three different crashes, the young Australian wrapped up his championship with a few points to spare.

When the gate dropped at the start of the first moto of the day, fast qualifier Cooper Webb looked to have the holeshot, but he was sandwiched between Ken Roczen and Dylan Ferrandis in the first turn. Roczen was credited with the holeshot and he led the way on his Honda while all hell broke loose behind him. Christian Craig went from fifth to second in the first three corners and led Ferrandis, Webb, Eli Tomac, and Coty Shock around the track early on. Ferrandis worked past Craig at the start of lap three and set his sights on Roczen, who had pulled away by a couple of seconds. Webb was next to work past Craig, and Tomac followed suit a few corners later.

As the race neared the 10-minute mark, Ferrandis began to creep up to the rear wheel of the leader. A few seconds back, Tomac did the same to Webb and began to challenge for a podium position. Tomac found his way past Webb by sneaking underneath the KTM rider in a fast left-hander, then set out to chase down the lead duo. Once into third, Tomac turned in a blistering lap time that was over a second faster than his rivals’, but the speed bit him and he lost his front end entering a rut and went down long enough for Webb to sneak back by.

As the race wore down, Ferrandis continued to stalk Roczen, but the German held tough until the tricky downhill roller section late in the moto, where the new National Champion found the inside line and went past. One into the point position, Ferrandis pulled away with a commanding lead, showing why he will wear the number-one plate next season.

At the checkered flag, Ferrandis enjoyed a 13-second lead over Roczen, who was comfortably ahead of Webb, Tomac, Craig, Schock, and Brendan Hartranft.

“I think I was able to just have fun on the bike with no pressure,” said Ferrandis. “As a professional, that is not common. I have never won here at Hangtown, so I would like to do that today.” 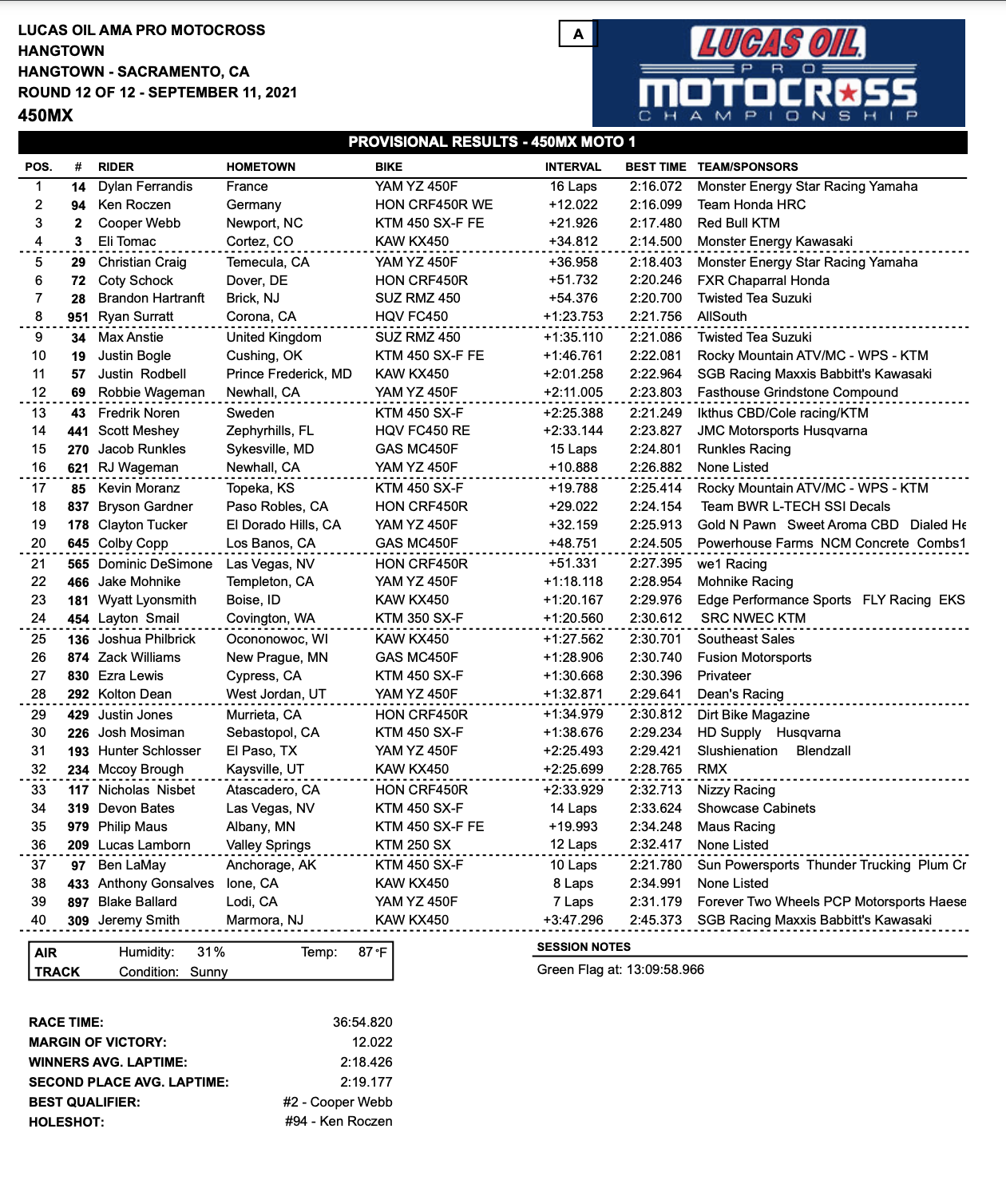 Webb snared the holeshot at the start of the second moto, but new champ Ferrandis was involved in a multi-rider pileup in the first corner. Ferrandis rejoined the race near last, but would set out on a mission to close in on the front of the pack.

Craig passed Webb early on and enjoyed the lead for a bit. Roczen pulled into the mechanic’s area on the first lap and pulled from the track with what appeared to be a foot injury sustained in the first turn mayhem. At the end of the first lap, Craig led Webb, Max Anstie, and Tomac, who was on a charge. Tomac worked past Anstie before the 10-minute mark and took over third behind Webb and Craig, who was riding great up front. Webb began to pressure Craig for the lead soon thereafter, and the KTM rider took control of the lead with a quick inside line. Tomac was next to strike, and the Kawasaki rider bulldogged past on a super-rough downhill. Once into second, Tomac targeted Webb and began to reel in the Supercross Champion. At the halfway point, Tomac had closed to the rear wheel of the leader. Tomac used the same banzai down the downhill to take over the lead, and with that the Kawasaki rider set sail in the point position. Webb held down second to the finish, while Ferrandis completed his amazing come-from-behind ride by working past Craig for third at the finish.

The Frenchman earned the overall win with his 1-3, which topped Tomac’s 4-1 and Webb’s 3-2. Craig, meanwhile, was fourth overall. 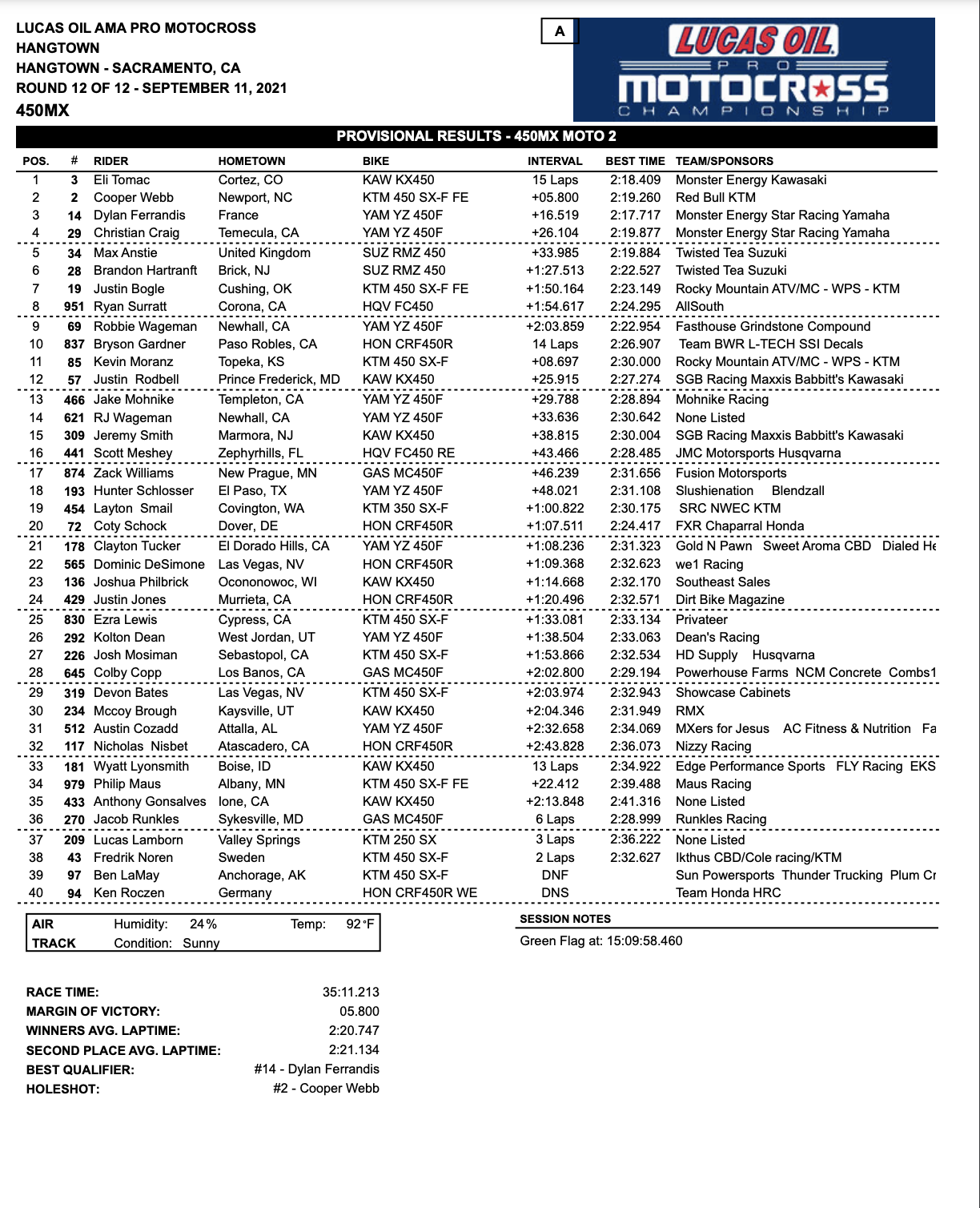 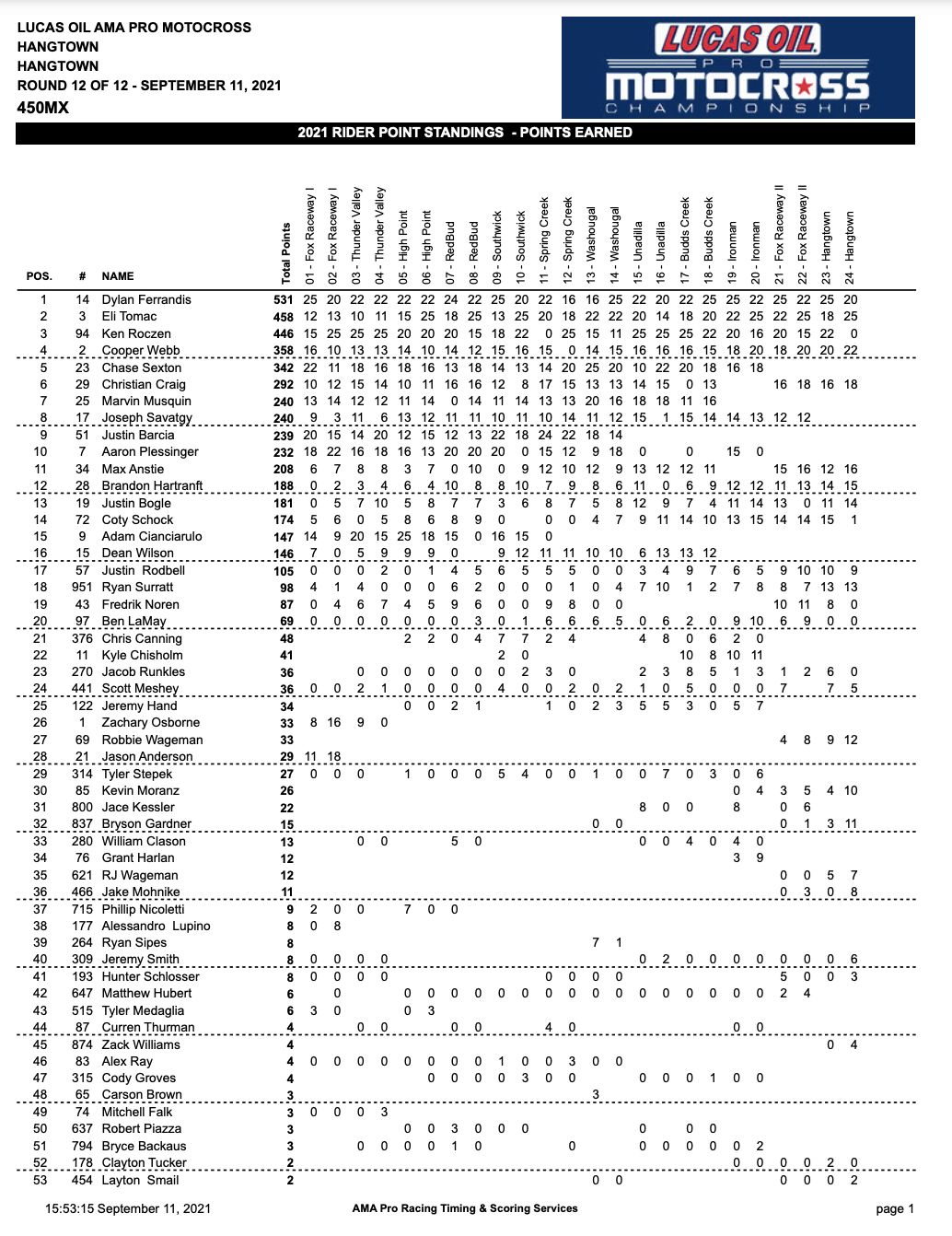 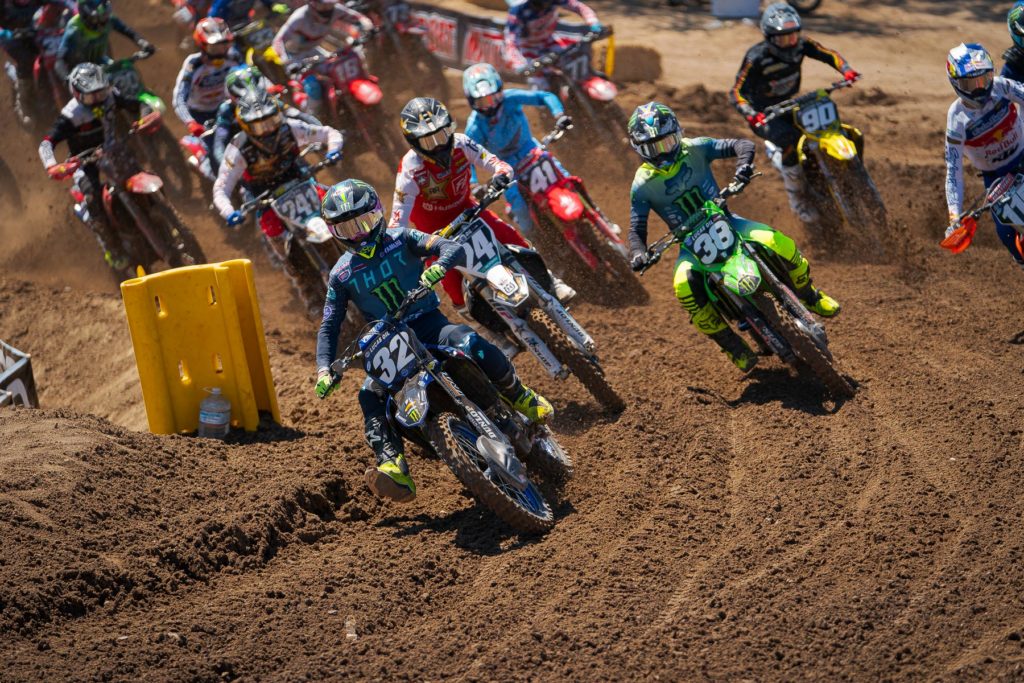 Justin Cooper snagged the holeshot in the first 250 moto and led RJ Hampshire, Austin Forkner, Joshua Varize, and Jett Lawrence onto the track. Lawrence went down in the mud on the opening lap and remounted towards the rear of the pack, sans visor. The situation got even more severe for Lawrence as he tangled with a crashed rider at the end of the downhill roller section and lost even more positions, rejoining the race in 22nd.

Up front, meanwhile, Cooper pulled out a two-second lead over Hampshire and Forkner, while BarX Suzuki rider Dilan Schwartz ran in fourth. Forkner dropped out of the race when his chain appeared to break or derail, allowing Schwartz to move into a podium position.

By the halfway point in the moto, Lawrence had moved up to 11th and well within the points. Cooper continued to hold control of the lead, though Hampshire stayed within striking distance aboard his Husqvarna. Schwartz’s podium run fell apart with less than 10 minutes left as he tangled with Michael Mosiman and crashed back to ninth, which allowed Hunter Lawrence past both riders and into third.

At the checkered flag, Cooper held on to the win comfortably ahead of Hampshire in spite of a last-lap scare in which he pushed the front end across from the mechanics’ area. Hunter Lawrence was third, ahead of Jo Shimoda and Maximus Vohland. Jett Lawrence made a last-lap pass on Jarrett Frye to cross the finish line in eighth, minimizing his points loss to Cooper at 12.

“Man I made some really big mistakes at the end of that race, but I kept it on two wheels and did what I had to do to keep this championship dream alive,” said Cooper. “I can only control my own results, so I will try to win race two.” 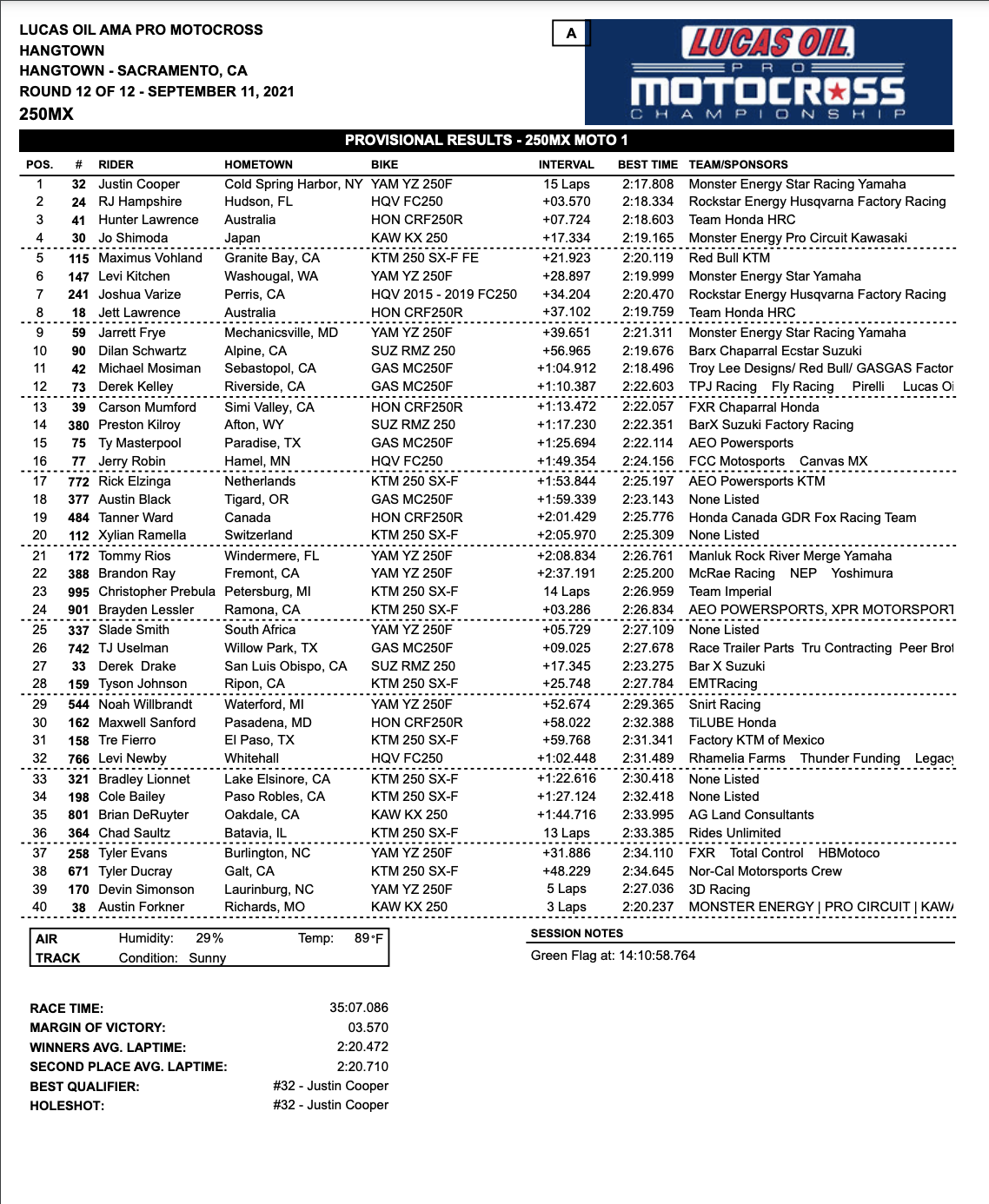 Joshua Varze grabbed the holeshot at the start of the final moto of the season and led Cooper and the rest through turn one. Shimoda and Forkner gave chase in third and fourth, and the drama escalated when Jett Lawrence suffered a mediocre start and was forced to banzai his way through the field. Lawrence came into contact with the rear of Vohland’s bike and went down, dropping to 13th.

Up front, Cooper took control of the lead with a daring pass on Varize and set sail at the front of the pack. Once into the lead, Cooper rode a near-flawless race and controlled the race until the finish line.

All eyes, however, were on the younger Lawrence, who made quick work of his competitors in a quest to work into the top seven, which would be good enough to earn the 250 National Championship should Cooper win the moto. Lawrence first passed his brother Hunter, the Levi Kitchen, Carson Mumford, and Ty Masterpool, en route to the seventh position. Lawrence passed holeshot winner Varize at the half-way point, but he wasn’t done yet. Schwartz and Forkner were next to fall prey to the hard-charging Honda rider, and towards the end of the moto local hero Vohland also gave way to Lawrence. At the checkered flag, Cooper enjoyed a comfortable lead over Shimoda, who ended the day second overall, and Lawrence, who wrapped up his first American championship in dramatic fashion. 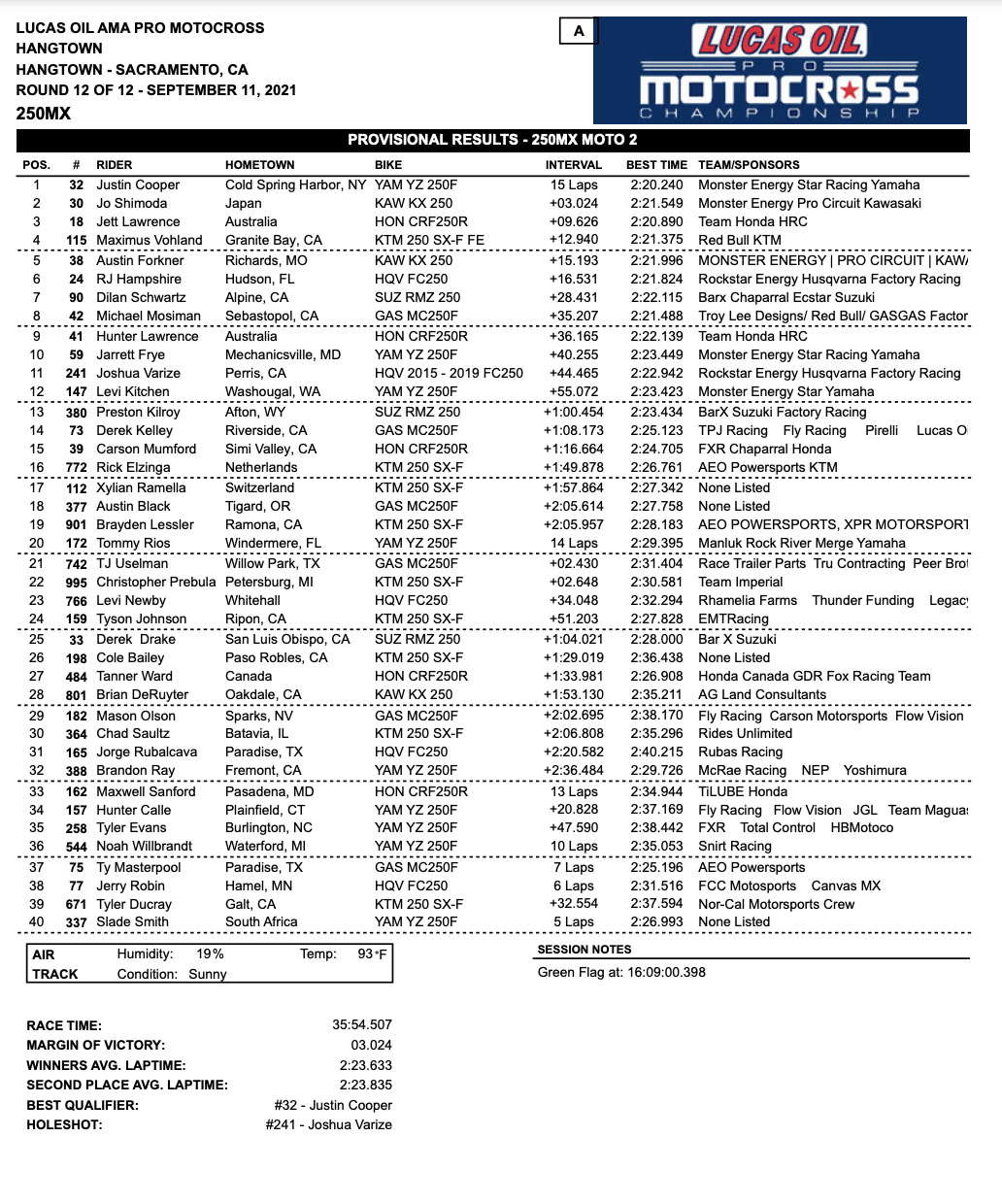 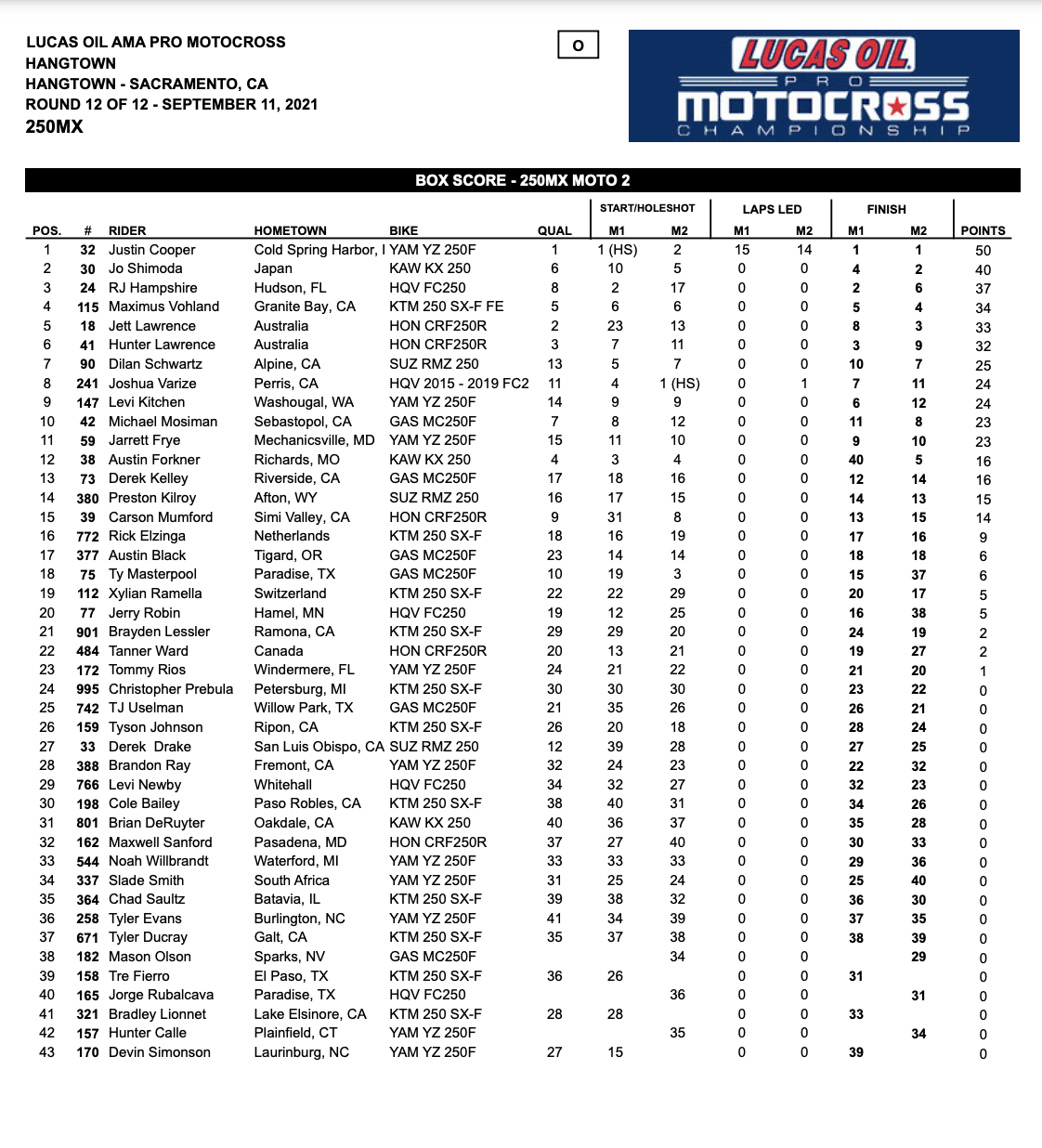 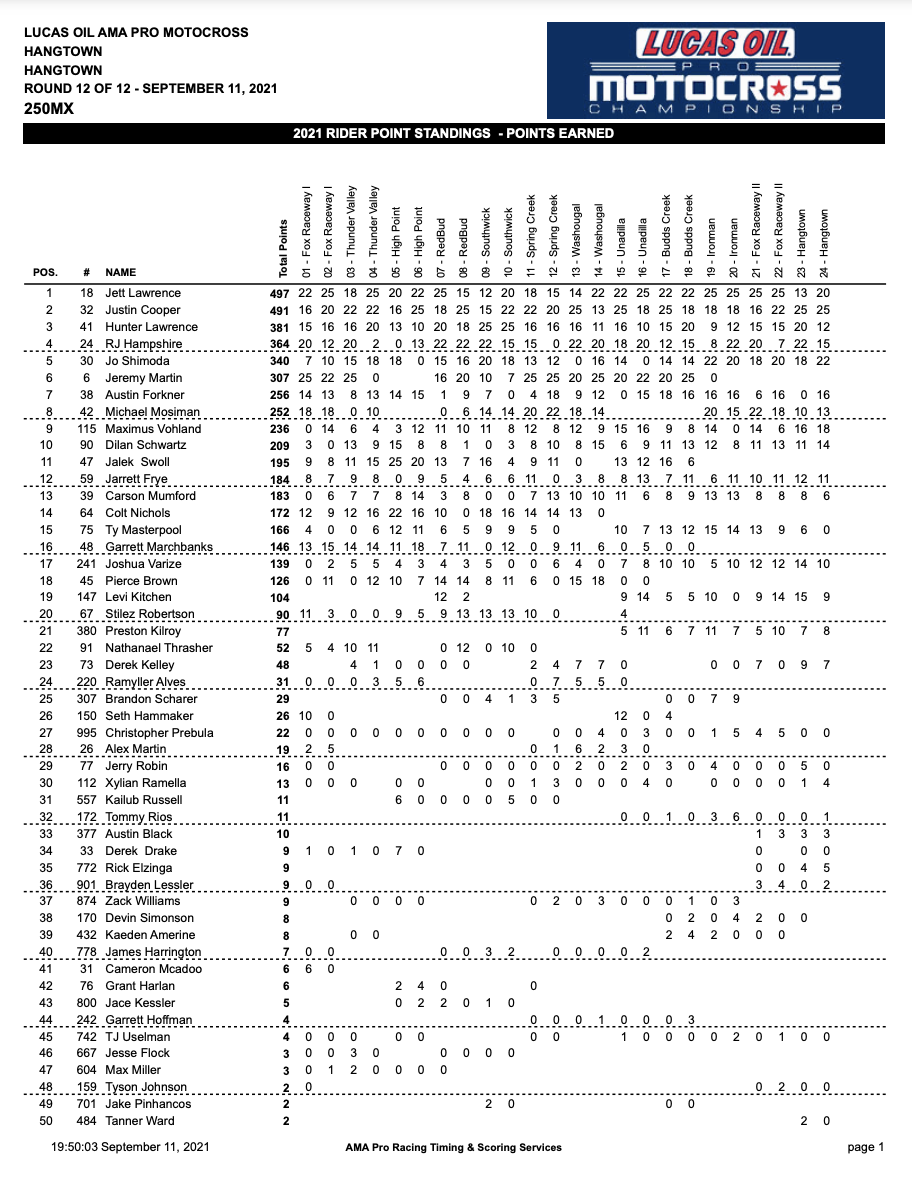