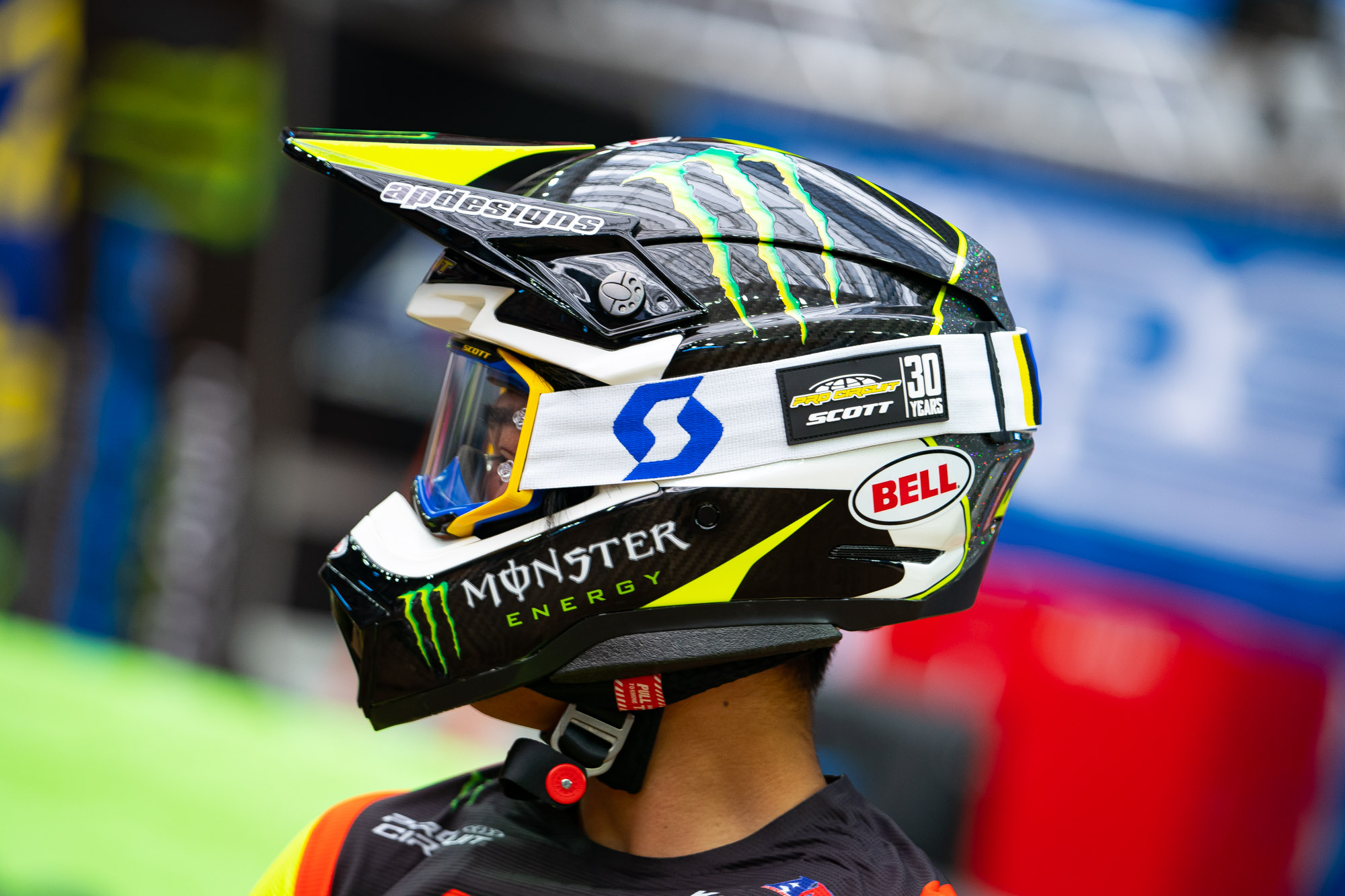 Race day. With all of the training, testing, and anticipation complete, we’re finally ready to start the 2021 Monster Energy Supercross with the 2021 Houston One Supercross. This truly is one of the most talented fields in the history of the sport, something that has been stated countless times over the last few months, and riders will be tested in every way possible over the next seventeen races. They will have to be fast on the track, avoid any sort of injury or issue (a positive test result and resulting isolation period would effectively end any championship hope), and do it multiple times a week as part of the condensed schedule. This season will be a true test of a rider’s skill.

We’ll say it one more time: this is one of the most decorated and well-supported field of competitors in recent memory. The 450 Class entry list is highlighted with factory-backed, championship-winning riders, all of whom believe that this could be their best year every, while the 250 Class is complete with young talent that want to make a mark. As eager as everyone is to get to battle, they know getting through the first round without issue is the key to a championship.

It’s almost impossible to say with confidence who will take the win in either class. The opening round is known for unpredictable finishes and big swings in results, which could certainly be the case again this weekend. Every rider mentioned featured on the entry lists below have experienced the highs and lows of race one, so will they push the pace or will they wait for the right opportunity?

Friday’s press riding session didn’t give us much insight as to what Saturday could bring. The 250 Class riders were a bundle of energy and clicked off very quick laps in both sessions while the 450 Class riders seemed to be more reserved in their actions. We should have a real idea of the competition by the end of the free practice sessions. 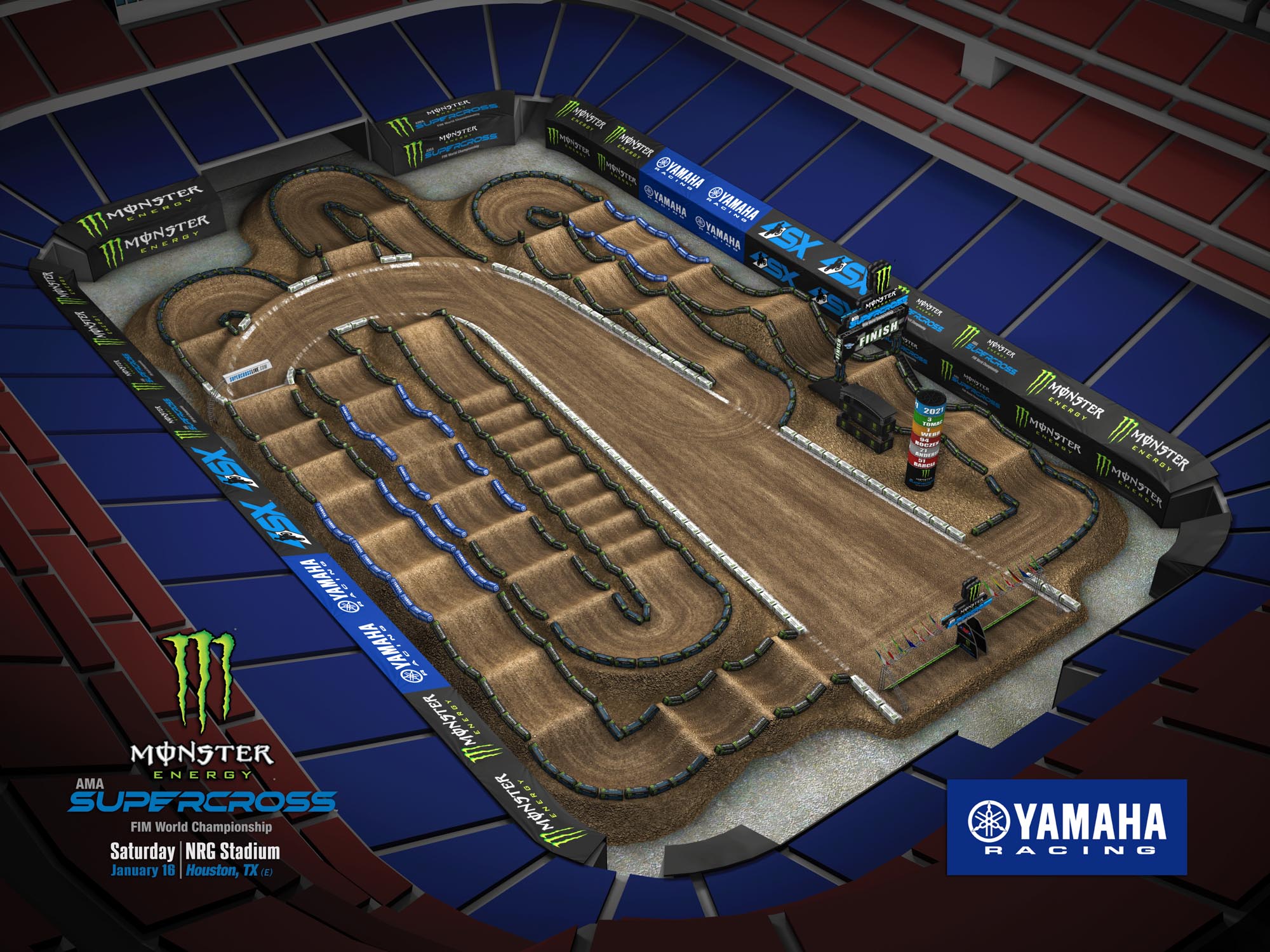 Having the first set of races at NRG Stadium in Houston brings a whole other set of challenges. The rectangular floor is meant for a football team, which means the track design is much different than the baseball diamond we’re used to see at Angels Stadium. Long lanes of obstacles are connected by 180-degree bowl turns, and only two 45-degree left turns, we should see ample passing opportunities.

The first round is usually a mellow build, as no one wants to see a rider claimed on the first day by an unruly section. The shape of the whoops, transitions between the jumps, and obstacles are challenging, for sure, but don’t seem to be too gnarly. There are plenty of options and lines for riders to choose from, especially in the two back-to-back rhythman lanes. Could bring the pack closer together or allow a runaway?

One last thing about the track: the dirt will develop differently throughout the track. We watched holes and ruts get carved into the turns during Friday’s riding session, but saw how slick and hard the clay was in the flatter sections. 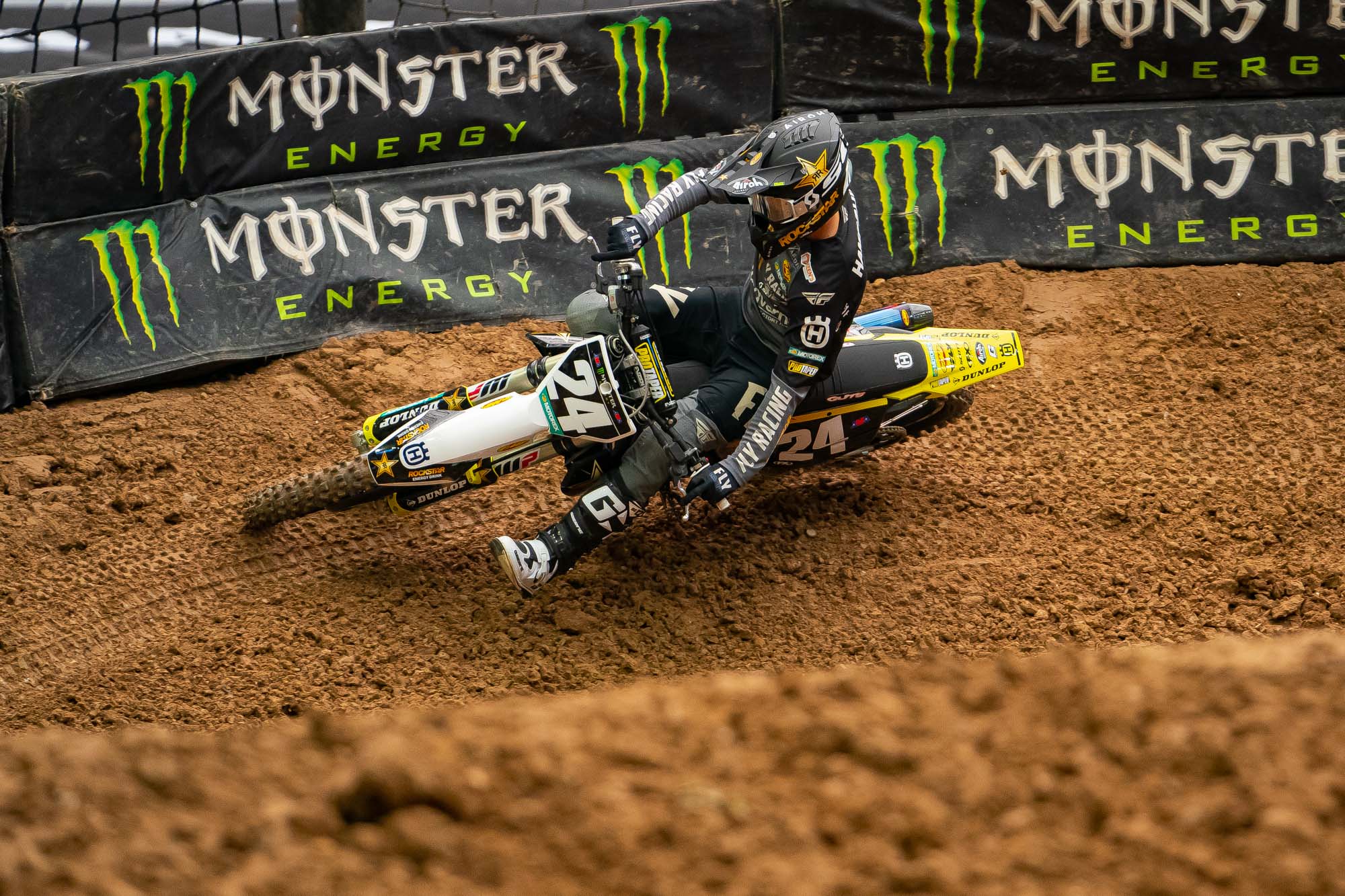 33. Derek Drake | The BAR X/Chaparral/ECSTAR Suzuki is currently recovering from a compound fracture to his femur. He is hopeful to race the 250 West Coast region.

41. Hunter Lawrence | The Team Honda HRC rider spent much of the offseason recovering from a shoulder injury. He will line up in the 250 West Coast region.

45. Pierce Brown | The Troy Lee Designs/Red Bull/GASGAS Factory Racing rider is currently recovering from a knee injury. He will line up in the 250 West Coast region.

52. Luke Clout | The Australian racer has signed with CDR Yamaha in Australia for 2021.

56. Kyle Peters | The Phoenix Honda rider is currently competing in the Kicker Arenacross series. He is set to line up for the 250 West Coast region.

58. Jacob Hayes | A badly broken femur and complicated recovery will keep Hayes from lining up in the near future.

62. Mason Gonzales | A broken ankle and lower leg will sideline Gonzales for the start of the season.

66. Jordan Bailey | The rider split from TiLube Honda and will compete in the 250 West Coast region as a privateer.

71. Killian Auberson | The Swiss rider suffered a career-ending injury in 2020. You can donate to his Road2Recovery fund by clicking this link.

80. Jordon Smith | The Monster Energy/Pro Circuit/Kawasaki rider is recovering from a wrist-hand injury. He will line up in the 250 West Coast region. 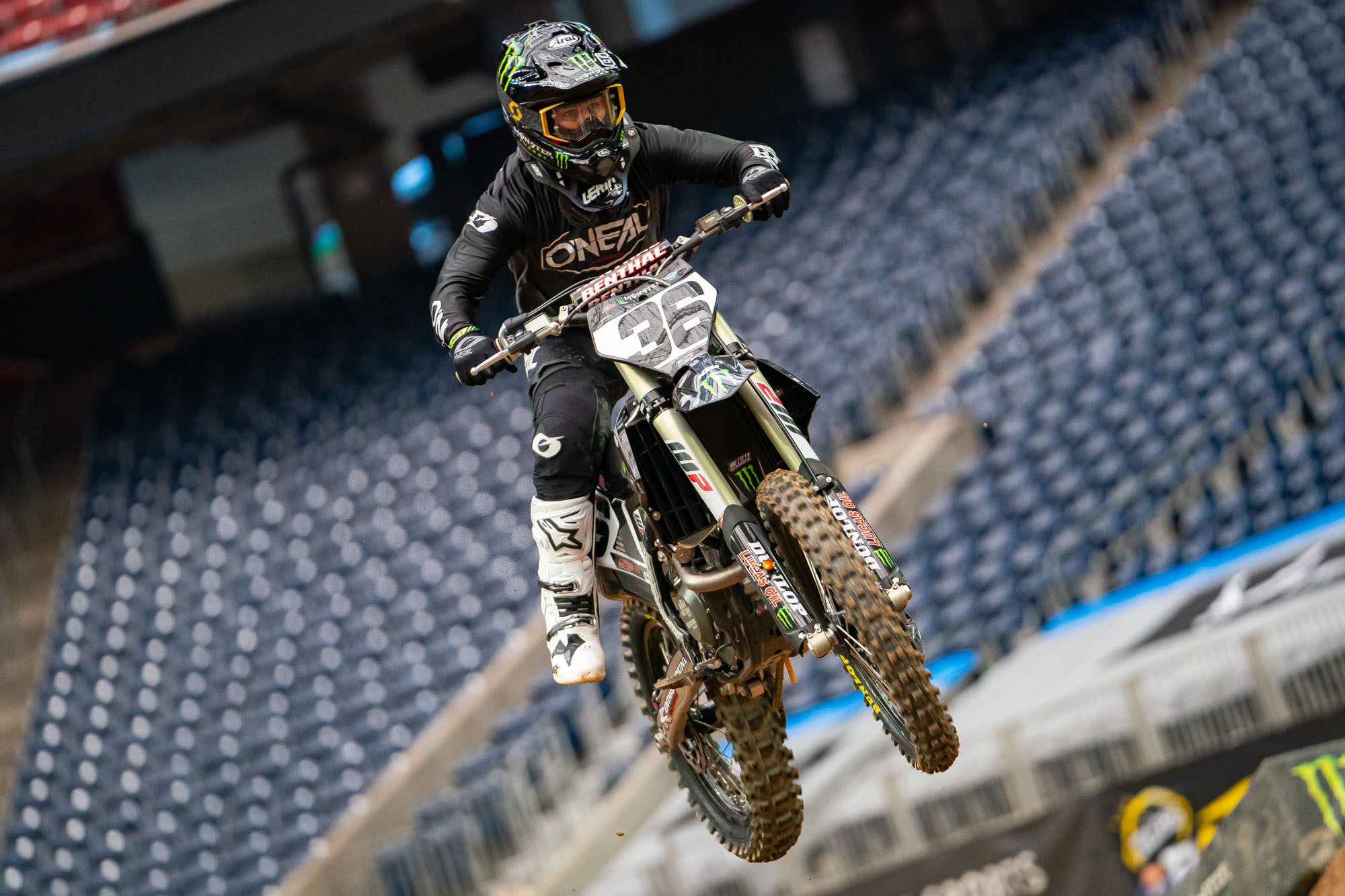 12. Shane McElrath | The SmarTop/Bullfrog Spas/MotoConcepts/Honda rider will miss the opening round due to a Grade Three AC separation. A return date has not been established.

34. Max Anstie | The Twisted Tea/HEP Motorsports/Suzuki rider had a hard crash during his last day of preseason practice. Anstie will miss the first rounds of the season with a back injury.

44. Tyler Bowers | The privateer will miss the first six rounds of 2021 after a recent change in sponsorship funding. 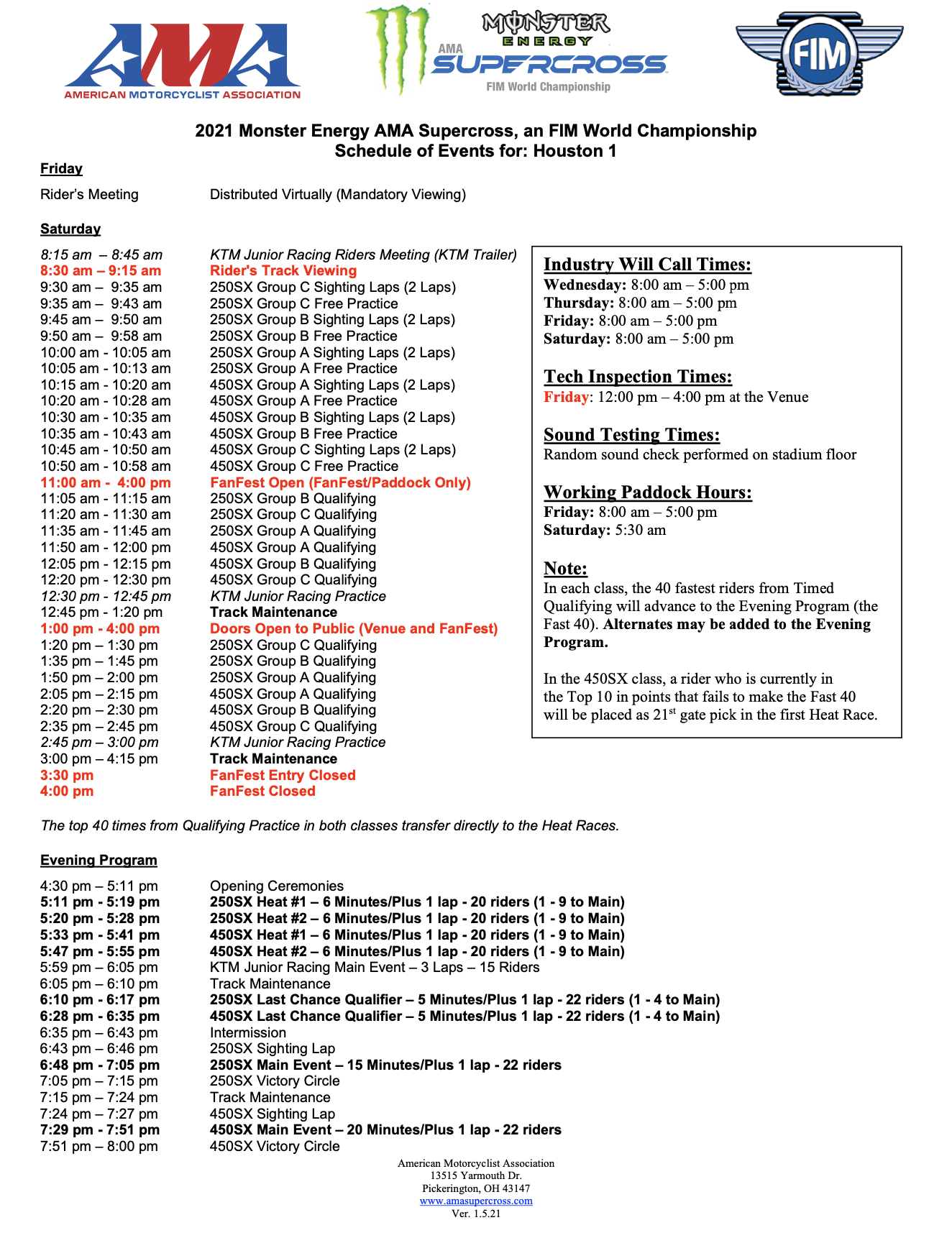