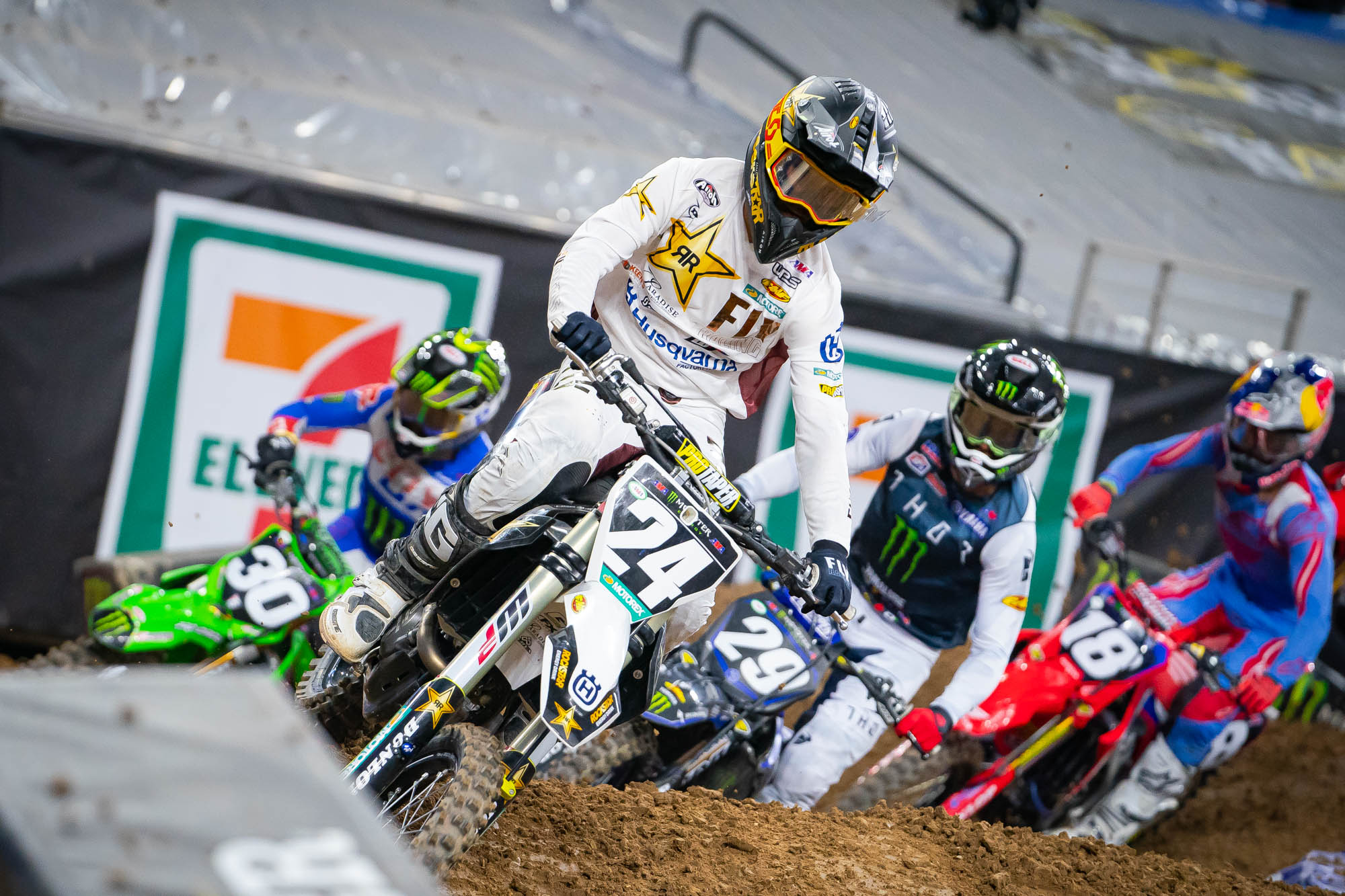 And the first race of the 2021 Monster Energy Supercross season was off, as Jo Shimoda lead 250 heat into the first corner with privateer Lane Shaw behind. As Shimoda began to gap the field early on, Max Vohland and Jett Lawrence passed into third and fourth. Lawrence then made the pass on Vohland and moved into second place, as Forkner entered the top three. As Jo continued to lead, Austin Forkner began chase to Jett Lawrence in second place. Forkner had a close one, as he cased in the rhythm lane but managed to save it and then make the pass on Lawrence in the following section. Jett Lawrence then stalled his bike and gave up a spot to Vohland before getting his Honda restarted. As the heat race neared an end, Forkner closed in on teammate Jo Shimoda and began challenging for the lead. Forkner pulled alongside Shimoda with two laps to go and got a better run through the whoops to give him the lead. Behind the PC Kawasaki’s, Lawrence re-passed Vohland for third place on the final lap. As the checkered flag waved, Forker took the heat race win with Jo Shimoda just behind.

As the second heat in Houston left the gate, RJ Hampshire was off to the early lead but Christian Craig quickly made the pass on RJ and set his sights on a clear track. Just behind, Michael Mosiman made the pass on Mitchell Oldenburg for third place. Craig tipped over while re-entering the start straight, allowing Hampshire to re-gain the lead. However, just a few laps later, Christian Craig was trailing and challenging for the lead again. Meanwhile, Colt Nichols passed into fourth place and began reeling in Mosiman. Back up front, Craig continued to pressure Hampshire and finally dove to the inside of the Husqvarna rider to take over the lead. A lap later, Hampshire nearly lost it while going nose-down after wheel tapping in the rhythm, luckily he was able to save it. When the checkered flag came out, it was Christian Craig taking the win in heat two.

As the 250 last chance qualifier left the gate, Simonson was off to the early lead, but Max Miller took Simonson wide and out after the finish line to take over the lead. Two more riders in the top-5 get caught up in the chaos and go down. Woodcock then passed Miller for the lead, but Max Miller wasn’t giving in as he continued to apply pressure. Osby made the pass on Saultz for the final transfer position. Hand then made a pass on Miller for second place, and then began working on Woodcock and the lead. With two to go, Osby had caught up to the leaders, who were in their own battle. However, they ran out of time as Woodcock held on and took the LCQ win.

As the first 250 main event of the year left the gate, RJ Hampshire was off to the early lead with Christian Craig and Jo Shimoda just behind. Jett Lawrence quickly made a pass on Shimoda for third, which left Shimoda to battle with his teammate Forkner. Up front, Christian Craig made an early pass on Hampshire and took the lead. Christian clipped a tough block after drifting wide and nearly went down, but was able to hold onto both his bike and the lead. Behind the leaders, Austin Forkner began pressuring Jett Lawrence for third place. While battling for third, the pair of riders upped the pace and reeled in Hampshire. Colt Nichols then caught up to Forkner and made the battle for second four riders deep. Lawrence then caught a shift a little late in the flats, allowing Forkner to make the pass for third place. Nichols then made the move on Jett after diving to the inside after the finish line. Up front, Forkner was on Hampshires rear tire and challenging for the second place position. Forkner darted through the whoops and to the inside of Hampshire to take over second place. Colt Nichols was now the rider challenging Hampshire, as the two battled for third place. However, Jett Lawrence then entered the picture, as he challenged Nichols. Behind this battle, Jo Shimoda pressured Michael Mosiman for sixth place, but Mosiman then got together with a lapper and went down. Meanwhile, Hampshire continued to fend off Nichols and Lawrence for third place. Colt dove to the inside of Hampshire, but was unable to make the pass, however, RJ went down by himself at the end of that section and gave up two positions. Jett Lawrence went down on the final lap while battling with Colt. As the checkered flag waved, Christian Craig took the win at the series opener in dominating fashion. 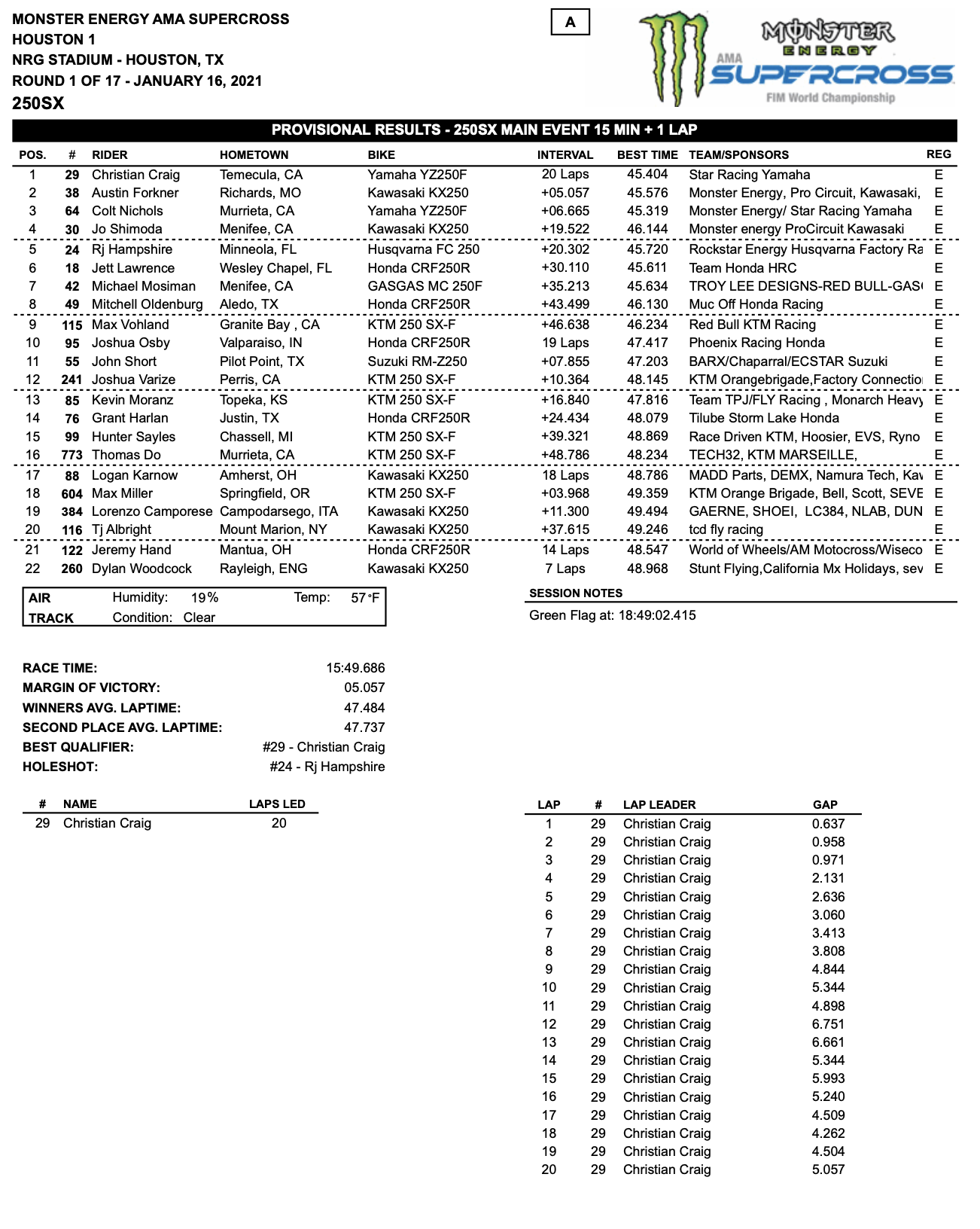 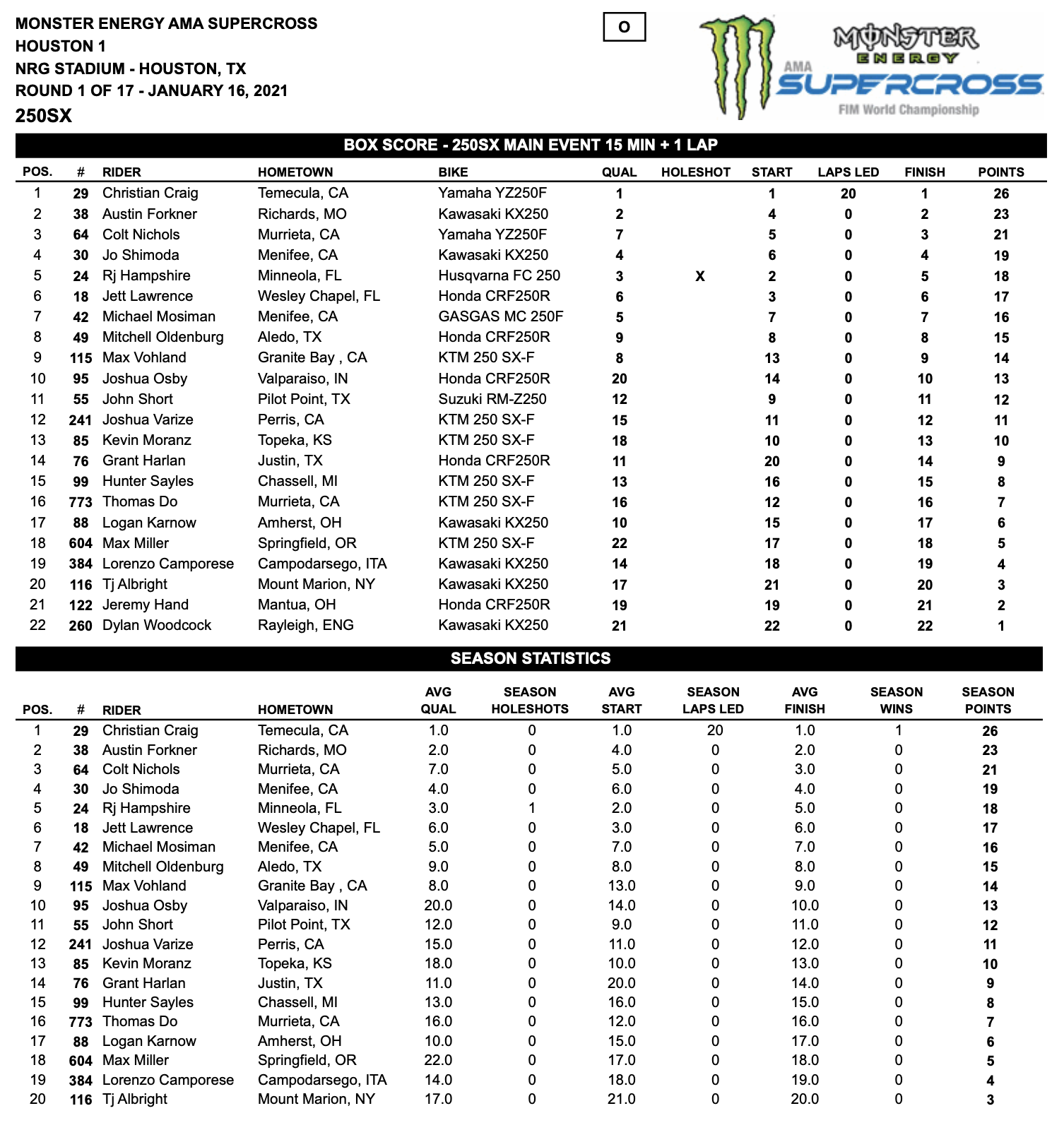 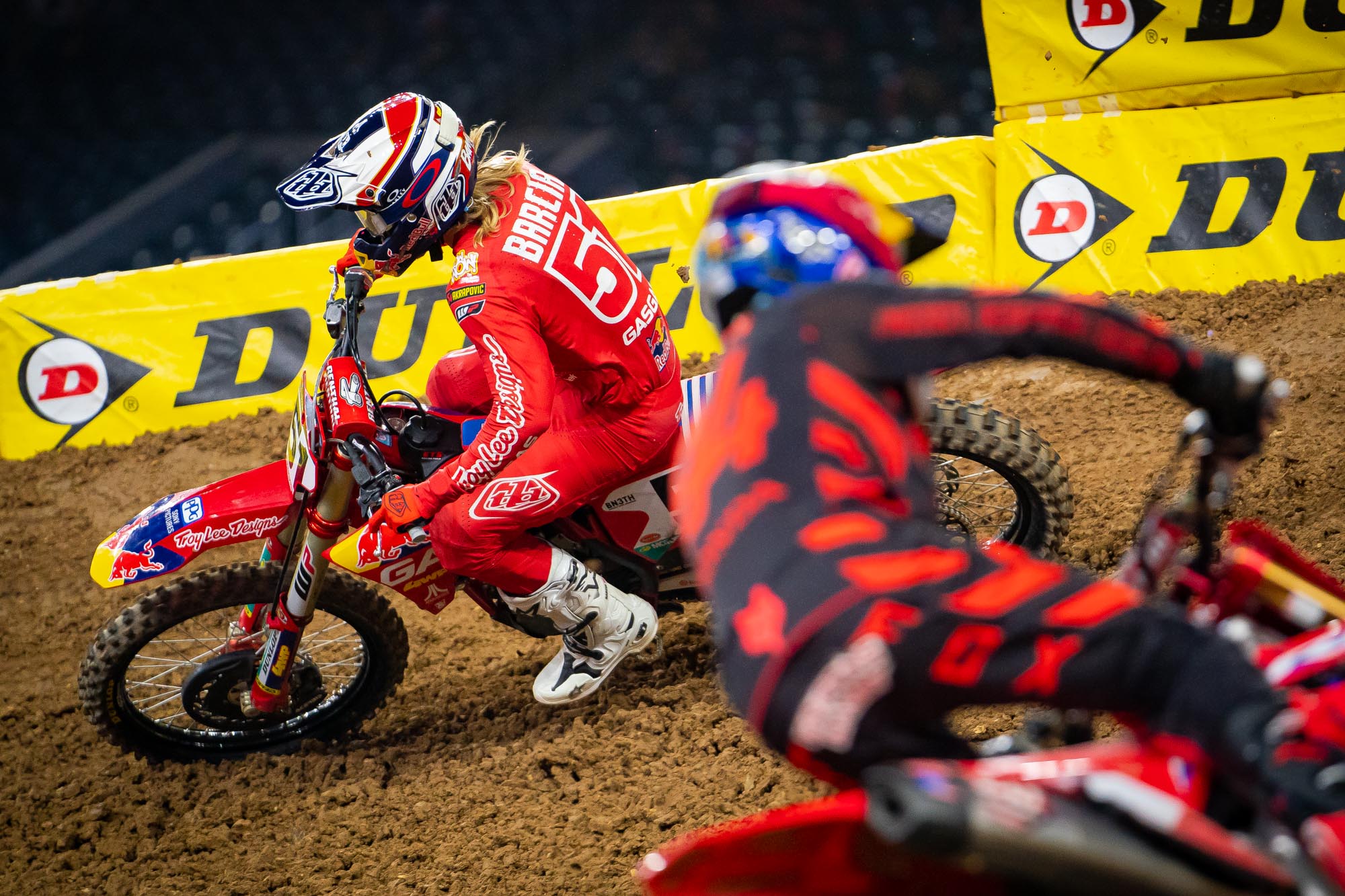 As 450 Heat One left the gate, Justin Barcia was off to the early lead with Adam Cianciarulo right alongside. Ken Roczen quickly shuffled into third place and then passed Adam Cianciarulo for second place. Roczen then immediately began challenging Barcia for the lead, but Justin was able to hold him off for the time being. Meanwhile, Eli Tomac continued making passes behind the lead group, as he got around Wilson for fifth. Barcia pulled a quad after the finish line and jumped over the entire on-off in an attempt to gap Roczen. Eli Tomac then finally got around Justin Brayton for the fourth place position. On the final lap, Roczen attempted to follow Barcia over the quad and cased it, fortunately, he stayed on two wheels, but lost some time. Justin Barcia took the heat race win after an impressive ride.

As the final heat race left the gate, Brandon Hartranft was off to the early lead, but Cooper Webb quickly passed for the lead. Aaron Plessinger then made the move on Hartranft for second place, and Osborne followed. Marvin Musquin then began challenging Osborne for third place, as Malcolm Stewart closed in on the pair. Stewart then jumped to the inside of Musquin, but Marvin fired back immediately and retook the position. A corner later, Malcolm Stewart secured the position over Musquin and began charging towards Osborne. Back up front, Plessinger closed in on Cooper Webb and began challenging for the lead. However, Plessinger then began receiving pressure from Osborne, and just like that the top three were in the same corner at the same time. Zach Osborne then capitalized on a small mistake from Plessinger and took second place. Stewart then closed in on his teammate and made the pass on Plessinger shortly after. Osborne rocketed around the outside of Webb and took over the lead late in the race. Chase Sexton passed into the top-5 as he moved pass Plessinger for fourth place. As the checkered flag waved, Zach Osborne took the heat race win.

Cros was off to the early lead as the 450 LCQ left the gate. The Suzuki teammates Brandon Hartranft and Adam Enticknap followed behind, but Chisholm quickly got by Adam. Hartranft then tripled out of a rhythm and into the lead, but just a lap later Chisholm took Brandon wide in the same corner and entered the lead. Meanwhile, Alex Ray passed into fourth place, securing the final transfer position. Alex Ray then reeled in Enticknap and began challenging for third place, but was unable to make the pass. As the checkered flag waved, Chisholm took the LCQ win and the top four went on to the main event.

The gate was down and the 450 main event was off, as Marvin Musquin was off to the early lead, but not for long, as Justin Barcia quickly passed for the lead. Justin Brayton then made a pass on Musquin for second place, as Cianciarulo trailed in fourth. As Roczen started pressuring Cianciarulo, Adam upped the pace and made the pass on Marvin for third. Roczen followed by Marvin, and then almost immediately rocketed by Cianciarulo for third place. Chase Sexton and Martin Davalos got together and went down. Back up front, Ken Roczen made the pass on Brayton for second place in the same spot he had passed Cianciarulo a lap before. Vince Friese and Eli Tomac went down after Eli tried to make the pass on the inside, taking them both down and dropping them outside of the top-10. Back up front, the race mirrored heat one earlier in the day, as Barcia led Roczen, but not by much. Ken Roczen showed Barcia his front wheel a few times, but Barcia continued to lead as the clock ticked toward 10-minutes. A few positions back, Malcolm Stewart made the pass on Brayton for fifth place. Marvin Musquin and Adam Cianciarulo swapped lines a few times, as they battled for third place. Marvin Musquin eventually completed the pass on Cianciarulo for the spot. Vince Friese and Eli Tomac got together again, and it appeared that Tomac took both himself and Friese off of the track. As the race continued to near its end, Ken Roczen began applying more and more pressure. However, each shot Roczen took at Barcia and the lead, Justin responded with more throttle and ran away. The two continued to play cat and mouse, but Justin Barcia upped the pace and was able to hold onto the lead. And just like that, Justin Barcia took the season opener win in Houston and snagged GasGas their first win in Supercross. 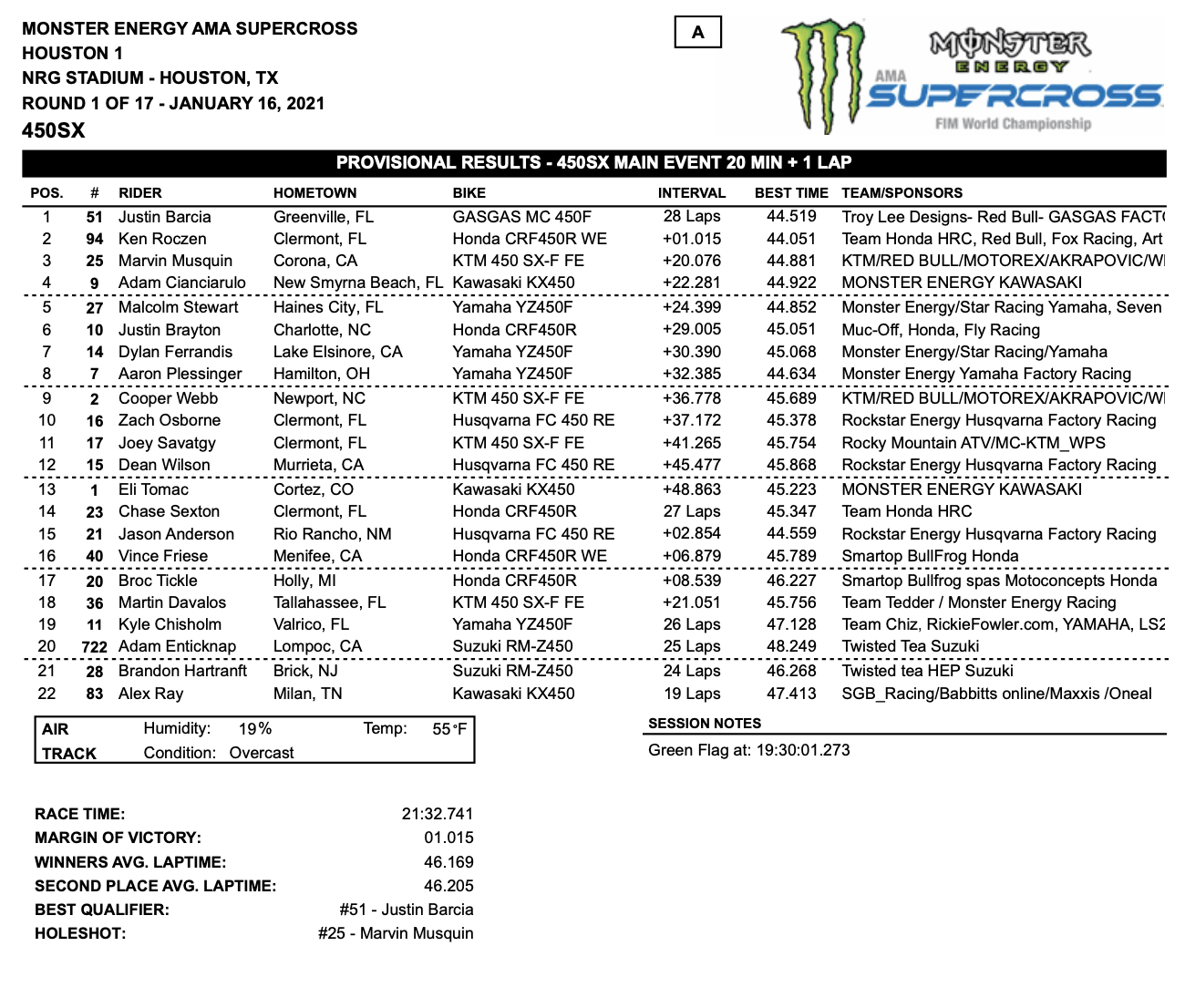 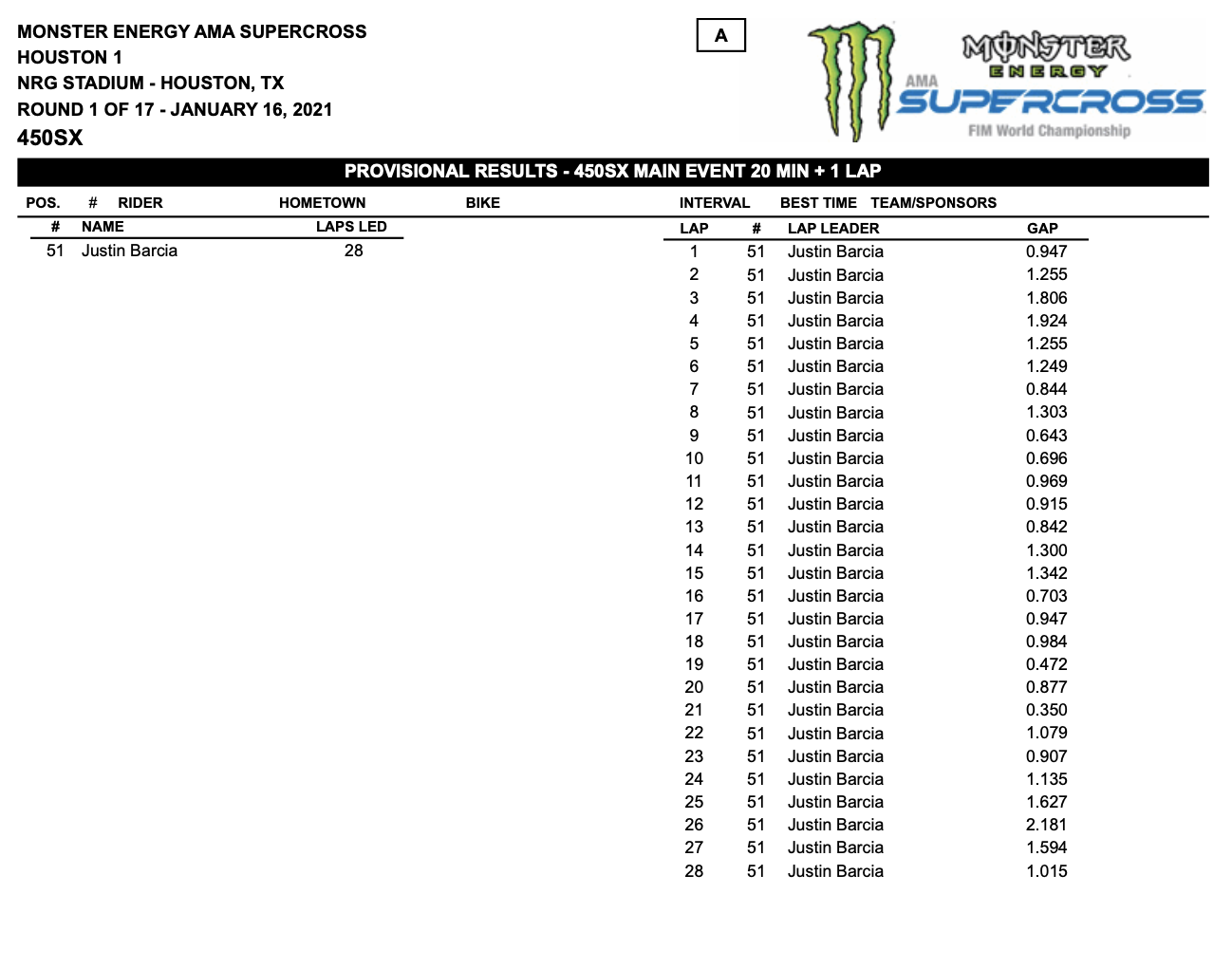 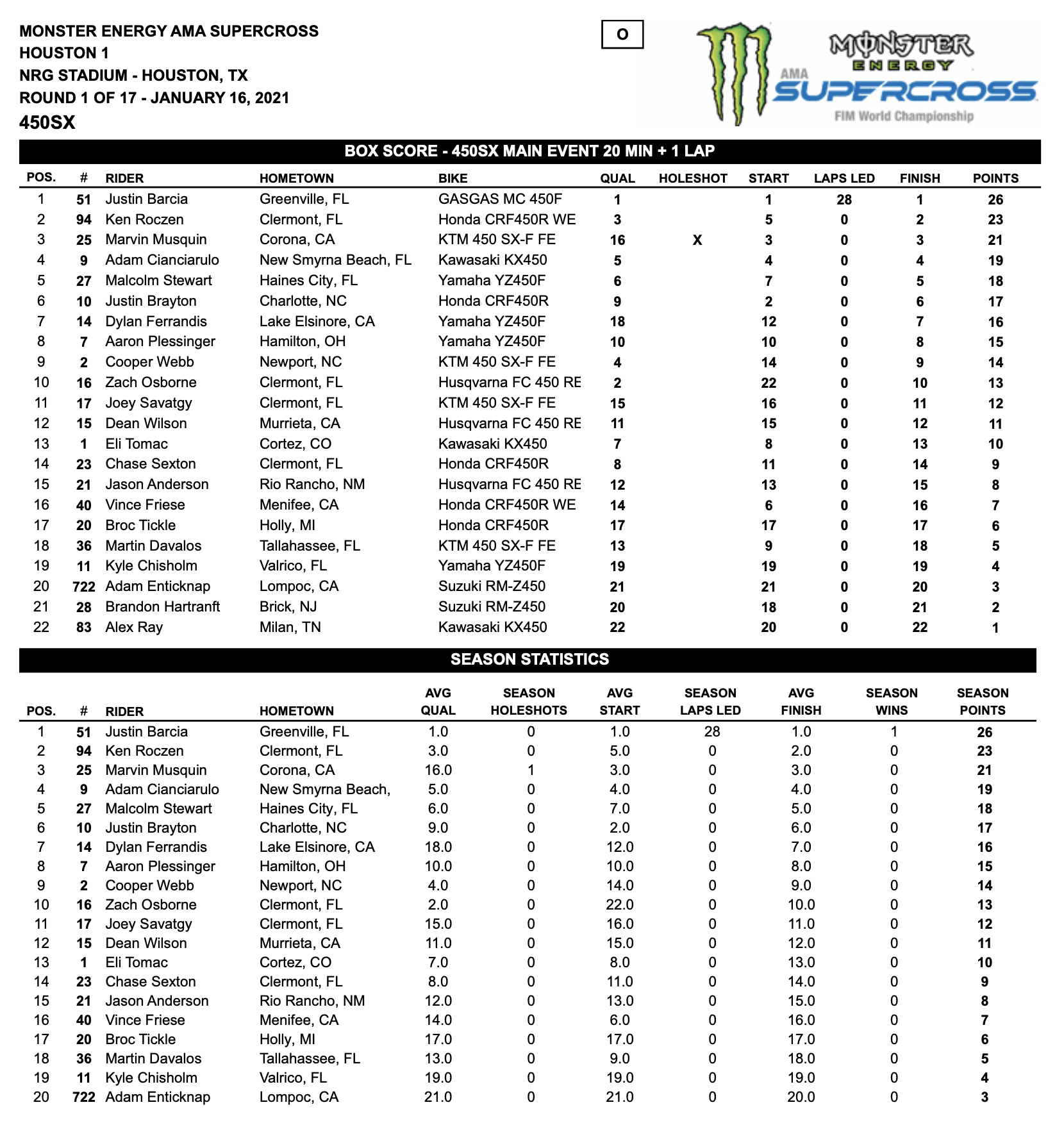