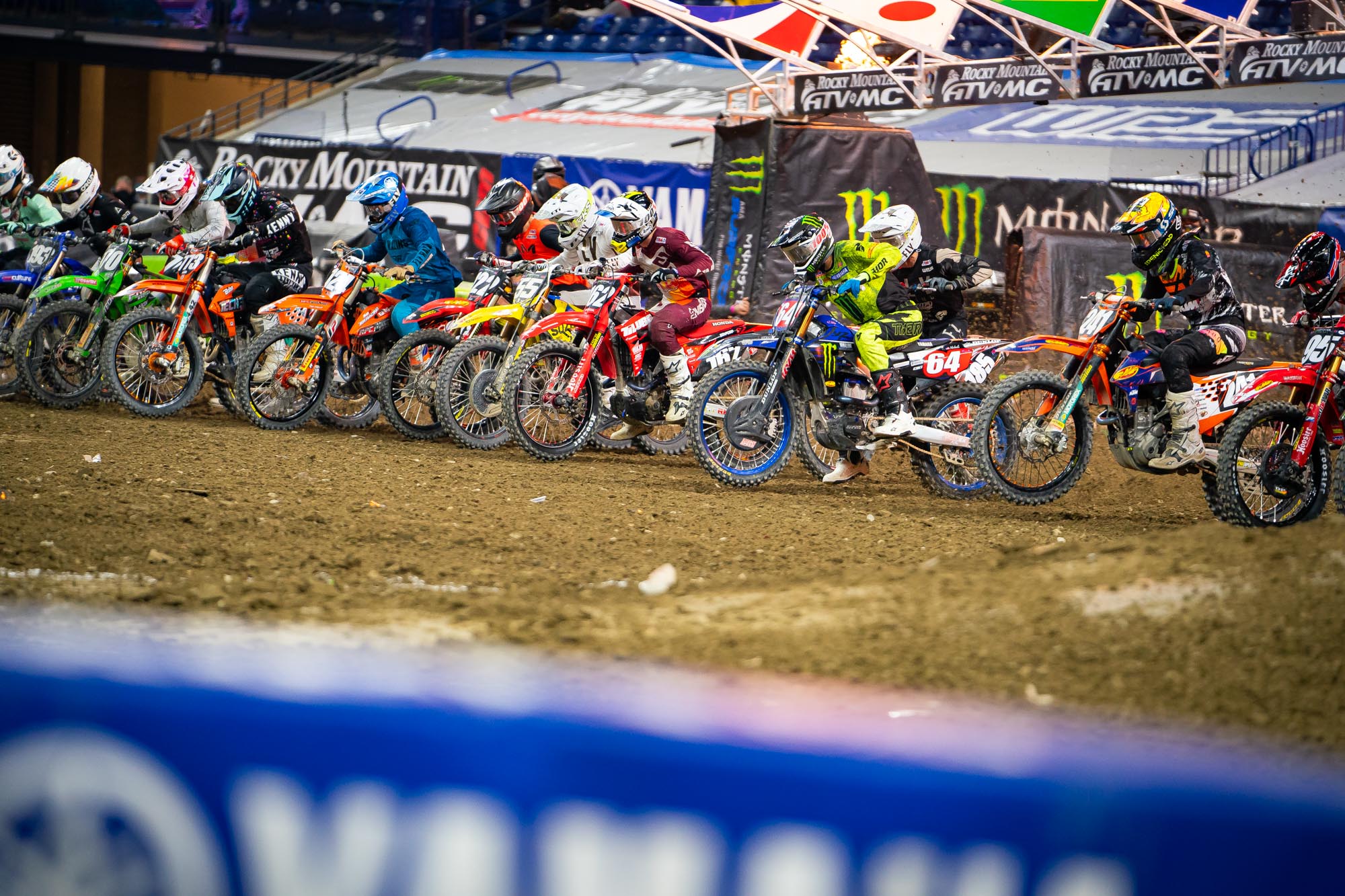 That was incredible. The 2021 Indianapolis One Supercross was another excellent night of racing, complete with new winners and championship implications, all of which made the fourth round of the 2021 Monster Energy Supercross Series an instant classic. Give the report and photos from the 250 East Coast region and 450 Class a look, then circle back over the next few days for even more content from the Indiana events.

As the first race in Indianapolis left the gate, Mitchell Oldenburg was off to the early lead with Josh Osby alongside. Christian Craig trailed the Honda riders in third place, but managed to make the move on Osby after the first lap. Colt Nichols began making passes toward the front, as he moved into fourth place. Christain then began to reel in Oldenburg and made the pass for the lead with two minutes on the clock. Colt Nichols then followed his teammate past Oldenburg, as he moved into second place. On the final lap, Colt closed in on his teammate but wasn’t able to make the pass before Christain Craig took the checkered flag and the heat race win.

As 250 heat two left the gate, Jett Lawrence was off to the early lead with Michael Mosiman just behind. Mosiman wasted no time, as he took Lawrence wide and out to take over the lead. Jo Shimoda was running in second place, but made a mistake that dropped him to ninth place. Meanwhile, Lawrence already made his way up to fourth place after hitting the deck on the first lap and continued to make passes. As the clock ticked under a minute, Jett Lawrence had already passed back up into second place. However, It was Michael Mosiman who crossed the checkered flag first and picked up his first heat race win of the year.

When the 250 LCQ left the gate, Schlosser was off to the early lead with Comporese trailing in second place. Harlan was making moves early on, as he passed into third place and immediately began working on second place. Harlan then made the move for second and quickly passed Schlosser for the lead. As the checkered flag waved, Harlan took the LCQ win and moved onto the main event.

As the 250 Main Event left the gate, Colt Nichols was off to the early lead after rocketing down the start straight. Christain Craig ran just behind his teammate with Mosiman trailing in third. Meanwhile, Jett Lawrence sat outside of the top-5 but was climbing through the pack. However, just a few laps into the main, Jett then ran into the back of another rider going up the wall and came to a stop, dropping him to 12th. Back up front, Colt continued to lead with a two-second lead on Craig. Jett Lawrence made the move on Oldenburg for fifth place and started working towards Shimoda in fourth. With three minutes on the clock, Lawrence had caught up to Shimoda and began challenging for the spot. After a few laps of trailing Shimoda, Lawrence made the pass for fourth place and then immediately made the move on Mosiman for third place. Lawrence continued to charge and caught up to Craig on the final lap. Lawrence jumped alongside through the rhythm lane and then went outside of Craig going into the whoops, but both Craig and Lawrence went wide and off of the track after connection. The pair tipped over in the tuff blocks; Lawrence was the first to get up and recover but the incident still cost him a spot as Mosiman and Shimoda got back around. Meanwhile, Colt Nichols took the main event win in dominating fashion. 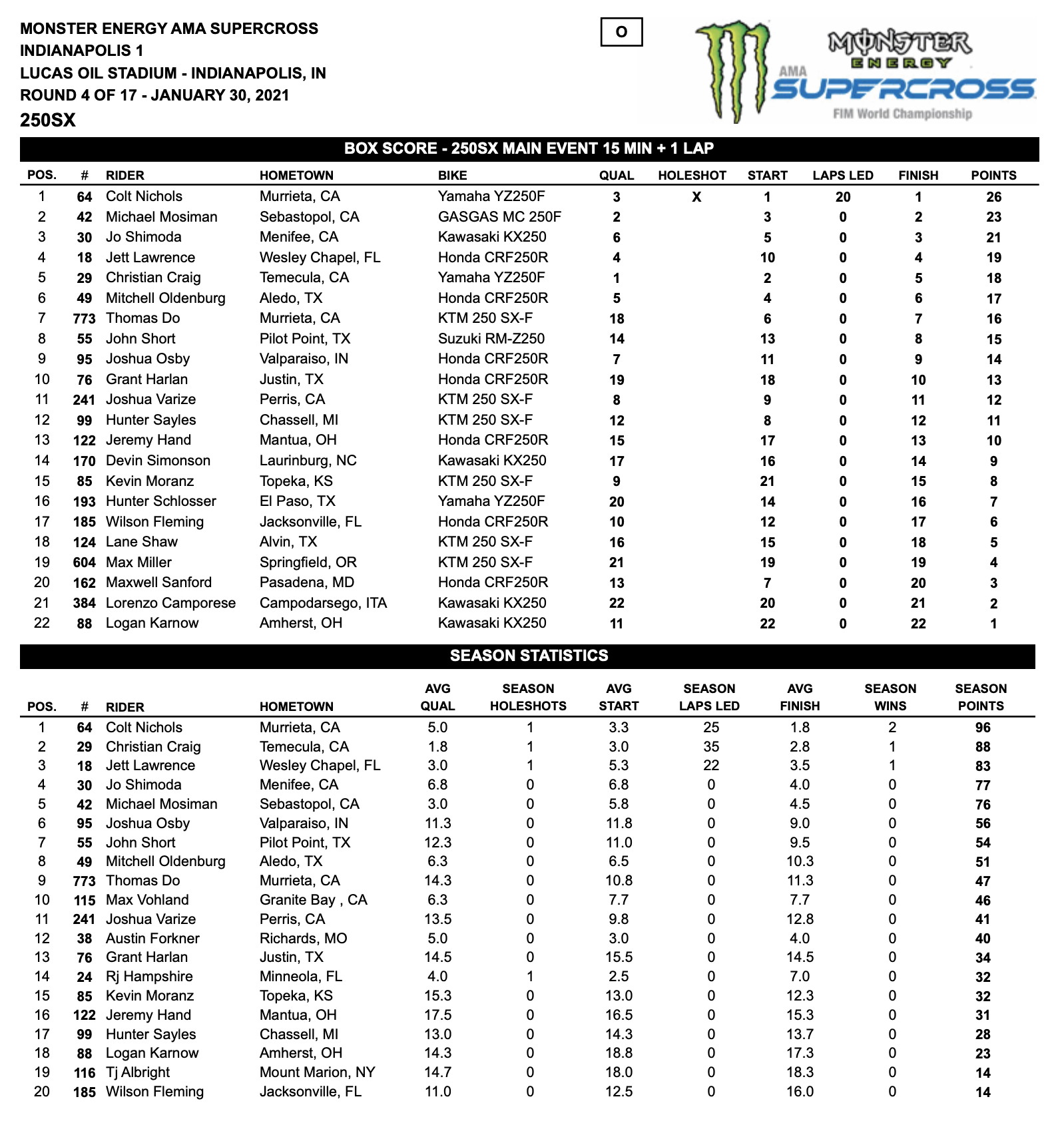 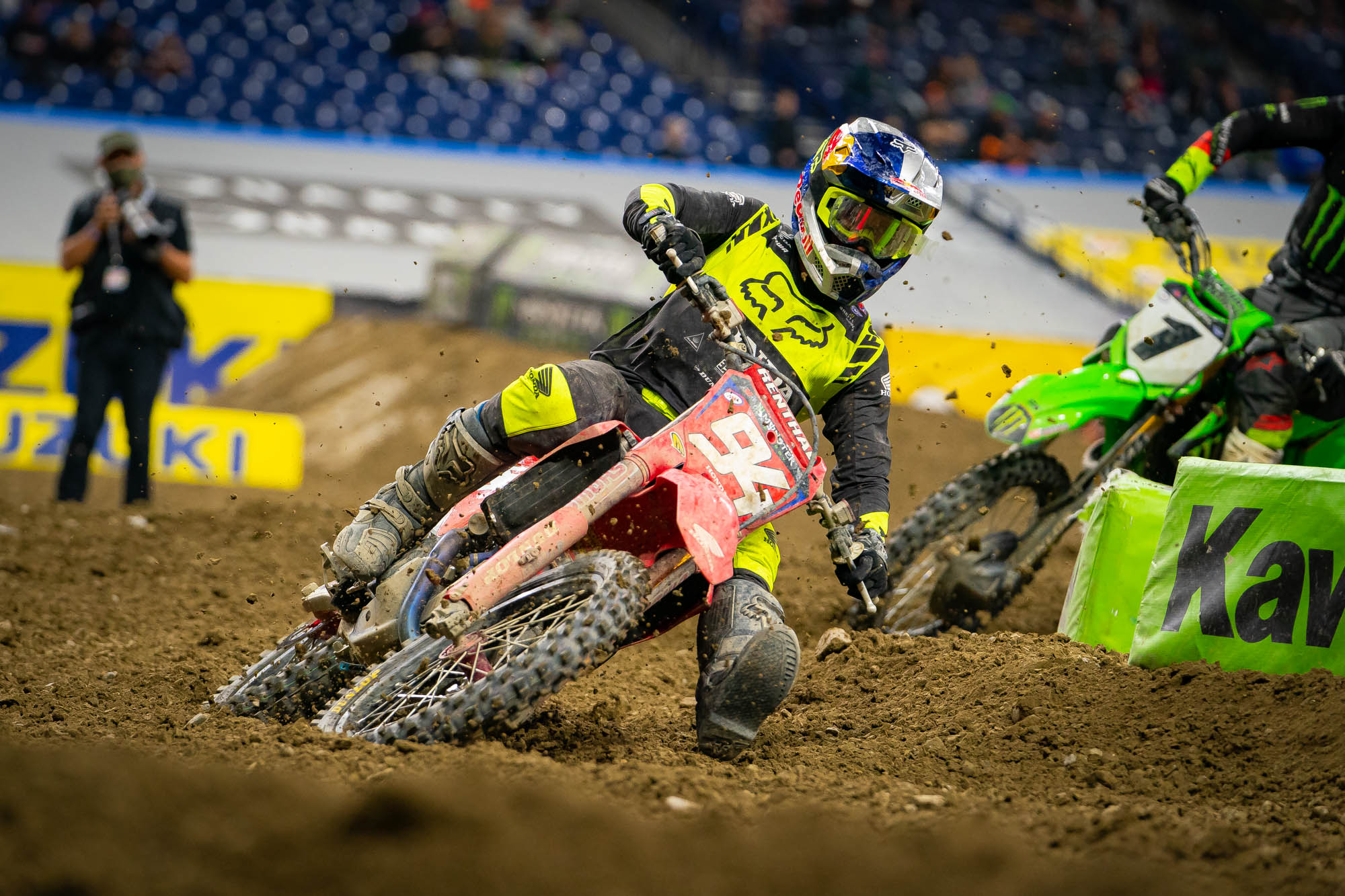 As the first 450 race of the night took off, Marvin Musquin was off to the early lead, but Adam Cianciarulo dove inside and took over the top spot. Malcolm Stewart trailed Cooper Webb, who was chasing down Musquin. Vince Friese went down hard on the double that jumped over the start, which collected Alex Ray. Meanwhile, Cianciarulo continued to lead with Marvin trailing. Justin Barcia went for a pass on Joey Savatgy in the final corner and ended up going down, however he managed to get back up quick and not lose a spot. Adam Cianciarulo snagged the heat race win after a solid performance.

As the final heat race of the night left the gate, Ken Roczen was off to the early lead with a few bike lengths on the rest of the field. Zach Osborne sat in second with Dylan Ferrandis just behind. Eli Tomac was clicking off positions as he worked his way through the field. After getting around Tickle, Tomac began working on Ferrandis. Dylan Ferrandis cross-rutted through the rhythm lane and lost some time to Tomac but remained in third for the time being. As Roczen continued to lead, Ferrandis and Tomac reeled in Osborne in second place. Eli Tomac slingshot around the outside of Ferrandis to make the pass and then began working on Zach. Tomac went for the pass in the last corner, but Osborne took him wide and held onto the spot. Ken Roczen took the heat race win after a dominant performance.

As the gate dropped for the 450 LCQ, Gardner was off to the early lead with Vince Friese alongside. Not for long, though, as Vince quickly passed for the lead and tried to run away. Jason Anderson passed into second and wasted no time in getting Vince for the lead, as he tripled through the rhythm lane and into the lead. Meanwhile, Justin Bogle sat outside of a transfer position in sixth place. A few laps later, Clason made a mistake that allowed Bogle to move into fourth place. With two laps to go, Bogle made the move on Gardner for third place. As the checkered flag waved, Jason Anderson picked up the LCQ win and went onto the main event.

As the 450 main event left the gate, Eli Tomac was off to the early lead with Joey Savatgy alongside. Meanwhile, Justin Barcia and Malcolm Stewart were down after the first turn after solid jumps. Back up front, Adam Cianciarulo passed into second with Ken Roczen trailing, as the two chased down Eli Tomac. Eli Tomac went down after the whoops and dropped to third place. Cianciarulo was then left with the lead, but Ken Roczen continued to pressure. Martin Davalos went down off of the track after cross-rutting in the rhythm lane. Back up front, Roczen continued to pressure Cianciarulo and showed him a front wheel a few times but was unable to make the pass for the time being. Eli Tomac went for a pass on Roczen, but Ken closed the door and held on to second place for a little while longer. Ken Roczen again went for the pass on Cianciarulo and was finally able to get it done after taking the inside line. Eli Tomac then followed and got around his teammate in the next turn. A lap later, Adam Cianciarulo tucked the front end while running in third and lost time on the top two. Back in the field, Justin Barcia made a mistake while trying to get by Plessinger and jumped off of the track but quickly rejoined. Joey Savatgy continued to hold off Cooper Webb, as the two battled for fifth place. After pressuring Savatgy for over half of the race, Cooper Webb finally made the pass for fifth place, just before Ferrandis jumped off of the track while running in fourth. Dylan Ferrandis dropped to sixth place after the mistake and then was passed by a charging Zach Osborne. As Cooper Webb reeled in Cianciarulo, Osborne began to give chase to Webb. While leading, Ken Roczen jumped off of the track, which let Eli Tomac to move into the lead. However, Tomac only led momentarily, as Roczen immediately re-passed Eli for the lead. Cooper Webb finally completed the pass on Cianciarulo for third place, after pressuring for a few laps. As the checkered flag waved, Ken Roczen took the win and picked up his first race win of the year. 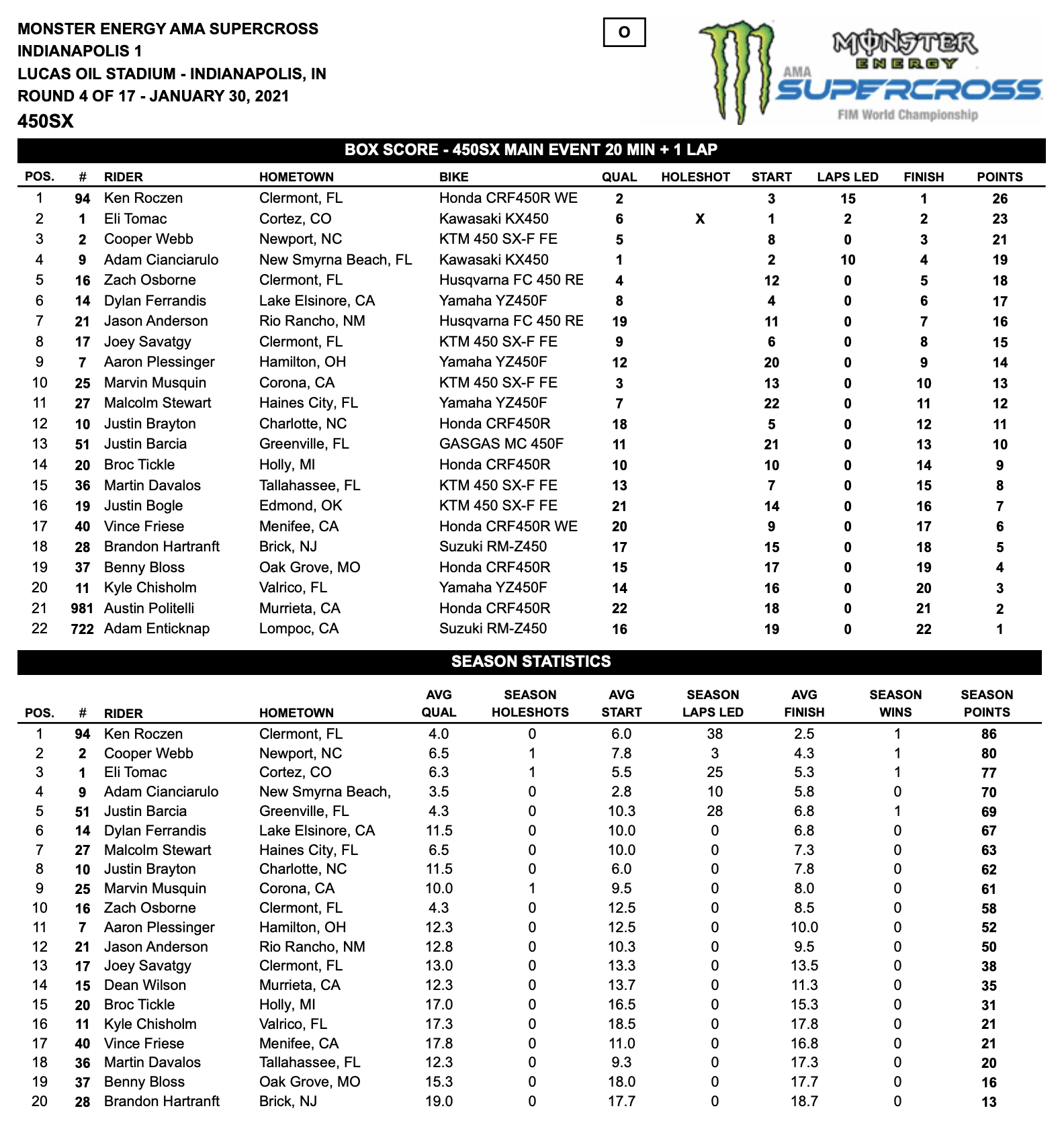 2021 Indianapolis One Supercross | GoPro Onboard