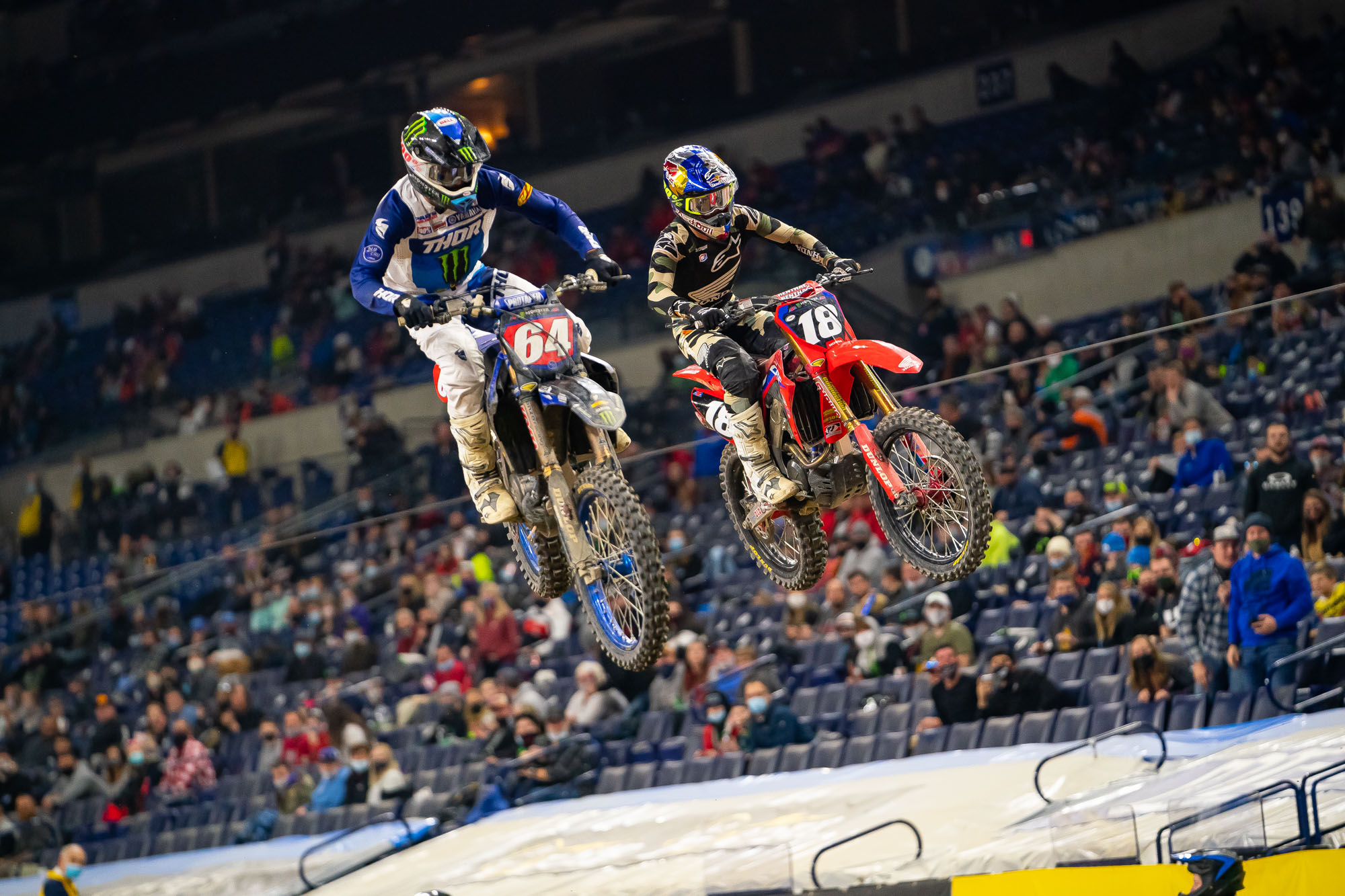 And that’s a wrap on our time in Indiana. The 2021 Monster Energy Supercross Series completed its trio of races at Lucas Oil Stadium with the 2021 Indianapolis Three Supercross, an eventful and exciting sixth round of the season. Ken Roczen solidified his status as the top rider in the 450 Class with his third consecutive 450 Class Main Event win, while Christian Craig scored his second victory of the season and tightened the championship points between himself and Colt Nichols.

Honda HRC’s Jett Lawrence returned to action after sitting out Tuesday’s main event with a banged-up shoulder and ripped a fine-looking holeshot aboard his CRF250R, leading Muc-Off Honda’s Mitchell Oldenburg and the rest through the first corner. Lawrence looked solid as he led the way, but lacked his usual spark as he was obviously riding conservatively to make it through the evening without further injuring his shoulder. Monster Energy/Pro Circuit/Kawasaki’s Jo Shimoda moved into third and began to close in on the lead pair of Hondas. Just past the halfway point of the heat, Oldenburg caught fire, closed to Lawrence’s rear wheel, and took over the lead with an authoritative pass. On the penultimate lap, Shimoda skimmed the whoops so fast that he blew past both Lawrence and Oldenburg, but as he pushed the Muc-Off rider wide in the corner that followed, Lawrence snuck back into the lead. Shimoda charged hard down the next rhythm section and looked to take the lead back, but he clipped a Tuff Block and crashed out of contention and back to an eventual third. Lawrence scored the win over Oldenburg.

Monster Energy/Star Racing/Yamaha’s Christian Craig timed the start perfectly and led his teammate through the tricky right-hand first corner. Craig looked great as he led the first lap, but there was no denying fast-qualifier, Nichols, as he found his way past and rode on to a comfortable win, some four-seconds ahead of Craig, who was all alone in third. Devin Simonsen and Frenchman Brian Do rounded out the top four, quite a ways back.

Jonah Geistler led the way in the 250 LCQ, but Hunter Schlosser found his way past on lap three and maintained control of the lead for the final five laps to score the win and a ticket to the main event.

Nichols snagged the holeshot at the start of the 250 main event and led Oldenburg, Craig, and the rest through the first corner, but a front-end push at the start of the first rhythm section saw the points leader suffer a scary crash. Nichols cartwheeled over the first jump and somehow landed on his feet, but he remounted in dead last while Craig took over at the point. Nichols went to work quickly and broke back into the top 10 within five minutes. Up front, Craig controlled the lead over Oldenburg early on, but Jo Shimoda found his way past and took over the position for good. Lawrence gated around 10th and worked into fourth at the eight-minute mark, just as Nichols worked into sixth only a few seconds behind. Nichols made quick work of Osby for fifth and closed to Lawrence’s rear wheel and made the pass for fourth just past the halfway point of the main. Lawrence struck back immediately, though, and held the Yamaha rider off with some defensive riding. Lawrence found his way past Oldenburg for the final podium position with a couple of minutes left in the race, and Nichols followed suit a pair of corners later.

On the penultimate lap, Lawrence was slowed by some lappers and Nichols swooped past for and amazing third, after having crashed on the first lap. Up front, Craig scored a massive win, followed by Shimoda, who rode a quiet race for his second podium finish of the series.

“I was off all day,” said Craig. “Nothing seemed to be going right all day, but it all came together in the main. Unfortunately, my teammate crashed but I am glad to see that he wasn’t hurt and was able to come back.” 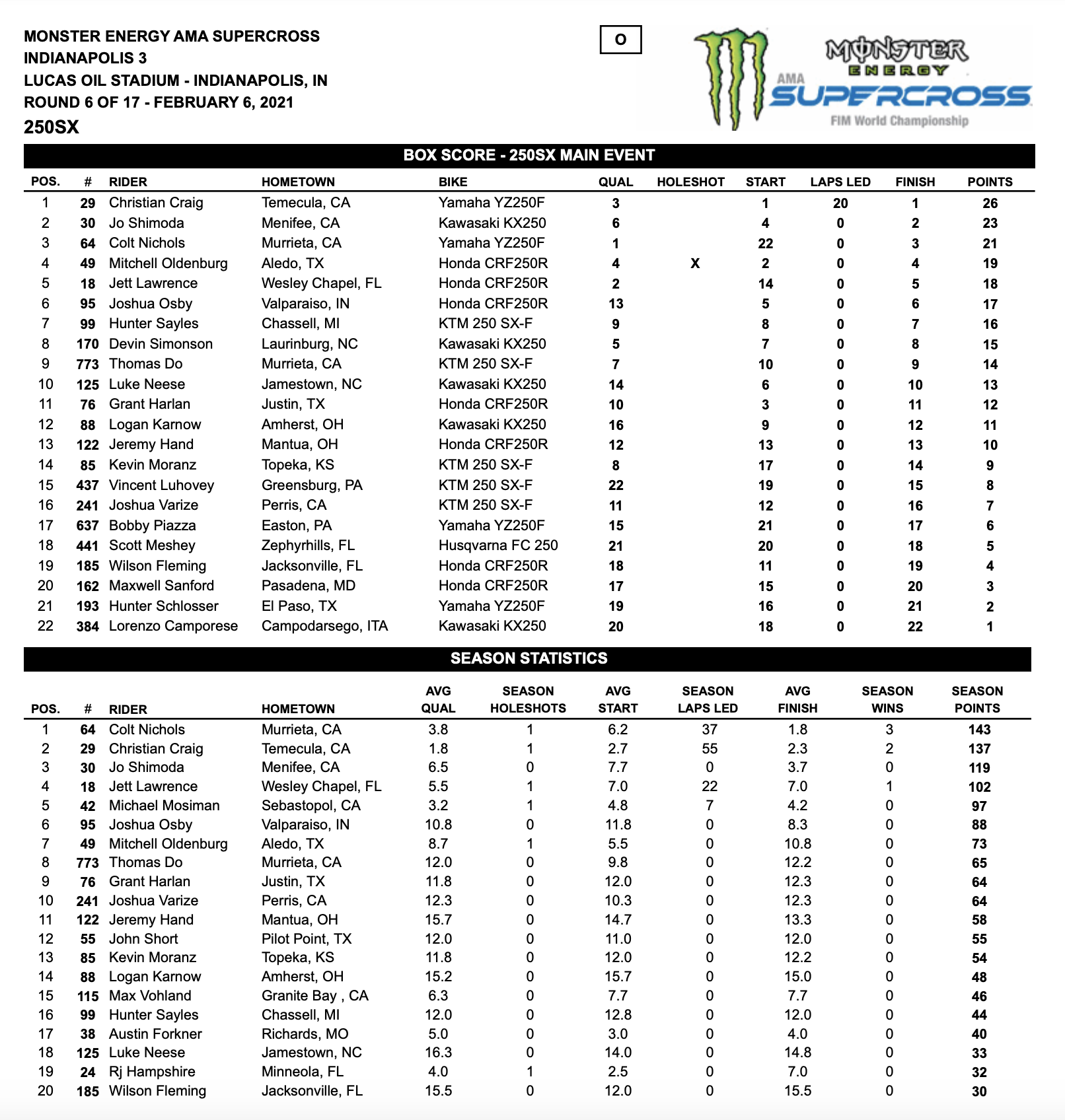 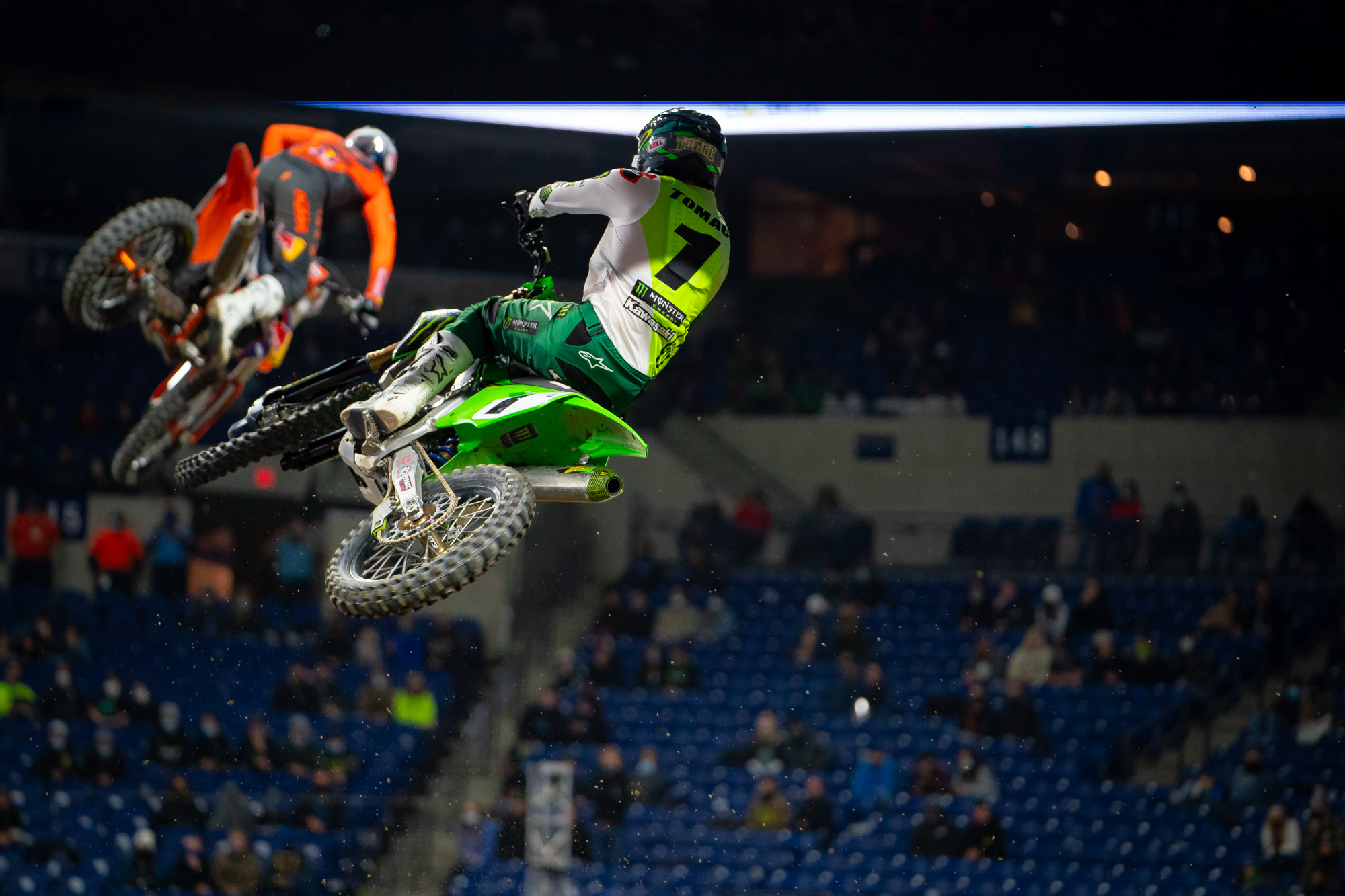 Honda HRC’s Ken Roczen holeshot the first 450 main and led every inch of the race. Roczen enjoyed a comfortable lead over defending Supercross Champion Eli Tomac through most of the race, but Tomac turned up the heat as the laps wound down and closed to within a couple of bike lengths at the finish line. Rockstar Energy Husqvarna’s Zach Osborne was solid. in third, while Malcolm Stewart had a wild ride to fourth.

The start of the second 450 heat yielded a lot of action as Justin Bogle snared the holeshot. Former champ Jason Anderson dive beneath Bogle to take the lead almost immediately, but then Frenchman Marvin Musquin stole the lead on his Red Bull KTM for the third lead change on the opening lap. Musquin appeared to have a lock on the lead, but a miscalculation in the short whoop section saw him careen into the tuff blocks and crash out of the lead, handing the win to Troy Lee/Red Bull/Gas Gas Factory Racing’s Justin Barcia. Former champ Cooper Webb – who qualified fastest earlier in the day – suffered a mediocre start but worked into second by the race’s end.

Joan Cros led the way at the start of the 459 LCQ, but PRMX’s Cade Clason took over the lead on lap two and held the position until Muc-Off Honda’s Justin Brayton recovered from a poor start and worked through the field, and raced into the lead. Clason held on to second over Kyle Chisholm and Adam Enticknap, who earned a ticket to his third main event of the season.

Roczen banged his way through the first corner at the start of the main and led Barcia, Webb, Adam Cianciarulo, and Tomac through the first lap. Barcia pressured Roczen for the lead and made an aggressive move early on that saw the lead duo collide in a corner and lose all momentum momentarily. Tomac found his way past Ciancairulo at the five-minute mark and with that, the four 2021 event winners on the season controlled the top four spots.

At the halfway point, Roczen held down a nearly two-second lead over Barcia, who was in turn nearly four seconds ahead of Webb and Tomac. Behind them, a great battle for fifth waged between Malcolm Stewart, Cianciarulo, and Marvin Musquin.

Webb turned up the heat in the second half of the race and closed to the rear wheel of Barcia. Webb found his way beneath Barcia with five minutes to go and took over the runner-up position. Tomac was next to make a move on Barcia, but the Gas Gas rider retaliated and regained third only two corners later. Webb found himself with a nearly three-second deficit to Roczen when he moved into second, but he immediately began to chip away at his rival’s lead. With three laps to go, Barcia crashed into the back of Vince Friese and went down hard, and his bike collected Tomac as well.

On the final lap, Webb pulled out all the stops and closed within striking distance, but there was no denying Roczen as he took the checkered flag and completed his sweep of all three Indianapolis Supercross racers. Behind Webb came his Red Bull KTM teammate Musquin who earned the last podium position following the Barcia and Tomac incident. Stewart crossed the finish line fourth and notched his best finish of the young series.

“I wasn’t gelling with the track tonight so I wasn’t riding as well as I should have,” said Roczen. “But it feels amazing to sweep all three races here in Indy.” 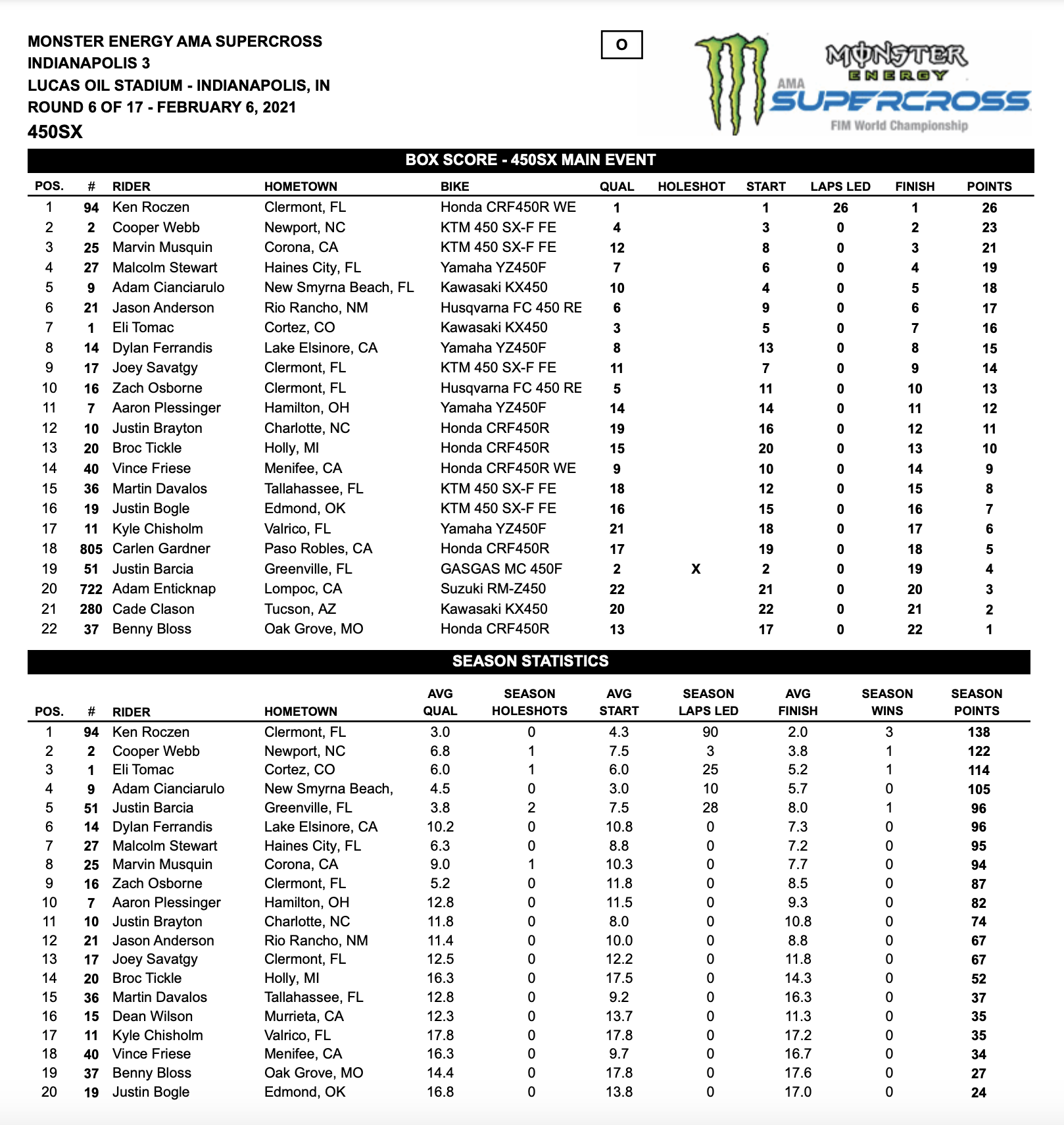 Orlando One Supercross | How Was Your Weekend
Donn Maeda February 15, 2021

2021 Indianapolis Three Supercross | How Was Your Weekend
Donn Maeda February 8, 2021

Orlando One Supercross | How Was Your Weekend

Checking in with Wil Hahn

2021 Indianapolis Three Supercross | How Was Your Weekend