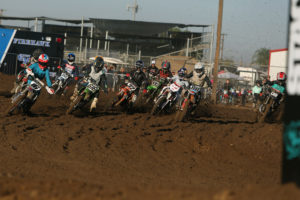 The seventh annual Mini Major West, presented by Seven MX, is officially in the books, as the four-day event dedicated to youngsters went off this past weekend at State Fair MX. Nearly 1,000 young racers filtered through the gates of the Perris, CA facility! We saw plenty of exciting battles through-out the three days of racing, from pee-wee’s to supermini’s, each and every class delivered in action. We were trackside sunrise to sunset to both capture and witness the activities, and after taking photos of all 33 individual classes; we can safely say the future of our sport is looking bright. Just incase you missed out on this years Mini Major West, we’re going to do our best to highlight some of the youngsters and their stand-out rides. 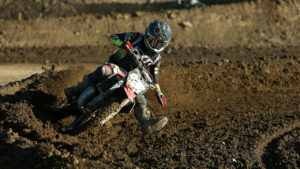 With nearly 1,000 race entries, the 33 individual classes were destined to be stacked full. One of those 33 classes and arguably the fastest class of the event; the Supermini 1 division saw 18 talented youngsters, two of which scored moto wins. However, Evrett Clarke stayed consistent throughout the three days of racing and earned the overall class victory in Supermini 1 with his second place finishes on each day. It’s not often that an overall is awarded to a racer who didn’t win at least one moto, but that about sums up how exciting each moto was to watch in the stacked class. As for the racer, Evrett went on to claim the overall victories in both the Supermini 2 and Supermini 3 Open classes. The youngster out of Utah left State Fair MX with 4 more moto wins to his name, and three more overall championships. Well done, Evrett! 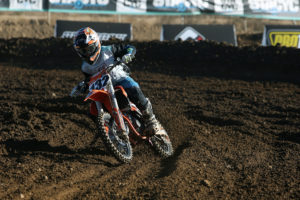 Continuing on with the Supermini division, our buddy Leum Oehlhof was one of the youngsters that snagged a moto win in the stacked Supermini 1 class. Not only did Leum pull away from the field in that moto, but he did so on a KTM 85SX, not a supermini. Leum went on to turn heads in both the 85cc/150F Open 13- 16yrs and 85cc/150F 14 – 16yrs classes, where he dominated in each moto. We even witnessed Leum have a tip-over with just a few laps to go and still work his way back into the lead. With 7 impressive moto wins on the weekend, we’d say Leum was pretty happy with his 2021 Mini Major West results. 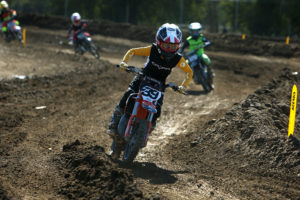 The 2021 Mini Major West, presented by Seven MX, brought in hundreds of families from outside of California. Despite having talented competition from all-over the west coast, a few of the local boys managed to end the weekend on top after showing the field the fast way around State Fair MX. Aidan Zingg, a swapmoto race series regular, showed some speed aboard both his KTM 65SX and KTM 85SX. The youngster is a familiar face at State Fair MX, so we weren’t too surprised to see him leading a few motos. However, we were quite impressed at the end of the four-day event when we saw that Aidan had taken home the overall victory in each class he contended in. That’s right, Aiden left the track having won 8-individual moto wins, leading to his success in each class overall. 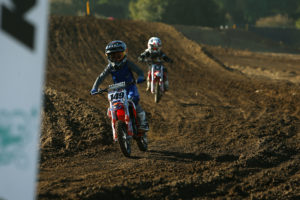 After watching three days of racing, it’s safe to say that action was had between racers on all bike sizes and in all age groups. Talon Hinson was one of the premiere racers in the Pee Wee classes, as he seemed to always be at the front of the field battling for moto wins. Talon came up just short of the overall win in two classes, but nearly dominated in the Pee Wee 4-6 years (10″ or 12″) class with two moto wins and a second place, resulting in the overall class victory. However, perhaps Talon’s most impressive rides on the weekend were in the KTM/Husky E-Challenge 4-6yrs class, where he grabbed each moto win with ease aboard his KTM E5.

As far as off the track highlights, Seven MX brought out a huge customized container that provided spectators with the best viewing area. Aside from the VIP spectating area, the guys at Seven also brought out a James Stewart KX125 and one of Malcolm Stewart’s Factory Husqvarna practice bikes for fans to look at. A few of their 2022 kits, that are set to release soon, were also on display. And if that’s not enough, SML test rider and helmet painter Kordel Caro was on-hand to paint helmets for anyone in attendance. 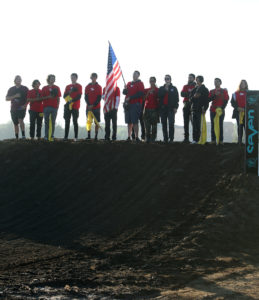 As the sun set on Sunday evening, nearly 1,000 youngsters had took to the track throughout 99 separate motos. Aaron Cooke and the staff at the Swapmoto race series managed to run the full program Friday, Saturday, and Sunday flawlessly with no interruptions. All while the staff at State Fair MX did their best to provide a safe, fun, and challenging race course for all ages. Huge thank you to everyone that made the 2021 Mini Major West possible.