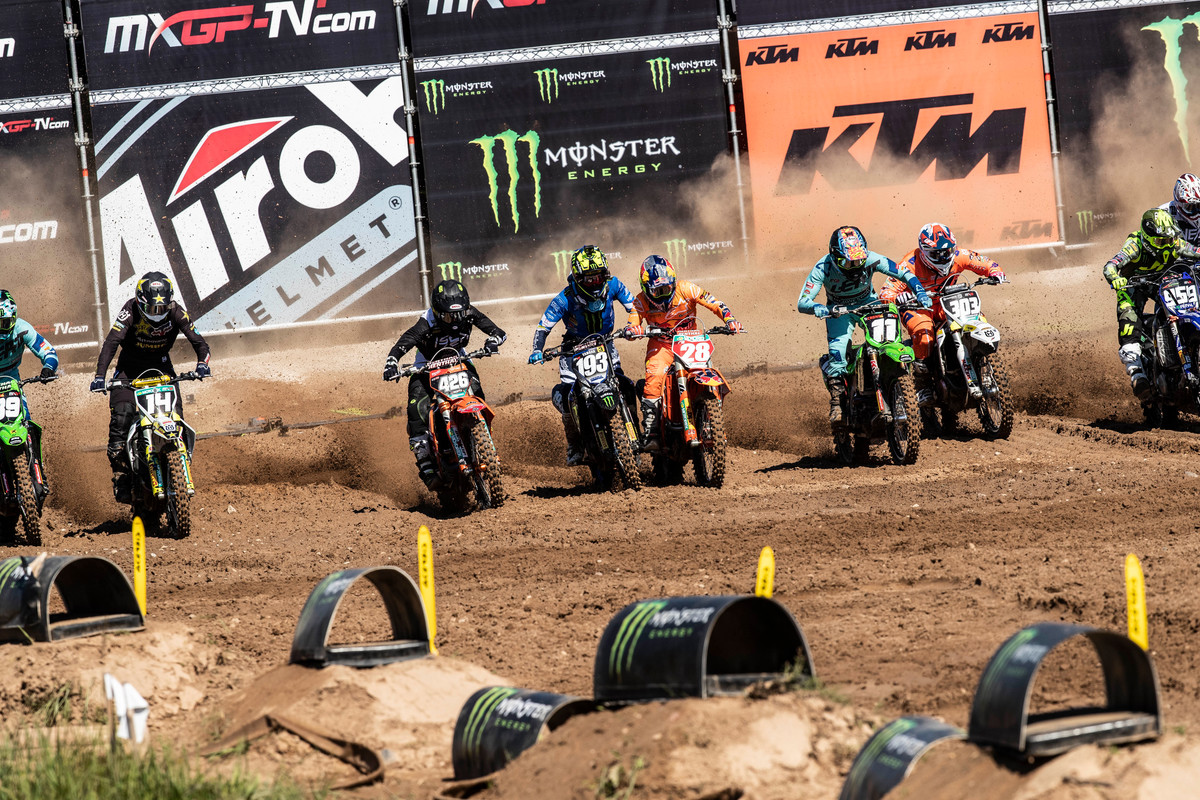 InFront Moto Racing has announced further delays to the 2021 Monster Energy FIM Motocross World Championship, a necessary step in response to restrictions that remain in place throughout Europe, the Middle East, and Asia. This is the third provisional plan for the 2021 race season, and with the ongoing global situation, it likely won’t be the last.

The series is now slated to be an 18-race tour through more than a dozen countries, starting on June 13 in Russia and ending on December 5 in Indonesia. This latest schedule is rife with changes, including the return of Matterley Basin in England, a new Italian venue, TBA locations for GPs in France and Argentina, and the continuation of the one-day format for the MX2 and MXGP classes.

Riders and teams have already made necessary adjustments in their day-to-day programs as a result of the delay. The three-race Internazionali d’Italia Motocross ran as planned in February and March, but there’s little planned between then and June’s scheduled start in Russia. Racers have backed down their training intensity to avoid peaking too soon, and teams have likely restricted riding to limit parts consumption.

InFront Moto Racing also announced that the 2021 Motocross of Nations is now set to take place in Mantova, Italy, on September 26. The likelihood of this race happening is questionable; it will be in the middle of the MXGP season, between races at Riola Sardo in Italy and Teutschenthal in Germany, with no break.

A closing quote in the press release states that “there will be a possibility to finally welcome back spectators in the summer months.” 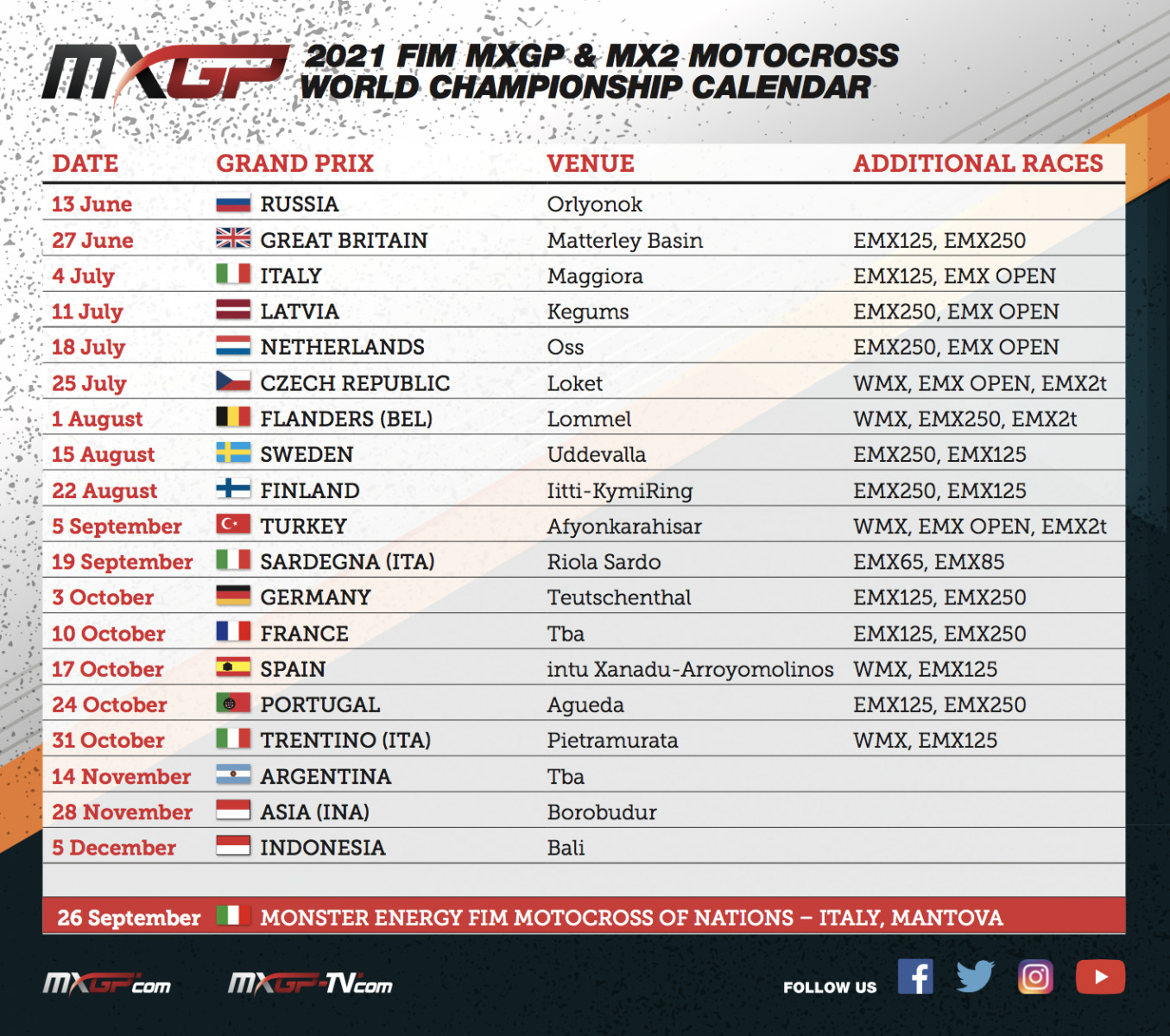 Infront Moto Racing would like to inform on the updates to the 2021 calendar of the FIM Motocross World Championship.

Due to the global Covid-19 pandemic, the decision has been made to delay the start of the upcoming season, as the FIM Motocross World Championship will kick off in Orlyonok with the MXGP of Russia on the 12th – 13th of June.

The updated calendar will also welcome back the MXGP of Great Britain in Matterley Basin on the 26th – 27th of June, followed by the MXGP of Italy at the legendary circuit of Maggiora on the 3rd – 4th of July. MXGP of Latvia, MXGP of the Netherlands and Czech Republic will come next in July, before heading to the deep sand of Lommel for the MXGP of Flanders in August.

MXGP will then move to Sweden on the 14th and 15th of August, followed by the MXGP of Finland and MXGP of Turkey.

The newest addition to the 2021 racing calendar is the MXGP of Sardegna, with the popular winter training facility of Riola Sardo hosting the round 11 of the campaign, with the EMX65 and EMX85 Championship races held on the same weekend.

The championship will then continue with the MXGP of Germany, France, Spain, Portugal and Trentino in October, with a venue for the French Grand Prix to be confirmed soon.

Meanwhile the Monster Energy FIM Motocross of Nations will go ahead on the 26th of September, as originally planned, with the Italian circuit in Mantova confirmed as the newest host of the prestigious event.

Additionally, the FIM-E Motocross of European Nations scheduled on the 18th and 19th of September, will now be as TBA, with more details to be announced at a later date.

The same race format as last year will be used during the upcoming season meaning that MXGP and MX2 will all run on Sunday and EMX and WMX run all on Saturday. The decision to run a one day format was made due to the tight racing schedule in order to allow more recovery time for the riders and the team staff.

Infront Moto Racing is hopeful that with the recent development of the vaccine, there will be a possibility to finally welcome back spectators in the summer months, which is very important to our beloved sport.

We would like to thank the FIM, FIM-Europe, all the organisers and federations along with the teams, riders, partners and fans for their continued support and understanding, as MXGP remain committed to bringing another epic season of racing!