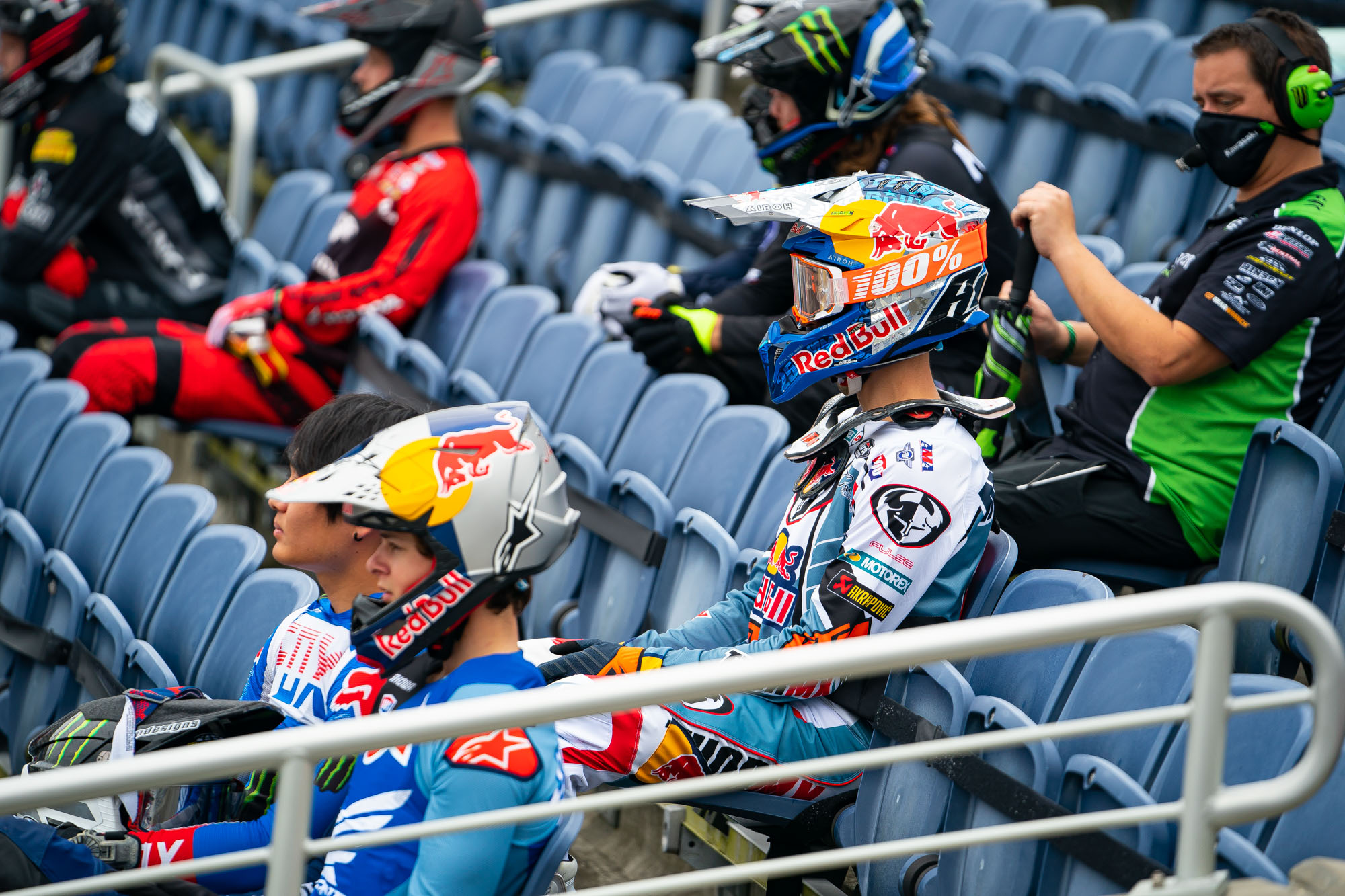 Well, that was quite the afternoon. The 2021 Monster Energy Supercross Series is in its first open-air venue of the season for the 2021 Orlando One Supercross, and in typical Florida, a morning storm soaked the circuit. Fortunately, the Dirt Wurx crew was ready for this sort of thing and covered the track in tarps shortly after the build was complete on Thursday. After an altered afternoon schedule, they pulled the covers off and revealed a mostly dry track for the afternoon Timed Qualifying sessions. Yes, it was wet and greasy in spots, but the majority of the course was fine and riders were able to get up to speed during the two practices. 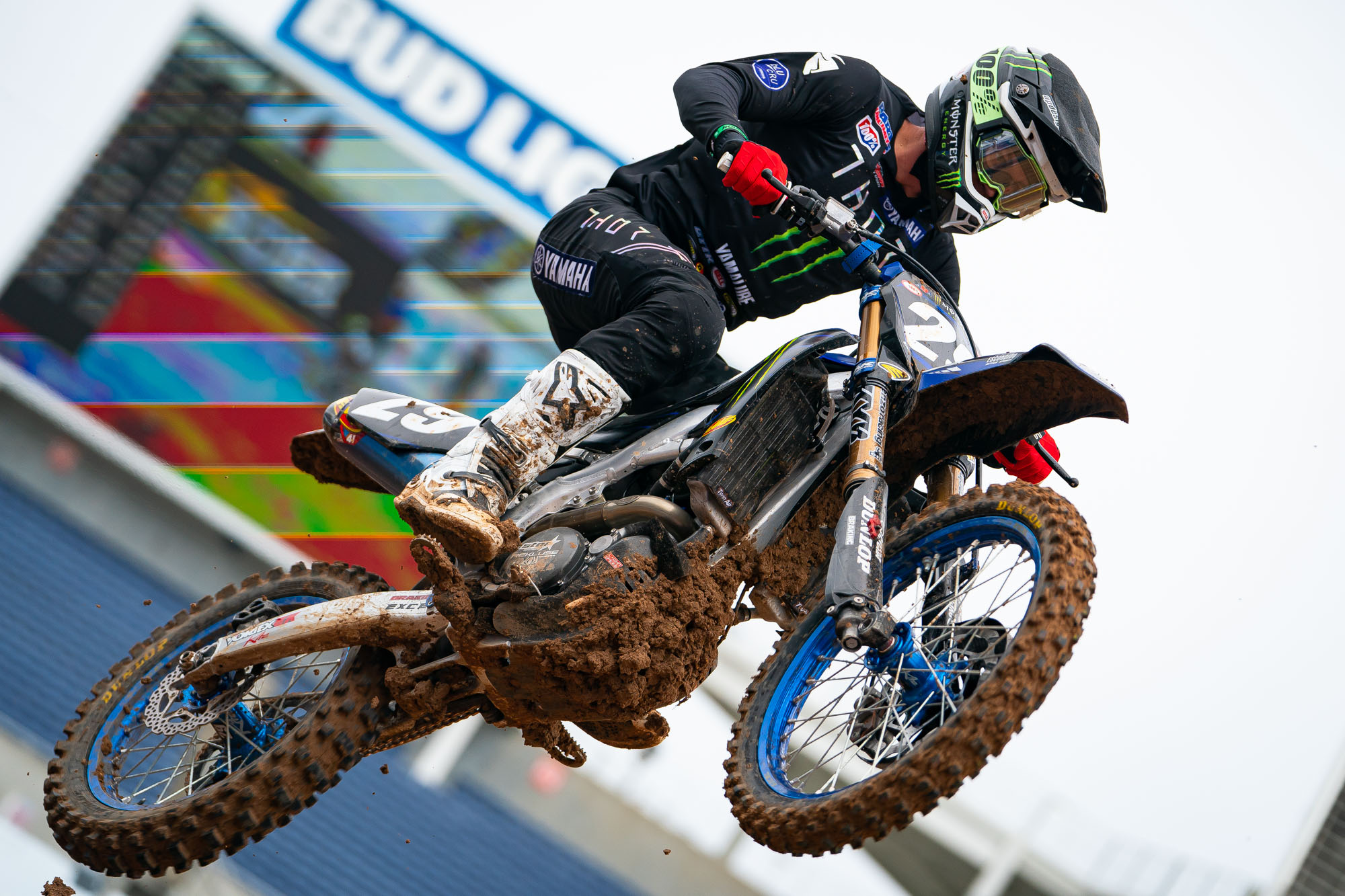 The hard packed, slick red clay looks exactly like the California test tracks and that suited Christian Craig perfectly. The Monster Energy/Star Racing/Yamaha rider was the fastest in the 250 Class during both sessions, with his best time being a 52.422 late in the afternoon.

Monster Energy/Star Racing/Yamaha’s Colt Nichols and Team Honda HRC’s Jett Lawrence were split by only 0.033 seconds on their best laps. Nichols was the quicker of the two, with a 52.710 to Lawrence’s 52.743. 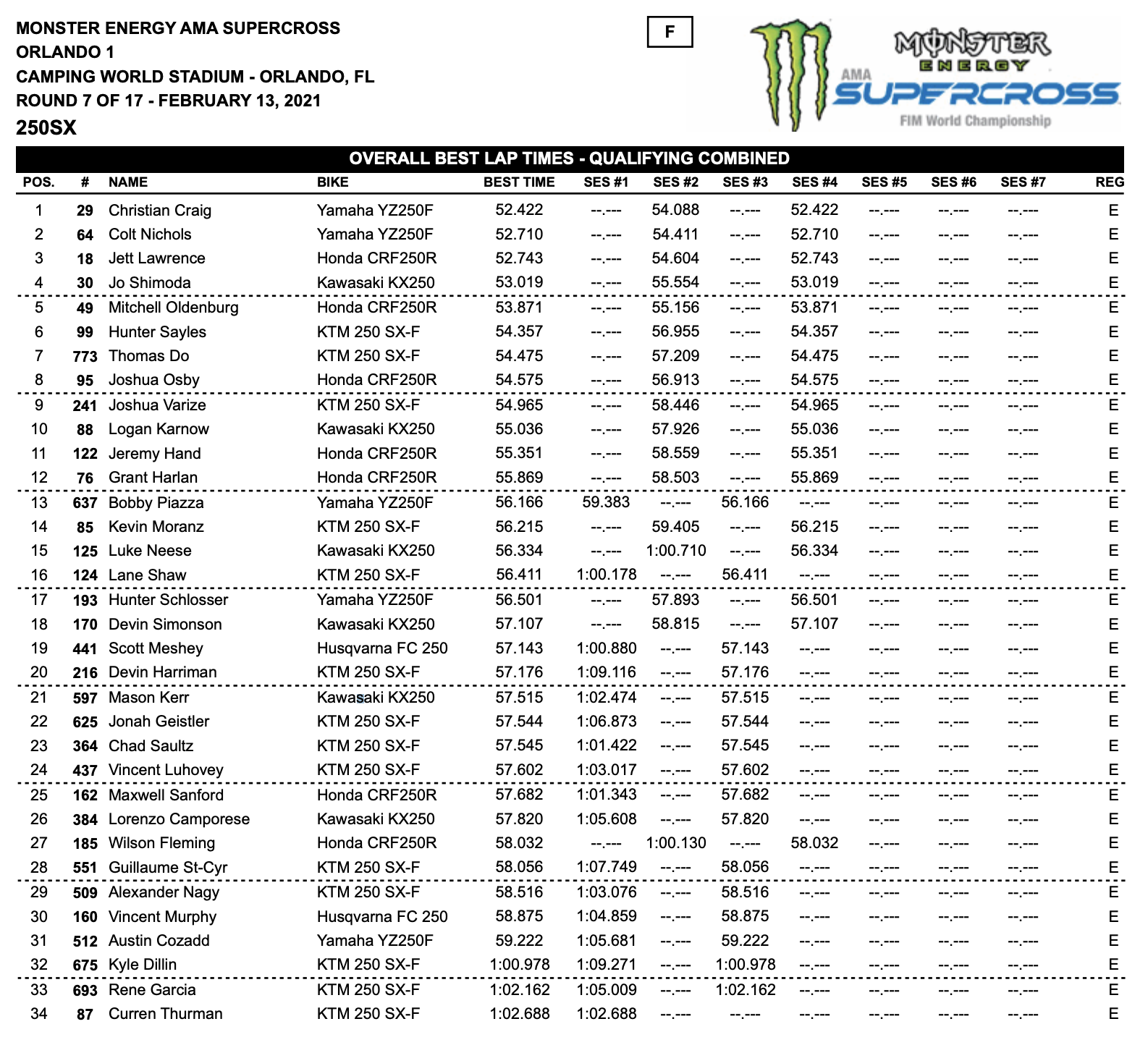 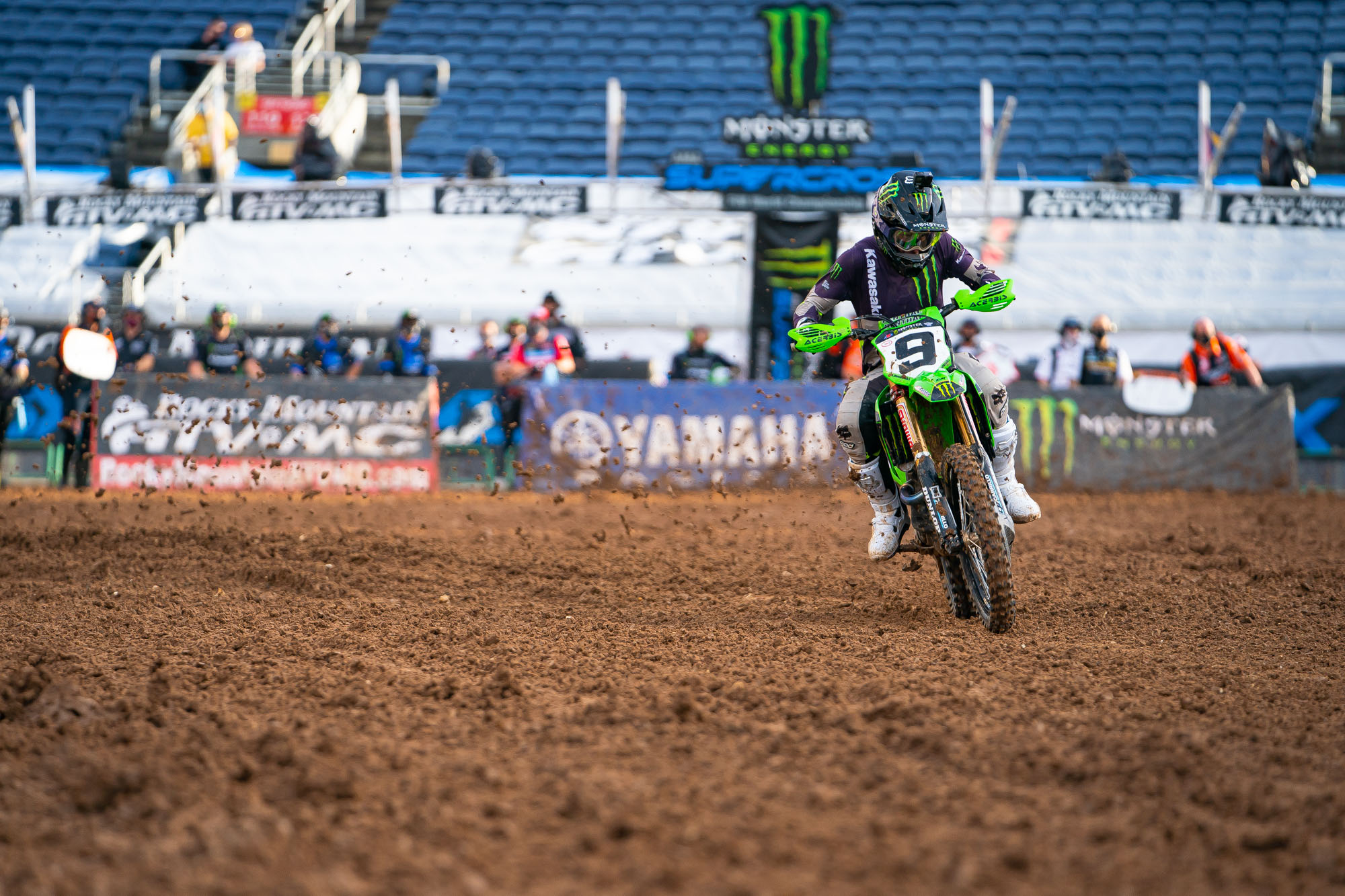 The tricky, ever-changing conditions will make tonight’s race one to remember and there are a handful of riders that excel in technical situations like this. The top-eight qualifiers were within a second of each other on the final sheet and there was a big shake-up from the usual running order.

Adam Cianciarulo got the best time of the day, a 50.711, in during the late moments of the final Timed Qualifying session. This is the Monster Energy Kawasaki rider’s first “pole position” of the season.

Cooper Webb continued his sudden run of fast qualifying times. The Red Bull KTM rider was ranked second overall after a 50.719. Cianciarulo and Webb were the only two in the field to dip under 51-seconds.

Malcolm Stewart was third-fastest in the class after a 51.044, a massive step forward for the Monster Energy/Star Racing/Yamaha rider.

Shane McElrath is a new addition to the 450 Class. The Smartop/Bullfrog Spas/MotoConcepts/Honda rider was sixth-fastest overall, despite being in the B Group at his first Supercross of the season. 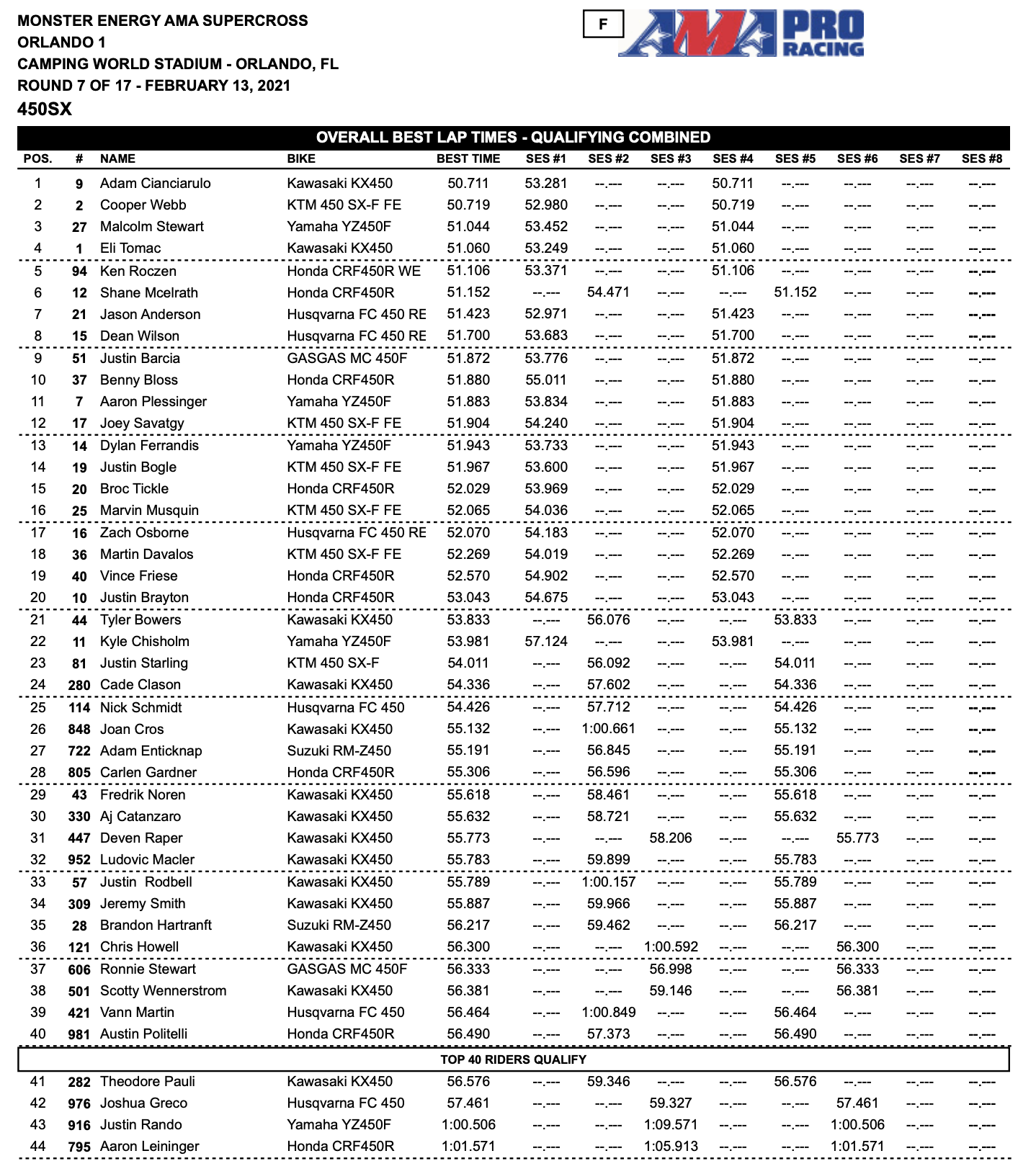