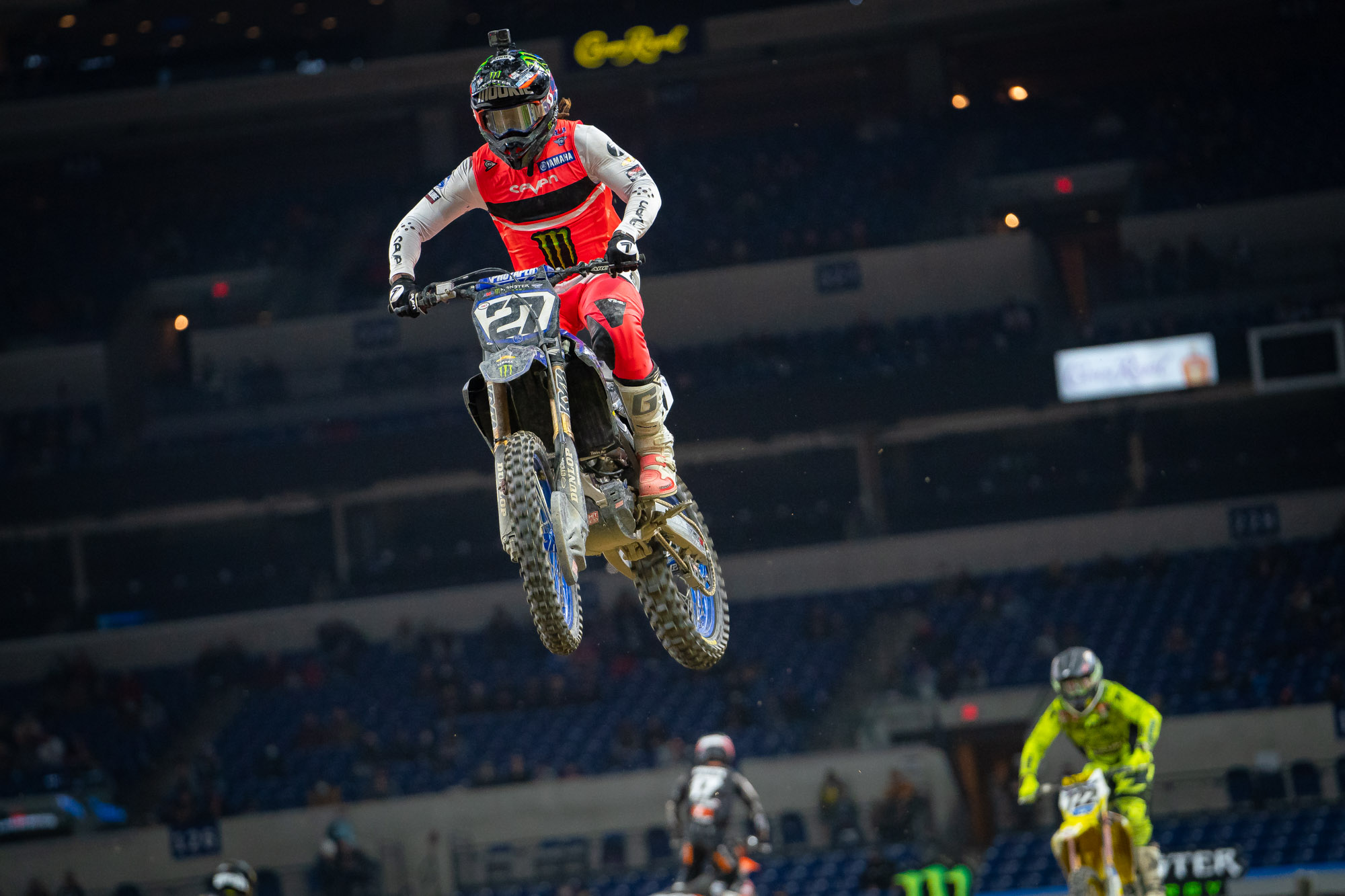 Following a few frigid days in the Midwest, the 2021 Monster Energy Supercross Series has headed South for a two-race thaw out in Central Florida. The 2021 Orlando One Supercross will serve as round seven, the last for the 250 East Coast Region before an extended break, and the first event of the season to take place in an open-air venue. These things will be factors in the race’s outcome, especially as we enter a critical time in the championship chase. Round seven is when Supercross usually escapes from the West Coast and when the real breakaways begin by championship contenders.

The three-race cycle used in Houston and Indianapolis ushered us a third of the way through the 17-round championship yet has offered little opportunity to try different things in testing, regroup between races, or stay in a routine. It took a toll on competitors and magnified the separation between groups, but because racers want to race, this hasn’t been considered all bad.

There’s no better place than for the series to spend a month in right now than Florida. Riders and teams have grandiose plans to fill the next few weeks, with many planning to cram test sessions, training days, or recovery into the breaks between races. They’ll have “ample” time to get it done, too, because there is a five-day gap between the Orlando rounds and a 13-day pause from Orlando to Daytona. Whoever manages this midseason break best will go into the final part of the season with an advantage.

We’ll be blunt: someone has to beat Ken Roczen, and soon if they want a chance at the 450 SX championship. The Team Honda HRC rider was inarguably the best rider through the first six rounds, and even with some costly issues, still maintains a sizeable lead in the point standings. His back-to-back-to-back wins in the Indianapolis period showed his physical prowess, belief in the bike and stable mental state. Webb, Tomac, and Barcia tried their best to break Roczen, but he buckled down, beat them to the finish line each time, and leads the series by 16-points. Does he do it again at his “home race?”

Cooper Webb usually excels during this time of year. The Red Bull KTM rider has a history of season-changing results, with a surge that typically starts at round six or seven and is complete with come from behind charges on softer East Coast tracks. He has done it a few times already this year, which landed him the Houston Three win and Indianapolis Three runner-up score, and it’s no secret that he uses the tactic every chance he gets. Based on recent riding, Webb is currently the biggest threat to Roczen.

Eli Tomac is overdue for a trademark ET3 effort. The Monster Energy Kawasaki rider has been very good through the first part of the year; he avoided any major issues or crashes but admittedly hasn’t been able to rip through the pack when he feels like it. An excellent start is a must right now, something that Tomac has gotten sporadically and hasn’t made the most of every time. Don’t stress Eli fans; Daytona is on the horizon, and the three Atlanta races look like they could favor the multi-time 450 MX champion. 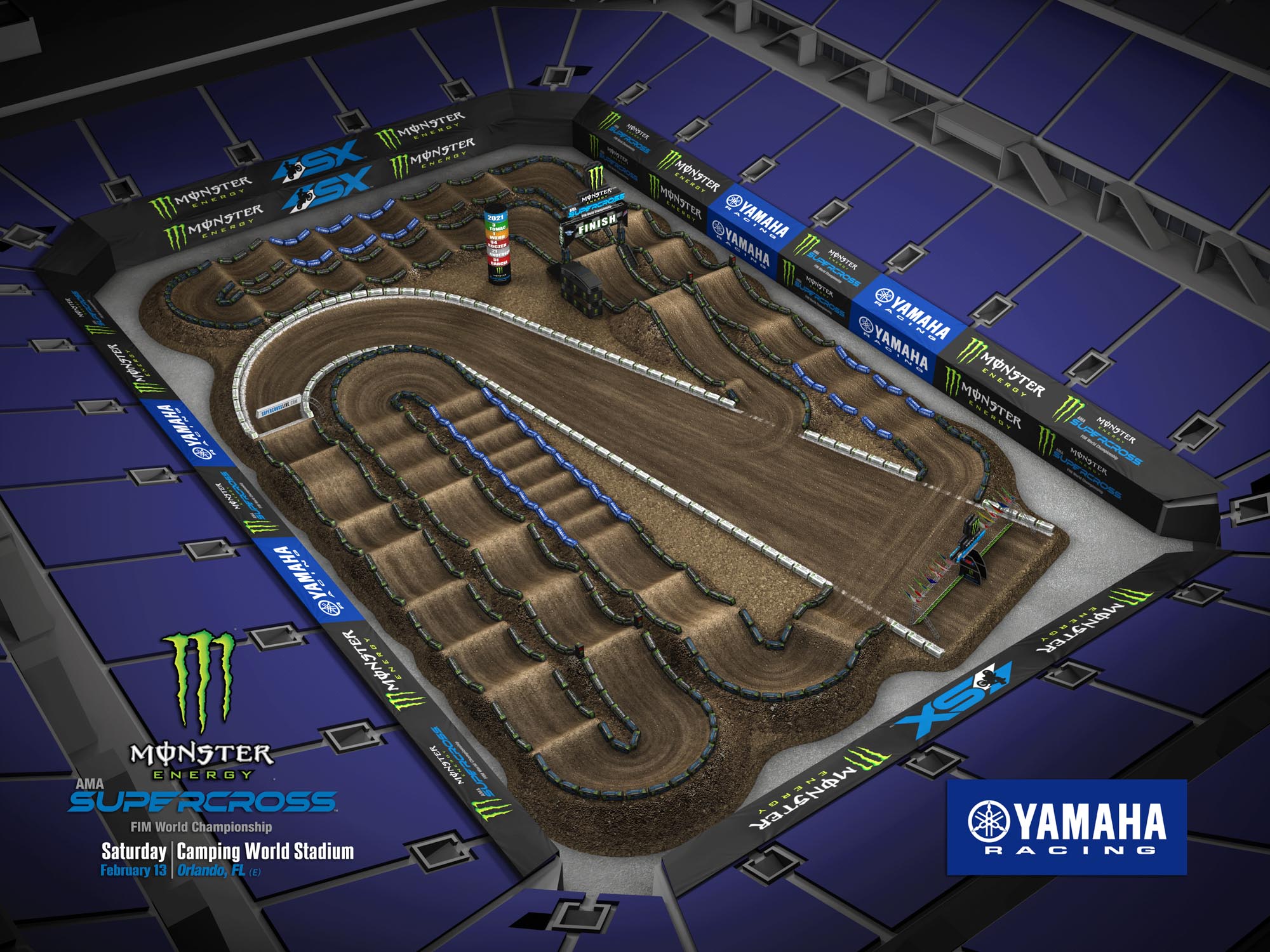 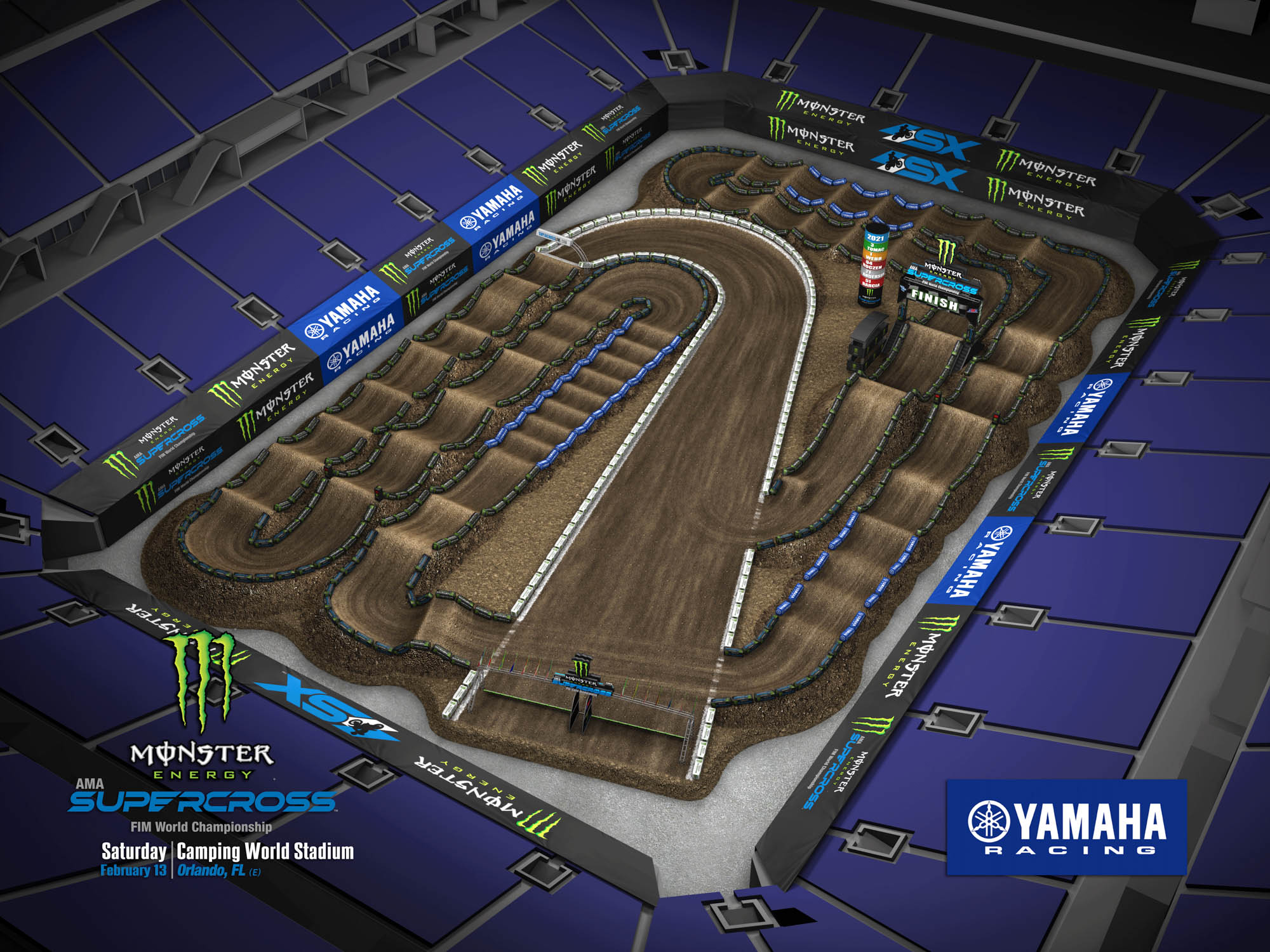 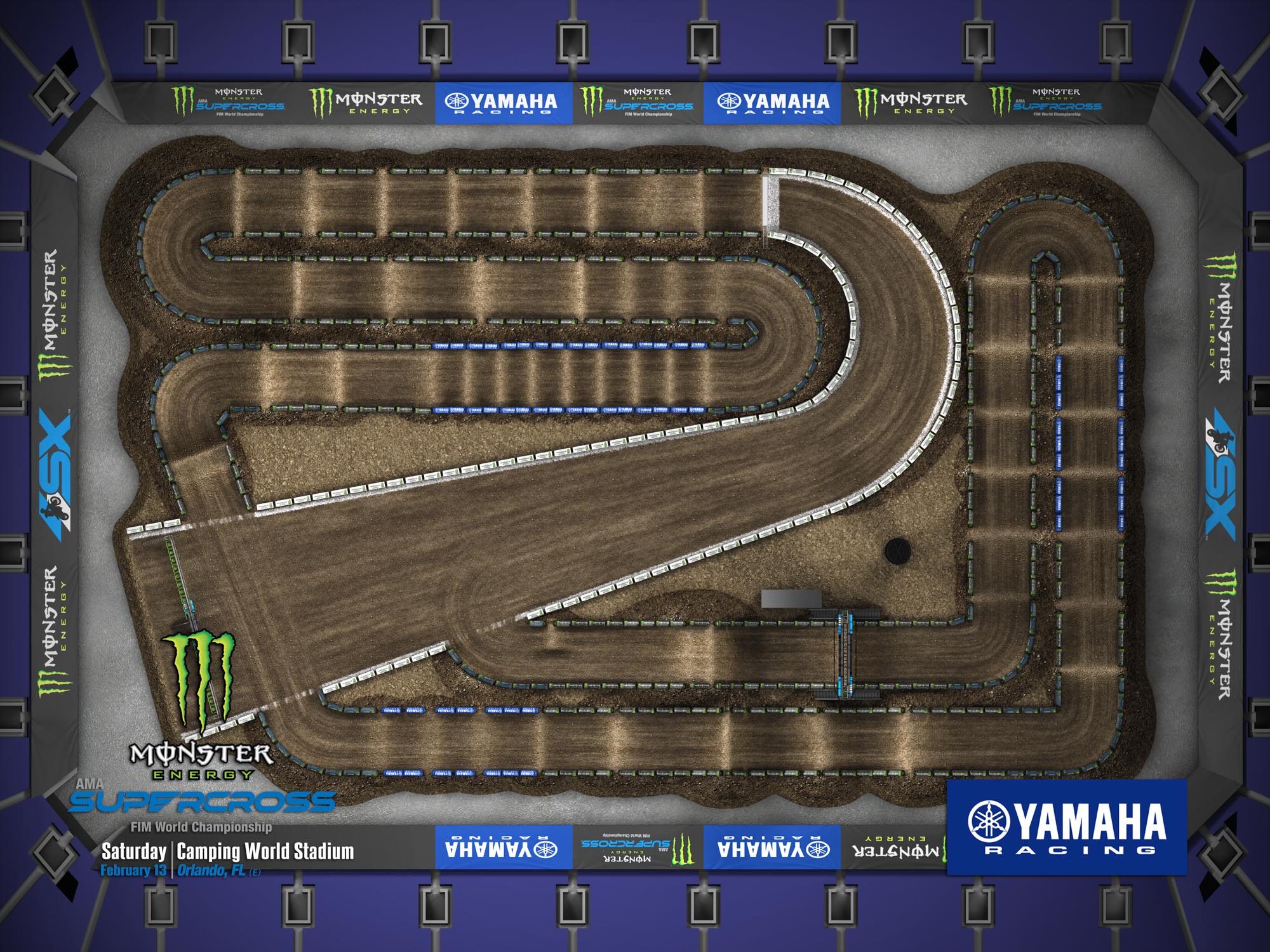 The Orlando One Supercross layout is set to be a copy of the 2007 race at Camping World Stadium. We say “set to be” because the tracks have changed tremendously in terms of lane size, obstacle shape, and ability to hold up against 20-minute plus one lap motos. There is a lot of buzz about how the current generation will compare to RC-James-Reed did 14 years ago, but until we see the track in its final stage and with bikes on it, this is all speculation.

Like we mentioned in the intro, this will be the first open-air venue of the season, and concerns about the weather have been circulated all week by teams, officials, and fans. Rain is always expected in Florida, so Dirt Wurx wrapped the track in tarps shortly after their build was completed, and Feld Entertainment canceled the Friday riding session in favor of keeping the covers in place. There is a chance of rain starting Saturday afternoon and through the night, but the forecast keeps changing (typical Florida) and now calls for a storm in the afternoon and for the heaviest rain to come well after the race is over. Either way, we have rain gear ready to go. 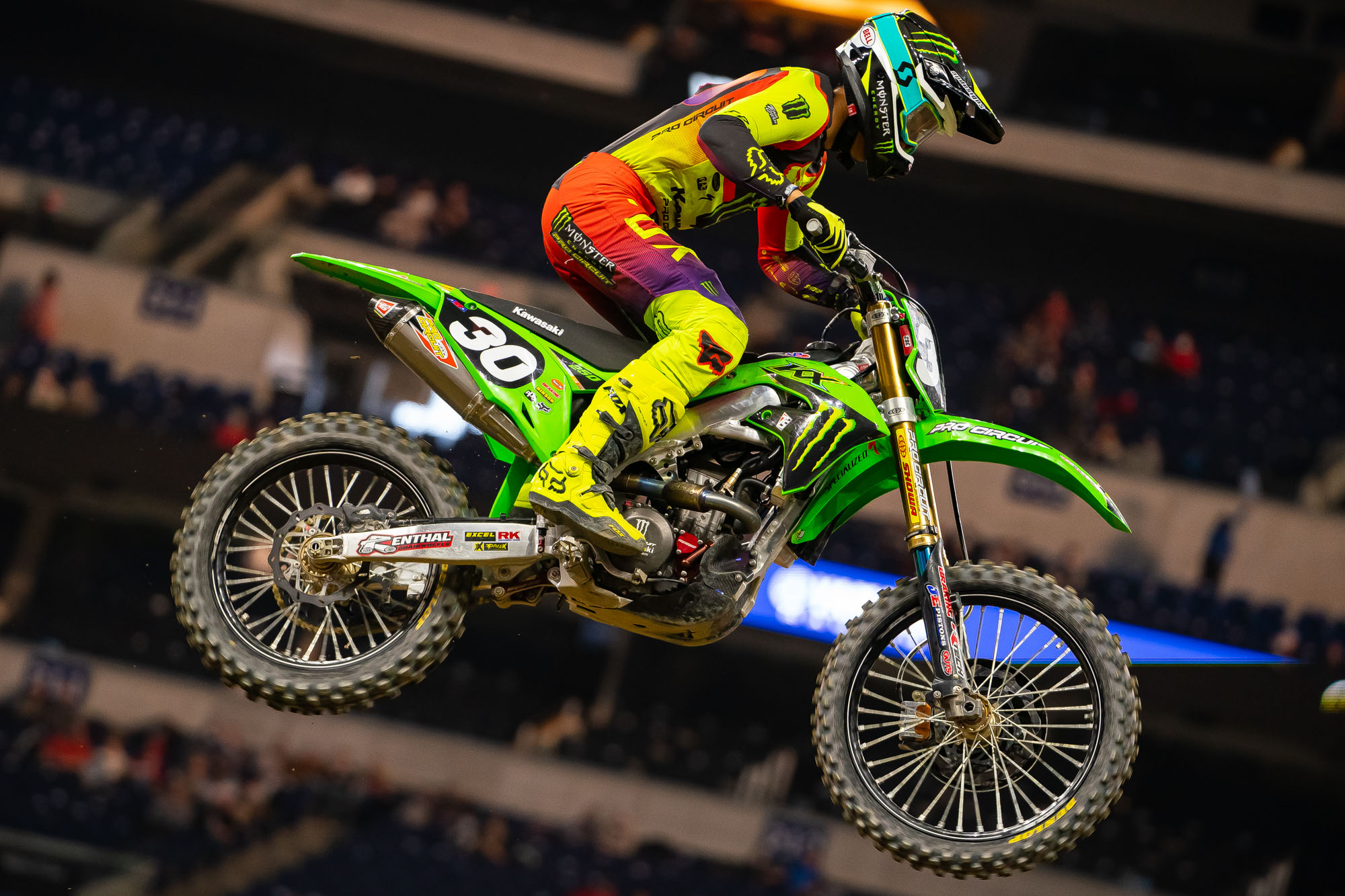 55. John Short | The BAR X/Chaparral/ECSTAR/Suzuki rider dinged his shoulder in a first-turn crash at Indianapolis Two and sat out Indianapolis Three. He is expected to race Orlando One.

24. RJ Hampshire | The Rockstar Energy Husqvarna Factory Racing rider is hurting. His finger was smashed during a run-in with Christian Craig at round one, road rash was left on his torso from an incident with Austin Forkner at round two, and a crash in Free Practice at round three left him with a significant wrist injury, including a perilunate dislocation, chipped ulna bone, and broken metacarpal. He will be out for an extended period of time.

38. Austin Forkner | The Monster Energy/Pro Circuit/Kawasaki rider will be absent after a collarbone injury at Houston Three. He had surgery to have fracture plated and the team will have a full update soon, but expect him to race before the end of the season.

42. Michael Mosiman | The Troy Lee Designs/Red Bull/GASGAS Factory Racing rider broke his hand in three places at the Indianapolis Three Supercross, an injury that will require surgery, and he will miss the Orlando One Supercross.

115. Max Vohland | The Red Bull KTM rider will miss the Orlando race after suffering a dislocated hip at the Indianapolis One Supercross

116. TJ Albright | The New York privateer privateer will sit out the next few races due to a crash and injury during practice at Indianapolis One.

604. Max Miller | The Orange Brigade KTM rookie suffered multiple transverse fractures to the lumbar vertebra in his back. He will be out for the Orlando race.

914. Geran Stapleton | The Australian racer has been sidelined with four broken ribs and three compression fractures of the vertebra after a Houston Two crash.

12. Shane McElrath | The SmarTop/Bullfrog Spas/MotoConcepts/Honda rider will return to action at Orlando One; the 450 Class rookie missed the first part of the season with a Grade Three AC separation.

15. Dean Wilson The Rockstar Energy Husqvarna Factory Racing rider plans to ride practice at Orlando One after missing all of the Indianapolis rounds with a broken big toe and assorted minor injuries to his right leg. He will make a decision to race or not after practice.

981. Austin Politelli | The HRT-backed privateer will return to action at the Orlando One Supercross; Politelli missed the Indianapolis Three Supercross due to a concussion.

23. Chase Sexton | The Team Honda HRC rider is slated to miss Orlando One in order to further heal his shoulder from a crash at the Houston Two Supercross; he could return for Orlando Two.

34. Max Anstie | The Twisted Tea/HEP Motorsports/Suzuki rider sat out the first part of the season with a back injury and planned to return to action at the Orlando One Supercross; unfortunately, a limited amount of time on the bike has led him to delay the return one week and he now aims for the Orlando Two Supercross. 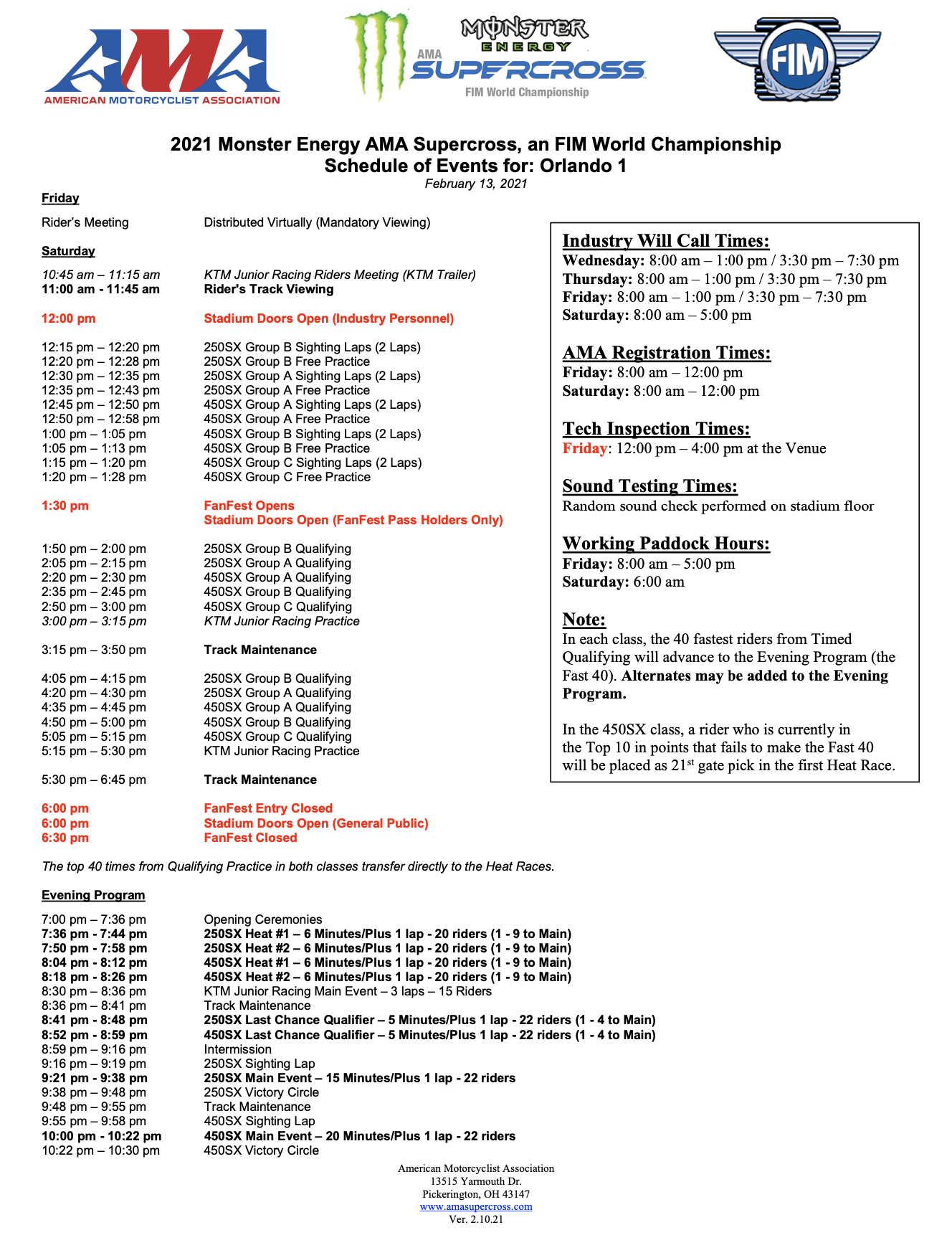