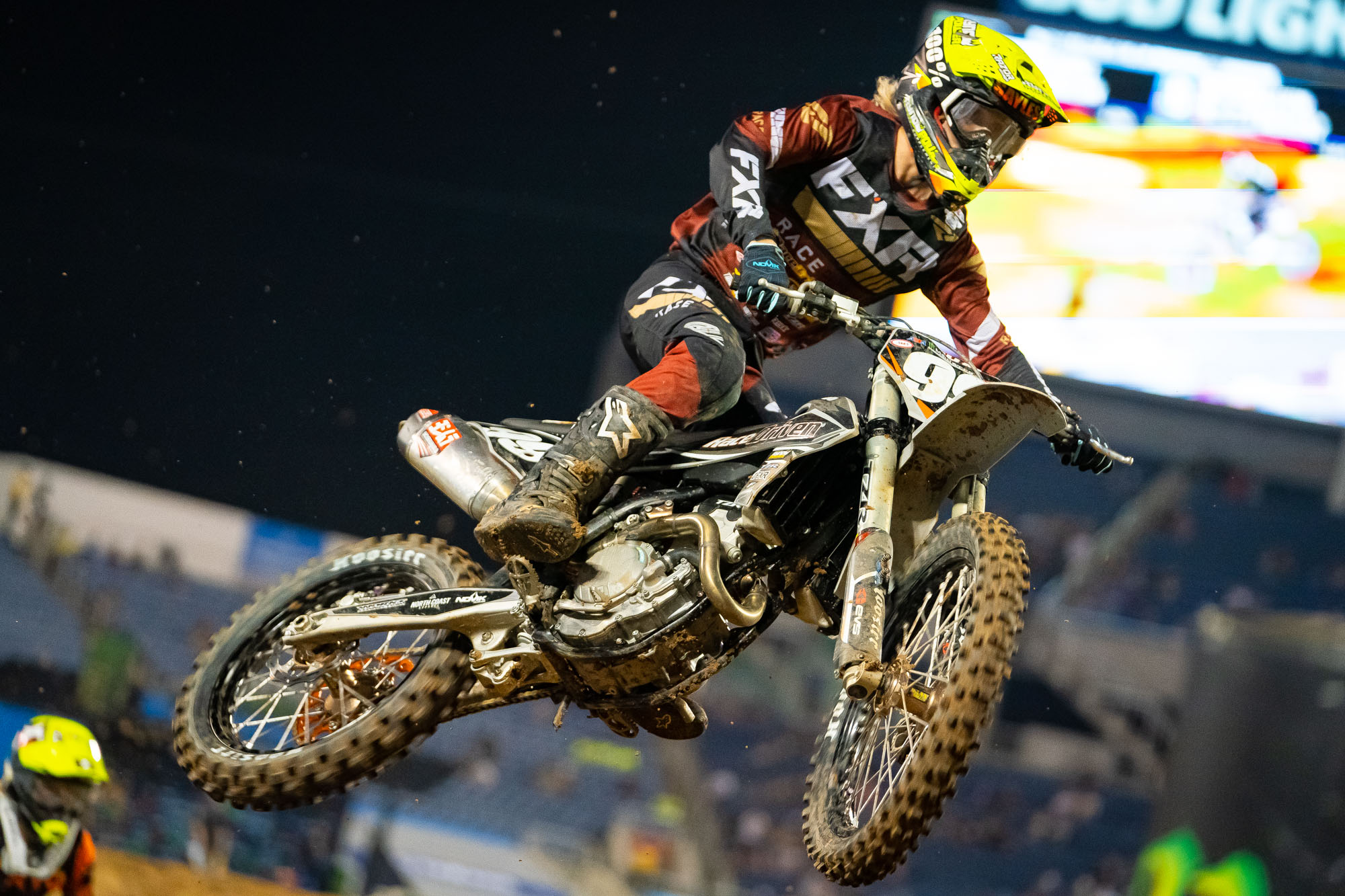 The 2021 Monster Energy Supercross Series will go down as one of the best years in the sport’s history thanks to days like the 2021 Orlando One Supercross. After six races in climate controlled venues, riders were thrown an added obstacle when a morning storm soaked the track at Camping World Stadium. Although the race wasn’t the mudder that many feared, the track was far from a perfect and forced riders had to manage their pace on the slick Florida clay, follow the few shallow grooves cut into the surface, make the most of the passing opportunities, and avoid mistakes during long motos.

Cooper Webb and Jett Lawrence came out on top in their respective Main Events. For Webb, this was a much-needed victory and he shrank Ken Roczen’s advantage in the 450 Class championship points. For Lawrence, this was a nice last boost of confidence going into the 250 East Coast’s extended break, while Colt Nichols and Christian Craig continued a run of podium finishes in their pursuit for the regional title.

As the first race in Orlando left the gate, Colt Nichols was off to the early lead with Jo Shimoda trailing. Privateer Camporese sat in third place, with Grant Harlan just behind as the race went on. Up front, Shimoda wasn’t letting Colt out of his sights just yet, as he stayed within a second of the points leader. Grant Harlan then made the pass for third place on Camporese. As the race neared an end, Colt Nichols sat comfortably out front with over a 6-second lead on Jo Shimoda in second place, who had another 6 seconds of cushion on third place. After once running in third place, Comporese found himself in ninth place at the end of the heat race, fighting for the final transfer position into the main. As the checkered flag waved, points leader Colt Nichols continued his dominant ways and snagged another heat race win.

When the second 250 heat race left the gate, Sanford snagged the holeshot after a great start, but Mitchell Oldenburg quickly passed into the lead following the holeshot line. A few sections later, Christian Craig flew through the whoops and into the lead as he passed Oldenburg. Just a lap later, Craig went down hard after shorting the triple while leading and looked to have hurt his wrist, ending his heat race. That incident handed Jett Lawrence the lead, who had four Honda’s trailing over 5-seconds behind him. Back in the pack, Thomas Do made a pass on Fleming and then immediately challenged Sanford for fourth place. Do ultimately made the pass on Sanford and Joshua Varize followed, as he passed Sanford for fifth place just after. Jett Lawrence took the heat race win with dominance.

Notes before gate drop: Christian Craig had his hand wrapped and lined up for the LCQ despite being in a great amount of pain.

When the 250 LCQ left the gate, Simonson was off to the early lead but Christian Craig quickly passed into the lead before the group completed their first lap. As Craig continued to build his lead, Simonson remained in second place with a few seconds on third and fourth. Nagy made the pass for third place on Meshey, Harriman lurked in fifth place just one spot out of a transfer position. Christian Craig took the LCQ win despite racing with an injured hand.

As the 250 Main Event left the gate, Jett Lawrence was off to the early lead with Colt Nichols just behind. Christian Craig sat in fifth after the field crossed the holeshot line but quickly passed into third place. Jo Shimoda and Mitchell Oldenburg battled their way through the pack together, as they reeled in and passed Moranz for fourth and fifth place. Meanwhile, the top-three already opened up over a 7-second lead on fourth place and it’s new holder, Jo Shimoda. Jett Lawrence continued to lead Colt Nichols, but Colt was slowly reeling in the Honda rider. Just as Colt started pressuring Jett for the lead, Nichols hit a kicker before one of the supercross triples that forced him to only double the triple. Grant Harlan went down in the whoops after running just outside of the top-10. As the main event neared its end, Colt Nichols continued to eat up Jett’s lead. However, Jett Lawrence did what he had to do to keep a necessary cushion on the points leader and took the first win in Orlando. Christian Craig finished up third and kept his points loss to a minimum after what was looking to be a devastating night to his championship hopes. 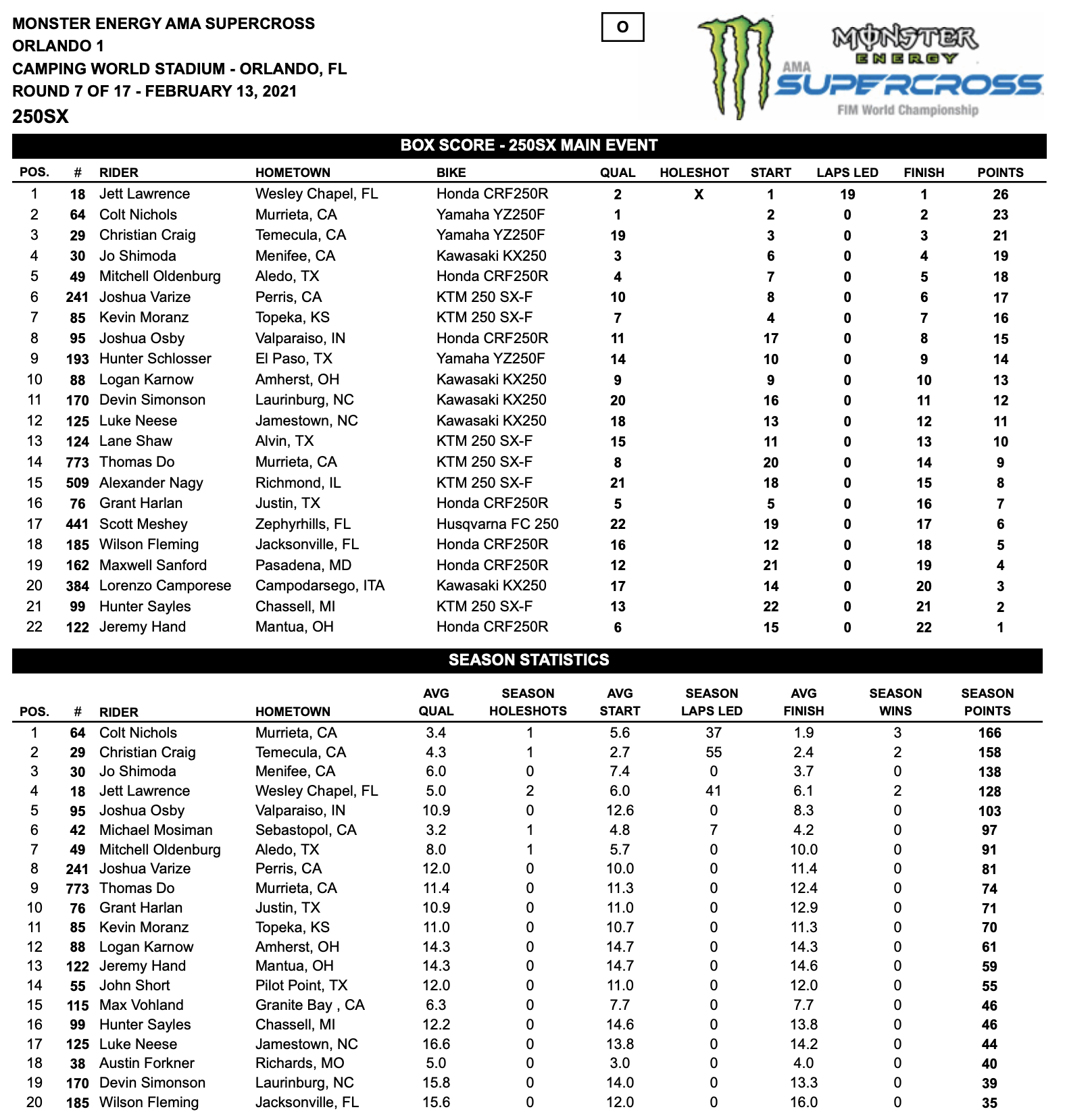 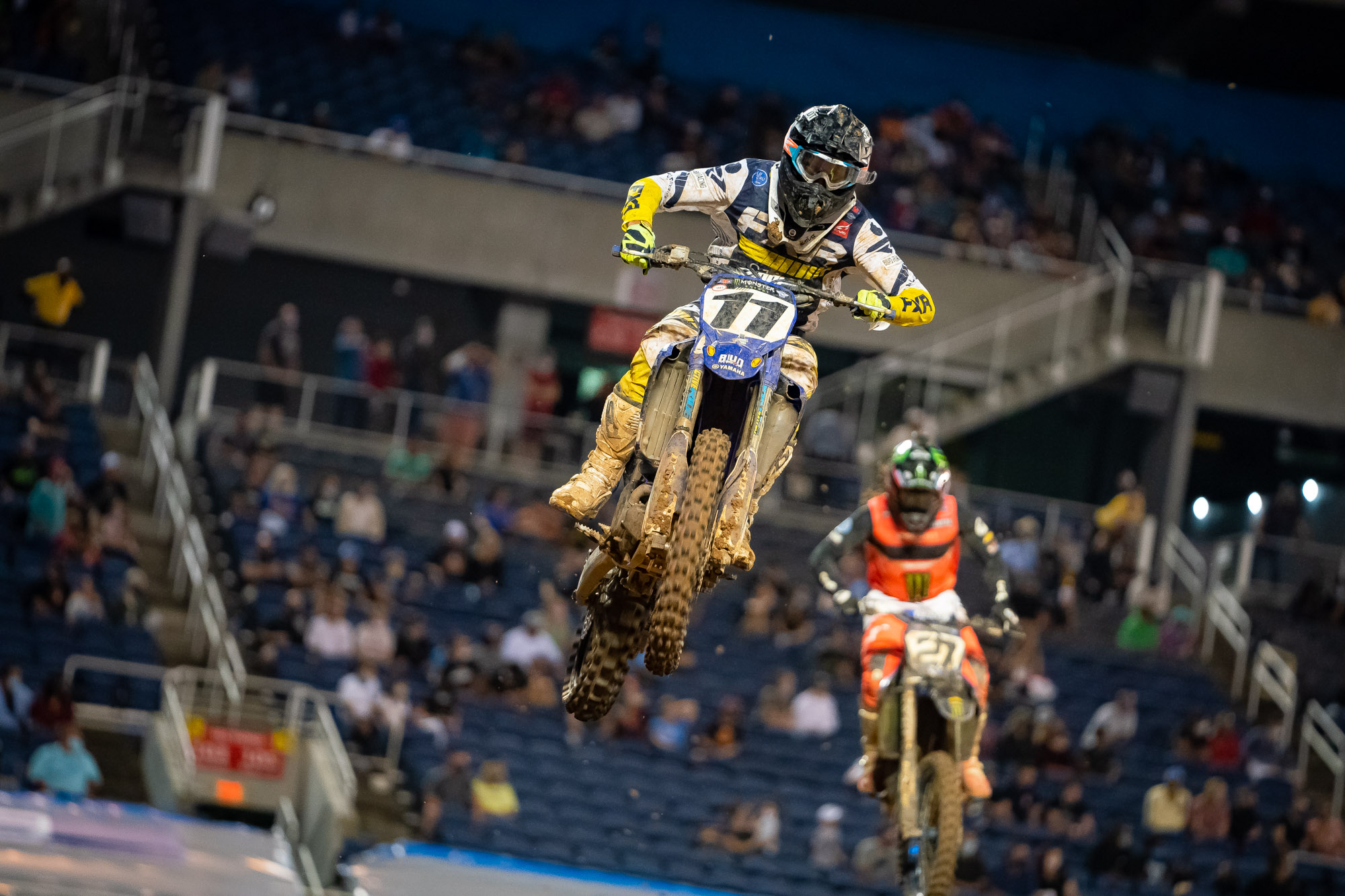 As the first 450 heat left the gate, Shane McElrath was off to the early lead after a great start in his first 450cc race. Eli Tomac trailed in second place, with Marvin Musquin in third. As McElrath continued to lead, Cooper Webb sat in eighth and was stuck battling for positions inside the top-10. As the clock neared the 2-minute point, Eli Tomac began pressuring McElrath for the lead but Shane wasn’t giving in. Eli Tomac swept inside of Shane and jumped into the lead after spending a majority of the race trailing the MCR rider. A few spots back, Martin Davalos and Joey Savatgy battled for the fourth place position, but as Joey seemed to secure the spot, Cooper Webb closed in on Davalos. However, Webb would run out of time and come just short of making the pass. As the checkered flag waved, Eli Tomac snagged the first 450 heat race win of the night.

The second 450 heat was off and Ken Roczen was off to the early lead with Adam Cianciarulo just behind. MCR teammates Broc Tickle and Vince Friese got great jumps off the gate and sat third and fourth early-on. After Anderson passed into third place, Vince ran in fourth place but Justin Barcia sat just behind him and had the faster pace. As Barcia struggled to find a spot to pass Friese, Malcolm Stewart closed in on the pair. Justin Barcia finally made the pass on Vince, but sat 6-seconds behind Anderson in third. Jason Anderson was also making moves, as he jumped to the inside of Adam Cianciarulo and into second place. Anderson then set his sights on Roczen in the lead. A few spots back, Stewart made the pass on Vince for fifth place, just before Osborne, Plessinger, and Ferrandis moved in on Friese. As the checkered flag waved, Ken Roczen took the heat race win after a perfect performance. .

As the 450 LCQ left the gate, Kyle Chisholm was off to the early lead with Justin Starling just behind. Dean Wilson started in third but quickly passed Starling for second place and began pressuring Chisholm. After about two laps, Wilson jumped around the outside of Kyle and made the pass for the lead. Meanwhile, the night was over for Adam Enticknap and Tyler Bowers as they were involved in a crash at the beginning of a rhythm lane. Broc Tickle was buried deep in the pack after a rough start, but continued to battle towards Noren who held down the final transfer position. However, Tickle ran out of time and was unable to make the pass on Noren before Dean Wilson took the checkered flag and the LCQ win.

The gate was down for the 450 main event and Zach Osborne was off to the early lead after a great jump out of the gate. Justin Brayton ran in second place with Ken Roczen just behind in third. Cooper Webb was on Roczen’s rear wheel in fourth place and not wasting anytime, as he went for a pass early on but was unsuccessful. Osborne got out of shape in the whoops while leading and allowed both Brayton and Roczen by. And just like that, Justin Brayton was leading with Roczen in second place and Ken Roczen in third. Dylan Ferrandis went down hard, ending his night. Moments later, Cooper Webb went from third place to first in one section as he jumped past both Roczen and Brayton. Justin Barcia joined the party, as Brayton got shuffled back to fifth place. Joey Savatgy was running in sixth place, but while being pressured by Eli Tomac, Joey endoed into the corner and tipped over. A few laps later, Tomac made the pass for fifth on Brayton. Malcolm Stewart was running in seventh place with Anderson and Musquin trailing, but the Yamaha rider made a mistake through the rhythm lane and slowed momentarily, allowing Marvin and Jason to make their advances. Aaron Plessinger then made the pass on Stewart a few laps later for ninth.

Back up front, Cooper Webb continued to lead Ken Roczen, but Justin Barcia lurked just a few bike lengths behind. While running in third, Barcia got sloppy through the whoops and jumped off his bike. However, Justin kept his hands on the bars, hopped back on his bike, and continued on  after Osborne went by. A few laps later, Justin Barcia dove to the inside of Osborne and went for a pass for third but was unable to complete it. As the checkered flag waved, Cooper Webb took the first race win in Orlando. 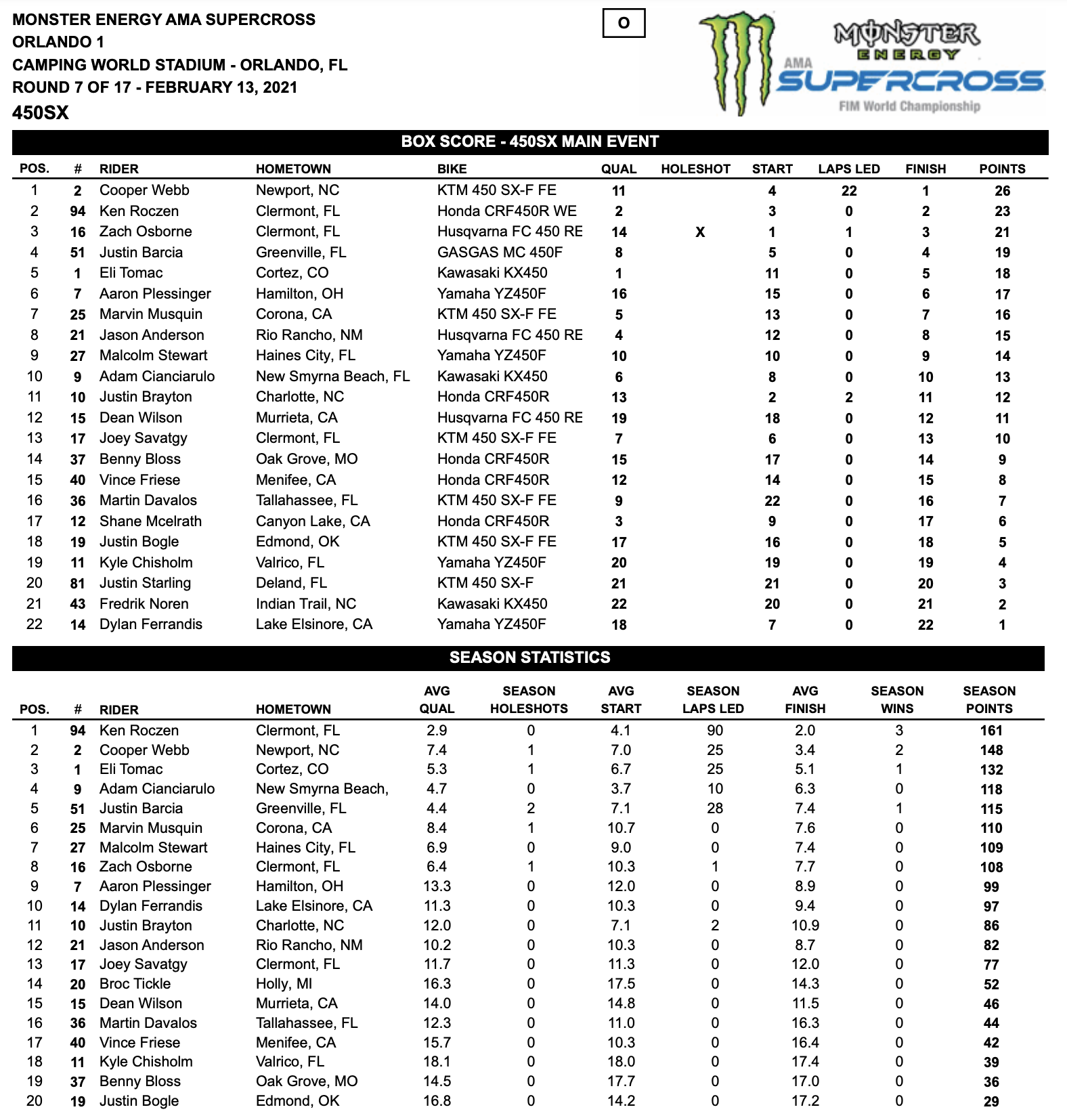