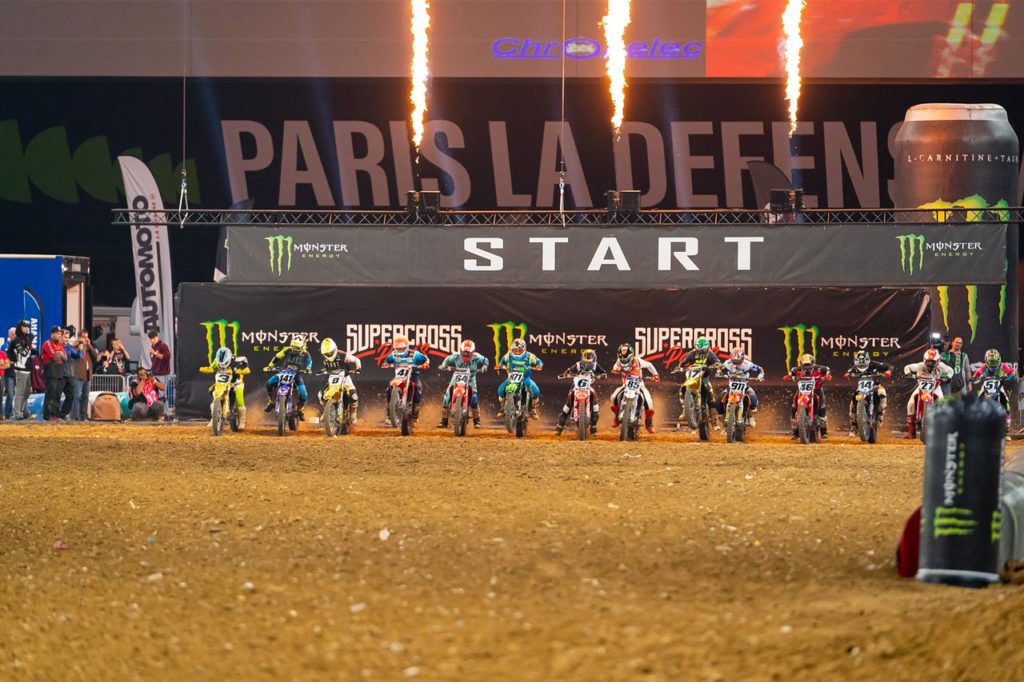 UPDATE OCTOBER 21 | The Larivière Organization sorted out a replacement plan for the 2021 Paris Supercross, extensive changes that will see the race as a one-day event in late November and with a robust rider roster. The new date will be Saturday, November 27, with on-track action at the La Defense Arena happening during the afternoon hours (2-6 PM local time in Paris).

Race organizer Xavier Audouard confirmed to France’s Moto Verte that restrictions on US-Europe travel were the leading cause of delay, saying, “…the drivers, engaged in a very physically demanding championship with a very tight schedule, simply did not get vaccinated, for fear that it would affect their performance.” France currently requires incoming travelers from the US to be fully vaccinated against COVID, an issue that resulted in Team USA’s absence from the Motocross of Nations.

“Unvaccinated people arriving from a country at risk now had to stay eight days in quarantine in a hotel, and 95% of American pilots, including the few that we had already announced, were not vaccinated (they are not, moreover, the vast majority still not),” continued Audouard. “It was at this point that cancellation first became inevitable. Athletes of this level will never agree to spend eight days at the hotel without seeing anyone. And without pilots, we cannot organize an SX.”

With support from the French Motorcycling Federation, the promoters were able to get an exemption that classifies the Paris Supercross as a “Major Sporting Event” that benefits from participation by international athletes. As a result, riders from the US will be allowed to travel to France, regardless of vaccination status, but must follow a sanitary protocol.

The challenges and changes caused Cooper Webb, Jett Lawrence, and Hunter Lawrence to drop out of the race (the trio was billed as the star talent over the summer), but it allowed Audouard and the Larivière Organization the chance to hire a dozen riders for the weekend.

Audouard outlined the situation’s complexities in the Moto Verte interview and explained how the replacement date became available, finding riders, the switch to the one-day afternoon format, and the importance of holding the event at all. “The French school of Supercross is a reality that has translated into titles at the highest level. The cradle of this school is the Paris Supercross. It is a national monument, which deserved to be defended like a fortress and to be fought for,” he stated. “Otherwise, the entire French SX industry was in danger of disappearing. The risk still exists, moreover, if the whole edifice does not stick together, from the organizers to the partners, to the pilots and to the fans themselves.”

Below is the full press release from the Paris Supercross promoters…. 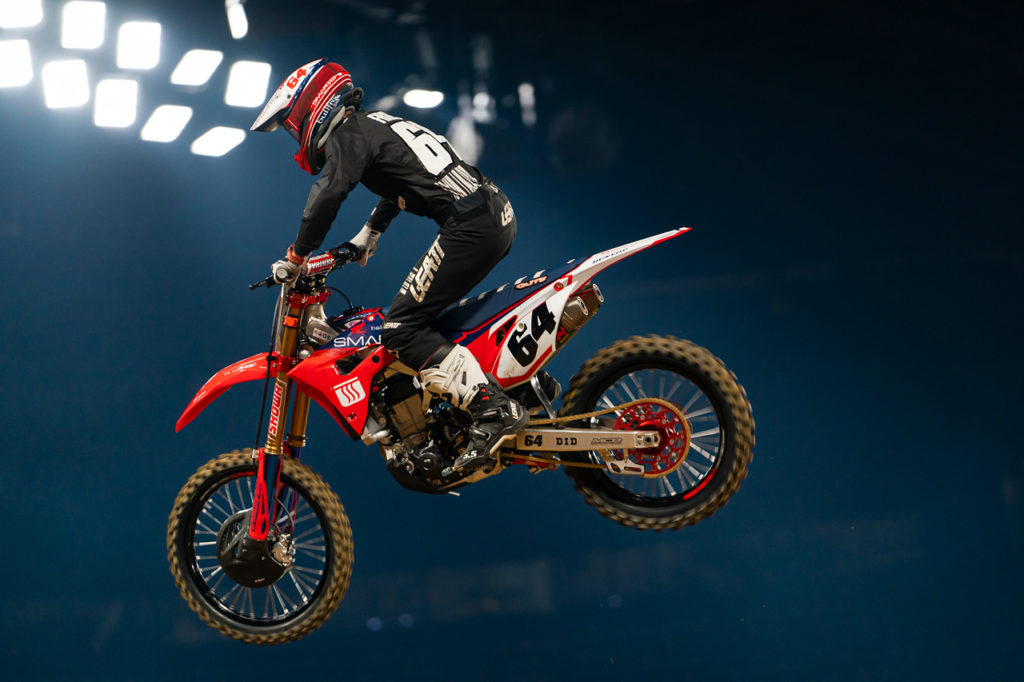 The 2021 edition of the Paris Supercross will finally take place on Saturday 27 November, over a single day, from 2:30 p.m. to 6 p.m., at Paris La Défense Arena, the formidable and ultra-modern setting that it inaugurated in 2017. Who will find- you track for this 38th unpublished edition, original but looks oh so exciting? The answers below!

The leader of the contingent from America will naturally be Marvin MUSQUIN, double King of Paris, winner of the penultimate SX of the 2021 season and second in the final of the same season. The KTM-Red Bull rider will be the logical favorite but, through a pattern of races favoring twists and turns (two “sprints” and a final which each award the same number of points), he will necessarily be wary of the greatest specialist in winter SX under all latitudes, ex-King of Paris himself and multi-winner in Geneva and Australia, Justin BRAYTON.

Ditto for Chad REED, the legend of the US SX with an incomparable track record, absent from the 2021 “covid” season but still working and which is announced as formidable on the training circuits! Solid outsiders like Justin BOGLE (ex-SX250 champion and rival of Marvin the year he won his title in this category), Ryan SIPES, Josh HILL, Alex MARTIN, Cole SEELY or the reigning SX champion of Canada, Dylan WRIGHT, will complete this “North American” contingent.

The GP drivers to have taken up the challenge are not the least since the legendary Antonio CAIROLI (the most successful driver in activity) will very probably make his last appearance in the race in Paris! Romain FEBVRE, the only French MXGP World champion and still fighting for the 2021 title after his brilliant performances in Lacapelle (2 nd ) and in Spain (victory of a round a few days ago), will be the natural co-leader of the Team France for the traditional France-USA-Rest of the World challenge which spices up the great Parisian classic.

The gang of leaders of the SX Tour will of course be there with the traditional leaders of the European SX Maxime DESPREY (former Prince of Paris and double champion of France MX / SX 2021), Cédric SOUBEYRAS, Thomas RAMETTE, Greg ARANDA, Anthony BOURDON and Adrien ESCOFFIER.

All eyes will of course be on Maxime RENAUX, the dominator of the 2021 MX2 World Cup, who will come without pressure to try his hand at SX against a squadron of wild cards from the USA: Vince FRIESE who goes down in 250 for next year , Kyle PETERS undefeated in Arenacross US 2021 (20 wins!) And the very fast Ty MASTERPOOL. Bud Racing, the traditional partner of this 250 category in Paris, will rely on its house “wild cards”, namely Quentin PRUGNIERES and the very promising Belgian twins Lucas and Sacha COENEN.

The usual protagonists of the SX Tour SX2 championship, who will compete in this international context for the final of their championship, will not be taken lightly, in particular the favorite for the title, Julien ROUSSALY but also Calvin FONVIEILLE, the experienced Arnaud AUBIN or obviously the reigning Prince, Brian HSU, still formidable in Paris.

The FMX field, currently being finalized, will be based on the legendary Australian Josh SHEEHAN, multi-medalist at the X-Games and RedBull X-Fighters (which means that there will be double backflip in the air), the no less legendary Spanish Maikel MELERO, triple FMX World champion (and front flip specialist…) and the equally legendary Helvetian Matt REBEAUD, the biggest winner of the world FMX, riding his Alta Red Bull! Nicolas TEXIER, faithful to the event, will give the hexagonal response to this foreign cohort!

OCTOBER 19 | After weeks of effort and planning, the Larivière Organization has announced a postponement to the 2021 Paris Supercross. The thirty-eighth running of the famed offseason event was initially scheduled to take place on November 6-7 at the La Defense Arena in metropolitan Paris with a rider roster that includes Cooper Webb, Justin Brayton, Jett Lawrence, and Hunter Lawrence. However, ongoing restrictions, including a command that requires all travelers arriving in France from the US be fully vaccinated for COVID-19, have forced the promotion group to push the race date back indefinitely and perhaps even alter the event format.

“In circumstances made particularly difficult by the health crisis and its consequences on international travel, in particular from the United States, the Larivière Organization teams have moved heaven and earth to keep this edition as it was scheduled for these dates,” read the group’s Tuesday press release. “Unfortunately, despite all its efforts, Larivière Organization deplores that these dates have become untenable and apologizes to its loyal visitors for the inconvenience caused by this change.”

The Larivière Organization spent much of the past year hyping the return of the Paris Supercross after it was canceled entirely in 2020, a first for the event (the 2015 race in Lille occurred less than 24 hours after terror attacks in Paris). All of the necessary things seemed to line up early in the year, so when it came time to drum up ticket sales, the promoters committed to having 450 SX champion Webb, offseason SX expert Brayton, and Team Honda HRC’s Lawrence brothers on the starting line. 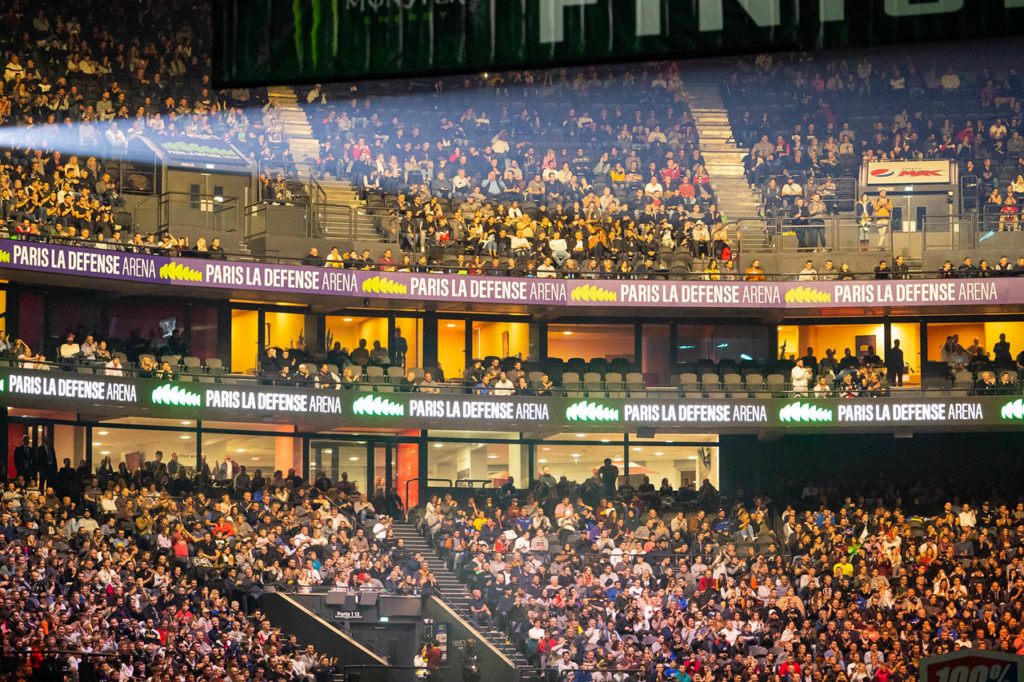 Complications regarding international travel arose late in the summer, and when vaccination requirements for entry into Europe kept Team USA from attending the Motocross of Nations, a similar outcome seemed likely for the Paris Supercross.

We heard the race was on the ropes in September, particularly after several riders expressed concern when the rumor of a vaccine being necessary for domestic competition in the Monster Energy Supercross Championship circulated, but that every effort was being made to go forward.

The United States is currently on France’s “Orange List,” which requires all incoming travelers from the US be vaccinated for arrival. There are a few small loopholes into this rule, including the possibility for the unvaccinated on “essential purposes” to visit France, only if approved by the government and after a mandatory seven-day isolation.

One motivating factor was the worry that canceling the race two years in a row could make it difficult to host in the future at all and that sentiment appears in the postponement announcement, “The Paris Supercross teams have decided not to give up and are working hard to be able to offer their public of connoisseurs a sporting spectacle worthy of their prestige, at the cost of a delay of a few weeks and a redesigned format,” stated the Larivière Organization. “Ticket holders will need to do nothing at this stage and Larivière Organization makes every effort to communicate the details of this 38th edition in the coming days to the traffic and European fans. The terms of repayment/postponement will be communicated at the same time.”

Bummer. Looks like @gmarchbanks36 is out for the day. | #swapmotolive #sml #supercross ...