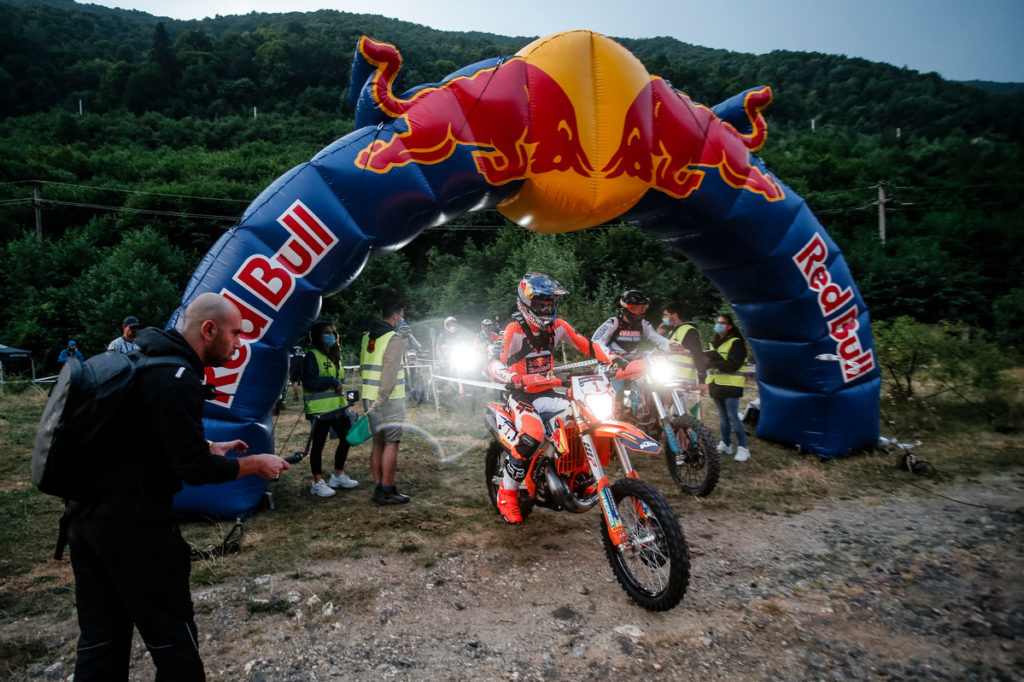 The FIM Hard Enduro World Championship continues with one of the toughest, longest events of the season, the 2021 Red Bull Romaniacs. Riders will spend five days traversing the rocky and hilly terrain of Sibiu, Romania, competing in what’s considered to be the hardest of all the Hard Enduro events.

Red Bull’s coverage of the event is underway and after three days of competition (one Time Trial and two full Off-Road runs), we can see who the front-runners are for the win.

With anticipation high, the opening day of competition was an early one as competitors tackled an 18-kilometre-long Time Trial Qualification. With the results determining the starting order for tomorrow’s Offroad Day 1 – the first of four offroad days – a strong result would pay dividends.

Race winner in 2020, Red Bull KTM Factory Racing’s Manuel Lettenbichler led the Gold class away, but an early fall put him on the back foot as Young put the power down from the off. Fastest through the first checkpoint, he kept that momentum rolling to the finish line and claimed a healthy 19-second win after 37 minutes of racing.

Bulgaria’s Teodor Kabakchiev produced one of the day’s surprise results with the second-fastest time. Kabakchiev finished eighth in 2020 but is already showing he wants more in 2021. Starting third on the road, Gomez was a little sluggish to settle in coming through checkpoint 1 in 12th, but he soon turned that around by jumping to third overall at the finish.

Hampered by that early fall, Lettenbichler regrouped from eighth at checkpoint 1 to claim fourth, while GASGAS Factory Racing’s Taddy Blazusiak put in a consistently solid ride for fifth, edging out Graham Jarvis (Husqvarna) by one second. Canada’s Trystan Hart was the top-performing rookie of the day, with the KTM rider claiming seventh. Abestone Hard Enduro winner Billy Bolt (Husqvarna) didn’t have the best outing in 10th, with Mario Roman (Sherco) and Jonny Walker (Beta) in 11th and 12th respectively. However, with ground to make up, the trio will be ones to watch for on Offroad Day 1.

Overnight rain and early morning mist made it a tricky start for competitors as the Gold class riders set off into the 116-kilometre-long day. While the drop in temperature was welcomed, the rain would make some of the descents increasingly slippery for those opening the course.

With the top three feeling their way through the conditions, they were soon caught by KTM Factory Racing’s Manuel Lettenbichler. But on corrected time it was Vision Track Beta’s Jonny Walker who was fastest through checkpoint 1. Together with Mario Roman (Sherco) the later start time was playing right into Walker’s hands.

For the first half of the morning the pace was high. A GPS navigational issue just before service dropped Roman back outside the top three. Jarvis began to take the reins out front, setting some of the fastest checkpoint times.

Having shaken off a few mistakes in the morning, the six-time Red Bull Romaniacs winner was now on a charge. Topping three of the day’s final five checkpoints, the Rockstar Energy Husqvarna Factory Racing rider claimed a healthy three-minute-and-29-second margin of victory over Lettenbichler to bump him to the top of the overall standings.

Enjoying a solid ride throughout, Lettenbichler steered his KTM home for second, keeping relatively close to Jarvis. Despite a strong ride exiting the service point, the day didn’t quite go Young’s way and he ended it third, losing nine minutes to Jarvis.

Working their way through traffic from 11th and 12th respectively, Roman and Walker gained the most places on Offroad Day 1. Walker edged out Roman, jumping from 12th to fourth, with Roman taking fifth, just 25 seconds behind the Beta rider in the overall standings.

Offroad Day 2 marks the beginning of the all-important marathon stage. Competitors will end the day in the forest where no outside assistance is allowed. Remaining fast, but preserving both rider and machine, will prove crucial in order to enjoy a relaxing night under the stars!

Offroad Day 2 was an eventful one for round four of the FIM Hard Enduro World Championship at Red Bull Romaniacs with Manuel Lettenbichler (KTM) winning to take over the race lead. Graham Jarvis’ (Husqvarna) hopes of a seventh race win ended when he failed to finish due to a knee injury.

The world’s toughest hard enduro rallye marched on for Offroad Day 2, putting its competitors through the rigours once again. Punishing uphills and hot weather were all capped off in true rallye style with riders now facing a night in a tent, with no outside assistance or support allowed.

Race leader at the close of Offroad Day 1, Graham Jarvis led the Gold class riders away before dawn at 06:45. The Rockstar Energy Husqvarna Factory Racing rider was followed by Red Bull KTM Factory Racing’s Manuel Lettenbichler. Immediately hot on Graham’s heels, Mani quickly ate into the Brit’s lead, catching him just after the first major climb of the day.

In a game of cat and mouse, neither could shake off the other, and so rode together for most of the day. However, the event turned on its head for Graham as he exited the final service point. A high-speed ditch crossing saw him twist his knee, and with the pain too much, he was forced to call it a day, allowing Manuel to ride clear for the win.

That victory proved decisive, with the German jumping out to a 23-minute-plus race lead over Sherco Factory Racing’s Wade Young. While Young takes second in the overall standings, it was his teammate Mario Roman who ended Offroad Day 2 in second. A consistent and solid ride from the Spaniard paid off, as he moves into third in the overall standings.
Finding his Red Bull Romaniacs rhythm, Billy Bolt (Husqvarna) also had a memorable day. Taking the ‘less is more’ approach, the Abestone Hard Enduro winner limited his mistakes compared to the previous days, riding his way up to third. He now moves up to fourth in overall classification with two days to go.

One of the performances of the day came from Canada’s Trystan Hart (KTM). The rookie is rapidly finding his feet in the steep trails of the Carpathian Mountains, ending his day sixth, to hold seventh overall in classification.

With an overnight bivouac awaiting riders at the end of Offroad Day 2, competitors won’t see their assistance teams until the service point, midway during Offroad Day 3.