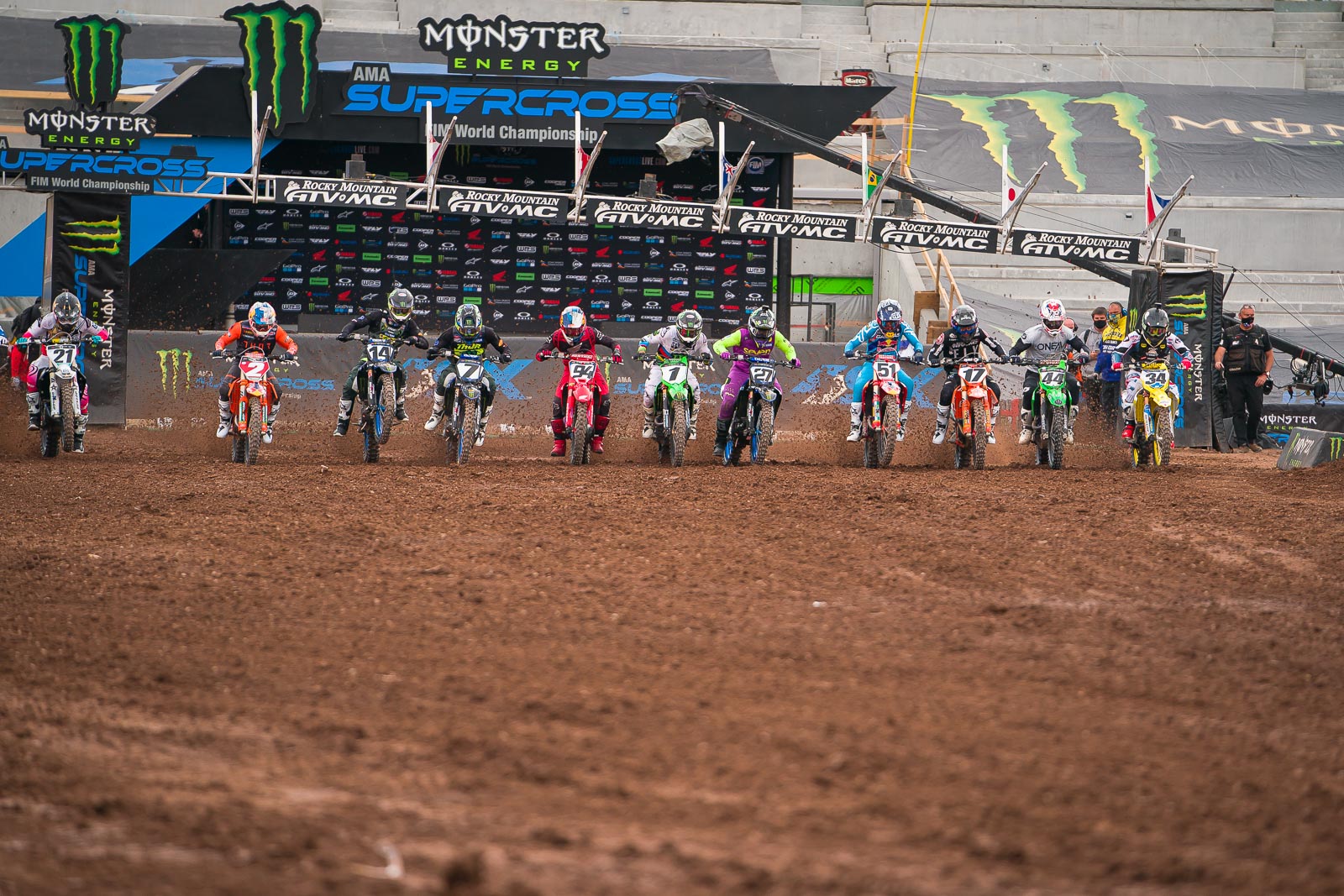 Timed Qualifying has come to a close at the 2021 Salt Lake City One Supercross, round sixteen of the 2021 Monster Energy Supercross Series. We’re back to “real” Supercross, as the small floor at Rice-Eccles Stadium is a fraction of the size to last week’s races at Atlanta Motor Speedway, and it showed in the lap times during the practice portion of the program. 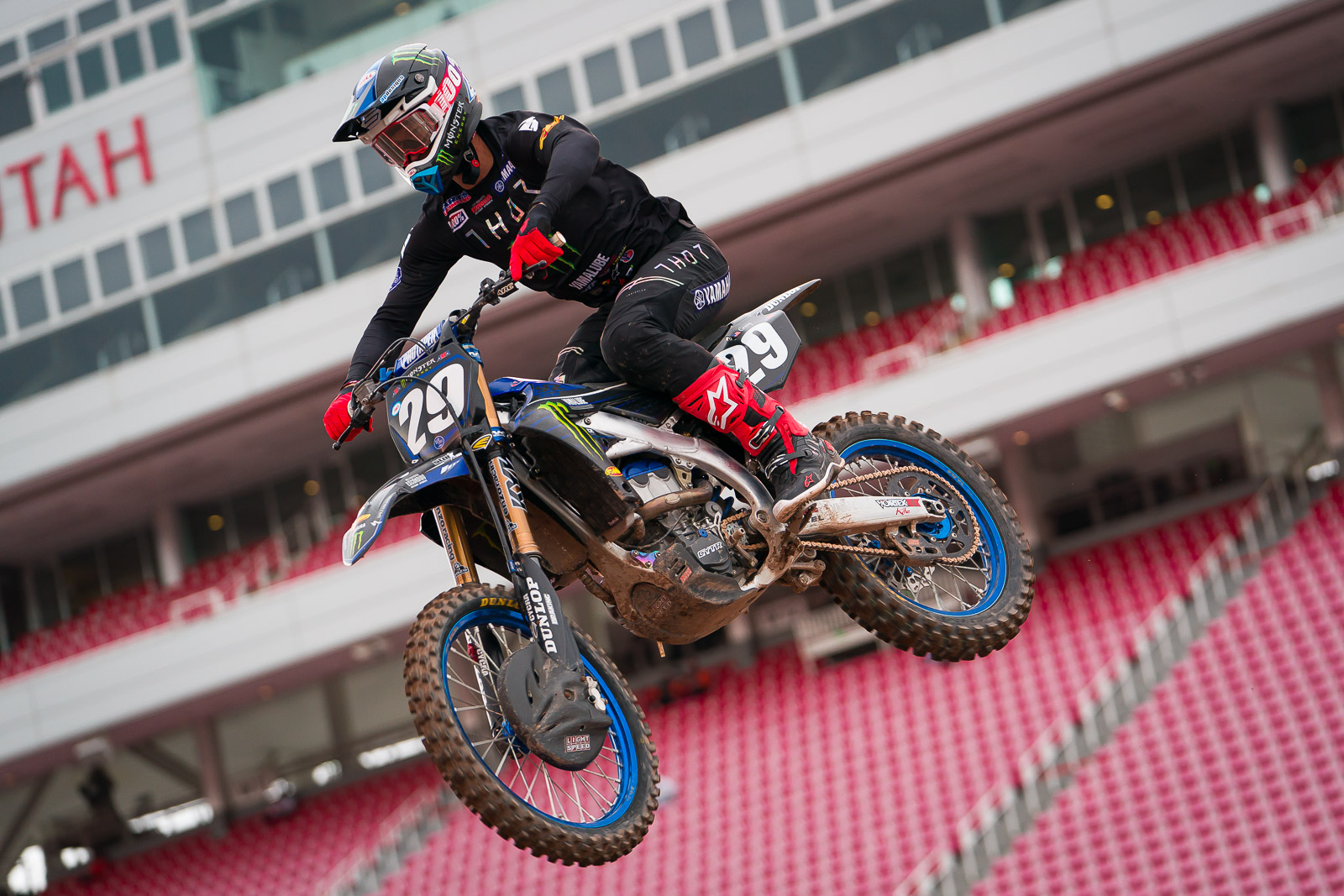 Christian Craig had an eventful afternoon. The Monster Energy/Star Racing/Yamaha rider was at the front of the field every time bikes took to the track on Saturday, and his 47.564 lap in the first Timed Qualifying session was the fastest of the 250 Class. Unfortunately, a hard crash in the final practice left him with what looked to be a lower leg injury. He was taken from the track on the Alpinestars Mobile Medical cart but intends to race tonight. Craig comes into the race down eight points to Colt Nichols in the championship standings and must line up for a chance at the title.

Michael Mosiman has healed up from the hand injury he suffered earlier in the season and made his return to SX in Salt Lake City. The Troy Lee Designs/Red Bull/GASGAS Factory Racing was a surprising second overall on the timesheets, thanks to a 47.750 that he put down early in the afternoon.

Jett Lawrence made a shock change to his Team Honda HRC machine between Timed Qualifying sessions, and the setup change helped him pick up the pace in the final practice. Lawrence was third-fastest in the field with a 47.906 time.

Incoming championship leader Colt Nichols seemed to be playing it safe today. The Monster Energy/Star Racing/Yamaha rider found out how quickly a mistake can lead to a crash during Friday’s motos for the media, and he didn’t seem to push the limit during Saturday’s practices. A 47.954 put Nichols fourth overall.

Jo Shimoda completed the top-five with a 48.332 lap in the first session. The Monster Energy/Pro Circuit/Kawasaki rider was the only person in the 250 Class in the 48-second range.

There were just 26 entries in the 250 Class for tonight’s race, so everyone is in for the night show. 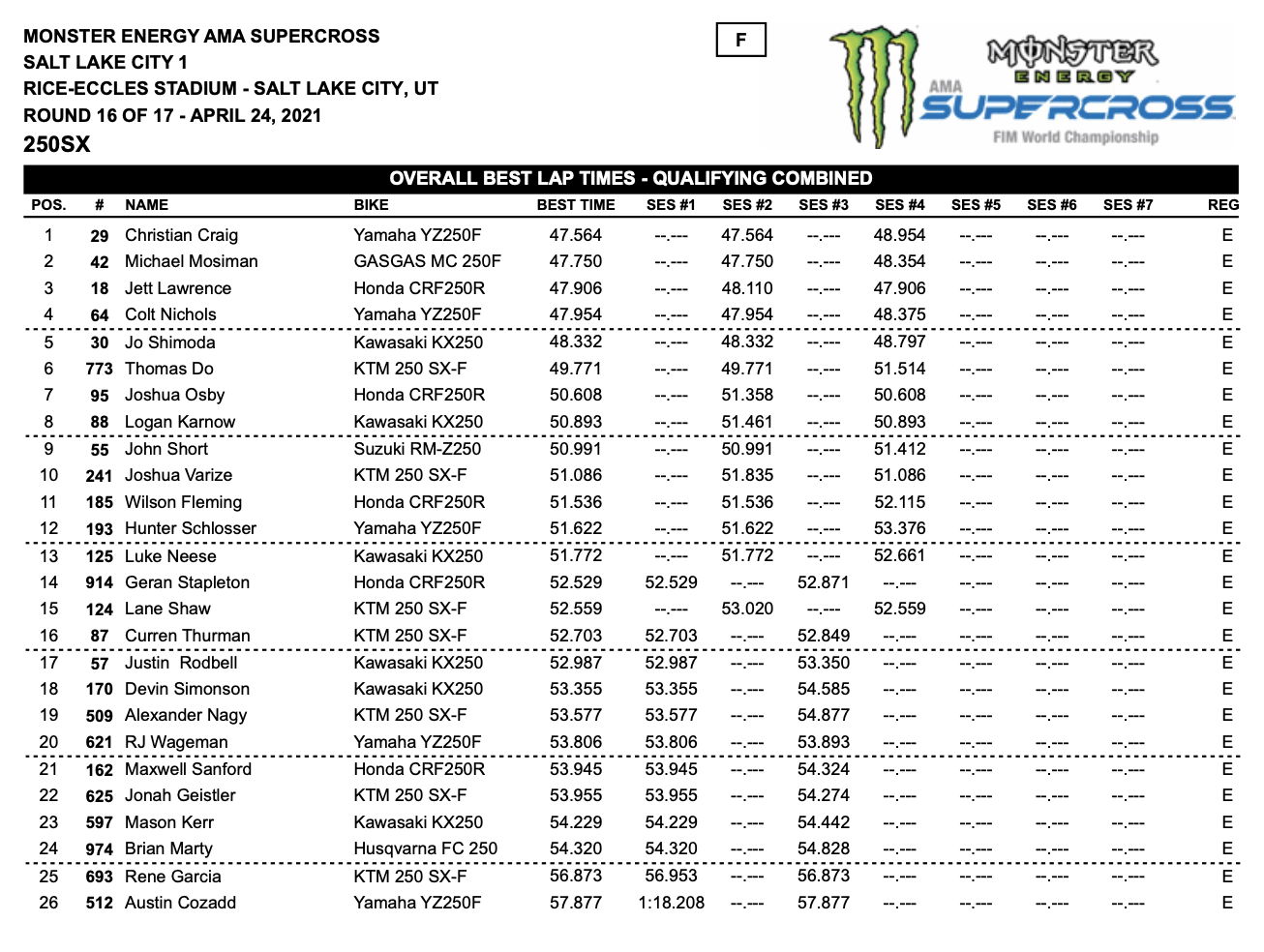 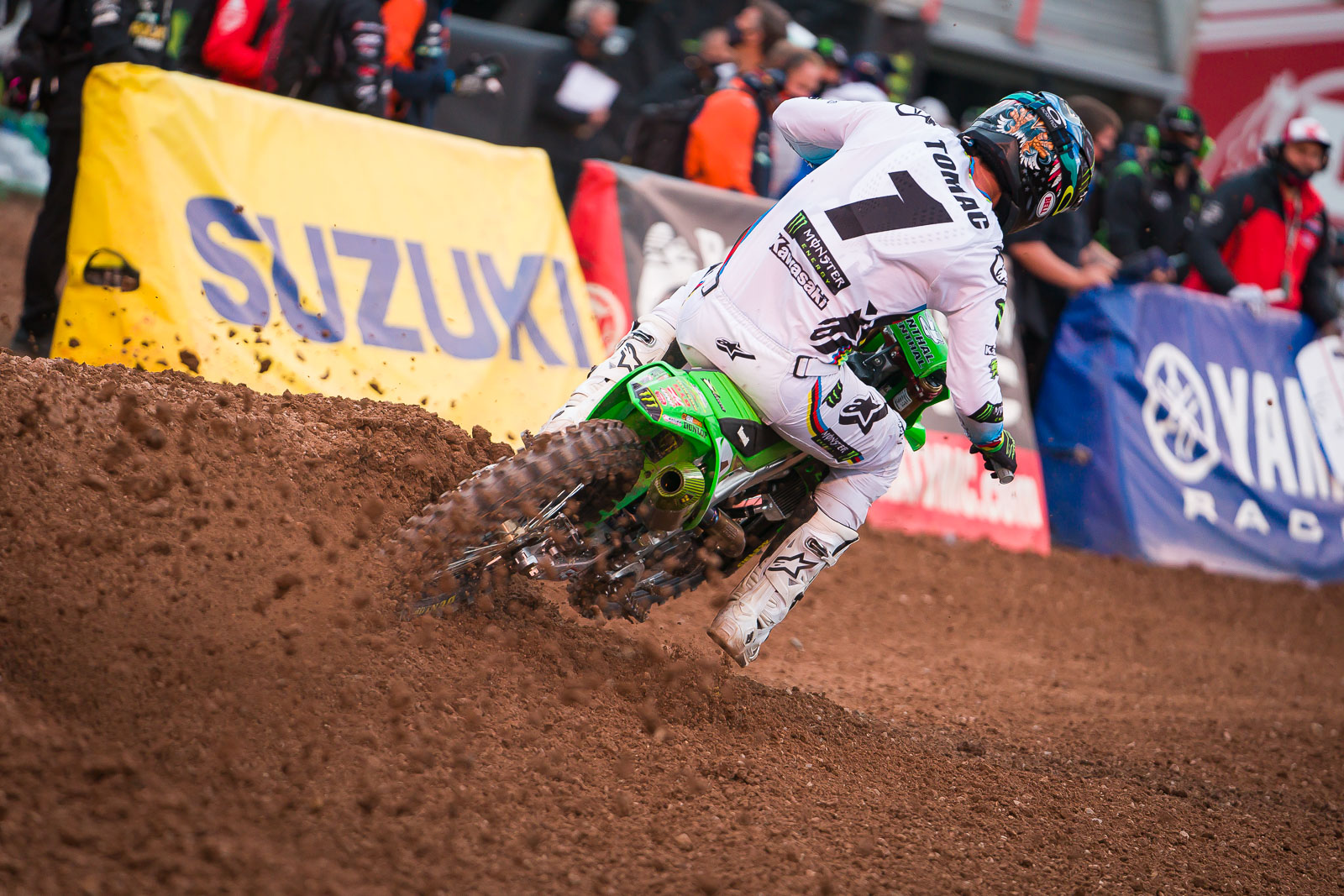 Here’s something that should come as no surprise: Eli Tomac was the fastest rider of the afternoon. The Monster Energy Kawasaki rider put in a 46.980 during the first Timed Qualifying session and was the only person in the entire field to break the 47-second mark. We’ll spare you the explanation of why the altitude and hard pack helped him out…

Cooper Webb comes into today’s race with a chance of clinching the 450 SX title. The Red Bull KTM rider has to have a few things go his way (watch this video for an explanation of the scenarios), but a 47.058 is a sign of his speed. Webb was second-fastest overall in the combined field.

Joey Savatgy and Jason Anderson were separated by just 0.001 seconds on the stopwatch, with Rocky Mountain ATV-MC/WPS/KTM’s Savatgy clocking a 47.171 and Rockstar Energy Husqvarna Factory Racing’s Anderson a 47.172.

Malcolm Stewart rounded out the top-five with a 47.262 on his Monster Energy/Star Racing/Yamaha. Stewart is in the last two races of his Supercross-only contract with the team, so a good result now would be huge.

Chase Sexton was sixth overall, but the rookie rider is questionable for tonight’s race after a hard slam in the final practice session. Team Honda HRC says he will attempt to line up for the Heat Races. 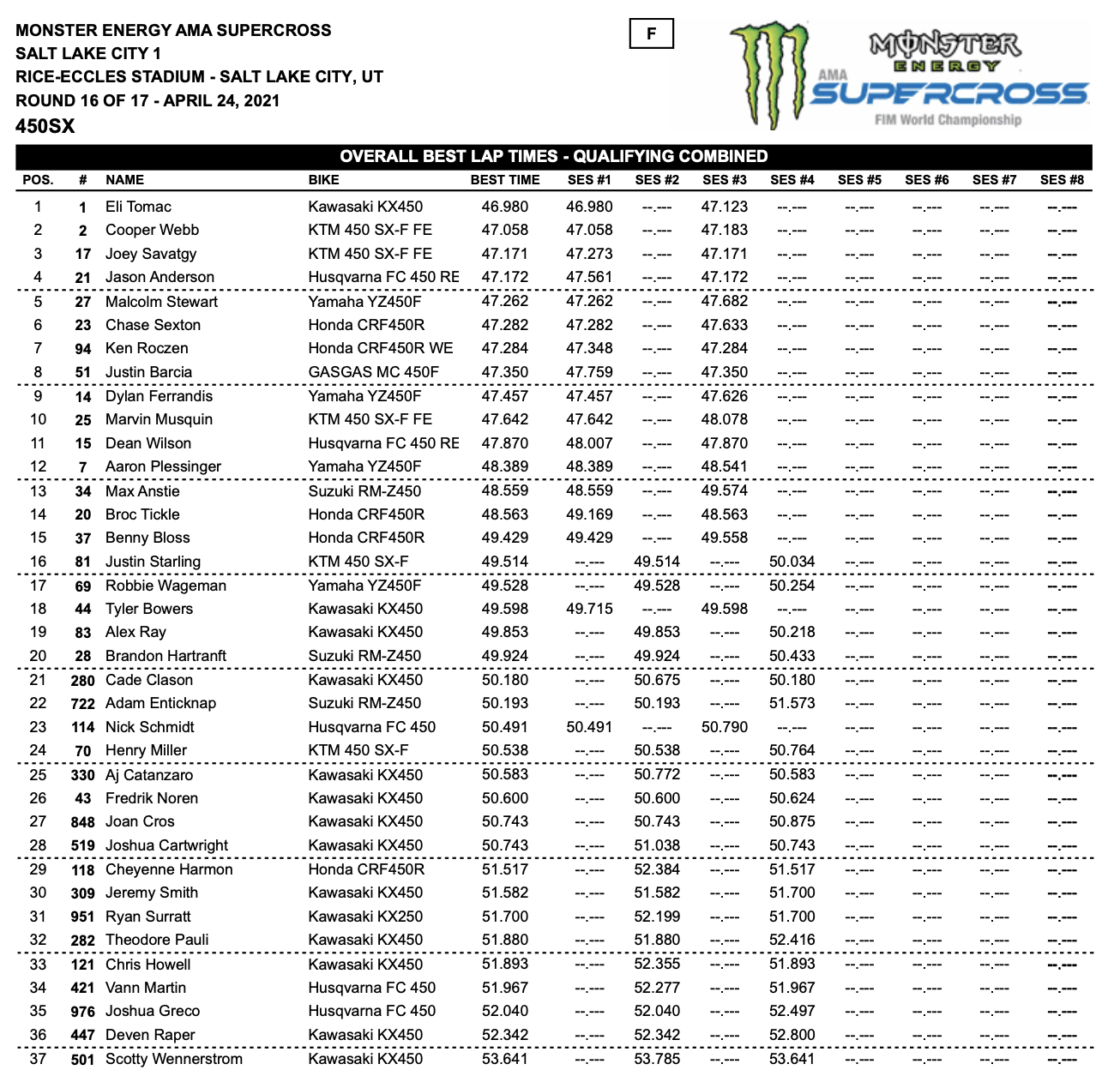