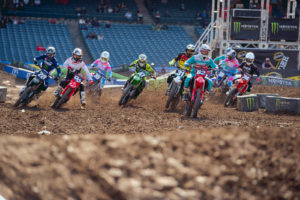 The 2022 Monster Energy Supercross Series is finally, officially underway. The fastest riders in the country spent Saturday afternoon learning the track that fills the floor of Angels Stadium, and to no surprise, the lap times are incredibly close. Fractions of a second split the front-runners in the 250 West Coast and 450 Class on the qualifying sheets, which ratcheted up the anticipation for tonight’s first gate drop even more. 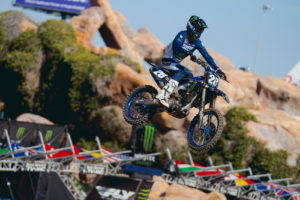 To no-one’s surprise, Christian Craig was the fastest guy in the qualifying sessions. The Monster Energy/Star Racing/Yamaha rider laid down an impressive 57.676 lap time in the first 250 West Coast qualifying session, making him the only rider to dip below the 58-second mark in the first session. Craig then came out in the second session of qualifying and bettered his time by a few more tenths, securing the top-spot heading into the night show.

Michael Mosiman wasn’t far off, as he led the first qualifying session early-on and then joined Craig in the 57-second zone in the second timed session with a 57.685, landing him in the second place position heading into the heats.

Hunter Lawrence was the last to join the 57-second club in the 250cc class, as he logged a 57.947 in the final qualifying session. Seth Hammaker, Jo Shimoda, and Colt Nichols followed closely, sitting within 0.200 of each other on the stopwatch.

Chris Blose had a hard crash in the first timed qualifying session but landed in 14th place on the time sheets. 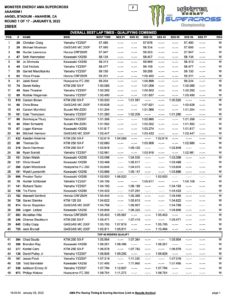 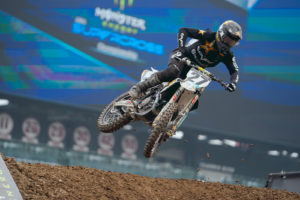 The preseason hype for Rockstar Energy Husqvarna’s Malcolm Stewart was justified in the second 450cc qualifying session, as he topped the times with a 57.216.

Eli Tomac was just behind, as the Monster Energy/Star Racing/Yamaha rider logged a 57.302 just a few laps before the checkered flag waved.

Aaron Plessinger went down hard in the first qualifying session but remounted and logged a 59.644 in the final session of qualifying, landing him in 19th. Obviously that is not where the RedBull KTM rider wants to be, but he’s fortunate to still be lining up after the crash. 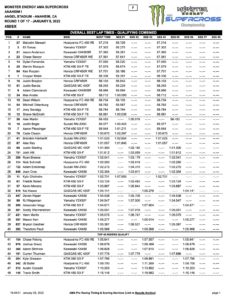