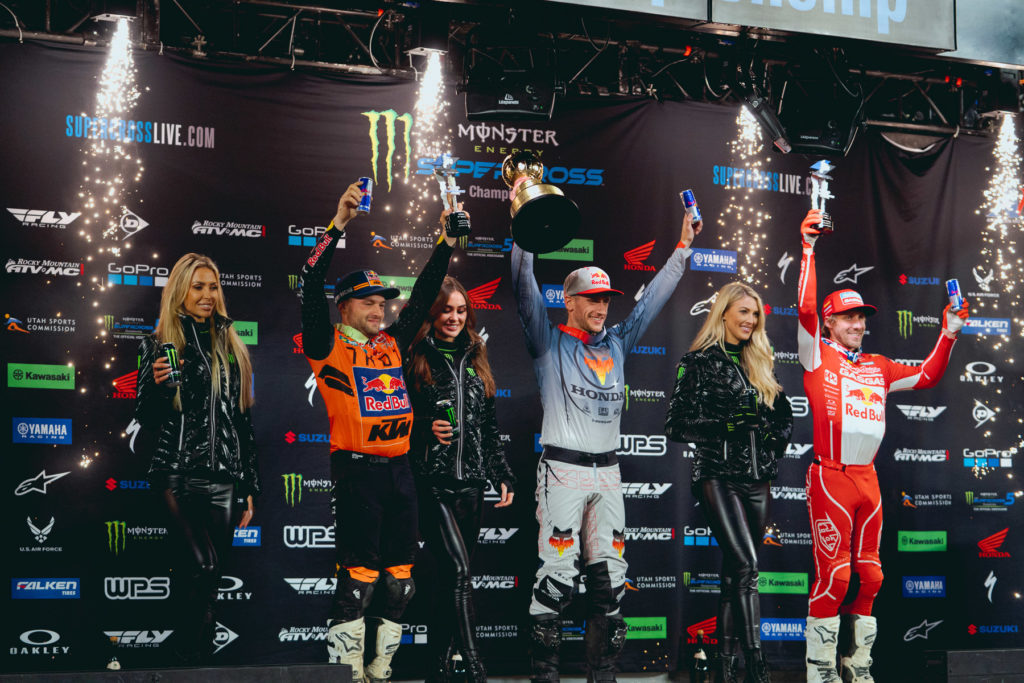 After months of anticipation and preparation, the 2022 Monster Energy Supercross Championship kicked off with the 2022 Anaheim One Supercross, a welcome return to action and the birthplace of the discipline. Riders faced off against each other around a challenging track at Angels Stadium, a layout that most said was choppy, difficult to develop a rhythm on, and left little room for error. A handful of potential front-runners found this out the hard way during the Heat Races, LCQs, and Main Events for the 250 West Coast Region and 450 Class. 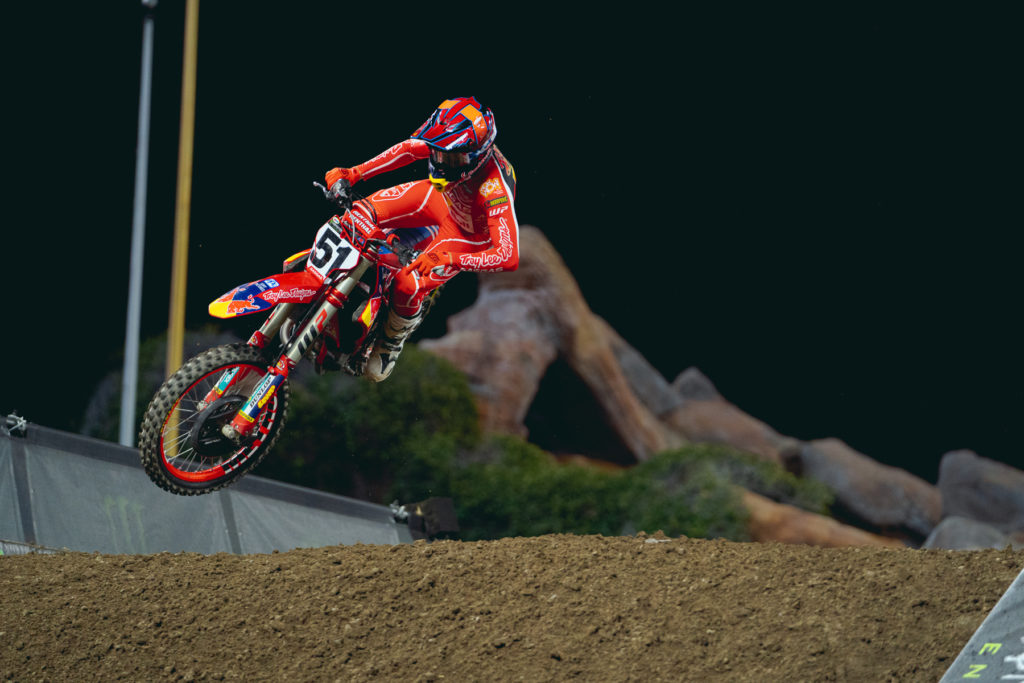 Justin Barcia came into Anaheim as perhaps the most talked about racer. In regards to his series opener winning streak, many believed it was a toss-up whether or not the TLD/Red Bull/GasGas rider could make it four in a row in 2022.

In timed qualifying, Justin Barcia sat just a second off of the fastest lap time. Which may not sound like much, but in a field this stacked, that landed Barcia in tenth place. As for the Heat Race, Justin Barcia improved on his qualifying time and made some passes to secure a fourth place finish before heading to the Main Event.

Justin Barcia wasted no time during the early laps of the Main Event, as he was going for passes and battling with the reigning SX champion. After a few passes, Justin seemed to settle-in just outside of the top-3. As the Main Event went on and events unfolded, Justin found himself slowly improving on his position. And, by the half-way mark, Justin was holding down second place.

As Barcia logged consistent laps while sitting a spot out from the race lead, Jason Anderson began to close-in and challenge for the position. In the matter of a lap, Anderson pulled alongside Barcia in the whoops before taking over second place momentarily, that is, until Justin fired back in the following corner to retake second place after taking Anderson wide.

Shaken up from the collision with Anderson, Justin Barcia mis-timed a key rhythm lane, allowing Cooper Webb to sneak by and take second place. The checkered flag waved a few laps later and though Barcia wasn’t able to make it four in a row at Anaheim, he did collect a third place finish and set himself up for a great season of racing. 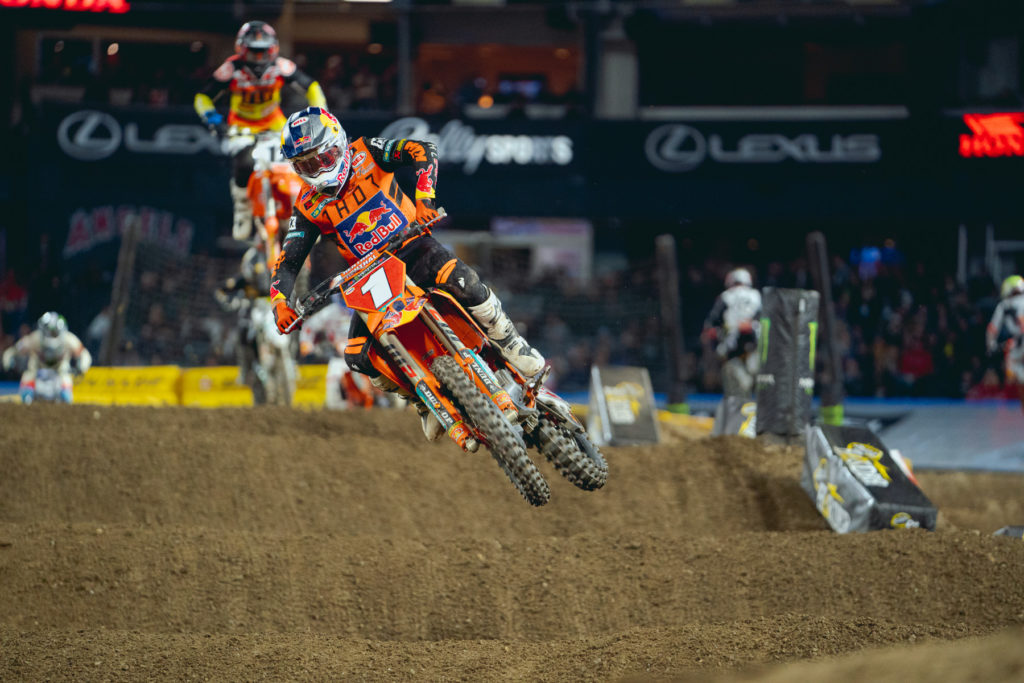 It was a quiet, yet consistent night for the reigning 450 Supercross Champion. Red Bull KTM’s Cooper Webb has never been known for his season opener rides and results, so we weren’t too surprised to see him finish up 8th place in the timed qualifying sessions.

After a fifth place finish in 450 Heat One, Cooper lined up for the first main event gate drop of the year with an average pair of results from the day. Webb came out of the gate and exited the first turn in fifth place, and was almost immediately battling with Barcia and McElrath. After losing a battle with Jason Anderson, Webb made the pass on Shane McElrath to even out his loses.

The remainder of Cooper Webb’s race was spent finding his flow and slowly ticking off consistent fast laps to near the top group. And just like that, Cooper found himself in fourth place, just behind Anderson and Barcia’s battle for third. After Jason’s misfortunes, Cooper took over third place and then quickly made the pass on Justin Barcia for second place.

Cooper Webb crossed the checkered flag in second place at Anaheim One, and though his number plate background will no longer be red at Oakland, this is the best start to a season that we’ve seen from Cooper in his 450cc career. 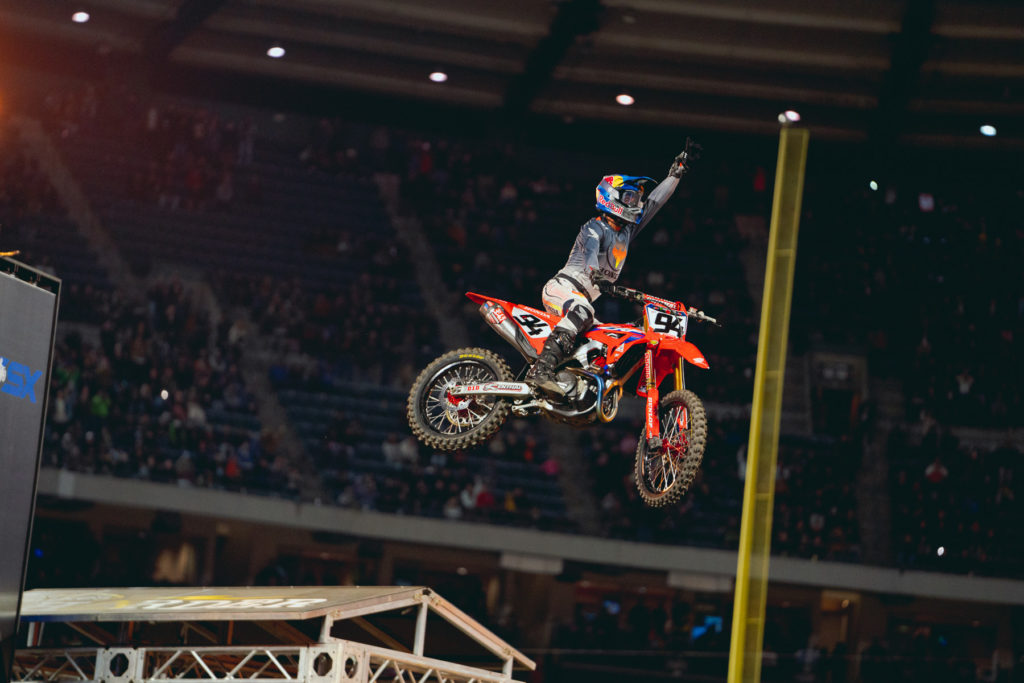 What a day for the number-94 HRC Honda rider. Ken Roczen started his day in Anaheim off well with a seventh place finish in timed-qualifying, where he sat just a few tenths off of the fastest lap time. However, Roczen’s day really came to fruition in 450 Heat Two, where he snagged an impressive holeshot and led a flawless start-to-finish race.

Ken Roczen rocketed out of the gate for a second time in the Main Event, however, this time he sat just behind his teammate Chase Sexton. Before crossing the holeshot line, Ken snuck inside of Chase to secure the lead. As they crossed the finish line for the first time and began their second lap, Roczen had already built himself nearly a second lead on his teammate and the rest of the field.

A few laps into the race, Chase Sexton began to close the gap between second and first place. Chase had found a faster jump-line through the second set of whoops that landed him just behind Ken. As Chase looked inside for his first attempt at a pass for the lead, Ken quickly shut the door and forced Chase to regroup. The teammates continued to battle and nearly clipped each other mid-air before Sexton made a minor mistake, allowing Ken to break away. Just after that small mistake, Chase Sexton had a larger mishap where he swapped entering a left-hander and went down.

Following that incident from Sexton, Ken Roczen found himself with a comfortable lead on the rest of the field and managed his way to the checkered flag, where he collected an impressive win at Anaheim One. 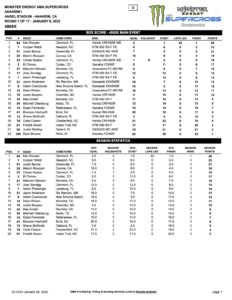 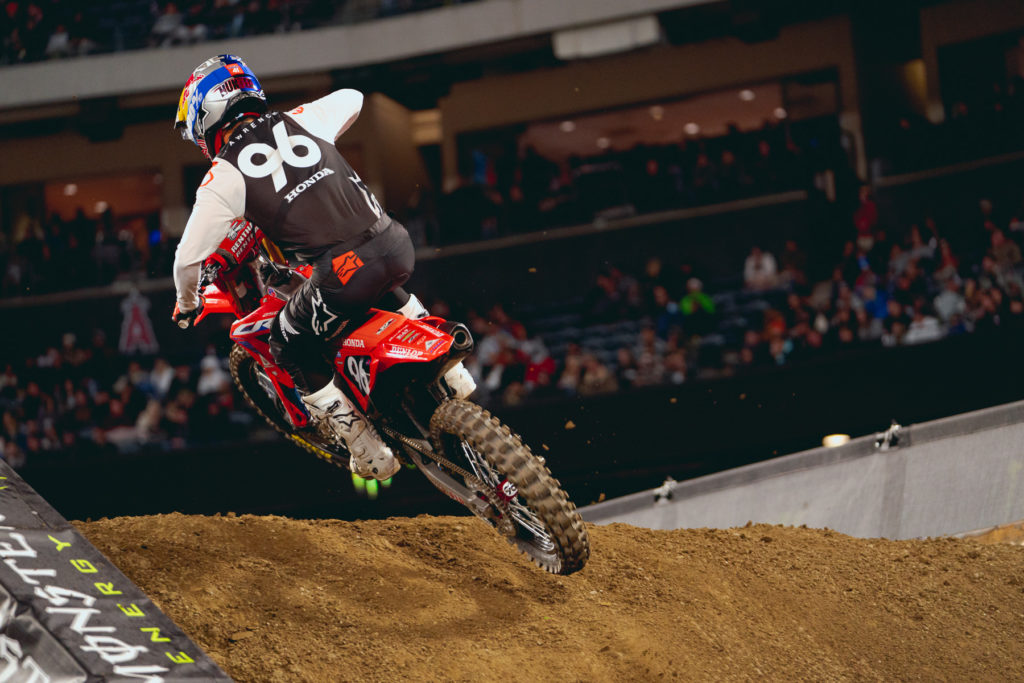 It was a solid series opener for Hunter Lawrence. The HRC Honda rider was third-fastest in timed qualifying and one of only three riders to break into the 57-second lap times. Though, the Heat Race gave Hunter some trouble, as he had a minor crash but managed to remount and transfer straight out of the heat.

As the 250 Main Event approached, Hunter Lawrence was considered one of only a few that were thought to be capable of winning the main event in Anaheim. Hunter’s start did him no favors, as he was shuffled back outside of the top-5 early. However, a few laps in and Hunter seemed to be finding his groove, as he clicked off passes and headed towards the front.

As the 250 Main Event neared its end, the HRC Honda rider snuck his way up to the back fender of Garrett Marchbanks and made the pass for third place with ease. 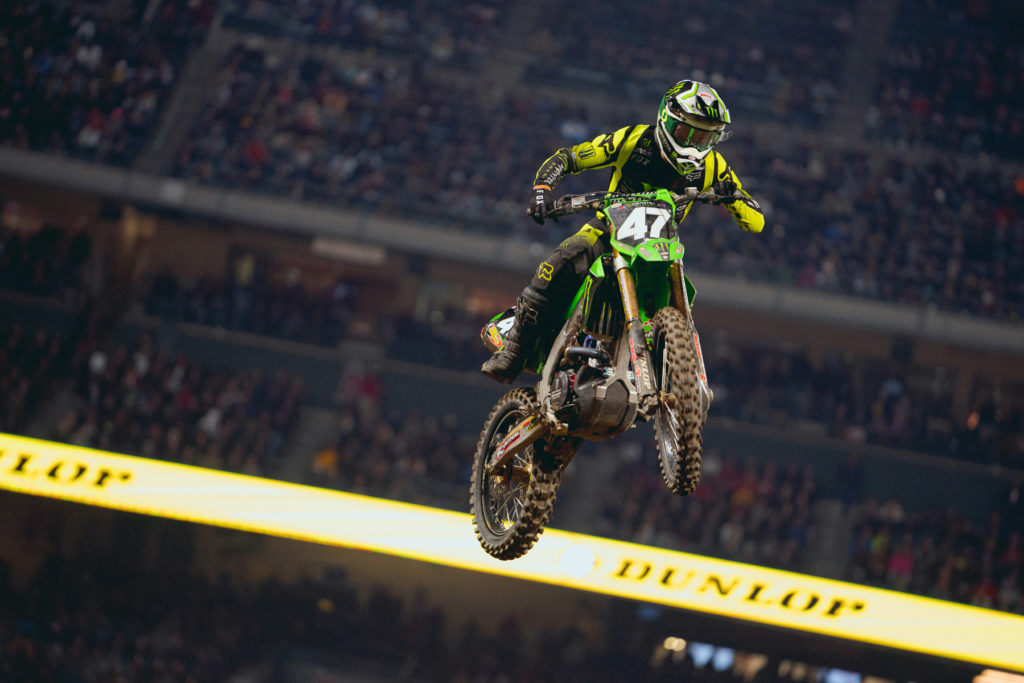 Anaheim One was good to Monster Energy/Pro Circuit/Kawasaki’s Seth Hammaker. The second-year pro had a solid start to the day in timed qualifying, where he finished just outside of the top-3 in fourth place. Seth then took that momentum to his Heat Race and fought his way to a second place finish.

Seth Hammaker came out of the gate swinging in the Main Event, as he left the first turn in second place, just ahead of Christian Craig. The Monster Energy/Pro Circuit/Kawasaki rider then battled with Craig over the second place position before having to resort to holding down third place for the time being. Seth latched onto Craig after being passed and was able to take advantage of the battle for the lead and follow it up with a quick pass for second place on the early race leader, Vince Friese.

Following his pass for second, it seemed to be a lonely race for Hammaker until Hunter Lawrence entered the picture. On the final lap, Hunter pulled alongside Seth and challenged for the second place position, but Seth held on. In the final corner, Hunter dove inside, clipping Hammaker’s arm with the front wheel of his HRC Honda. However, Seth held onto his Pro Circuit Kawasaki and rolled through the finish line just ahead of Hunter to secure his second place finish at Anaheim. 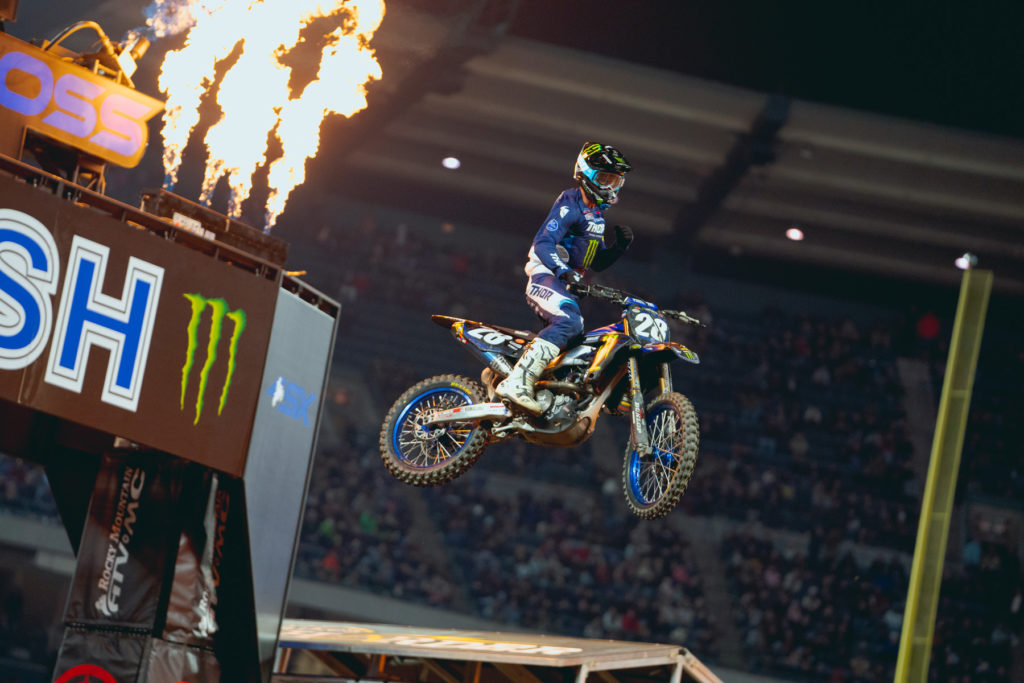 An action packed night full of chaos in the 250cc West Coast class rewarded Christian Craig with the series opener win after his consistently throughout the day. The Monster Energy/Star Racing/Yamaha rider was arguably the guy to beat coming into the day, and he justified those thoughts when he came out on top in both qualifying sessions. Christian’s success at Anaheim continued into the heat race, as he snagged the lead in both the initial gate drop and the restart following the red flag.

As for the main event, Christian Craig’s good fortune nearly came to an early end, as he began to let out the clutch a little early on the gate before recovering. However, his slight flinch inspired Jo Shimoda and a few other riders to drop the hammer a touch early, hanging them up in the gate. Though, Christian exited turn two in third place, just behind Seth Hammaker.

Craig made a quick pass on Hammaker to take over the second place position, however, that came just after a close call for the Monster Energy/Star Racing/Yamaha rider, as he brushed up against a tough block through a transition. Christian kept it on two wheels, remounted, and then immediately fell back into his race pace.

After securing second place, it didn’t take long for Christian to begin his hunt for the lead. After a few flawlessly executed sections, Craig was on the back fender of Vince Friese and challenging for the lead. Christian’s class-best whoop speed brought him alongside Friese a few times, but the pass for the lead ultimately came after Craig took a lower line in a left-handed bowl turn and managed to get a better drive through the following rhythm lane.

As the checkered flag waved, Christian Craig led 13-laps and took his first ever career victory at Anaheim One. The Monster Energy/Star Racing/Yamaha rider will head into Oakland, next weekend, with the red place and the 2022 250 West Coast points lead. 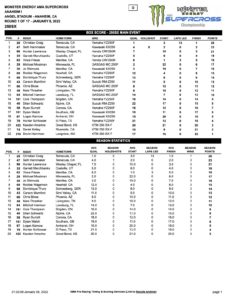