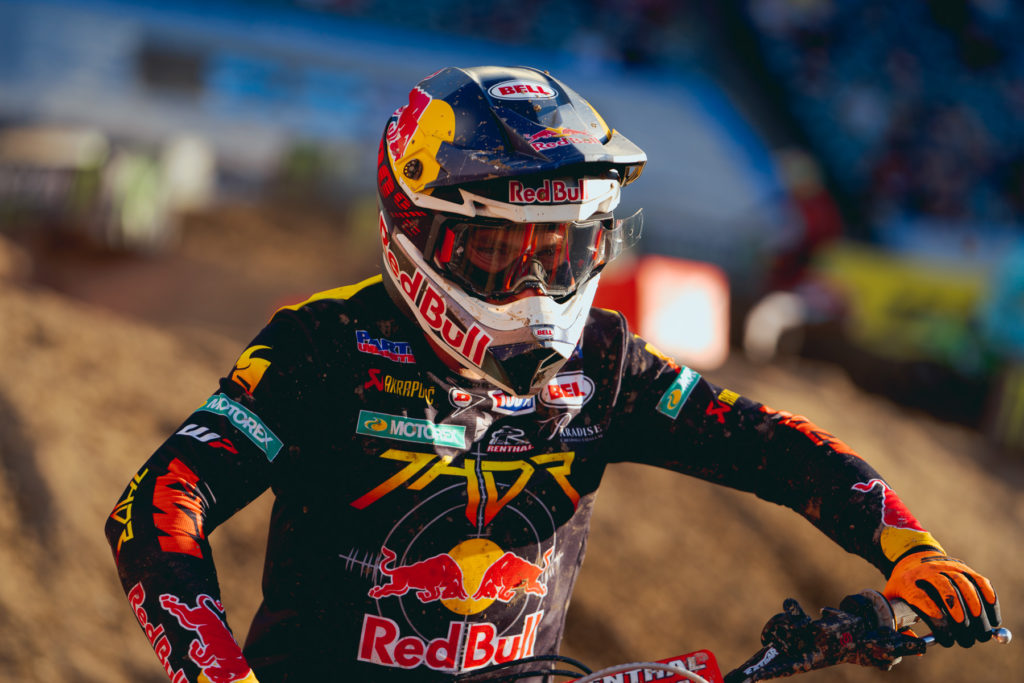 CHECK OUT OUR COMPLETE COVERAGE OF THE 2022 ANAHEIM THREE SUPERCROSS

Goodbye to the Golden State. The 2022 Monster Energy Supercross Championship completed its opening stretch of the season in California with the 2022 Anaheim Three Supercross, the third event at Angel Stadium and the sixth race of the 17-stop series. The last day under the A was much, much different than the first. Warm weather, with temperatures in the 80s and limitless sunshine, did its best to bake in the hard pack and zap riders of their energy. A pecking order, now somewhat established in both classes, shook out on the results sheets. And everyone left the parking lot with a belief that the biggest fights were still to come.

The whoops terrified riders at Anaheim Three. This was the longest set so far in 2022, a pack of 14 that ran from the outfield to home plate, and we understand why so many guys had issues in them. Built big and with California hard pack, the rollers were compared to curbs by those who had to skim them for a paycheck; only a few opted to jump through the section, but that wasn’t until very late in the night.

Eight lines in one turn. Impressive.

Hunter Lawrence’s crash in the whoops wasn’t the worst of the 250 Main Event, that honor goes to Jalek Swoll and his helmet-smashing hit, but it might be the most impactful of the 250 West Region. The Team Honda HRC rider was down for a decent amount of time, which prompted the Alpinestars Mobile Medical staff to tend and the load him onto the Mule with what appeared to be a sore arm, but post-race press release by Big Red said that Lawrence was not seriously hurt in the crash.

Now third overall in the standings and down 29 points to Craig, Lawrence will have to rest up during the break and make a hard push in the remaining race.

Michael Mosiman was one of the few who lucked out in the wild 250 Main Event. The Troy Lee Designs/Red Bull/GASGAS Factory Racing rider went down in the sand very early in the race, an incident that dropped him back to 13th on the opening lap, then charged back to third place by lap seven and second by lap 11. That’s a run. Unfortunately, Mosiman went down again very late in the race and gave the runner-up finish away. Still, it was a statement by Mosiman, as the podium finish paired with rival Lawrence’s crash pushed him to second overall in the point standings. He’s up one on HLaw, but down 28 to CC.

Another dominant day by Christian Craig. Anaheim Three seemed made for the Monster Energy/Star Racing/Yamaha rider, with its hard-packed dirt-big rhythm lanes-long whoop pad, and he was considerably quicker than the competition. Craig’s laps in Timed Qualifying was the first indicator, as he was over a full second faster on the stopwatch than every other 250 rider and third overall of the combined field, and he carried that into a Heat Race win and 25-second margin of victory in the 250 Main Event. Craig’s focus for the next few weeks will be on the 450, but not for SX; he’s committed to the big bike for the summer’s Pro Motocross tour.

Seven days of controversy were put to rest when Vince Friese earned a second-place finish in the 250 Main Event. The Smartop/Bullfrog Spas/MotoConcepts/Honda rider did what he always does in the night’s last race, as he claimed the holeshot again and settled into the top-three, a place in the running order that he held for all 16 laps. Friese powered through while others around him crashed, including the previously mentioned tumble by Mosiman in the closing moments, a veteran sort of consistency that’s lacking in the region. Friese will spend the next few weeks in the 450 Class in a split role akin to Mitchell Oldenburg.

The start was one of three key moments in the 450 Main Event, as an excellent jump out of the gate and tight line through the first turn gave Monster Energy Kawasaki’s Jason Anderson control of the race while Monster Energy/Star Racing/Yamaha’s Eli Tomac-Team Honda HRC’s Chase Sexton-Troy Lee Designs/Red Bull/GASGAS Factory Racing’s Justin Barcia-Red Bull KTM’s Cooper Webb and Marvin Musquin found their rank at the head of the running order. Further back in the shot, you can see how Ken Roczen’s race got interrupted before it even began, as the Team Honda HRC rider was pushed out and into the Tuff Blocks by Malcolm Stewart.

We’re really enjoying these Anderson-Tomac battles. Yeah, there’s plenty that could be said about the respective team switches or how they’ve relit the fire late in their careers, but really, the best thing to do is watch them in action. Anderson’s ability to find traction where others don’t is unrivaled in the 450 Class, and it’s a skill that’s used every time he cuts down in a corner on the KX450 or blasts across the hard pack. Tomac’s brute force technique seems amplified by the blue bike, especially around the outside edges of turns and through heavy sections like sand. The two will go at it a few times more this year, we’re certain of it, but it’s still too soon to say who will come out with the number one plate.

These shots are from the third key moment in the 450 Main Event. Anderson and Tomac were feet apart as they entered the long whoop section, a part of the track that had given both their share of issues through the day, until a small mistake by ET3 caused him to lose forward drive and dropped him into the rollers…

Tomac hammered the gas on the YZ450F to make up for it, but by then it was too late. Anderson’s slightly better run over the rockers offered him a chance to add to the advantage, and he was never pressured again until the checkered flag. Oh, what was key moment number two? That’d be when Tomac went for a move in the short, punchy rhythm lane after the flat straightaway, one that got him the lead for a split-second, but that Anderson responded to immediately.

Hard to believe we’re six races into the season and that Justin Barcia hasn’t scored a W yet. The Troy Lee Designs/Red Bull/GASGAS Factory Racing crew’s intent for 2022 is to keep Barcia in the mix all the way to the end of the season, a goal that he’s working towards through consistent top-10 results, like a third-place finish at Anaheim Three. With 110 points to his credit and a fifth-place rank in the season standings, we’re keeping an eye on BamBam as the series heads East.

Jason Anderson’s second win of the season should answer any questions of, “Is he a serious contender?” If not for a few errors here or there, like San Diego’s radiator cap catastrophe or that crash during the second moto of the Glendale Triple Crown, it’s safe to say that the points spread between ET3 and JA21 would be much, much closer. But none of that seems to be on Anderson’s mind right now. Instead, he’s taking the races as they come, enjoying every situation for what they are, and ending every Saturday with a belief that he did his best.