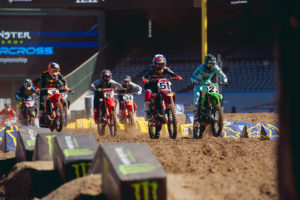 CHECK OUT OUR COMPLETE COVERAGE OF THE 2022 ANAHEIM THREE SUPERCROSS

We are back in Anaheim, CA for the final time in 2022, as round six of the Monster Energy Supercross Series is officially underway. Riders spent Saturday afternoon learning the track that fills the floor of Angels Stadium, and to no surprise, the lap times are incredibly close. The front-runners in the 250 West Coast and 450 Class were split by just fractions of a second on the qualifying sheets, building the anticipation for tonight’s gate drops even more! 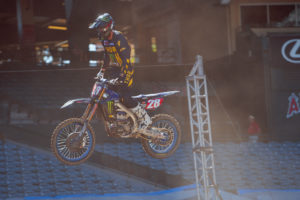 Monster Energy/Star Racing/Yamaha’s Christian Craig is back on top in qualifying. The 250 West Coast points-leader set a blistering fast 56.813 late in the second session of qualifying, over a second faster than second place.

Jo Shimoda piloted his Monster Energy/Pro Circuit/Kawasaki to a second place result in qualifying, as he logged a 57.948 in the final timed-session.

Troy Lee Designs/RedBull/GasGas Factory Racing’s Michael Mosiman sat just behind, as his 58.147 was just a few hundredths off of the next best time.

Richard Taylor went down in the whoops and appeared to have hurt his arm, ending his day in Anaheim.

Dylan Walsh had a crash in free-practice and ultimately did not return to the track in either qualifying session that followed.

The number-35 machine of Garrett Marchbanks failed the sound test at the end of the first qualifying session. 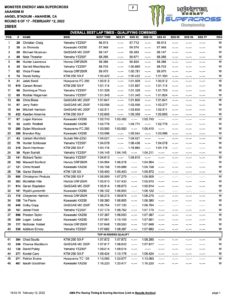 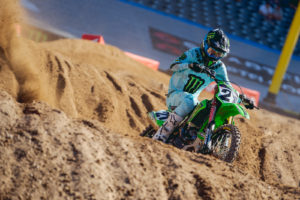 Late in the final session of qualifying, Monster Energy Kawasaki’s Jason Anderson logged a 56.700 and moved himself into pole position in Anaheim Three.

Monster Energy/Star Racing/Yamaha’s Eli Tomac was on top of the leaderboards for a majority of the second qualifying session, until Anderson laid down that fast lap. The points-leader’s lap was just a few tenths slower but still good enough for second place on the timed-sheets.

HRC Honda’s Chase Sexton sat in third place after the final session of qualifying concluded, thanks to his 57.213.

Josh Hill went down hard towards the end of free-practice and was carted off. Heal up big Hill.

Jason Anderson went down in the first-timed session while jumping into the sand, causing a pile-up involving Webb, Sexton, and himself. Webb quickly grabbed Sexton’s bike and took it off of Anderson, eliminating any chance of Jason being burned by the HRC Honda exhaust. All three remounted and seemed back on-pace immediately. 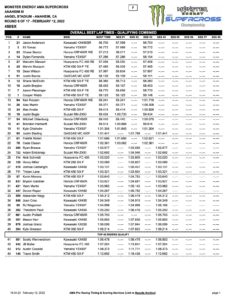