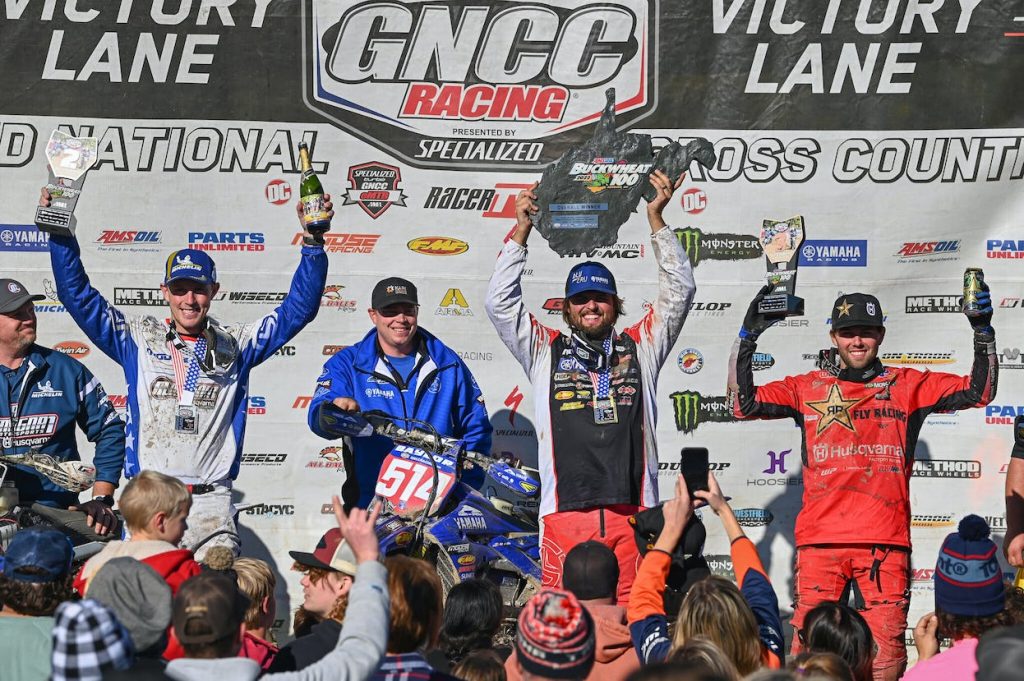 The Grand National Cross Country Series is in its final weeks, as the 2022 Buckwheat 100 GNCC, served as the eleventh and penultimate race of the year for the off-road series. The last part of the season is exciting as always, with riders hopeful that they can make things interesting during their hours on the bike.

Round twelve, the AMSOIL Buckwheat 100, of the 2022 Grand National Cross Country Series presented by Specialized, an AMA National Championship, concluded yesterday on Sunday, October 9 in Newburg, West Virginia. The sun was shining throughout the day, but the colder temperatures stuck around once again.

As the XC1 Open Pro fired their machines off the line it was Rockstar Energy Husqvarna Factory Racing’s Thad Duvall earning the $250 All Balls Racing XC1 Holeshot Award. As the pack headed into the woods on lap one it would be Magna1 Motorsports/Husqvarna’s Jordan Ashburn, who clinched the National Championship at the previous round, coming around in the first place position.

However, after a mistake Ashburn would find himself back in fourth as AmPro Yamaha’s Steward Baylor was busy making his way through the pack from a sixth place start to the race. Baylor had made his way to second by lap four and was working on passing Coastal GASGAS Factory Racing’s Ricky Russell who had moved into the lead. After Russell lost his momentum up the hill climb, Baylor would be able to make the pass stick for the lead. Baylor would hold the lead until the checkered flag flew, earning his second win of the season as he missed rounds 2-8 due to injury. 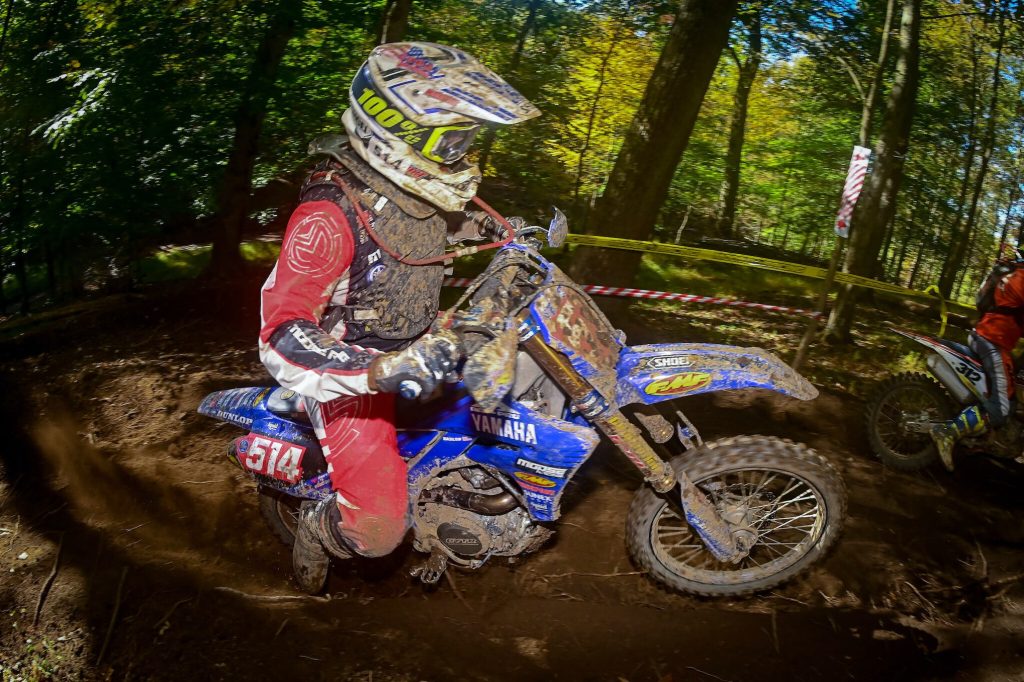 Ashburn would manage to work his way back up to second to finish out the race, while Rockstar Energy Husqvarna Factory Racing’s Craig DeLong also managed to battle his way back into a podium finish as he moved into third with two laps remaining in the race. His teammate, Rockstar Energy Husqvarna Factory Racing’s Thad Duvall would come through fourth on the day after holding the lead on the third lap of the race. Ashburn, DeLong and Duvall would all come through the finish just seconds separating them.

FMF/KTM Factory Racing’s Joshua Toth would finish the day out fifth in the XC1 class as he had to make a pit stop for a new shifter after snapping his off at the top of the hill climb. After his hill climb incident, Coastal GASGAS Factory Racing’s Ricky Russell would also have his shifter sheared off by a stump, costing him more time in the race. Russell would be unable to catch the front again, and finish sixth in the XC1 class. Coming from Finland and riding under the Factory Husqvarna tent was the number 147 of Miro Sihvonen. He would finish seventh in the XC1 Open Pro class.

In his first XC2 250 Pro race it was Tely Energy KTM’s Nathaniel Tasha grabbing the $250 STACYC XC2 Holeshot Award. However, it didn’t take long for Babbitt’s Online/Monster Energy/Kawasaki Team Green’s Lyndon Snodgrass to make the pass for the lead. Snodgrass would try to put his head down and push, but Coastal GASGAS Factory Racing’s Jonathan Girroir would apply the pressure and make the pass for the lead on the second lap.

Girroir and Snodgrass would swap the lead position multiple times throughout the race. After a mistake late in the race, Snodgrass would make his way back around Girroir to take the win. As Snodgrass earned the win at round 12, it would be enough for him to earn the 2022 XC2 250 Pro National Championship. 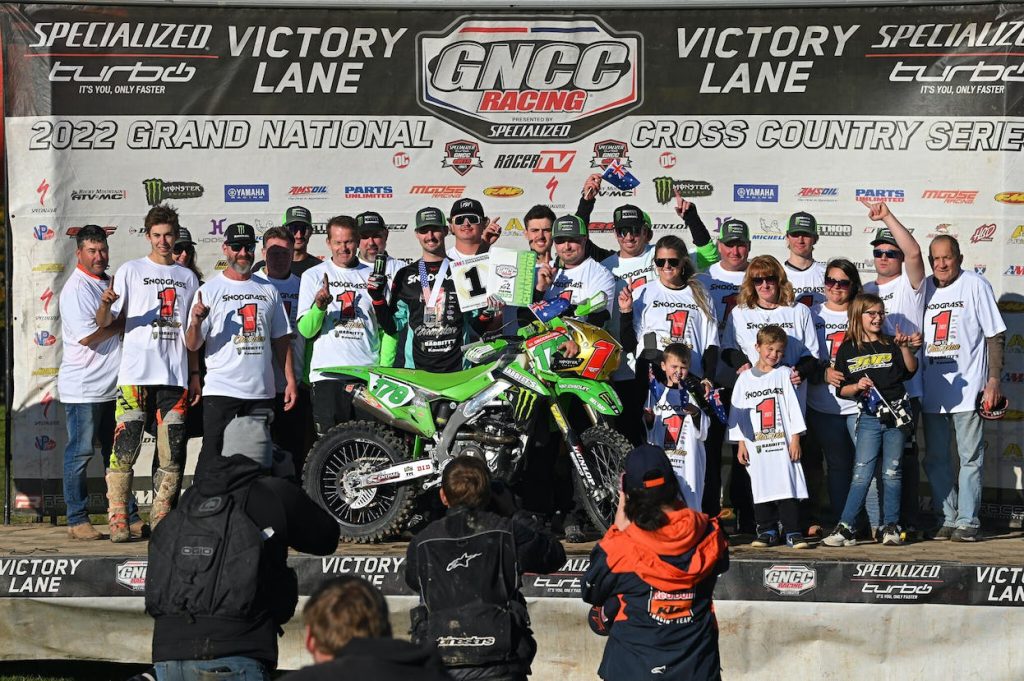 Tely Energy KTM’s Liam Draper would remain third in the class for the duration of the race, earning his second-straight podium finish and his fourth podium appearance of the season. Coastal GASGAS Factory Racing’s Ryder Lafferty would battle back to finish fourth on the day, while Phoenix Honda’s Cody Barnes finished fifth in the class.