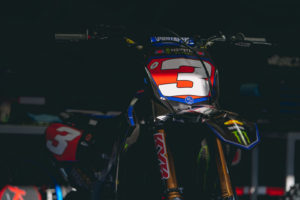 The Monster Energy Supercross series returns to Empower Field at Mile High for the first time since 2019, as round sixteen is well-underway in Denver, CO. Riders spent Saturday morning learning the track that fills the home of the Broncos, and to no surprise, the lap times are incredibly close. The front-runners in the 250 West Coast and the 450 Class were split by just fractions of a second on the qualifying sheets, building the anticipation for tonight’s gate drops even more! 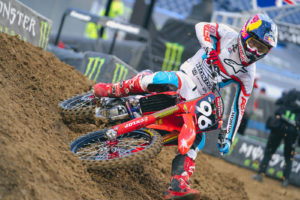 Hunter Lawrence was the fastest rider in the 250SX timed qualifying sessions this morning, as the Honda HRC rider was the first rider to dip into the 45-second lap times. After continuing to better his lap time, lap after lap, Hunter logged a 45.252 late in the final session of qualifying and claimed the top spot on the leaderboards.

Christian Craig wasn’t far off, as the Monster Energy/Star Racing/Yamaha rider battled Hunter Lawrence on the clock. The two swapped positions as the fastest qualifier multiple times, but ultimately, Christian’s 45.405 landed him in second place in qualifying.

Garrett Marchbanks was the next name on the time-sheets. The ClubMX/FXR/IMMACOMEBACK/Yamaha rider was on it all morning and his 45.872 jumped him just in front of Jo Shimoda on the leaderboards. 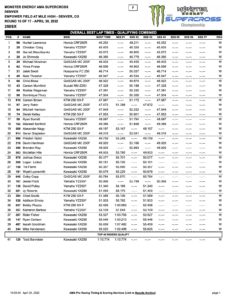 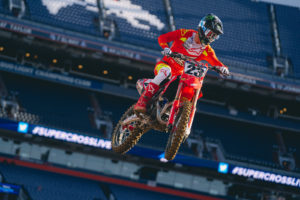 Chase Sexton was the man to beat in timed-qualifying, as the Honda HRC rider laid down the fastest times in both sessions of riding. Sexton’s 44.624, logged late in the final session, was the fastest lap time of the morning.

Eli Tomac was just behind on the time sheets, as the Monster Energy/Star Racing/Yamaha rider logged a 44.624 late in the final session of qualifying. The 450SX points-leader looks to claim the 2022 450SX Monster Energy Supercross championship in front of his home-town crowd this afternoon.

Jason Anderson was going for it on the final lap of the last qualifying session, but unfortunately lost the front-end with two corners to go. Forcing him to settle with third place, as his 44.711 was just a few tenths off of the fastest lap time logged. 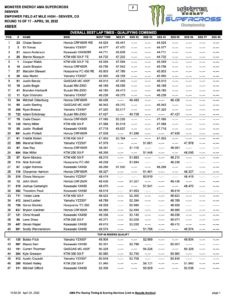 2022 Denver Supercross | How Was Your Weekend