In the Nations standings, it was Team USA who were victorious, finishing on top ahead of Finland and Team Netherlands. 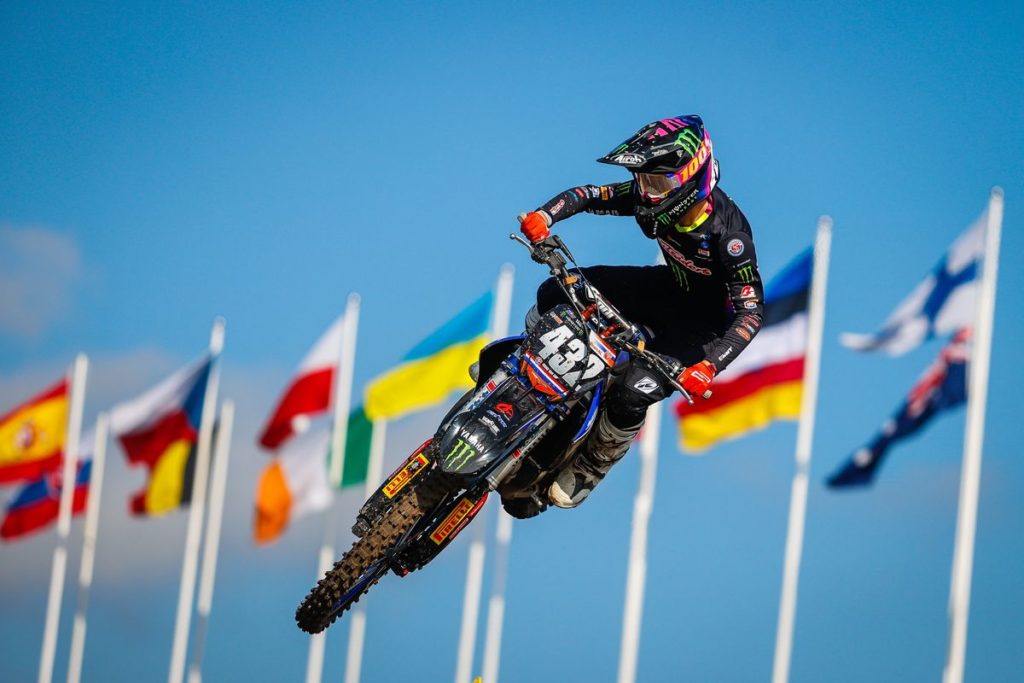 In 125cc race one, Ivano Van Erp led the way after getting the Fox Holeshot ahead of Casey Cochran and Cas Valk. There were a few riders that went down in the first corner, this also included Edgar Canet. By lap three, Valk and Janis Martins Reisulis overtook Cochran. Valk continued his charge and caught onto the rear wheel of Van Erp by the end of the race, though Van Erp was able to keep the EMX125 Presented by FMF Racing Champion at bay, to win the race while Valk settled for second ahead of J. Reisulis who was third.

125cc Junior World Champion, Ivano Van Erp: “I feel really good in this moment! I had a big crash on Wednesday, so I could not train on my bike. This weekend was my first time on it after the crash and I was struggling a little bit with the feeling on the bike. In the first race, I took a holeshot and controlled the race by myself. In the second race, I started sixth or seventh and then made a small mistake in the first corner. Then I took second and was faster than Janis [Reisulis] at the end, but I just took it easy, didn’t push, stayed second and became World Champion”. 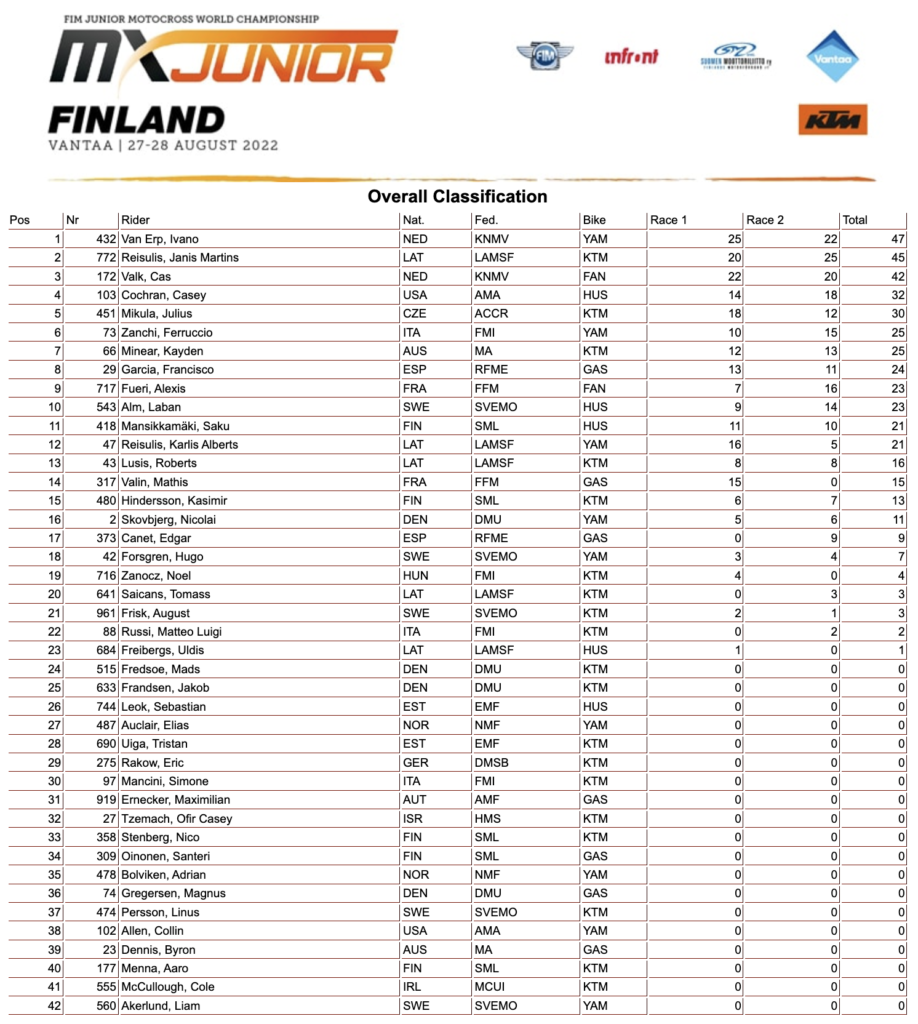 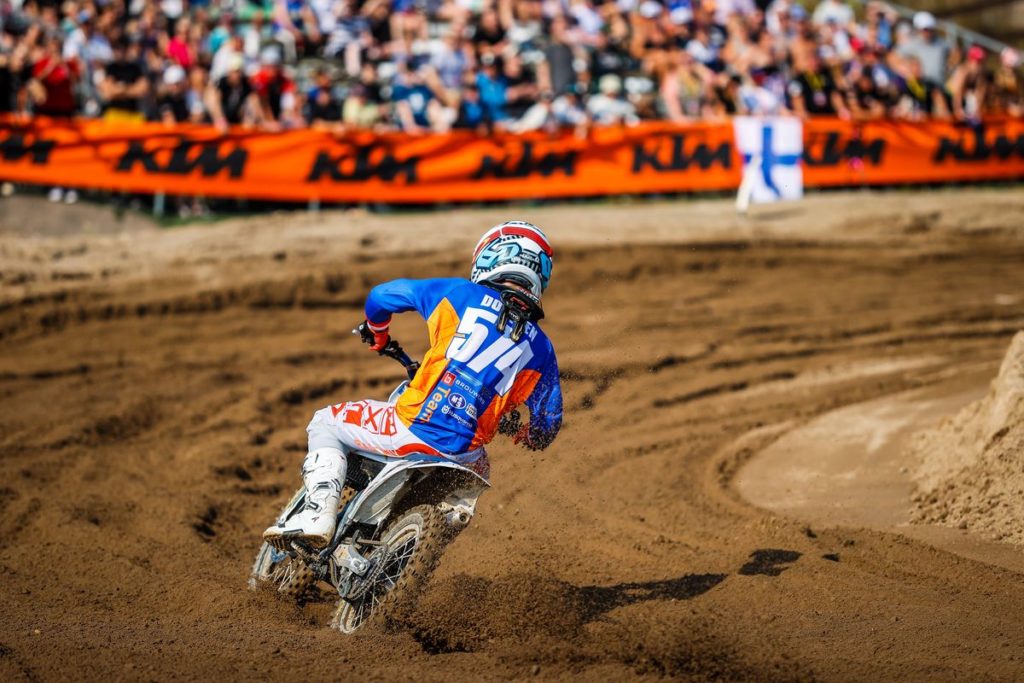 In the first 85cc race, the Fox Holeshot went to Mano Faure, while Gyan Doensen had a decent start as he worked his way up the order and into second. Jarné Bervoets was the leader for five laps until he made a mistake which allowed Doensen into the lead. Bervoets then crashed which also allowed Vitezslav Marek into third. Marek had to fight back from seventh after a mid-field start.

In the second race, the Fox Holeshot was won by Filippo Mantovani, but his time in the lead was cut short as Doensen was quick to take over first place in the second corner. Marek was right there too, following the Dutchman as the two battled closely. Marek pushed hard, searching for any opportunity to pass, and after 11 minutes of the race, he was able to finally get around Doensen and take over the lead. Marek looked in control until the penultimate lap where he crashed, which handed the race win and the title to Doensen. Bervoets finished third.

A 1-1 result meant that Gyan Doensen was crowned the 85cc FIM Junior Motocross World Champion of 2022 ahead of Vitezslav Marek who placed second and Jarné Bervoets who placed third overall and secured the bronze medal.

85cc Junior World Champion, Gyan Doensen: “Yes, you know, I’m speechless. I worked super hard for this and this year it needed to happen, and it happened, so I’m super happy! I got second in the European Championship and now first in the World Championship, so yeah, I am really happy. I want to thank my team for all the effort and my family and of course friends, everyone”. 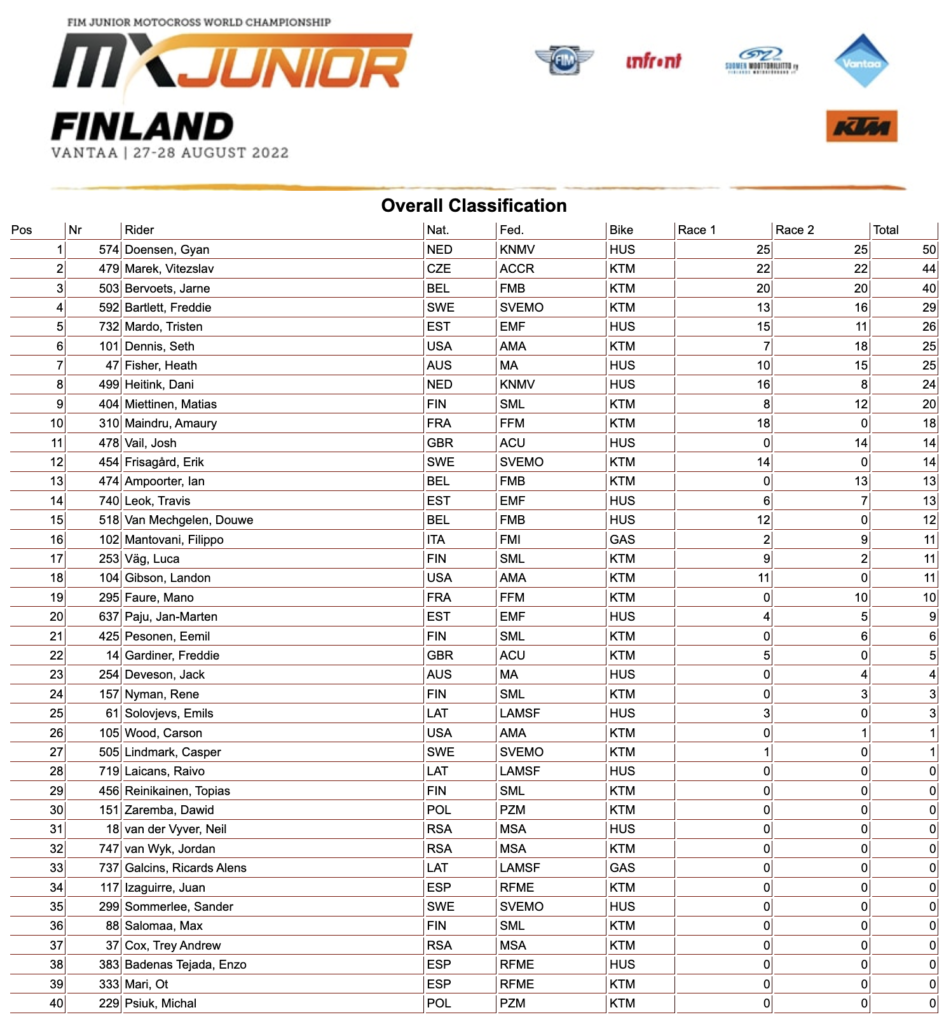 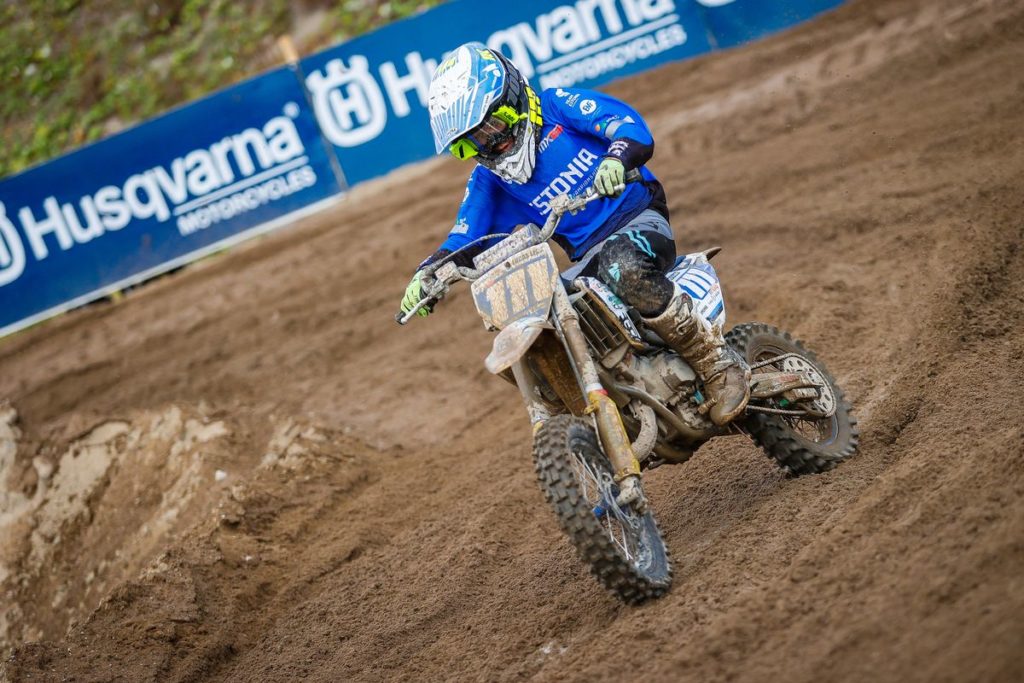 In the first 65cc race, it was Enri Lusts who took the Fox Holeshot though by the second corner was passed by Lucas Leok, who led the entire seven laps of the race. Lusts dropped back to 12th, while crossing the line second was Viktor Leppälä and Moritz Ernecker who finished third.

Race two saw Lusts take the Fox Holeshot once again, though was quickly passed by Andrea Uccellini. Uccellini made a mistake which allowed Eeka Laaksonen to move into first place, but at this point Aston Allas and Leok were also closing in. By lap three Allas and Leok were able to pass the leader. Two corners later Allas crashed and Leok was the new race leader. The young Estonian was able to open up a nice gap to the rest of the field. Meanwhile Ricardo Bauer was fourth and was on a charge. The Austrian managed to catch and pass Jorge Salvador and Pau Ruiz Caudet to finish second as Leok won the race again.

65cc Junior World Cup Winner, Lucas Leok: “I’m very happy and I really wanted to win here. we worked hard for this with the whole team. This was my first start in the World Cup so it means a lot for me. The second race, I struggled a bit and the track was not easy anymore”. 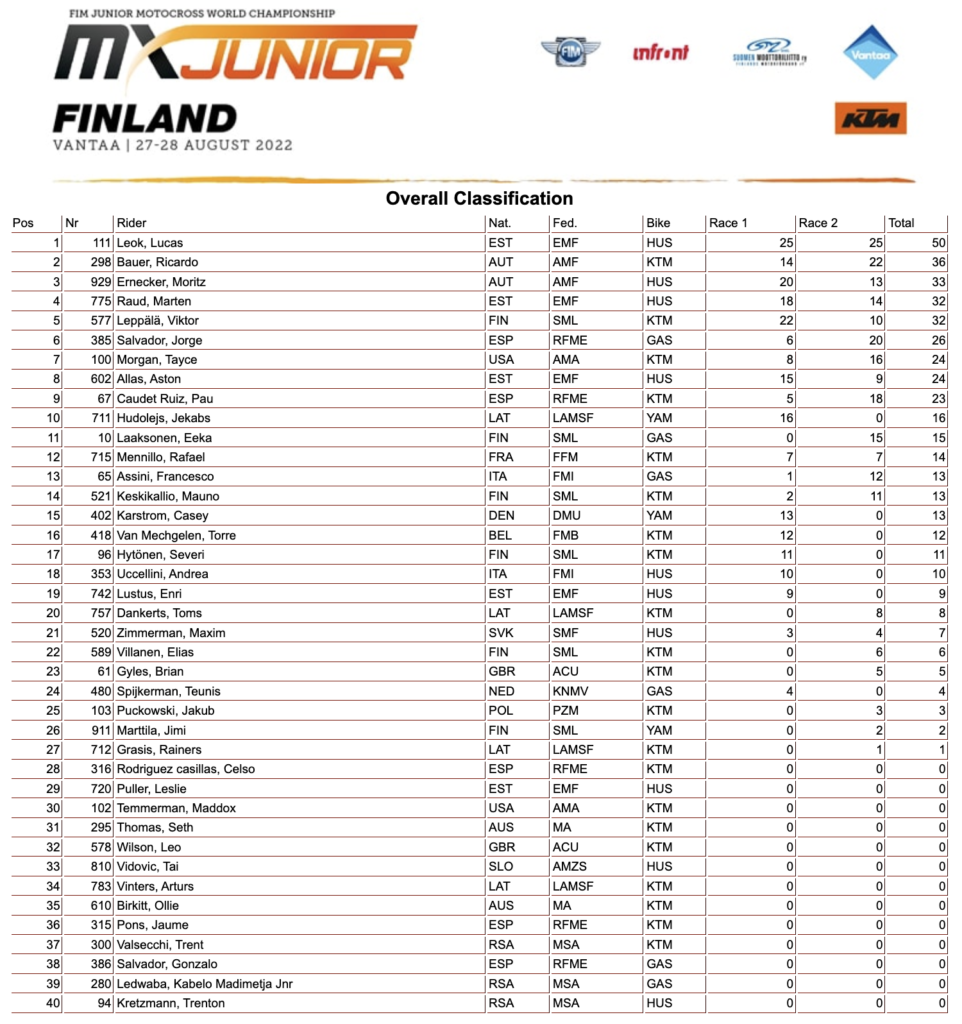 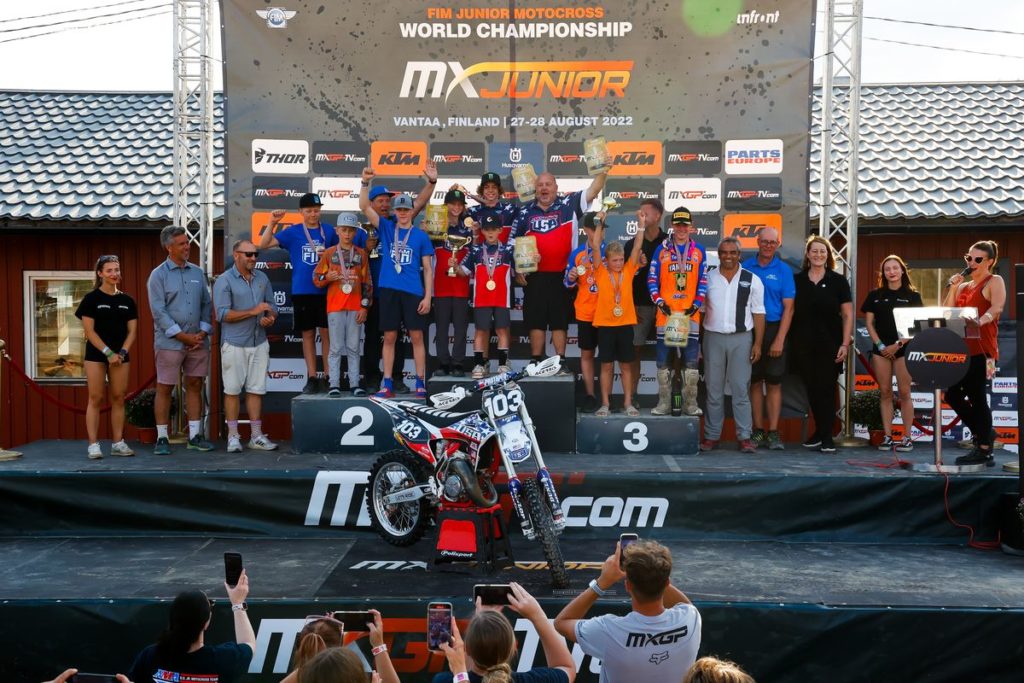 In the nations’ classifications, Team USA were the overall winners with 17 points, while second with 25 points were Finland, followed by Team Netherlands in third with 26 points.

Meanwhile, Team South Africa were declared the winners of the Ride Green Cup for showing their dedication to caring for their environment. 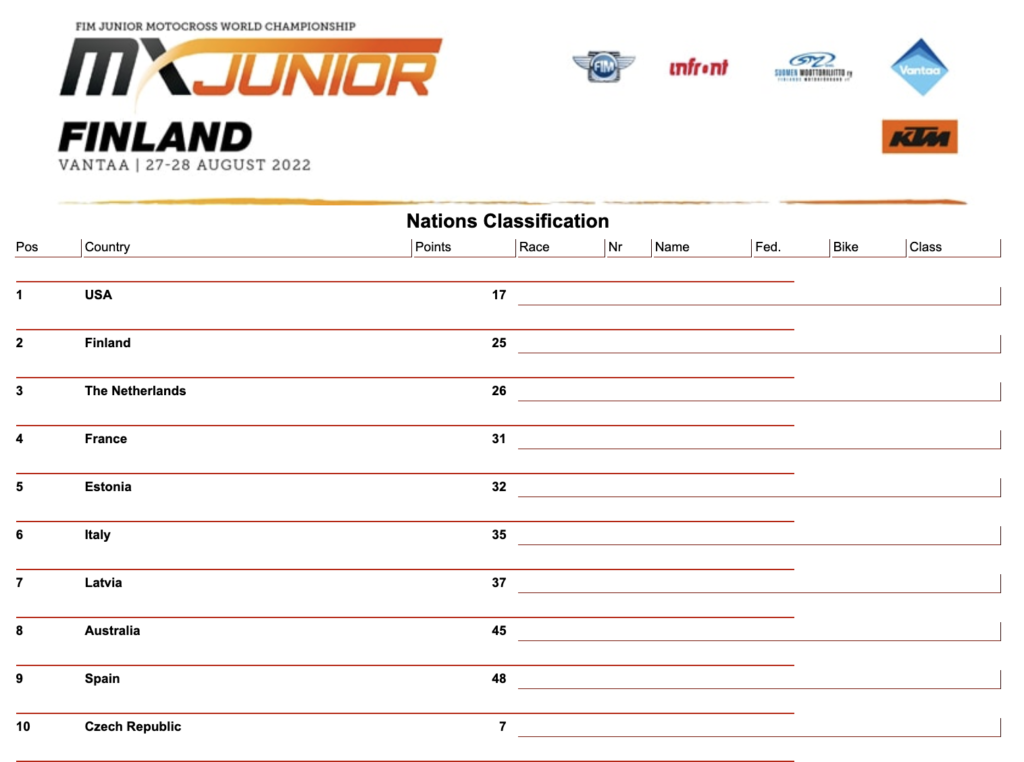