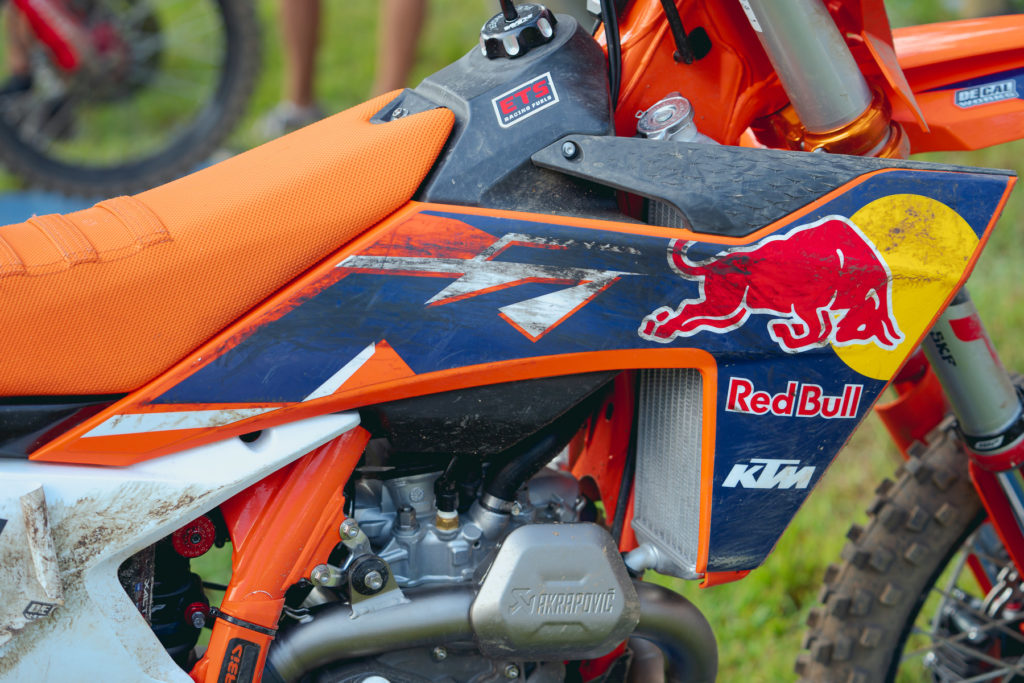 Days like the Ironman Motocross are what race fans dream about. The weather? Excellent, with temps in the mid 80s, an abundance of sunshine, and no worry of rain. The track? To take a term from Max Vohland, “the super-sized Loretta Lynn’s” was ripped and watered to near perfection. The competition? Some of the best it has ever been, with one all-time great in his farewell summer facing off against one of the highly touted members of the next generation in the 450 Class and a handful of young upstarts going for the win in the 250 Class.

Friday at Ironman served as the second Scouting Moto Combine of the summer. Two dozen young riders went through the motions of pro race day, from timed laps in practice to hurried recovery breaks between long motos, with some coaching from former pros Reed-Byrne-Tickle-Glover. Chance Hymas put a lackluster showing at Loretta’s behind him during the event, as the Team Honda HRC rider was the fastest in practice, led 28 of the 29 laps, and ended up on the top of the box with 1-1 scores. Hymas will skip the third combine, set to happen at Fox Raceway on Friday, and will instead race in the 250 Class on Saturday.

Daxton Bennick is on one right now. The Orange Brigade rider, fresh off a 250 B Class title at the Ranch, put in 4-2 finishes for third overall, but a deeper look at the results sheets shows he battled back from a so-so start in Moto One and that his laps behind Hymas in Moto Two were very fast (his best lap was quicker than the winner’s and he maintained a 2:06 average). Expect the North Carolina rider to be in the A Class come 2023.

Evan Ferry was another rider that used the Combine to forget about a tough week in Tennessee, and consistent laps put the NSA Yamaha Factory Amateur rider second overall. Ferry stole a lap from Hymas in Moto One before finishing second, pushed from seventh to third in Moto Two, and most importantly, avoided disaster down the long back straightaway. Search for Evan’s name on our site to hear a past episode of the Midweek Podcast with the Florida man.

Levi Kitchen tried his best to get back to full strength and speed, but his left wrist isn’t quite ready. The Monster Energy/Star Racing/Yamaha was a surprising seventh-fastest in Timed Qualifying, something he backed up with an eighth-place finish in Moto One. Unfortunately, the severity of the problem caught up with him in the middle of the afternoon and prompted a withdrawal from the second moto and most likely the Fox Raceway finale. “I did everything I could to race this weekend, but it just wasn’t enough,” said Kitchen in the Yamaha PR. “I’m still in a lot of pain, and I was dealing with it, but it really set in by Moto Two.” He still finished twelfth overall.

Gavin Towers quietly made his professional debut at Ironman. The NSA Yamaha Factory Amateur went into the weekend knowing that there was a small issue with his knee and hoped it wouldn’t be a problem, but a jarring move in Moto One caused it to do the dreaded “pop” and he did not finish out the day. Here’s hoping to a quick recovery for the young rider.

New threads for BBMX, as FXR will outfit Benny Bloss and Fredrik Noren with pants, jerseys, and helmets for the final few races of the Pro Motocross tour. We’ve been told that BBMX plans to be in the pit area again in 2023, but like many things, the details are still being sorted out.

Top executives from Feld Entertainment, including company President Kenneth Feld (holding the telephone), were at Ironman to chat with MX Sports and take in the penultimate round of Pro Motocross. To say this was an important visit would be an understatement, as the group met with key people from every team to discuss the newly formed SuperMotocross World Championship and what it brings to the future of the sport. Few things we’ve heard about 2023: expect a one/two week break between SX-MX, Ironman as the finale of the summer series, Pro Motocross going later in the year, and maybe two weekends off in Supercross.

The Ryder D-Haiden D battle in Moto One was brief, but man, it had our attention. We caught the two teenagers as they dropped back down into the track from the Godzilla section (shot included in the gallery below) and followed them up and over the infield tabletop.

Jett Lawrence made sure Nate Thrasher couldn’t fire back on this move in Moto One. The Team Honda HRC rider followed the Monster Energy/Star Racing/Yamaha rider down the rough straightaway, hooked a tight line through the right-hand turn, and split the leader and a lapper as he launched off the face of the tunnel jump.

One thing we’ve noticed about Guillem Farres is that he stands up a lot. The Spaniard continued his time with Monster Energy/Star Racing/Yamaha at Ironman, this time going 9-16 for eleventh overall. Farres won’t be at Fox Raceway, as he has prior commitments to his European team, but we’re hearing that he’s done enough to earn a deal with Star Racing for 2023 (MX only) and 2024 (SX and MX). Not shown here are the Stegpegz that Farres asked to be added to his bike after trying the pieces used by Kitchen and Thrasher.

We say it every year, but man, this summer flew by. It seems like just the other day we were pulling to Fox Raceway for the preseason test day, full of questions and expectations, and now we’re days away from returning to the SoCal circuit to see two titles get awarded. Don’t get too down, though, because an offseason of prep and hype for 2023 is just around the corner.

Riders always comment how important a start is, especially in the 450 Class, and this shot shows why. The seven riders shown here (Roczen-Dungey-Sexton-Tomac-Anderson-Craig-Stewart) are doing everything they can to drive forward and get an advantage on the guy next to them through body positioning, throttle control, and on-bike assists like holeshot devices or ignition profiles. What stands out to you?

Ken Roczen was eager in the early laps at Ironman. The Team Honda HRC rider got his usual great starts (season average is 2.8) and was to the front within a few moments of the gate dropping in both motos, making him the only person aside from Sexton or Tomac to lead a lap (season total is now 74). Have the recent results (he’s set to finish fourth in the championship) and efforts to help Sexton done enough to up the requested salary or full-time terms in the contract negotiations with Honda?

Did you catch this week's episode of the SML Show with Justin Rodbell? The Maryland racer has joined the Twisted Tea/HEP Motorsports/Suzuki squad for the final two rounds of the year in the place of Brandon Hartranft (Big Sexy needed surgery to correct an ankle injury) and posted 20-17 finishes for nineteenth overall. Props to Rodbell for jumping on a third make of bike this year (Kawasaki-Husqvarna-Suzuki) and instantly feeling up for a gate drop.

Add 450 Moto One to the list of "Races to Re-Watch This Offseason." Seeing Eli Tomac and Chase Sexton go all-out for seventeen laps was incredible, because there were times we saw them take notice of each other over jumps and then immediately respond by going hard or faster through the next section. Sure, it led to a few mistakes, like Eli getting out of sorts here, but both were able to reel things back in and push forward. Scroll down for more shots of ET and CS in action.

No celebration by Eli over the finish line in 450 Moto One for his 1.533-second margin of victory.

Brian Deegan with a few last moment motions/words of advice to Haiden before the gate dropped.

Another learning lesson for Max Vohland. The Red Bull KTM rider was part of the front pack in 250 Moto One, as he ran among the top-three through the first six laps but was pushed back to seventh by an experienced list of small-bore competitors. Max's 7-7 results put him seventh overall and extends his run of top-10 Moto results to ten.

Not a full-blown knobby, but not quite a scoop.

We should of known that Aaron Plessinger would make a run at the Ironman podium. The Red Bull KTM rider has spent plenty of time at the Indiana property over the years, thanks to his GNCC roots, and quickly took to the dark Midwest dirt. AP earned his third place result in Moto One the hard way, as he picked and plotted past a handful of past champions, then was boosted one spot in Moto Two by Jason Anderson's penalty. First podium for production AER forks?

At least we got another Wilson-Barcia battle from Dean's Outdoor farewell tour. The 15 and 51 have had plenty run-ins over the years, especially outdoors. Sounds like Dean's off-track excursion/collision with Doc Bodnar might have been part of the reason Barcia crashed?

Speaking of Barcia, we're hearing he's in for a busy offseason, as the GASGAS team will have a new bike to develop ahead of the 2023 race season.

Yeah, 450 Moto Two will need to be on the list of "Races to Re-Watch This Offseason," too. Eli Tomac's incredible push was easy to follow through the middle of the race, as he clicked off six 2:01 lap times back-to-back and cut Chase Sexton's lead from 5.7 seconds on lap five to 1.1 on lap eleven.

Jason Anderson's Ironman was eventful. A first-turn crash put the Monster Energy Kawasaki in very last on the opening lap of 450 Moto One, but he used the entire race to get back up to sixth place. A fourteenth place start in 450 Moto Two was better than being on the ground, and he charged up to third place by the checkered flag, only to be docked a spot for riding too fast off the track after a mistake. Hit the homepage for an interview with Anderson about his plans for the final round.

Chase Sexton made sure to celebrate his 450 Moto Two win and fourth overall of the summer. This has been a career-defining season for CS23, as he's now expected to be in championship contention for every SX and MX series he signs up for.

Picture is worth a thousand words.

As we wrap up Kickstart and the summer, we wanted to mention how cool it's been to see the fans experience Tomac's farewell to the outdoors. Cheers for ET have been the loudest at every race, especially as he goes for a fourth 450 MX title during the closest points chase in history. We've enjoyed it, too.

2022 Ironman Motocross | How Was Your Weekend
Michael Antonovich August 28, 2022

2022 Ironman Motocross | How Was Your Weekend